At the workshop called “Vesenniy Marsh” (“The Spring March”), the team of Julius Borisov proposed not just a project of renovating the settlement of Staroe Drozhanoye, but a whole new program of its ecological development – tying in ecological and economic considerations.

Archi.ru:
– What do you think were the benefits that you got from taking part in this workshop?

Julius Borisov:
– My educational mission was to get across to my audience that it’s not the beautiful picture of public territory design that ultimately makes a difference. What you need to do prior to design is get a full understanding of what your task is about, learn to be able to explain it to yourself, and understand what specific steps must be taken in order to solve the problems of some very specific people. And this is also the stereotype that I’m trying to dispel in the Moscow Institute of Architecture where I teach. Regretfully, our educational system pays very little attention, if any, to the project needs analysis and goal-setting, and a lot of attention – to graphic design. But you can’t make a difference to people’s lives with drawings alone! That way, you can, let’s say, divert people’s attention from their problems – and then only for a while. 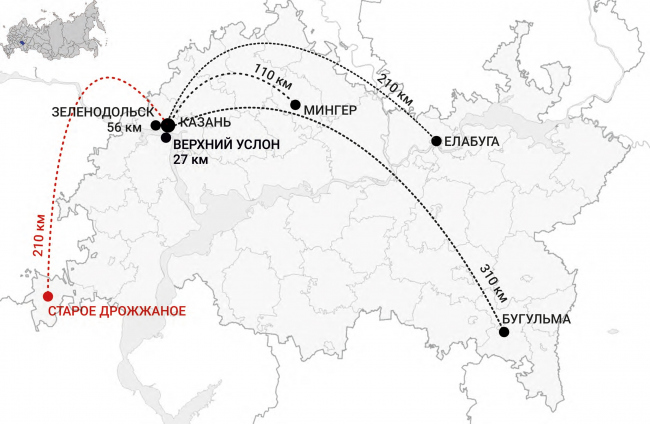 – What principle was the organization of the workshop based upon?

– There were six tutors, and, accordingly, six groups, each of which was assigned its own specific task. These groups consisted of ten to twelve people – government officials, practicing architects, the local “architectural troops” that work on public territories in Tatarstan, and a few architectural students.

– What was the task that your group was assigned to work upon?

– I was given this settlement of Staroe Drozhanoye with a population of about 4000 people, in a remote part of Tatarstan. It’s got the same issues that pretty much every Russian village has: deteriorating environment and out-migration, especially among the young people because they can’t seem to find a way to apply themselves in their home town. Formally, we had a task of developing a town improvement project: the public territories, parks, pedestrian routes – everything that, in the opinion of the municipality, was meant to solve the settlement’s problems. The main problem, however, was rooted much deeper: it was necessary to change the “underclass” status of that settlement.

Currently, one of the world’s hottest trends is the concept of “slow life” when people live in ecologically clean places where they have an opportunity to work online, and where there is a great living environment for adults and children alike. In this country, the value of such lifestyle is still underestimated. And our project was an example of how this situation could be changed. 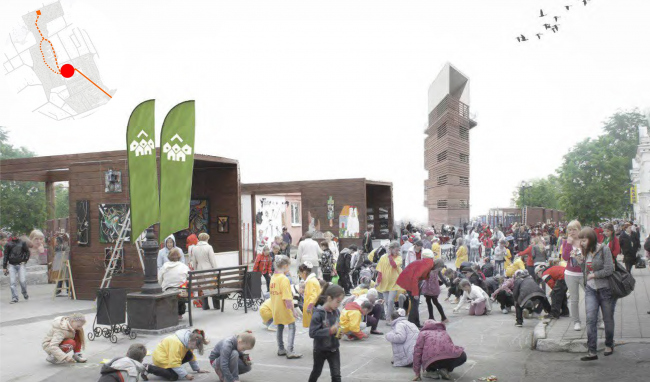 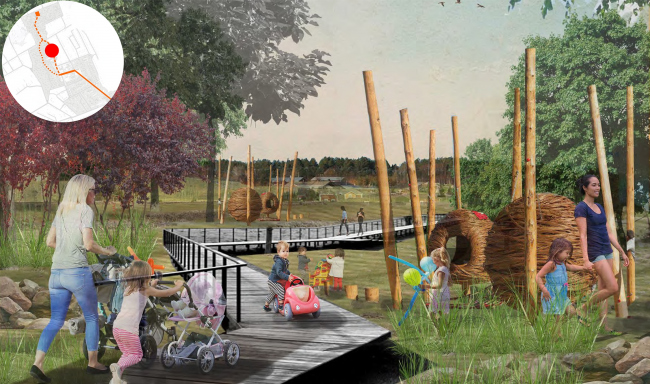 – Did you develop your project together with your audience?

– My role rather consisted in educating and consulting. Members of the audience – and there were quite serious practicing architects among them – did a very thorough analysis. They would go on location, studied the poll information, met with the head of the region that was of great help, and was genuinely interested in the project. As they learned, some serious budgets are being spent: they are building schools, hospitals and fitness centers – but the problem is that these are all independent pinpoint projects, and not some comprehensive system. There is no master program as such – neither conceptual nor municipal. And, because of that, these actions do not lead to the desired results.

As for the second problem, it lies in the fact that, although some industrial grounds are being prepared, there is no clear-cut concept that can be presented either to the city people or to the investors. We analyzed the assets that this settlement possesses. It turned out that its soil is the top-grade black earth, and there are rare natural materials that can be used in construction. So, we proposed this idea of an eco-settlement that produces pure food and pure building materials. Granted, the idea is not exactly groundbreaking but for this region it is quite appropriate, and it has all the necessary prerequisites.

Further on, my team developed a program on how to attract people back to the settlement. We decided to build a center that would demonstrate to the town people and potential investors the future of the settlement, and we decided to build a pilot eco-house surrounded by public territories with educational and entertainment facilities that would show to people just what ecology is about. – How long did this work take, and what are the prospects of implementing these ideas?

– The entire project was created literally within a span of six days. It has already been submitted to the Minister of Construction; the government of the Republic of Tatarstan, and the local authorities have also shown interest. So, ultimately, we got quite a serious result. Maybe the project will not be implemented at once in its entirety, but some parts of it will, and sooner or later we will see the whole of it. I was pretty surprised and even a bit jealous when I saw just how much attention the government officials of Tatarstan pay to architectural actions, and how well they understand the value of the tools with which the architect creates an environment for the people to live in. – Why did you decide to take part in the “Vesenniy Marsh”?

– I have had to make three last-minute cancellations of my scheduled trips to Kazan, the capital of Tatarstan. Until that time, I’d never been there, and I decided that at a fourth try, I must finally make it there and visit Innopolis. Since this is the first city that has been built from scratch in years, it is a must-see for any practicing Russian architect. Second, I’ve been told by many of my colleagues that Tatarstan is a very dynamic region – very little time elapses between something is said, then drawn, and then built. And I had a chance to see for myself that this is really the case. And, third, since I teach at the Moscow Institute of Architecture, I was curious to check out the level of the students, practicing architects, and architectural officials in the regions. This program gave me such an opportunity: the local practicing architects demonstrated a fairly high level of competence, it is quite comparable to Moscow’s, and the students whom we taught as part of the project, have a great desire to grow and quite decent technical skills. Improvement project of Staroe Drozhanoe. The Path of Science and Nature © UNK project 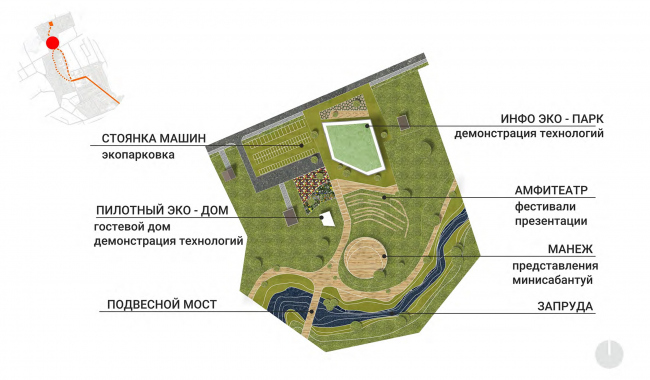