​Living Next to Lyceum

This housing project, boasting a water channel, a landscaped park of its own, and the proximity to the renovated “Imperial Steam Engine Shed”, is one of the three finalists of the competition organized by the client.

In the city of Pushkin (Saint-Petersburg area), near the Tsarskoye Selo museum, a new housing project was supposed to be built. A closed competition for the best proposal was organized with twelve architectural companies participating in it, the whole thing happening within a really short timeframe of a month and a half. The concept developed by Arkhstroydesign headed by Aleksey Ivanov was among the three finalists.

The land site of an irregular elongated shape that looks like a lady’s shoe turned upside down is situated next to the Aleksandrovsky Park with the Ekaterininsky Palace and the Tsarskoye Selo complex. At the south end, the site borders on the Kuzminskoe Highway. A little distance away from its northern border, the Kuzminka River flows. The territory, upon which the new housing project will be built, still has on it the surviving buildings of the old railway station. Still in the late XIX century, this place got the first Imperial Pavilion that hosted the trains arriving to the Tsarskoye Selo. After the fire, in 1911, the place where the burned-down pavilion once stood got a new building designed by Vladimir Pokrovsky. By degrees, it got surrounded by the maintenance facilities that were used for repairing and servicing the imperial locomotives. During the soviet time, the railway station was renamed to become the “Uritsky Pavilion”, and since 1930 it housed the Pushkin Railway Repair and Engineering Works. 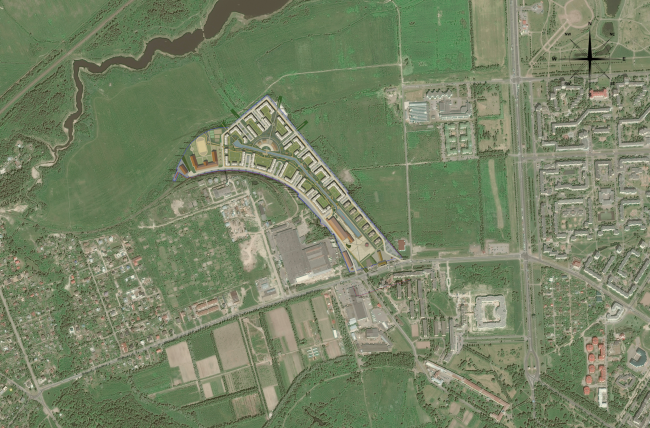 In accordance with the competition brief, most of the surviving factory buildings are to be torn down. Some of them will be renovated to fit the new function. In Aleksey Ivanov’s project, the existing buildings that occupy the entire south end of the site are included into the housing complex being adapted to function as administrative or office centers, while the grand “Imperial Steam Engine Shed” becomes the local community center. 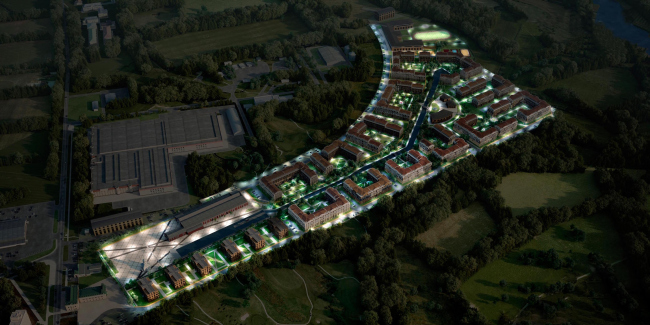 Most of the territory is occupied by the residential blocks that form semi-closed-type little green yards turned in the direction of the central park that crosses the entire land site from north to south. The residential environment is completely vehicle-free, the automobile road tracing the perimeter of the site. The author of the project Aleksey Ivanov likens this ring road to the earth ramp that used to serve as the protector for medieval cities. The parking places also got a peripheral location. This way, the inside environment of the complex gets a maximum of safety and convenience. Aleksey Ivanov admits that the fashionable but used-all-too-often idea of residential blocks still proved to be the best choice for this project and its historical surroundings. “All the master plans developed at different times for Tsarskoye Selo were based on the gridiron plan, sometimes referred to as “Hippodamus grid pattern”, thus keeping up the historical structure – Aleksey Ivanov explains – we took the same path but what makes us different is the fact that we entered the environment at a slightly different angle, which was dictated by the borders of the plot, and the street pattern. The difference was no more than 18 degrees which exactly coincides with the Saint Petersburg grid. So, what we ultimately got was something like the capital merging with the provinces”. Residential area in Pushkin. The channel as a trace of the railway lines. Project, 2016 © Arkhstroydesign ASD

Special attention was paid to the orientation of the project and its interaction with the surrounding context. For one, the main “park” axis of the residential area coincides with the direction of the Moscow - Saint Petersburg highway and opens up to the Alexandrovsky Park and the Imperial Railway Station on its one end, and to the Kuzminka riverbed on the other, where later on a recreational area can be organized. The neat rows of the residential houses, whose height lowers towards the center from six to four floors, are cut in two by a water channel. The channel with landscaped banks, arched pedestrian bridges, strings of streetlights, and elegant benches, very much in the spirit of Saint Petersburg, begins at the walls of the renovated “Steam Engine Shed” and ends almost at the north border of the site. Such solution was proposed by the authors as an alternative to the regular pedestrian promenade. Currently, the territory where the designed channel will run is occupied by dead-end and long-since-abandoned railway lines. According to the plan, these lines will be taken apart, the soil will be re-cultivated, and the channel, that follows their straight line of direction will become the landscape monument to the history of this place. For the same purpose, the architects plan to restore a section of railway line, put it up above the water, and place upon it a repair track machine that was assembled at the Pushkin Railway Repair and Engineering Works during the soviet times. Residential area in Pushkin. The version of the park with a pedestrian promenade. Project, 2016 © Arkhstroydesign ASD The concrete bed of the channel is surrounded on both sides with a green park that is divided into several thematic elements: the children’s zone with playgrounds, the sports zone, the exotic, and the regular park. The pedestrian waterfronts lead to the central semicircular square located closer to the north of the site in its wider part. On the square that is enclosed in the semicircle of trees and shrubs, there are fair tents, a children’s center, and recreation areas. Still further on in the northwest, beyond the border of the residential construction zone, there is an area for the school and a kindergarten. These two have a restricted-access territory and a sports complex of their own. The school functions as a buffer zone of sorts between the residential houses and the adjacent warehouse territory. At the same time, these school sports and playgrounds face the river and the forest providing the students with a great view. The main public territory is organized on the side of the Kuzminskoye Highway next to the walls of the “Steam Engine Shed”. In addition to the renovated historical buildings, it is planned that the broad Cathedral Square will include a small chapel in the pseudo-Russian style, characteristic of the early XX century. Behind it, there is a plot where residential lofts will be built. This fragment of contemporary construction responds to the existing industrial context and enters into a dialogue with it. However, employing its scale and form, instead of the traditional brown brick, the designers proposed to use a more neutral gray-green brick, hand-formed. Residential area in Pushkin. View of the lofts from the park. Project, 2016 © Arkhstroydesign ASD Residential area in Pushkin. View of the residential blocks from the Cathedral Square. Project, 2016 © Arkhstroydesign ASD

Quite a different matter is the residential blocks inside of the land site. They are nothing like the place’s industrial past. At the same time, the modern motifs get along quite well with the so-called historicism. The competition brief required that the new housing area stylistically correspond to the historical architecture of Saint Petersburg which generally did not contradict the block master plan developed by Aleksey Ivanov. However, “historicism” only manifests itself here along the perimeter of the land site. Here, on the street façades of the houses one can see the characteristic classical segmentation, horizontal cornices, pitched roofs, and the three-color palette. The dry historical façades are offset by the modern ones on the yard side – with large window apertures, floor-to-ceiling glazing, deep stanzas, long balcony railings, and the shifted pillars and lintels of the top floors. Each of the blocks has an individual design with little yet quite noticeable accents. Residential area in Pushkin. View of the park and the channel. Project, 2016 © Arkhstroydesign ASD

This combination of seemingly incompatible styles forms a diverse environment based on type-design practice. According to the author, the rationality of the approach, the construction schedule (four stages are proposed), and the type-design are the benefits that make this project quite implementable. Nevertheless, Aleksey Ivanov confesses that he is not really counting on implementation. The project has died down. As is often the case, things didn't go any further than the competition stage.
Text by: Alla Pavlikova
Translated by Anton Mizonov