In this issue, we continue to feature the best projects done by the students of Moscow Institute of Architecture under the supervision of their academic advisors Vsevolod Medvedev, Mikhail Kanunnikov, and Zurab Basaria

As part of their term projects, the 4th year students of the "PROM" department were offered to prepare a "School" project, and not just any school but a specialized institution, such as a school for children with disabilities, a juvenile correctional facility, or a foster care home. This was quite a tall order because the students were to consider the specifics of such institutions, such as the protective envelope and the strict group division of the teenagers in the correctional institutions. This is why the students were to first of all comprehend the special regime and mode of life inside such a facility so as to design its training and production center correctly. Just as complex are the specifics of the foster care home. In this case, the students were to provide not only for the school as such but for the residential premises as well. And it was also quite a challenge for the beginner architects to design the school for the disabled children. The students were to delve into a whole range of rigorous communicational, social, and sanitary specifications.

The design venues were represented by the real land sites in Moscow and its nearest suburbs: the derelict "pioneer camps", the correctional facilities in need of reconstruction, or the unused school or orphanage buildings.

Vsevolod Medvedev, one of the leaders of the team, shared that the line-up of the project was deliberately expanded in comparison with the basic task set by the institute. Apart from the drawings, the students were for the first time around required to make a presentation video that would fully demonstrate the possibilities of their projects. But the most challenging task, probably, was that of understanding, feeling, and trying to make a positive difference in society's attitude to the young orphans, disabled people, and juvenile offenders.

Usually, based on the results of the defense of the students' projects, the professors would hold an internal competition, awarding the prize-winning places and accordingly giving the valuable gifts. But this time it was decided to change the usual order of things: the judging panel singled out five equally worthy works - and these are the works that we feature in our current issue.

Polina Yavna "Nest for the Orphans"

The author of the project sets before her a task of creating the ideal environment for the children that were deprived of their parents' love. As a solution, a bright architectural image is proposed, that looks very much like a bird's nest - warm, cozy, and securely protected from the adverse factors of the cruel world outside. The "nest" association runs through the whole project. On the plan, the building has an elliptic shape. The first floor functions as the peculiar "foundation" upon the circle of which the walls of the school grow leaving inside the large courtyard that rests on the used roof on the level of the first floor. To this same place (i.e. to the courtyard) the architect takes the volume of the gym, and the swimming pool, the latter being smooth and round as an egg. The spiral facades look indeed like the twigs woven into a nest. The likeness is enhanced by the proposal to raise the main body of building, i.e. its third and fourth floors on numerous slender metallic supports and five broad "legs" that will include the staircase and elevator blocks. As a result, the "nest" looks as if it was hanging up in the air above the green hill where this hill is in fact the first floor of the school hidden behind the green facade. 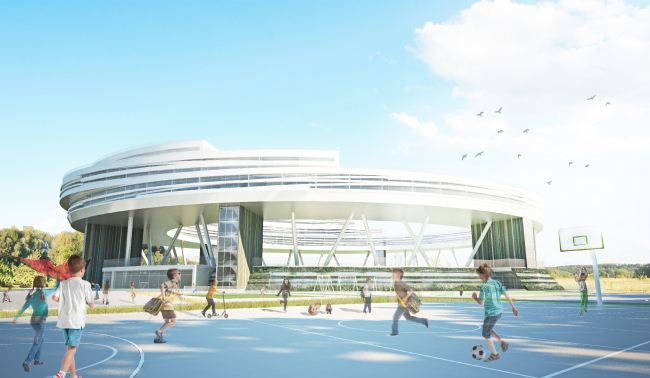 The functional set of the building includes everything that is necessary for comfortable living and successful studies - one will find here the spacious classrooms and student lounges, a separate elementary-school facility, and the spacious cafeteria, and the rest area commanding a view of the city, and the cozy residential area. The courtyard has in it an open-air amphitheater, as well as the game and sport grounds. On the embankment of the Moskva River, there is also a quay.

The institution is designed for deviant children and teenagers. The peculiarity of this education institution is all about the fact that it is not just a school but a place of permanent residence and rehab of the young people.

The complex consists of several interconnected buildings and occupies a rather large territory - which allows for placing all the necessary functions there. For example, the longest building that stretches along the street includes the classrooms, student lounges, and hobby club premises. The entire third floor is occupied by the residential rooms and is linked to the rehab building with an overpass. Yet another volume is designed for the professional training and extra training. 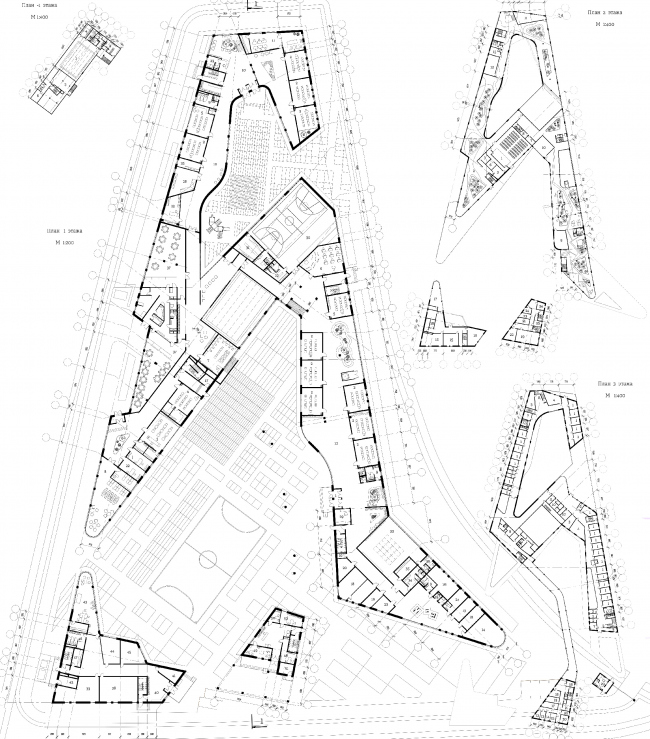 The street facades of the complex are decorated with an openwork grille structure whose pattern is a bit reminiscent of a zebra's stripes. It this sophisticated pattern that "belts" the entire complex that forms its image that, according to its author, is meant to embody the process of positive change and rehabilitation of the young offenders.

The foster care facility is located on the territory of the former Foster Care Home №87 which is now a neuropsychiatric clinic №44. The land site neighbors on the national park named "Losiny Ostrov" ("Elk Island), a residential area, and a few forest ranges. The existing buildings of the foster home will be included into the new complex and then renovated. Yet another two buildings will be built from scratch - they will house the residential premises for the students and the necessary medical facilities. The plan of the volume of the school look like ribbon loosely tied into a bow or maybe two clenched hands which, according to the author, is meant to symbolize tender loving care. The facades are an azure mosaic picture that is composed of the triangular-shaped elements of Venetian blinds. The project provides for all the necessary functions, including the hybrid library, a concert hall, and creative studios. For the very young, a direct exit into the courtyard from the classrooms is provided. The volumes of the studios and the sport nucleus have a usable roof that commands a fine view of the woodland.

The school is designed in the place of the former Polushkino health house located next to the operating city clinic. The perforated facades of the complex create a life-affirming architectural image and protect its interior from the direct sunlight, filling the classrooms with soft ambient light. The array of the classrooms is at times interrupted by atrium spaces decorated with stained-glass artwork of sunscreen glass that also provides for the optimum lighting. The students of this school are children with locomotor system deficiencies; this is why the project includes a cyclic plan of finding one's way around the entire school's territory by using a network of ramps and underpasses that let the kids to effortlessly move from one part of the building to another. The load-per-age-bracket has also pre-calculated: it determined the functional zoning and the planning of the school. The very young, for example, will study on the first floor alone, while the kids that are a little older will occupy the second level. Depending on the age of the students, the height and the length of the ramps also varies - in this project, they become not only a means of locomotion but also a symbol of gradual development and moving up physically and spiritually.

The reconstruction of Atlyatsk juvenile correctional facility in Chelyabinsk Region

As a venue for designing, the now-closed-for-reconstruction Alyatsk correctional facility was chosen in the Chelyabinsk Region. The land site with an area of 12 hectares was divided into two parts: the girls' and the boys'. The center includes a residential complex, the school and professional training center buildings, information center, as well as the administrative and medical block. The single-story has a direct link to the training facility; in its very middle, there is a courtyard covered with a glass roof.

Forming the strict and austere image of the center, the author of the project uses the technique that consist in cutting away these or those volumes from the main bulk of the building. In their stead, there appear either courtyards, cut inside the square stylobate, or the terraces of the residential block, or fragments of the usable roof that are turned into the walking zones for the teenagers living in the maximum security regime in the disciplinary isolation cells.

Along the perimeter of the site and along all the buildings, there are galleries that, according to the author's plan, will, on the one hand, stand for the path that would lead the young offenders and, on the other hand, would help to give the structure an "organized" feel, which is particularly important in the conditions of the strict regime. 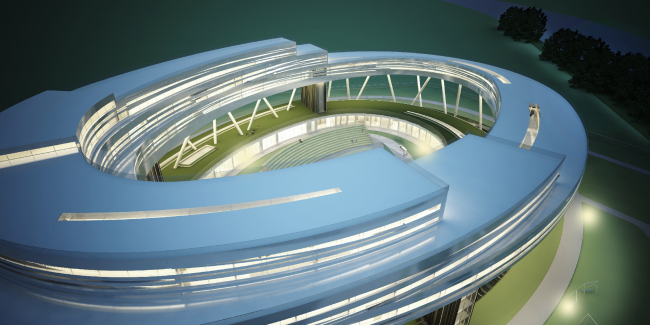