A ship in front of the Lavra

The local developer invited the five architectural studios to take part in the contest: the two from Moscow, two from France and the one from Germany. The site is stretched on the west-east axis, here used to be a border of Verkhny and Nizhny town, so there are a lot of historical monuments around. Apart the Lavra, there is a church of Feodosy Pechersky on the corner, there is a building of caserne of 18th century on the site itself, around there are fortification walls, ruins of entrance gates from one town to the other and square of armory (arsenal). The close location to the last one gave the project its name “Arsenal palace”.

According to the technical task there must be an A+ office centre, elite residential accommodation, most expensive in Kiev, 5 stars hotel and exclusive boutiques. Sergey Skuratov gathered the constructions into a few groups. In the southern part there is the largest hotel-residential block, its outline resembles a boat with a horseshoe-shaped hotel, which is like a snout of ship. This image is very harmonical here on the bank of the Dnepr. The old caserne will become a retail centre, and in the north-west corner there are three towers of the office centre joined by a stylobate with car parking on its roof and a small building of an exhibition centre.

There is no historical layout design of the footware factory, all its constructions are just placed perpendicularly towards the Lavra’s walls. But the authors of the new project turned the buildings parallel to the Lavra. Such orientation makes the light conditions more comfortable for the residential buildings, where most of the apartments have windows viewing the west and the east with splendid views to Lavra and the Dnepr. Besides, there shapes a stretched boulevard main place of which is the church of Feodosy Pechersky. Due to it and the natural slope of the square the church will be seen from afar, despite that the new development is higher than the factory used to be. The development saves the amphitheater of the high bank, so all the penthouses of the residential block have view to the Dnepr.

The authors also solve an urban-planning problem of that part of the city due to their project. Those who have been there remember that though the place is historical it is very uncomfortable for walkers before they get to the Lavra. The new block will be a nice place because the architects and developers denied the idea of an inaccessible territory but included social functions into the project and there almost will not be car roads within it.

The comfort for residents is provided by a vertical division of private and public spaces of the territory – all the residential parts are lifted in 5 meters over the ground creating a second level of the open spaces. This maintains the idea of historical walls which are supplemented with the new difference of relief and get into the common play of the landscape. So, no matter what future the project has (the results of the contest are unknown) – we may say the project gave a new direction in the way developers expand Kiev. 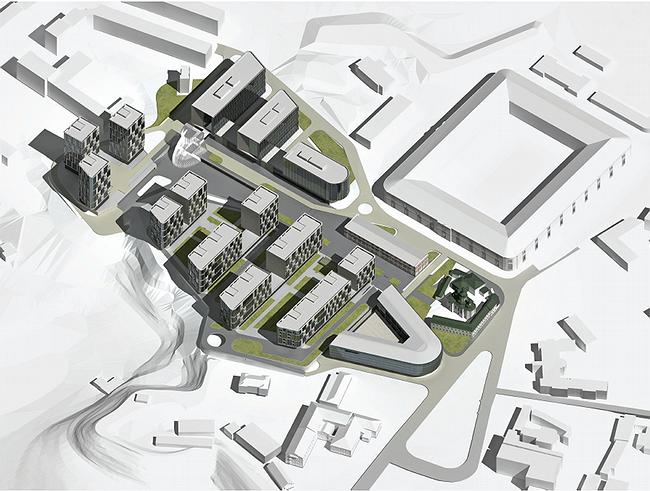 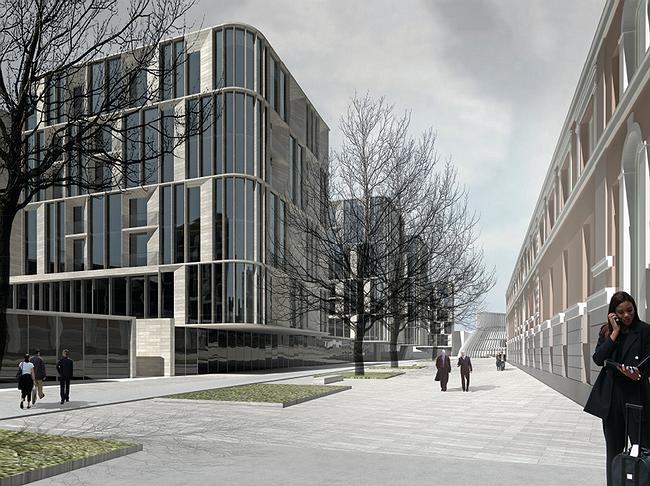