​A Hunter’s Camouflage for a Housing Complex

There are no simple architectural tasks but there are simple solutions. The edge of brilliance.

Driving along the Kievskoye Highway past the Moscow-satellite town of Aprelevka, one will not fail to notice the giant luminous letters “Vesna” along the way. It is the realtor name of the new district built upon the project of “Ostozhenka” Bureau. It is situated south of the highway among summerhouses where there used to be a field. The urban part of Aprelevka, mainly built up with five-storey houses, is on to the other side of the highway. However now, after the installation of acoustic shields it is hardly seen – the cars go inside a sort of a tunnel without noticing the town. Meanwhile the newly built district means a big step of this town into the "dacha" country zone.

However, an urban district was not always planned for this place: “Ostozhenka” has been working on the project since 2009 and then, in the middle of the financial crisis, the investor bought this land plot planning to build a large villa community. However, the boundary of Moscow changed as well as the master plan of the city: now a multifamily housing project is to appear here. The architects were faced with a challenging task: on the one hand, they had to create a dense urban development with a big number of residential houses and all the required infrastructure on a 12 acres area. On the other hand – there was the location of the land plot to consider: it lay practically beyond the city, without any transport, street and visual communication with it. In point of fact, another city without city: with fields, ravines and summerhouses scattered all around… Everyone acts differently in a situation of crisis: some come to a standstill and wait when “the normal life will begin”; others work tirelessly trying not to pay attention to anything. “Ostozhenka” is one of the latter. As a result – crisis or not, old or new city-boundary – but within two months an idea was born that appealed to the authors, the client and the city – it turned out to be akin to the “spirit” of this place.

Eight pairs of residential buildings of a varying number of floors (from six to nine) are loosely placed around the plot. Because of the initial complete absence of streets, they do not follow the geometrical pattern of the “transport network development”. Instead, they follow the movement of the sun and remind dancing couples on their starting points in the middle of a big bright hall ready to start waltzing. Each such couple consists of two L-shaped blocks and forms an almost closed up courtyard, clear of cars and rich in vegetation. The logic of such block designing implies that this is an area for “dwellers only”. The spaces between the “couples” are filled with well-developed and logically organized public places with a system of pedestrian ways, green parks, sport- and playgrounds. And this is a place for “everyone”.

One of the main ideas of the project is the separation of the residential and public areas. That is why it is so quiet on the complex territory: there is no fuss here, no parking or passing cars, no hurrying dwellers running around doing shopping. “Strangers don’t walk around here” – all the active public city life is moved outside the boundary. Schools, kindergartens, the indispensable shopping mall and the parking lots are arranged along the perimeter of the lot, near the new ring road. It is this ring road that allows to avoid the transit car movement on the territory. One of the authors of the project, Valery Kanyashin says that “this ring is equidistant from all every residential house and connects the new district to the city. It was the town-planning base of the project that formed a semi-urban, semi-suburban sphere, wallowing in green”. The solution for the facades fully works with this concept. The architects used Russian brick of two colors as finishing material: dark-brown and light ochre. The spots of the wall patterns smoothly flow into one another as if a result of particle diffusion. They remind hunting ammunition and merge with the colors of fresh reddish soil and pastel autumn forest. It also resembles wooden houses unevenly drying in the sun after the rain and thawed patches in spring and piles of logs. 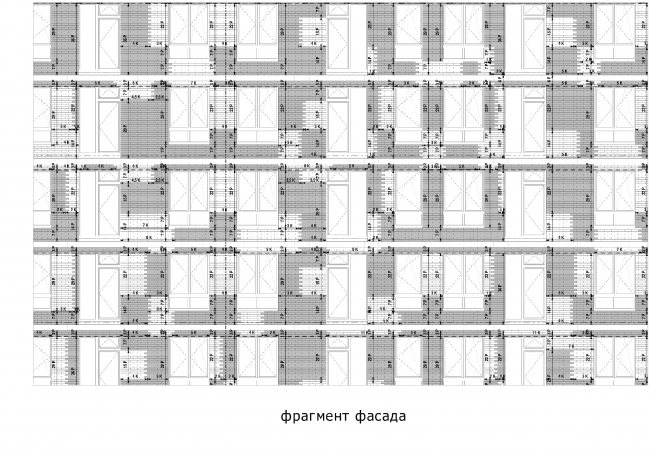 Another element that sets this complex apart from the usual residential construction sets is the trapeze-shaped bay-windows in every apartment, reminiscent of classical glass bay-windows. They protrude from every wall with straight vertical lines-regulators replacing stanzas that were to be immediately glazed by preference, or the terraces of the summerhouses. The apartments are all different but the bay-windows are the same – “they are all equal in the bay-windows!” Glazed from top to bottom, they become the main accent inside the buildings filling the interiors with light at different angles. From the outside their projecting volumes turn the flat wall into a continuous, dynamic, wavy canvas reflecting the blue sky and multiplying sun beams. Only the narrow walls of the “dancing couples” of the buildings have no glass surfaces. Nothing disturbs the “mimicry” hunting pattern here. Such a gigantic spotty “panel” could seem a bit heavy; however, this massive wall, transgressing the law of gravity, is lifted above the ground to the ground floor level and is placed upon a metal V-shaped support. One must admit that this new district – a semi-city and a semi-suburb – does not create an impression of heterogeneity in the panorama. Had there appeared a line of white-brick towers instead of what we have here – monumental and far from wildlife mimicry – the impression would have been totally different.
Text by: Alexander Skokan, Valery Kanyashin, Alla Pavlikova
Translated by Anton Mizonov 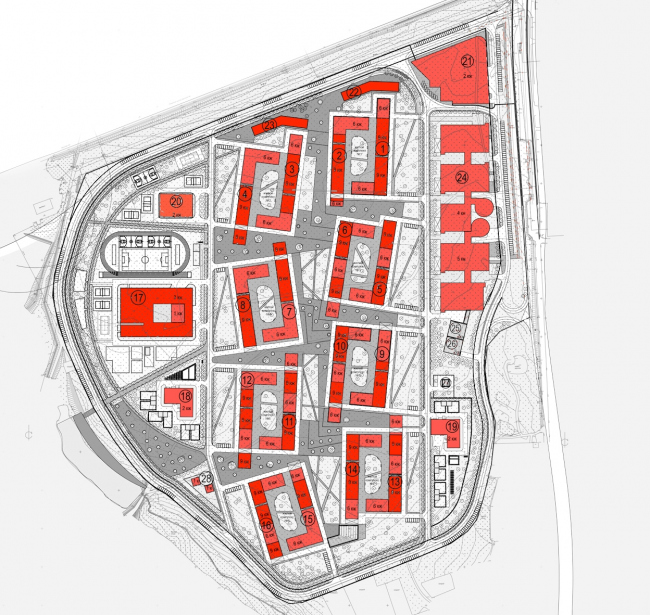