The new administrative business centre, recently built on Malaya Dmitrovka by Pavel Andreev’s project, is modestly hiding behind the historical building of the 19th century urban house and it does not break the present facade line of this old street

At the start of Malaya Dmitrovka, not far from the cinema “Rossia” [Russia] and the gorgeous Rozhdestva church in Putinka, by the giant 1970’s “chest” of MGTS, facing of the new business centre, built by the project of Pavel Andreev’s studio, is almost finished. But anyone, who has no idea about that and is hurrying somewhere along Dmitrovka – no matter, by car or on foot – might not notice anything at all. Only can gladly notice the two small, but typical and nice Moscow houses of the end of 19th century, have been renewed but not tore down. The houses look fine – almost radiate, and the new building of the business centre is not visible at all, only if you do not look it purposely.

When you find it, then it appears to be quite large – a huge Г-shaped construction of modest architecture and elaborate configuration stuck to the two “old” buildings from the yard side. To have a full picture of the new development, one has to walk by at least the three sides of it, going into the yard, then going through the neighboring yards. The business centre has just grown within the various Moscow development and have done it so smartly that it can easily be taken for a few different constructions. There came out nearly 15 thousand new square meter, and it is not clear where and how. Well, those are wonders of mimicry that is necessary for construction in the centre of a city – the new development does not at all stylize the surrounding, and does not change it’s almost absolute contextualism.

Actually, everything is more complicated. The business centre, which project has been started four years ago, got the two sites –- vladenie 7 with a 2-storey commercial house of 19th century and vladenie 9 that saved the “main house of urban manor of eclectic period”, the building in a way superior than its neighbor, decorated with pompous, but fine stucco work, built in the end of 19th century. The both buildings have been renewed (the “Marss” company was engaged in the work according to the project by the restorer Grigory Mudrov). The leaned risalitas of the building 7 have been leveled, flooring have been changed; stucco work of the building 9 has been cleaned and renewed, interior has been partly restored, in particular the iron staircases. Must notice, the stucco work on the building 9 looks excellent.

The most noticeable part of the new building is joined to the building 7. Here, in the gap between the former commercial house and the giant building of MGTS is seen a dimly shining ceramic granite corner – or rather a number of various rectangular volumes topped with a kind of lift tower. As if all the sculpture of the house folded into the yard could not stand its loneliness and pulled into the single gap all it could to trying to show itself.

The most remarkable element of the facade of the new building – metal panels covered by rows of considerably extended horizontal oval ribs. If glance there they resemble popular in present-day Moscow lamels huge exterior jalousie – thought they are not at all. There arises an illusion – if take it wrongly and think they are lamels, windows seem to be much larger then they really are. The extending risalita for example might seem to be entirely glazed and just covered with metal stripes, this intrigues the audience and maintains the hi-tech effect.

Then, making way through the yards, we discover more modest facades – there is more ceramic granite, less glass and the ribbed hi-tech decorations. Walking around the house we see how its outline fancily, stepping, retreats or becomes higher. The gap is not free and its aim is not to complicate the outline, but it has to satisfy the standards of insolation – in other words, not to obscure windows of the neighbour residential building, at that providing maximum of floor space (nearly 14 000 square meter) – tells Pavel Andreev. The thing is, in the buildings 7 and 9 on Malaya Dmitrovka there were the two health centers - psychoneurologic and dermatology. They were transferred to the new building right of the same number of square meters – so on Dmitrievka it was necessary to “have” the same volume. Its stepped outline visibly demonstrates the “stoned” process of struggle between the needed flooring and the urban restrictions.

If come from Degtyarny Pereulok, we discover “stone” walls, crowned with angular roof of transparent metal constructions. But the walls go apart showing a trick – huge, a storey-size glass steps, a kind of glazed cascade. This volume appeared in the respond to the present renewed arch of the 19th century house. From the street through the arch (certainly if they will open the iron gates) you can get into the inner yard. And from the other side on the entrance into that yard points the described glass volume. Though, frankly, walking around it is impossible to guess there is a yard, if you do not know about that. In the yard there will be flowerbeds and benches. Well, this is the mysterious Moscow business centre, a huge one, so harmoniously hidden before the historical development. 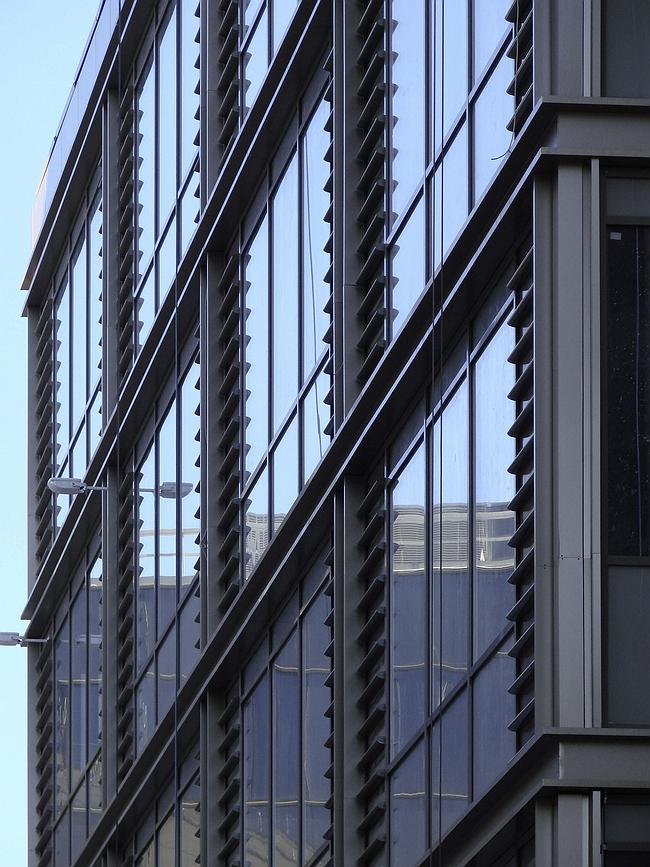 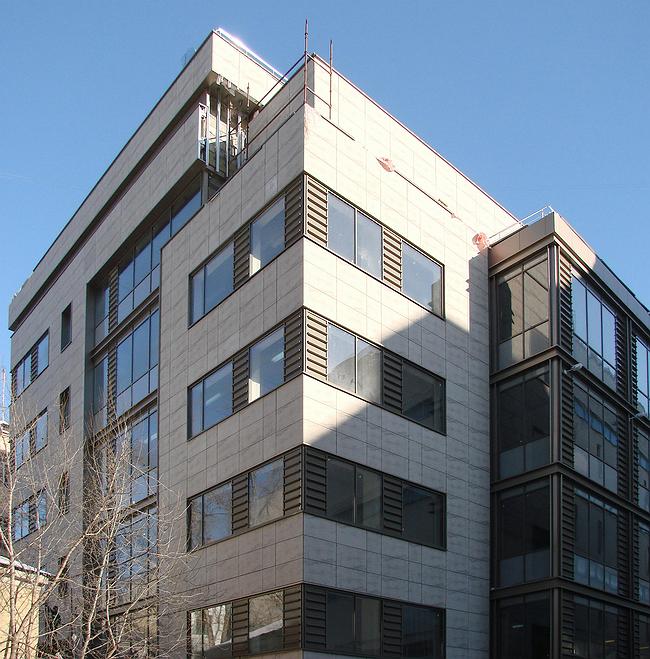 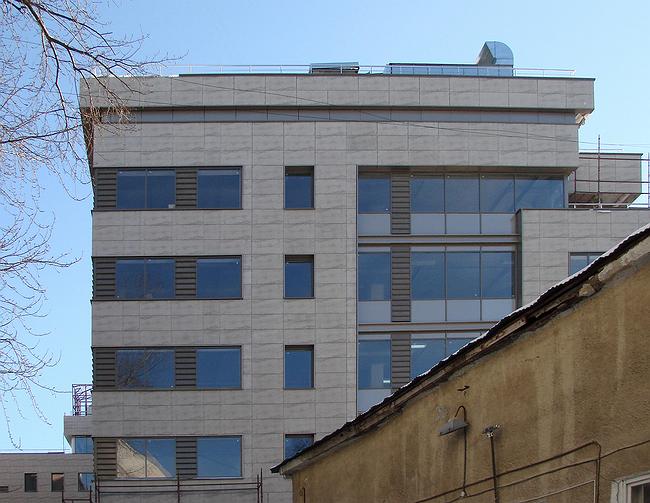 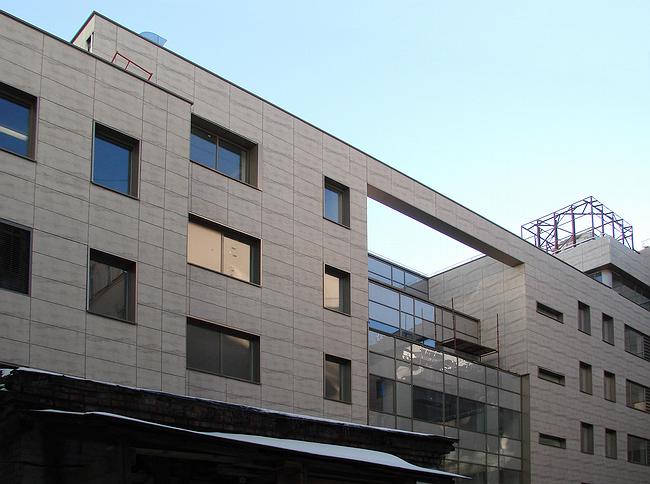 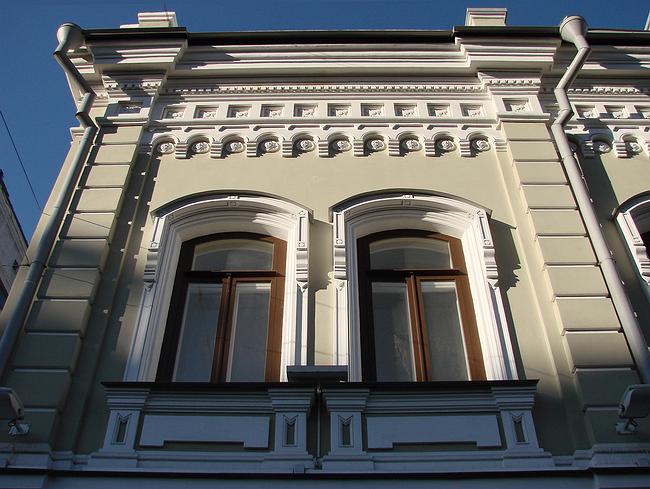 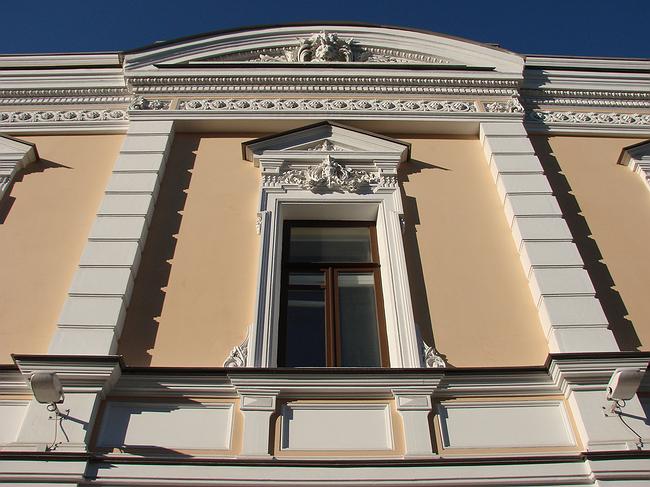 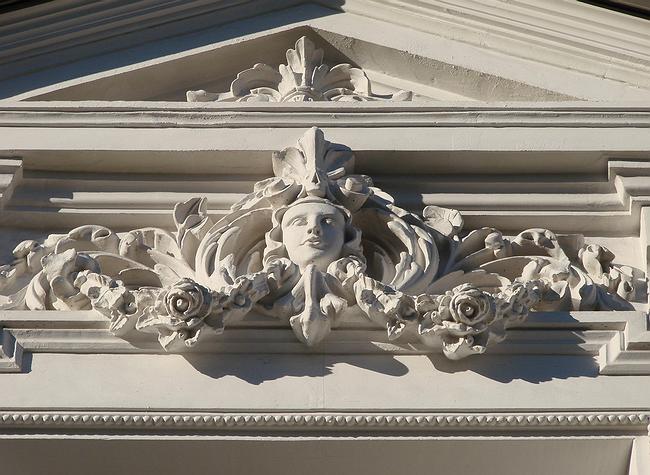