The studio “Aleksandrov and partners” designed project of an elite business-park with A and A+ class offices, which will be 11 km from “Baltia” route, nearby Rublevskoe highway. The project, considering high level of comfort, plans an incompact development with wide greenery zone and cascade of lakes. The required number of square meters will be gained due to setting the two high dominants– 21 and 25storey towers – into small-buildings composition.

In recent years business parks have become more popular and not only because the mayor of Moscow forbade office construction in centre of Moscow. This typology that resembles a “business town” is aimed at large renters – strong companies that can afford renting a whole building and arrange their offices there. Best of them are surrounded with greenery and may boast of advanced infrastructure – in other words, clerks think a good business-park must combine comfort and ecological surrounding. In our country this type of office construction has just been developing – about “Krylatskie Kholmy”, a Moscow business park, which was among the first of the type, designed by ABD architects, we have already told.

Today Dmitry Aleksandrov’s studio is designing a new business-park nearby “Krylatskie Kholmy” and for same client – CMI Development. The nearest neighbor is the future residential area “Rublevo-Arkhangelsky”, the former “Town of millionaires”, that recently has got the status of federal residential program, in the project of which is also engaged Dmitry Aleksandrov. Not far there is a complex of buildings of Moscow oblast government built according to Mikhail Khazanov’s project. So, the new business park with the nice name “Baltia” will be a “business buffer” between the residential area and administrative centre of Moscow region.

A month before “Aleksandrov and partners” offered the client three variants of future business park concept-project – the architects were surprised when the most extravagant variant was chosen. On the broad 6 ha territory with seemingly chaotic rectangular glass buildings spread at different oblique angles. The outmost corner spots of the territory are “fixed” by the two towers – the highest, 25storey, will meets cars coming to Moscow from the region. In the north part, from the Capital side there will be the lower tower, 21storey.

Must say, first, one of the client’s requirements was the small storey development: the complex would be more compact then and more evenly spread about the territory. And the towers made it possible to focus in them the necessary square meters and make room for more greenery – the “park zone”

Here will be a true park. Cascade of four artificial lakes will stretch diagonally through it. Their presence, especially in such “cascade” volume, gives the business town an unexpected similarity to some country estate near Moscow. Like, it is being built in the place of an old park – but hardly so, the ponds will be new, nothing have ever been there except for the roadside grass and the forest. The existing fragment of forest that like a triangle “plug” breaks into the site borders will be saved and developed. Lawns with trees will be added – in total green zones will occupy no less than third part of the territory. This obvious ecological luxury (quite logical for country estate) has at least two explanations: first, the mentioned towers took most of the considerable sum of squares and made possible leave much vacant space. Secondly, two gas lines of high and medium pressure go through the site, and there construction is not allowed.

Lines of main roads together with visual relations influenced the outline of the future business centre, which mentioned earlier loose composition is not occasional. The arrangement was determined by crossing of the two nets, laid one onto another – say the co-authors of the project, Kseniya Kanunnikova and Anna Vartapetova. One “net” includes inner car ways and is strictly perpendicular to the highway and divides the site into four large rectangular. The other one, laid upon it diagonally repeats the lines of the artificial ponds, park paths – and also it lines the wall contours of most glass constructions. Where the nets work together, the outlines of the buildings get popular asymmetrical irregularity: the layout of the highest 25storey tower becomes five-cornered.

All the glass constructions will be joined by stylobates in which there will be parkings and various public zones: café, fitness, shops and rest. Exterior walls of the stylobates will be partly closed and in parkings partly open, penetrable and ventilated, covered with metal gratings. On the roofs of stylobates there will be small gardens with trees – in addition to the main green massif, grouped around ponds.

Volumes of stylobates have another important objective: in northwest part of the territory they get into one broken line but almost continious, isolating the business centre from various beauties of nearby cottage settlement. Clerks and visitors of “Baltia” will see the forest, ponds, glass and metal of modern architecture. And probably they will live in “Rublevo-Arkhangelskoye”. 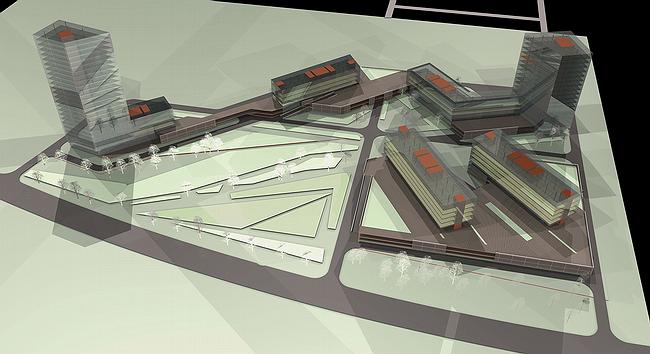 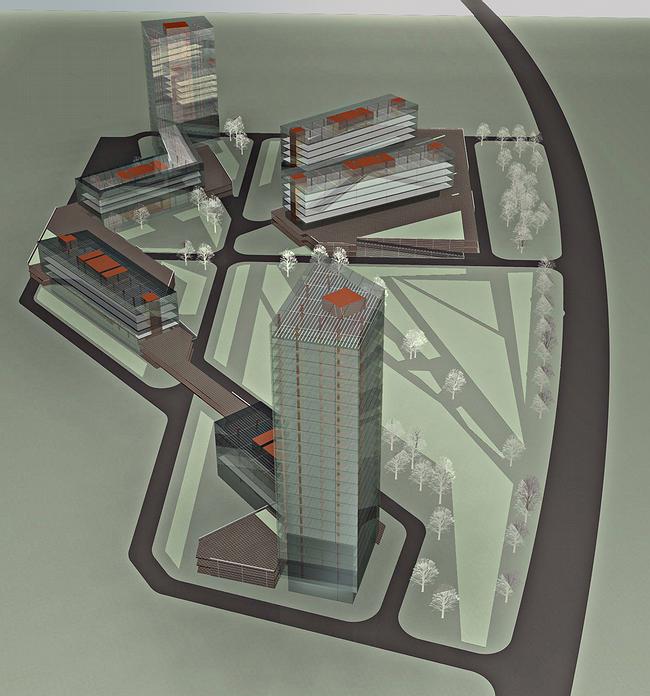 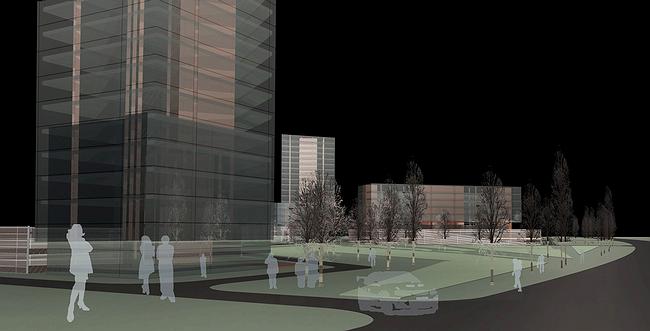 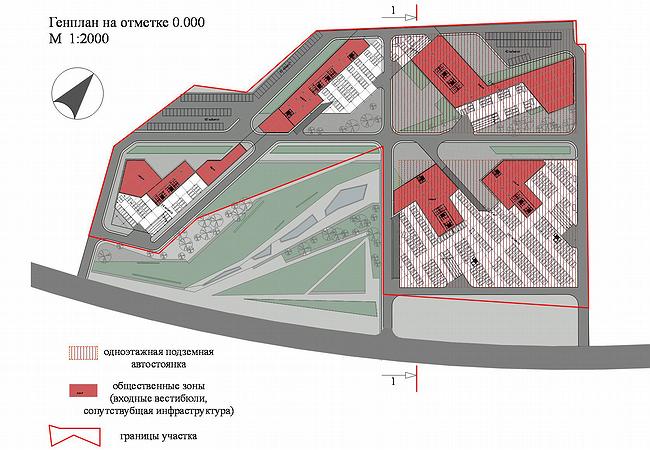 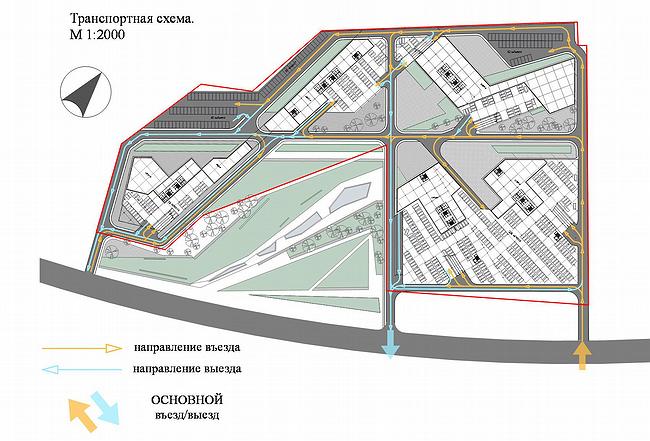 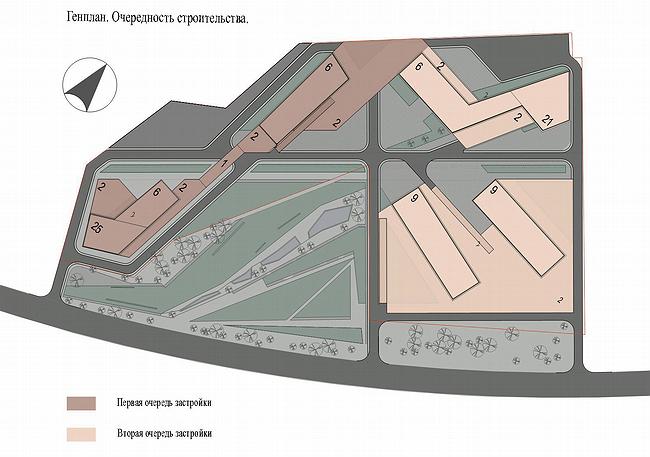 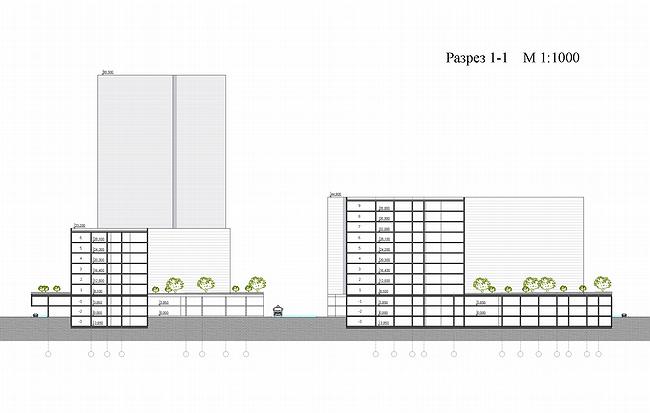