Meditating on the subject of how the new Parliamentary Center of the Russian Federation might look like, the team of architects headed by Alexander Asadov and Karen Saprichyan proposed to build, within the framework of Moscow City, a building with a golden niche on the main facade and a giant sphere of the congress hall suspended inside of it.

For the record, we will say straight away that this project will not be implemented - it relates to the list of experimental developments that our authors are so fond of. Their portfolio has in it quite a few of such proposals and concepts - the kilometer-tall TV-tower or the recreational complex "Mirax-Garden", so much remembered by many people. The architects themselves call these projects "Alternative Moscow", appreciating the opportunity to let their imagination go free in terms of how the Russian capital might have looked like, had it not been for the ball and chain of the construction restrictions and other limitations. As for the customers, they, in turn, fully appreciate Alexander Asadov's readiness to think out of the box and look into the future (of this particular city and of architecture in general) with optimism, and this is why the architects get such proposals on a regular basis. This time the "alternative reality" theme came in the form of placing the in the place of the unfinished building of Moscow Government in .

As the architects themselves explain, this idea came up last fall, at the point when it became clear that the territories of the "New Moscow" are not ready, in terms of their infrastructure, to accommodate for the large numbers of federal agencies. As is known, the Deputies of the State Duma were also against moving beyond the confines of the Moscow Ring Road, and thus the capital started searching for an alternative site for the . One of the options was duly represented by business center where a large site is still lying idle - the one that was once allotted for the construction of the capital's city council. Actually, the city council building has been partially erected (the construction work died down back in 2010, first because of the global crisis, and then it stopped forever because the city council opted out of moving to the new place at all), so, as their starting point, the architects got quite a specific task - make analysis as to whether this suspended construction could at all be finished to fit the needs of the federal power. The architects were to make it into the existing construction blueprint, engaging the already-built underground part of the complex, and at the same time they were to design a building that would be simultaneously spacious and dramatic-looking. The construction site of is quite familiar to the Asadovs. Back in 2003, they took part in the tender for the building of Moscow City Council, and in 2004 they designed, in a nearby area, a high-rise business center in the shape of a tower widening out at the top and "giving birth" to yet another building. Returning to the site ten years later, the architects deliberately chose a different tactic proposing not the vertical centerpiece but a dramatic composition of "volume within a volume". “We opted out of designing a skyscraper for a whole number of reasons - Alexander Asadov explains - First of all, there are far too many of them in as it is: in the cityscape this district looks like a stockade of verticals, and it really made no sense adding yet another "pole" to it. And, second of all, the very functional program of the designed center made us create several volumes - due to the fact that this complex was to unite the upper and lower Houses of Parliament".

What the authors do is assemble the from functional blocks of various shapes and forms. This looks like a game of 3D Tetris of sorts in which blocks of a simple rectangular shape form independent buildings of the State Duma and Federation Council, while the S and П-shaped links form the premises for joint work of the deputies and the members of the Federation Council, as well as the various auxiliary services. As for the car park, it is completely isolated as a separate "brick" that is set against the main building from behind and is connected to it with a covered passage that serves as the continuation of the main lobby. The first six levels of the complex are allotted for the Library of Parliament - this, according to Alexander Asadov and Karen Saprichyan would not only be convenient for the government officials but truly symbolic as well - the common basis for the work of both houses would be the law-books. Besides, the square configuration of the original building ideally served to accommodate the library that, to be quite straightforward about it, least of all needs any experiments with its shape and layout. As for the structure that the architects place on top of the library, it looks nothing like the classic skyscraper. Rather, it looks like a window or a window frame: off a square-section tower, the authors take away most of the corner that faces the Moskva River, as well as from the opposite corner, and then they embellish this niche with a deep horizontal slit in such a way that the building "looks" at the Bagration Bridge not with a massive dull facade but with a graceful niche. The unusual form of the opening is also enhanced with its coating - the niche is finished with metallic panels of copper hue and glass of a similar shade. The main adornment of the niche, though, is not even its golden lining but the egg-like volume inserted inside of it - these are the the convention halls, one for each of the houses, and a common one. If we look at the from the embankment we will get a complete illusion of this glittering flattened ball simply hovering in the air having miraculously found itself under the cantilever of the Federation Council block. The architects go a long way to maintain this illusion: the covered passage that leads to the main building is designed in such a way that it is not to be seen from any angle, while the supporting poles that prop the sphere up from below are masked by the appropriately set trees and the metallic-glass coating. 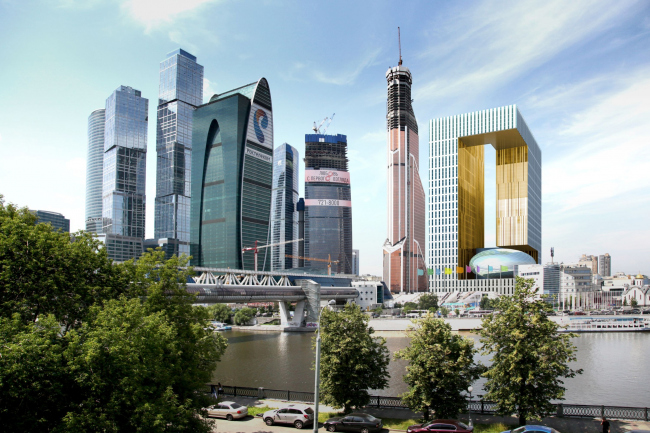 The height of the upper link that in fact makes the building look like a giant window and connects the two towers into a single whole, is three floors. Here the authors were planning to place the offices of the support staff of the chairmen of the State Duma and the Federation council, as well as the representatives of the Chief of State. This is also symbolic: the ruling power structure is placed at the very top having, just in case, a few helicopter landings handy. Oh, by the way, about the fire prevention measures: the laconic finish of the facades and the windows that are arrayed into thin vertical lines (at some places in pairs and in some places as "stocks" 5-6 floors high) completely conceal the three technical floors that allow, if necessary, for complete isolation of the library, the premises meant for the joint work of the Deputies and the members of the Federation Council, the fractions of the State Duma, and the committees of the Federation Council, as well as the top echelons of power. In front of the building, the architects make a small square that is accessed from the Krasnopresnenskaya Embankment by a wide staircase. All this put together - the plaza that is elevated above the river, the glittering zeppelin hovering above it, and the frame of the high-rise golden on the inside, endow the Russian Parliament with an image that is bright, and, possibly, even too "progressive". 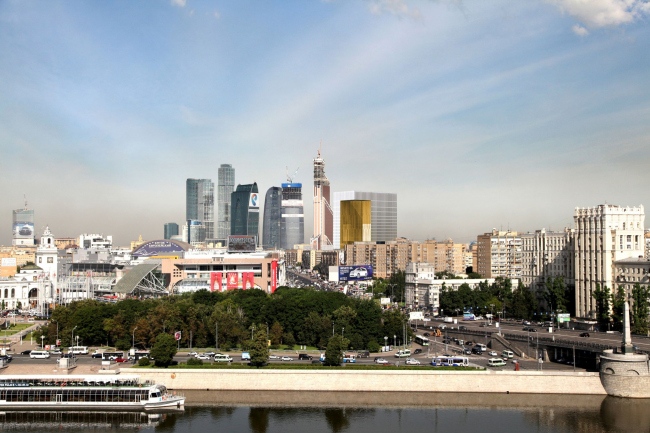 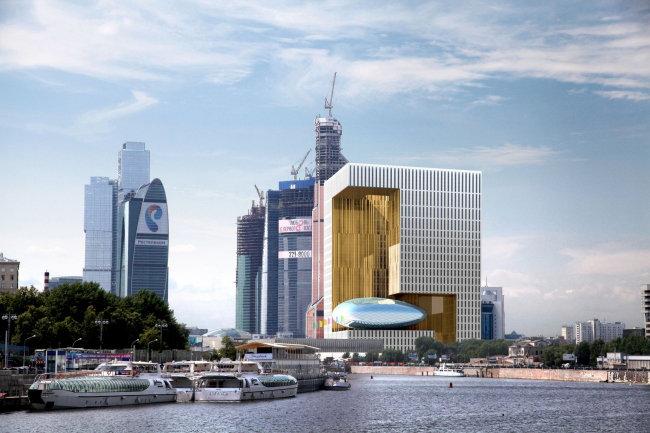