Over a year ago, the architectural bureau “City Arch” completed the construction of a three-star hotel “Cariboo” in Beloyarsky. Named after the animal that symbolizes the fauna of the Khanty-Mansiysk region, the hotel even looks like a stately deer.

Beloyarsky and the “City Arch” Bureau have a long-standing relationship. According to Valery Lukomsky, this is a happy case, when the architect has found his customer, who fully trusts the professional taste and skills of the author, and the customer has found his architect, who makes his wildest dreams come true. The cooperation between the bureau and the city administration began back in the late 90's. At that time the architects implemented a whole galaxy of objects in Beloyarsky. The list includes the residential area “Sportivny”, districts 4 and center for children and youth, a swimming pool, an ice palace, the building of the City Board of Education, an office building, a temple in honor of reverend Seraphim of Sarov... For a long time, however, the growing town did not have a hotel, and when in 2005 Valery Lukomsky suggested the idea of building a hotel to the mayor of Beloyarsky, the latter supported his idea with enthusiasm.

The location of the future hotel was also chosen by Valery Lukomsky: trying to place the only hotel of the city in a most convenient way for its guests, the architect proposed to build it on the square that closes the prospect of the Central Street. By the way, this is where “City Arch” built a center of specially protected natural territories “Nuvi At”. The high-rise volume of the hotel with its two wings spread in different directions is almost adjacent to the museum, and thus completes the spatial composition of the square.

And if the composition of “Nuvi At” was based on the two most striking symbols of the customs of the indigenous peoples of the North – boat and tent, the architectural image of the hotel refers to, perhaps, the most well-known animal of this severe land – the reindeer, which is translated into Khanty as Cariboo. The curved elastic arch of the rear facade facing the Kazym River, on which the city stands, reminds of the proudly bent neck of a deer, and the decorative construction, crowning the high-rise part of the complex symbolizes its antlers.

The high-rise section which is represented as a triangle with rounded corners, stands in contrast with the sprawling, horizontally stretched out wings of the building, embracing the square on both sides – they protect the area from the north winds blowing from the tundra, which is important not only to the urban planning, but also a practical point of view – the area is planned to be used for various city events in the future. In the volumes flanking the hotel, there are the first and (so far the only) spa, restaurant and bar. The name of the bar – “ChumBAR” – is entirely due to its architectural design, reminiscent of a traditional dwelling of the northern peoples (from rus. «чум» [chum] – tent). The building faces the central street, that is, the south, with fully glazed main façade and the cylindrical panoramic elevator. The hotel is the tallest building in Beloyarsky (its height is ), and it rises above all the other buildings, so that the elevator overlooks the entire city and the surrounding tundra.

The project of the hotel was developed back in 2006, but construction was indefinitely suspended at the stage of a built up monolith due to the crisis of 2008. At that time, by the way, the project contained various energy-saving technologies and materials, but later on, when the construction was resumed those were abandoned for the purpose of economy. Yet the building was finished, and in a fairly short period of time, although work in the tundra presents severe challenges. The above-ground part of the building rests on the three-meter driving piles that pierce through the sand pillow and set against the permafrost.

Due to its position and the dominant volume the building of the hotel forms the urban environment not only the given area, but the whole city – it creates new scenery spots, sets the perspective and serves a significant accent of this flat-bottom land. The memorable appearance of the building is achieved not only through its form, but also the finishing. A variety of materials are used: for example, metal with a rusty patina, the color and texture of which is reminiscent of a deer fur; or red pine trunks and marsh grasses, with which fragments of the facade are faced. According to the architects’ idea, “Cariboo” symbolizes the natural contrasting with the industrial challenge of civilization, embodied in aluminum and titanium-zinc Rheinzink coating of the roof.

Now that both the center “Nuvi At” and the new hotel are put into commission, the architects are working on a project of the accomplishment of all these buildings adjacent to the site – another “Arch City” project is organizing an ethno-park and a walking area here. This project helped link the city and quay of the Kazim thereby relieving acute shortage of recreational areas in Beloyarsky. 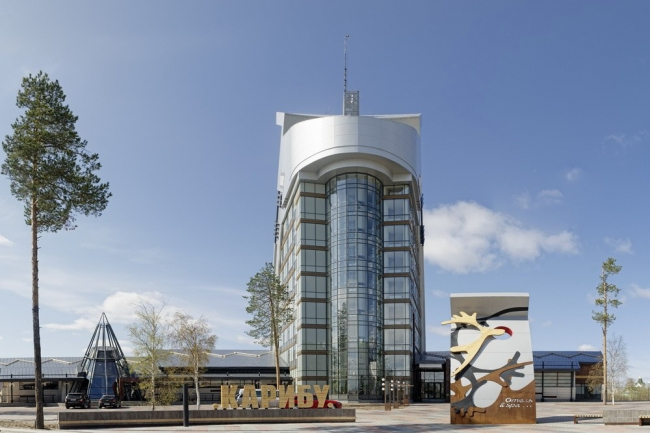 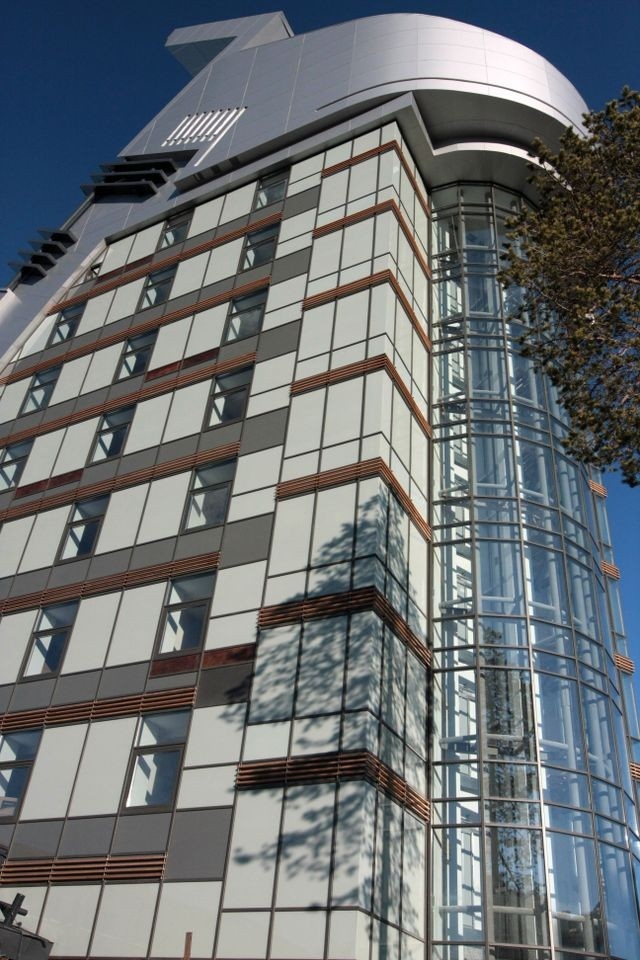 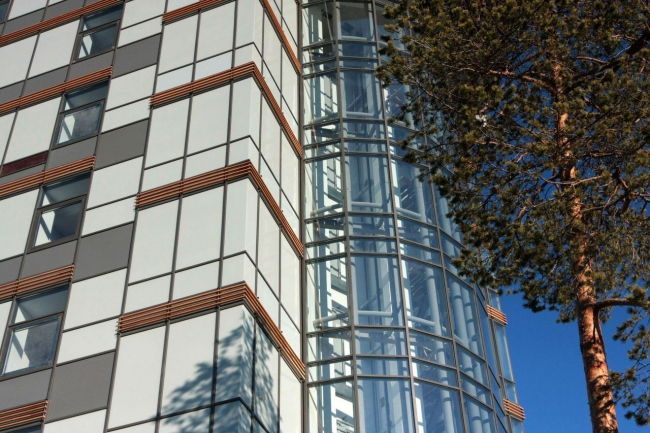 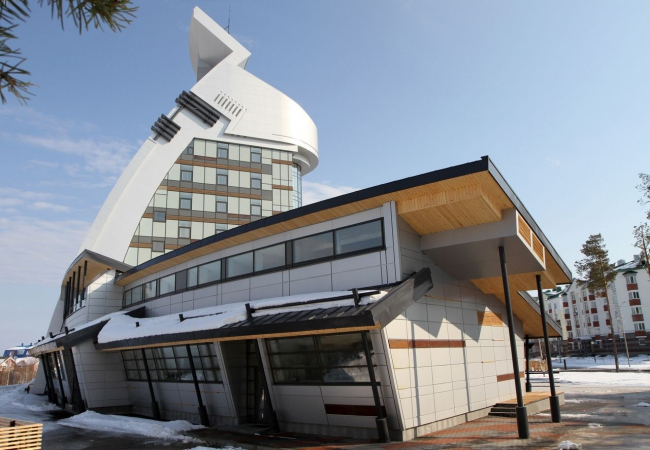 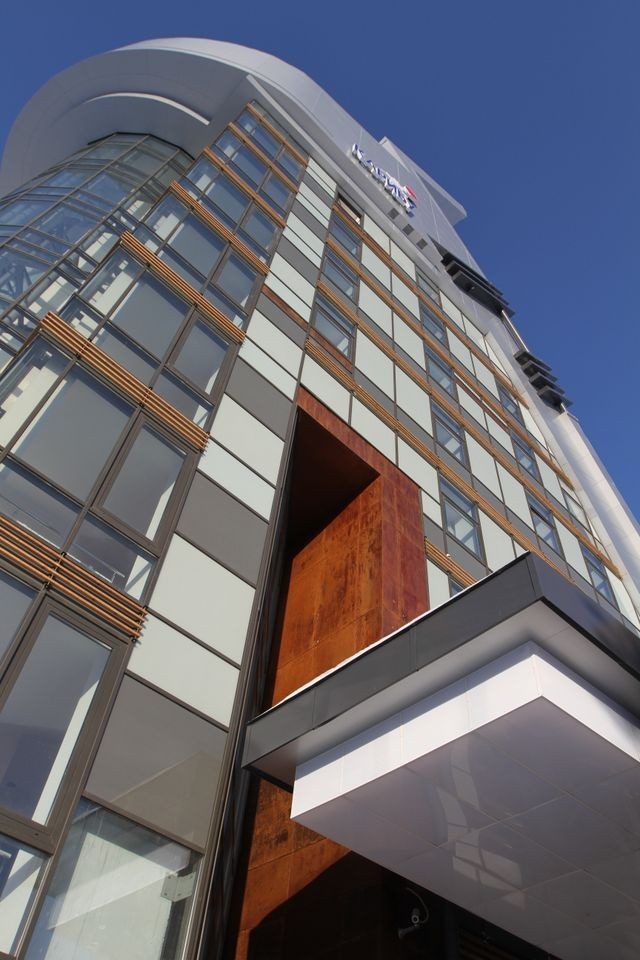 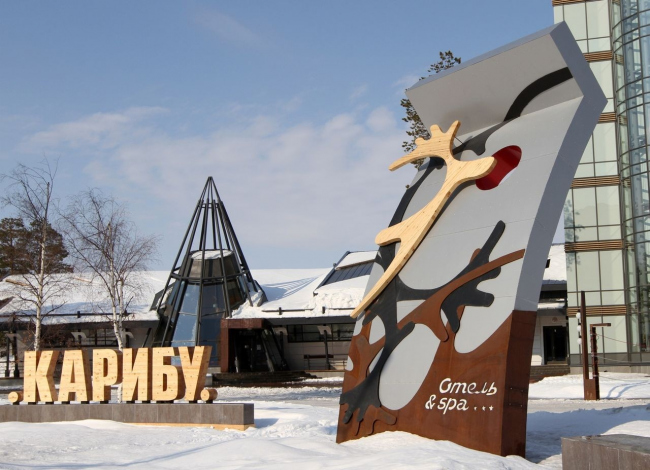 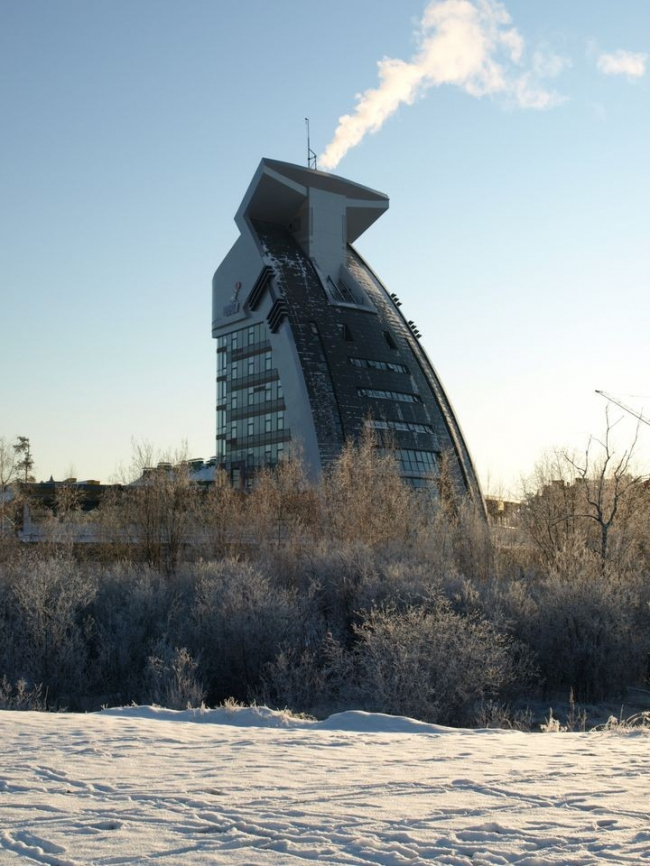 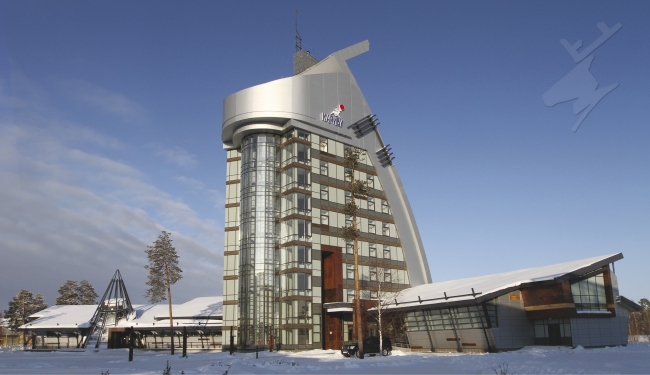 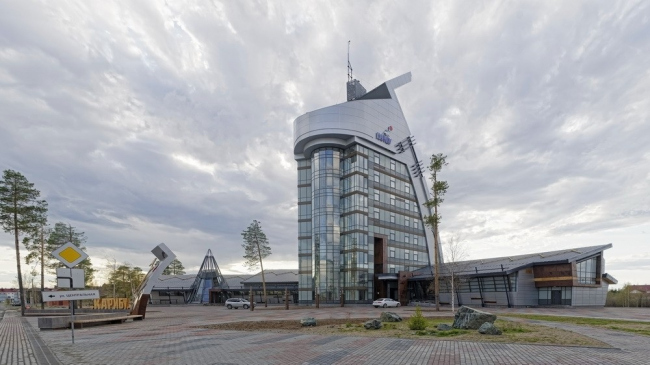