It is well known, it was held by the head of the department of Presidential affairs among Russian architects and also among architects from other countries. We have already described this unique for architectural contests event – but would like to make a stress that here now we have got high level, even of federal status, results of the first contest.

The new building of the congress-centre is to be to the east from the Konsantinovsky Dvorec [Konsantinovsky Palace], to the north from the Academy in the name of Makarov, and is separated by the so called Konsulskaya derevnya from the bank of Gulf of Finland – the line of identical palace-cottages, designed by E. Merkuriev in 2003. In total, the surrounding is quite various, from one side there is monument of 18-19th century, not classicism but baroque, and from the other side there is a modern building of the Academy, surrounded by a park, partly regular French, partly just grass. Distantly is water, but in front of it there are rows of numerous cottages, that also need special architectural attention – what to say, they are buildings.

In answer to tricky requirements of the project the studio of Dmitry Aleksandrov found a peculiar contextual idea, a “double” one. Since the closest historical surrounding is so various, the authors appealed to the history of St Petersburg and thought about Peter’s bastions. Really, a bastion in 18th century was strictly of functional value, and had no chances to argue sculpturally with a baroque palace. But for us nowadays this is a very romantic theme, it reminds of Peter’s deeds, like in many movies. Besides, a bastion is an earth structure and now it is quite natural to earth it, and this takes us to the second part of the idea – natural. Not an ordinary bastion, but green. The last may mean either this construction is ancient and has grassed over, or, on the contrary, this is a modern building, ecological and hidden, does not disturb precious Strelnya’s landscape. Must notice, the both comments are true. Mossy Peter’s bastion on lowland before the Gulf of Finland – such a picture settles a problem of context: it is unnoticeable (almost unseen from water), historical, green – it doesn’t just fit, but earthed with lower levels. And the main is that in the end this picture with its abstract ecological historism leaves no doubt it belongs to the 21st century.

Generally, the project is like modern “painterly” landscape park, which yet considers the neighborhood of the regular French park, so called Nizhny Konstantinovsky. Petr Kholkovsky, one of the authors, said that due to this neighborhood there appeared straight lines, without curls and roundings.

Another peculiarity of the project is that the authors didn’t follow the contest task or did more than it asked, adding the building functions that were not in the list. Paradoxically, the authors are sure that they got the 2d award not despite the breaking the rules, but due to that.

The key moment in inconformity to the contest program is that the authors made the complex truly multi-functional, considering the way this giant construction might function in periods between grand international events. The architects suggested ‘culture’ – a Centre of Modern Art, and ‘sport’ – a yacht-club and ice arena, and also a hotel for 400 places. To attend a cultural or sport event one may get there by water – from Pulkovo and St.Petersburg and by land – Tallinskoe highway.

It was quite a bold and risky decision to put congress-centre and a yacht-club in one complex. But it is quite reasonable, taking into account the sea is close at hand and there is connection with it through canal in the name of Makarov. So, here goes another break-of-the-rule – division of the reception part into the two blocks: for land and sea transport. The convenience of the division is that gusts might enter the complex on yachts, then leaving them in special docks.

The center of the Modern Art joint to the congress-hall is a trapezoidal rampant system quite like Solomon Guggenhaim Museum, it was built as an alternate to basement exhibitions of Konstantinovsky Palace, where goes the famous collection of Rastropovich..

Another break-of-the-rule from the contest program is that the Sea Restaurant, supposed to be in the main building, is placed in the site, and due to the thoroughly selected view points, there opens a wonderful picture of Gulf of Finland, leaving aside not that nice Konsulskaya derevnya’s houses.

All other terms were strictly followed, this is reason why some elements are structurally like of other participants’ projects, as well as the winners’ (project of A. Kupcov and S. Gikalo). For example, the main block of the construction – congress hall – is a 3-level system with a few variants of transformation. Chamber hall’s design is classical, with standard places it is over VIP-hall from the Congress Hall. The connecting zone between this block and the hotel with its inner rest zone is Congress Hall and Media Centre with separate enters.

It is well known that architects from Russia had a month for elaborating their projects – too little time for a serious project. The authors of The Green Bastion sadly say about incompleteness – there much to be done, and there might have appeared new ideas and architectural solutions in further work over the project. 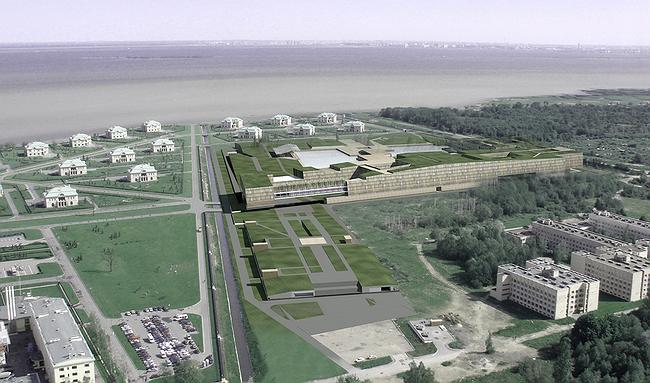 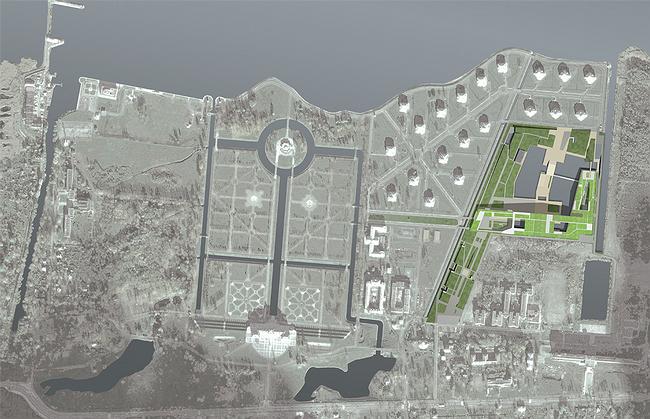 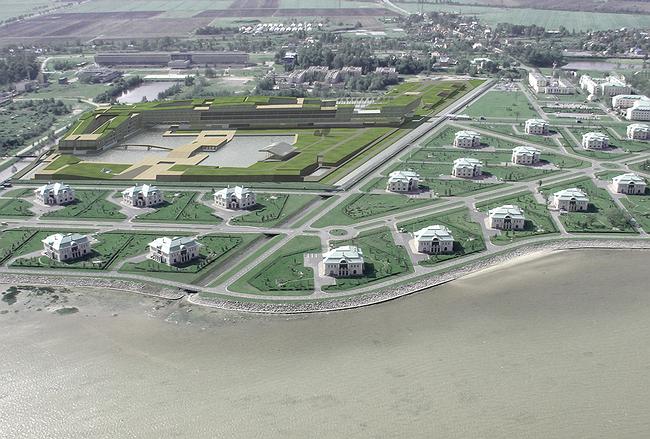 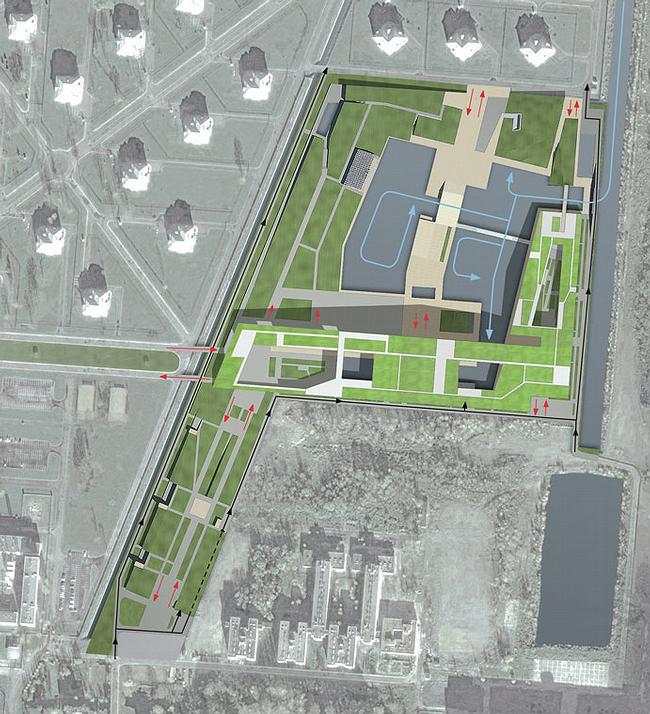 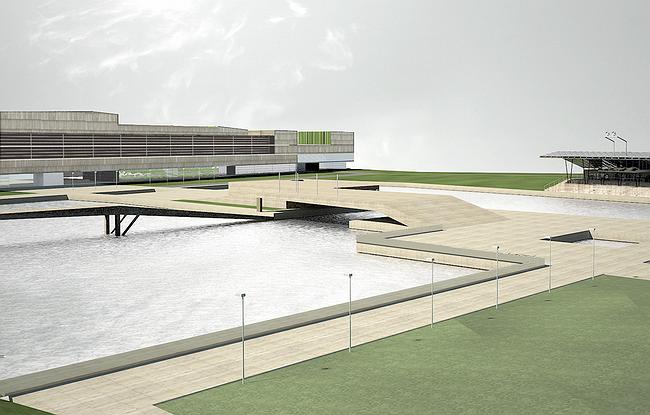 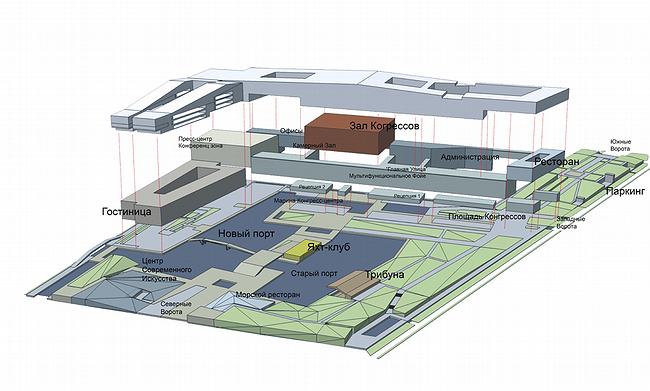