On the Moika River embankment and directly opposite the "New Holland" area, "Eugene Gerasimov and Partners" Studio is designing an elite-class residential building. Once this was the place where the so-called "Lithuanian Castle" stood, and, in the architecture of the new complex, the authors enhanced the continuity of generations between the new and the old buildings.

The that was built in the late XVIII century at the crossing of the and the Krukov channel, originally served to accommodate the Cavalry regiment, and afterwards became the city prison for criminal offenders. The building of an unconventional layout - irregular pentagon sporting round towers at its corners - was erected by the project of I.Starov, the renowned master of classicism. Later on it was rebuilt to become a prison by just as famous I.Charlemagne who made considerable changes to the inside layout of the building while keeping its outward look virtually intact. It might have even survived into the present day, had it not been for the February revolution of 1917 - the revolutionary workers set the prisoners loose and burned the castle down to the ground.

It was only in 1930's that this spot saw residential houses built, and later on also a kindergarten - a three-storey modernist "cube", noticeably sticking out of the overall rhythm of the embankment's housing. In 2007, this building was privatized by the well-known "Okhta Group" that had extremely ambitious plans for it - the reconstruction project included inviting Erick van Egeraat himself into it. The global financial crisis, however, poured cold water on the investors' enthusiasm, and the kindergarten building was ultimately left standing, minimally remodeled and turned into "Graffiti" hostel. In accordance with its new name, its walls were decorated with bold geometric compositions in the vein of Piet Mondrian. In this capacity, the building functioned long enough to become a tourist attraction of sorts, even though the hostel originally had been planned as a short-term fix. The development of the new project was commissioned to the team of Eugene Gerasimov. In spite of the building's popularity, Committee on State Control, Use and Protection of Historical and Cultural Landmarks, denounced the bright "cube" as a dissonant element of the cityscape, and Eugene Gerasimov agrees to this definition. What matters here is the position of the land site - it finishes the distance of the from the side and is plainly viewable from the close as well as remote points on both embankments. And, while the hostel building "holds" the panorama in its own way, it is perfectly obvious that it does not fit in its environment - visually oppressed by the higher roof of the building behind, it violates the scale and the facade rhythm of the embankment's housing. "We did not for a minute doubt that the optimum house planning solution for this spot was a building that would be capable of regenerating the historical cityscape - Eugene Gerasimov explains. - In other words, with this new building we tried to restore the planning and 3D structure of the area, and specifically, restore its original perimeter as well as close the housing line from the side of the Krukov channel".

Building the residential house on the spot where once stood, the architects virtually borrowed the layout of the latter. The underground part of the building, occupied by the parking garage has the shape of THE pentagon - which gave the architects the opportunity to make the most of the construction site area - while the above-ground volume presents a layout in the shape of the letter "R", between whose lower strokes a courtyard is inscribed. As is easy to guess, the latter is placed on top of the underground parking garage. While inscribing the house into the Moika panorama, the architects tried to make it look flesh and blood of the embankment housing that dates back to the XIX century. Hence the proportions and the scale of the designed building - two-section and six-storey, it sports a whole number of elements and techniques that makes it akin to its immediate neighbors. For one, the main facade has a solution that is symmetric to the recessed central part - the niche of the main entrance that is flanked by two big oval-shaped windows. The first floor is coated with rusticated stone, while the others are finished with natural stone, of a more delicate nature, and with shades varying from dark beige to almost ivory. The authors obviously drew inspiration from Saint Petersburg Neoclassic of 1910's: the tell-tale attic, inscribed into the balustrade above the roof, the brutal "fur coat" of the rusticated stone on the first floor, and the pilasters stretched over the entire height of the three floors leave no room for doubt about that. Although the choice of the Ionic order, the flutes on the pilasters, and the generally rich but at the same time austere outside ornament rather refer us to the earlier "historicism" architecture, while the oval windows that flank the main entrance could have, of course, been a part of a neoclassic building but would have looked more habitual in the facades of the houses built in "Northern Modernist" style.

Still, remains - and this is clearly seen - the main source of inspiration for the architects. It was a distinctly "Empire" edifice, at the corners of which, partially drowning in the bulk of two-storey buildings, traditional for the late classicism, large squatting towers stood. Paying tribute to the building's predecessor, the architects also suspended round towers on the corners of the main facade; although their proportions are a lot more on the vertical and elegant side. The towers are echoed by two three-facet bay windows - all put together makes the facade commanding the embankment view look surprisingly plastic, moulded, and three-dimentional. When viewed from a distance, the building indeed looks like a castle but not like the Lithuanian squatting castle, and rather some Hungarian castle of the XIX century, romantic and almost toy-like.

Yet another motif of the is the large, tall, but schematic three-glyph frieze that crowns the main part of the building. A frieze very much like this one crowned the caste of Starov-Charlemagne, and in this particular case the motif looks an unmistakeable quotation. Neoclassic style used no such elements. But then again, a three-glyph frieze is also to be found on the neighboring Empire building - and the frieze from Eugene Gerasimov's facades visually continues its horizontal line, striving, as we already said, to fit in with the historical housing.

And finally, the attic fronton, that we earlier recognized as neoclassic, can also be seen as a reminder of the fronton that crowned the entrance section of the Lithuanian castle. What is interesting is the fact that for the neoclassic architects the shape of the attic with a pitched roof was in itself a reference to the Empire style. In this particular case, two themes - the Empire prototype and the neoclassic style - are unobtrusively blending into one, giving the искусствоведам интерпретаторам a lot of room fr theorizing and (which is probably even more important) - the multi basis contextual rationale to the design of the new building.

Thus, Eugene Gerasimov's new project reveals a multitude of historical allusions: some of them serve to remind of the Lithuanian Castle that was burned down during the revolution, while some help to make the new house fit in with the housing array of the embankment, and (which is also important) to highlight the fact that it belongs to the elite category of residential houses.

The new house, however, reveals a number of contemporary traits as well. In particular, one of the characteristic traits of the contemporary historicism is the polysynthetism of the quotations, the possibility to discover, at close examination, signs of different styles (in this case, Empire, Modernist, and Neoclassic). Besides, the contemporary character of the house is revealed by the wide windows, as well as by the fact that the corner towers lack the characteristic supporting console, a sort of "double chin", and a crowning hipped turret or a faceted dome that we're all but obligatory at the turn of XIX and XX centuries.

Due to the fact that the towers are not either supported or crowned by anything, the unsupported vertical theme gets weaker and one starts perceiving the building as consisting of horizontal layers - the "basic" ground one, and two upper layers that are simpler, lighter, and look a lot like the additional stories that were often built above the tenement houses in the per-war era. Hence two things. First of all, this building has a lot less tectonics about it than its historical prototypes did, but at the same time, in spite of all the conservatism of its facades, it shows the horizontal attraction that is quite modernist. Two themes, the classic tectonic one, and the "ribbon" modernist intertwine in quite a peculiar combination - which makes the building look recognizable and up-to-date at the same time.

Second of all, the recessed upper floors, looking indeed like later-on additions on top of a historical building, set the theme of imitation of a few life cycles of the building - as if the totally new house makes believe that it has been several times rebuilt, which also can be considered a sign of the times. And finally, the stepping silhouette created by the recessed sixth floor is the most recognizable trait of the house built in this historical city.

Incidentally, the mansard floor, even though hiding from the passers-by by a cornice, serves a good turn when viewed from a distance: thanks to its tallness, behind the new house, like behind a screen, the old soviet houses will disappear. 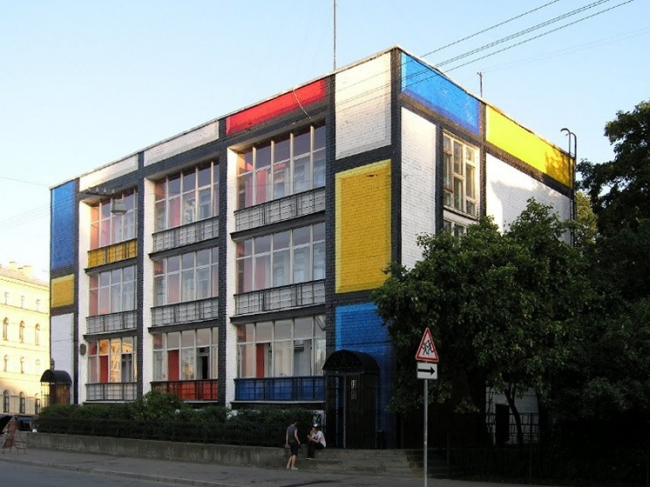 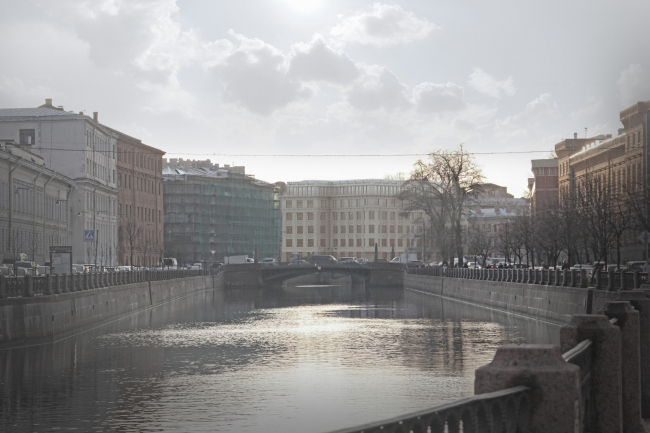