On the second version of TOTEMENT / PAPER project for Sakhalin

In the second version, the building is restricted neither by the unity of the geometric module nor by the rectangular frame that cuts the spongy “cell” out of the space. At a first glance, one gets the impression that the building “shoots up” perfectly free and in a very energetic way, too - transforming and enhancing the irregular contours of the landscape. Here what we see, however, is rather a phenomenon of a geologic type: this is how the result of rock decay in some ancient mountain might look like. If the rock material had initially come in a stream pattern, then got broken, leaving bridges, caves, and consoles of quaint shapes and forms, and then was neatly sliced with broad planes... Approximately this kind of a process could have created the “branching” environment that in some places follows the curves of the landscape but more often than not even enhances them in a grotesque way, making them sharper, and stretches the long “necks” in the direction of the seaside.

In spite of the first “geologic” impression, however, the idea of shape-making here is not about mimicking the nature (we do not like it when our architecture is defined as “bionic” - Levon Airapetov says). Its meaning lies in the interaction between the architect and the landscape. This interaction, however, is of a special kind: man adopts the language of geological formations, learns it and builds his forms in accordance with its laws but - and this is especially important here - exerting his own will in this dialogue quite unambiguously. The exquisite graphic lines are the result of the author’s reconsideration of many various things: from the random contours of the seashore to the beauty of the drawing as such, charged with kinetic energy. The energy is supplied by the author himself who charges the lines and the volumes with motion, based on sheer landscape: the slope and the mountain. “On a flat field, you've got nothing to hook on to - the architect shares - and here it is a whole lot easier with the depression, the hill, and the creek”. The key word here is “hook on” - once you have that nailed down, things will pretty much take care of themselves, you will only have to spin and bend the lines, not letting them run away too far off the center.

The lines are spreading far and wide indeed: the architects made an accent on the roofed passage to the plant area - this is the farthest of the “runaway” lines that pierces the center of the building, dashes past the atrium in the center and, making a number of sharp turns, opens up to the sea with a two-level sightseeing platform with a panoramic window below and a summer terrace on the second floor. It was planned that from here and down to the shoreline a tunnel would be dug - thus, the exquisite axis would have run the complex through from north to south, from the plant to the sea. What is peculiar here is the fact that initially this motion runs on the ground, then above the ground, and finally underground, inside the hill. It should be said that the first version of the project also had in it the passage and even the tunnel as part of the specification, but in the first version they were peripheral and looked like mere supplements to the comparatively austere rectangular building, while here they have turned into the major form-building elements.

The volumes of the auditoriums, offices, and meeting rooms scattered over the slope in a three-fingered “paw” pattern, they also look like three brisk “noses” or even “heads”: one looks eastward, another one looks south-east, and the third one looks south-west. In this version f the project, the authors treat the terrain and the landscape just as actively: the buildings spring up from underground and shoot off deep consoles, leaving open pedestrian pathways below. The building “sticks” to the surrounding environment, and penetrates it without making any obstacles but opening numerous air corridors.

The labyrinth- like spaces outside and inside look a lot like one another, and, thanks to he glass walls, the difference becomes almost imperceptible: this building is a single organism that consists of a multitude of various open, semi-open, and closed spaces. The fact that the main facade here is simply non-existent goes without saying - it is purely inconceivable here because this building, as the architects aptly put it, is a collection of stop-frames taken off a moving organism with a life of its own. 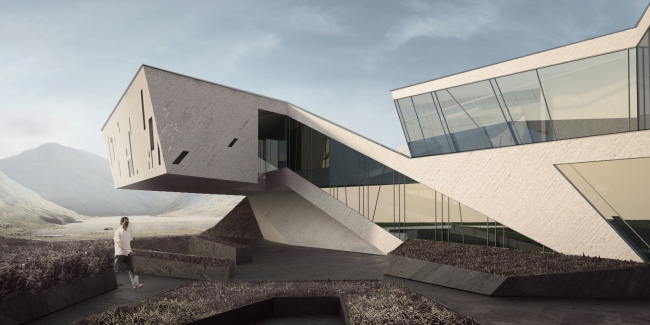 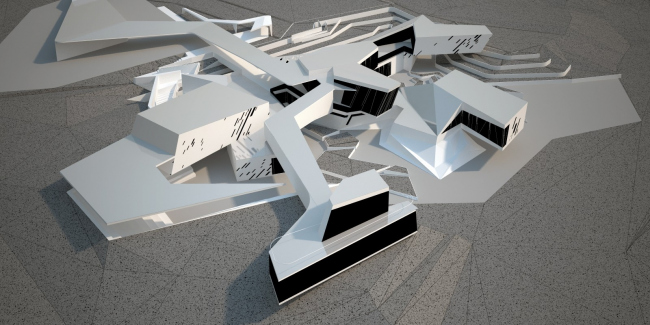 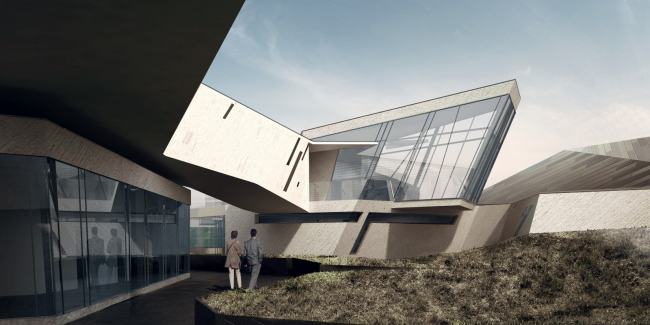 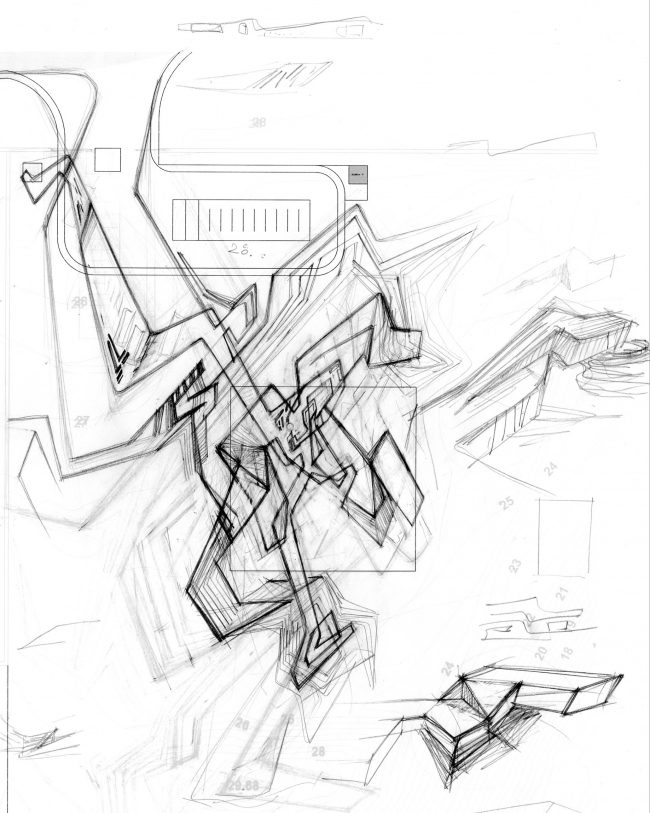 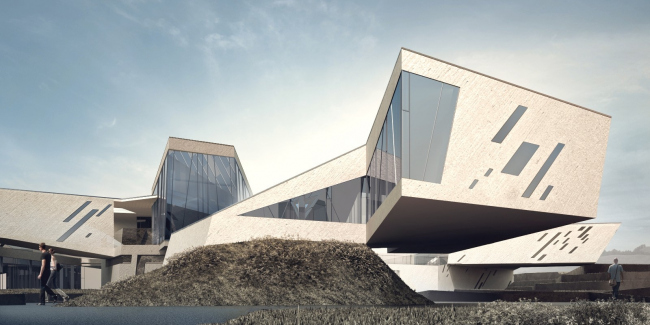 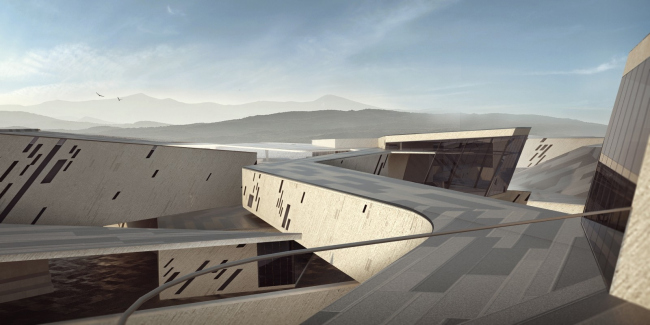 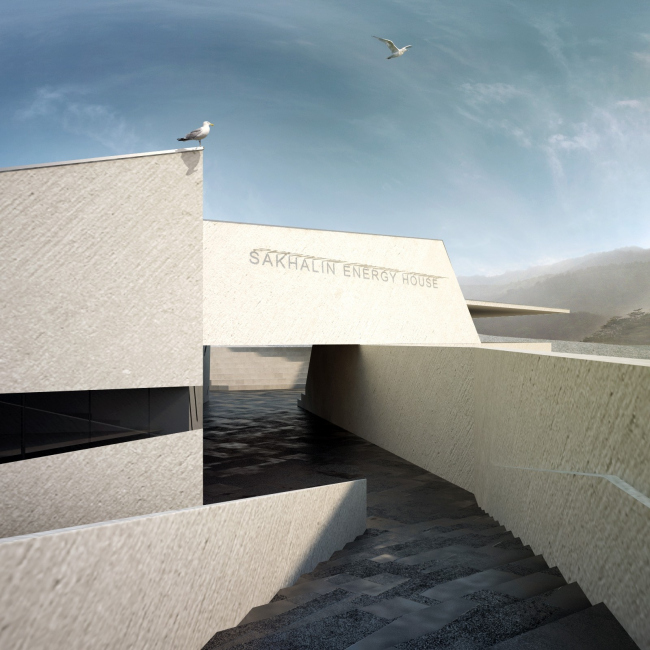 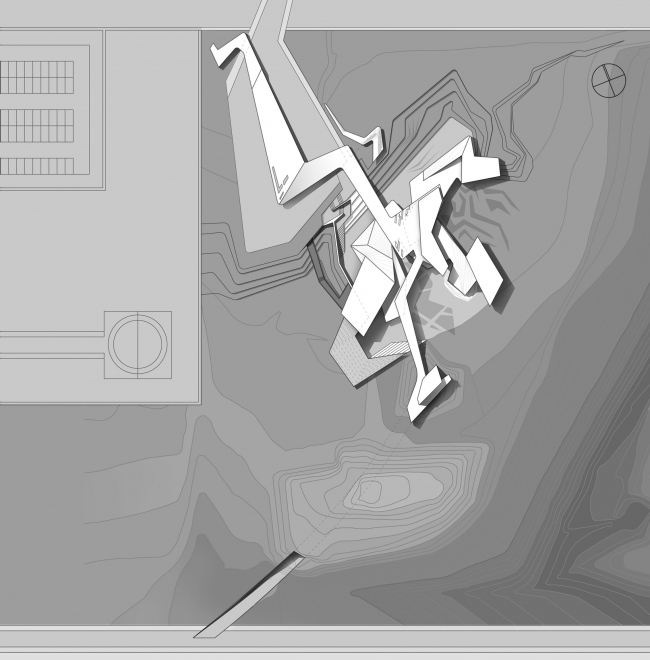 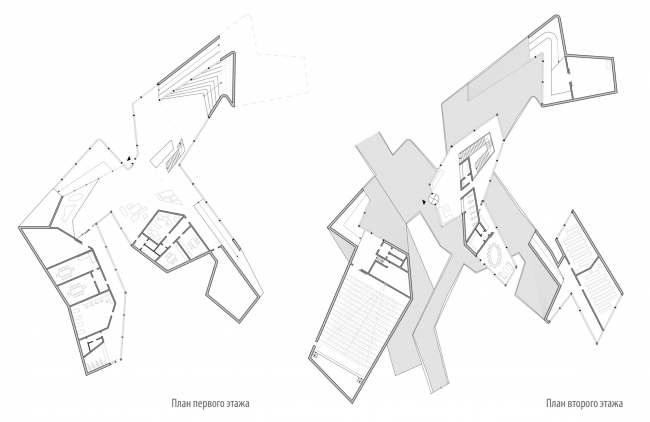 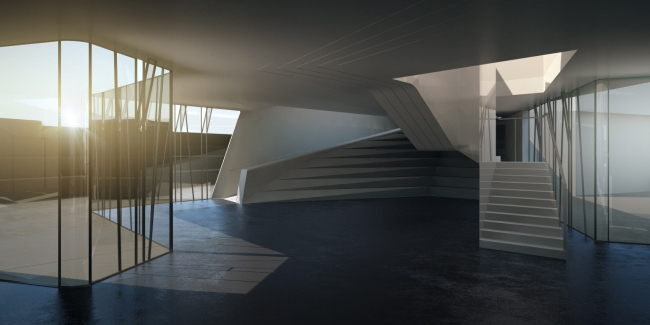 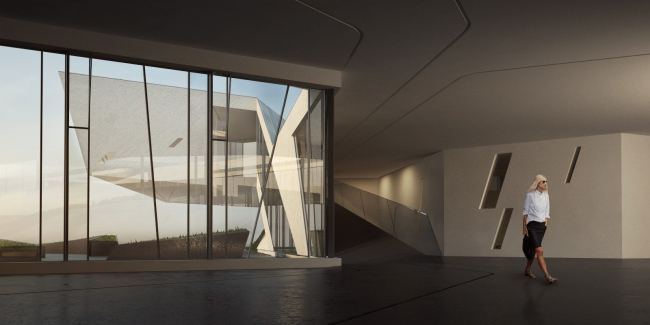 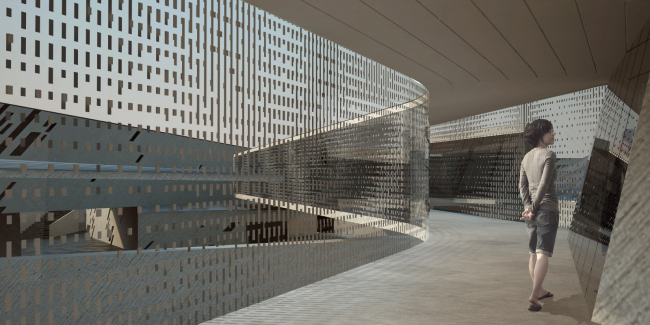 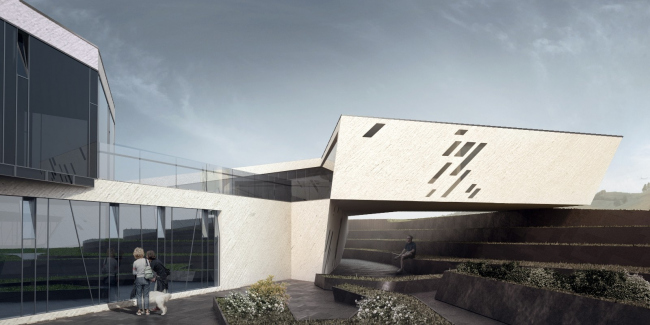