For one of Saint Petersburg’s most popular resorts – Sestroretsk – “Architecturium” Bureau has developed a concept of a low-rise residential complex. The compound that is going to include townhouses and villas is designed as an integrated development with a comfortable and memorable environment.

The new residential compound will be built on a land site with a total area of . Having the shape of a quadrant and a trapeze adjoining to one another, it is limited by Matrosskaya Street, Levashovskoe and Primorskoe Highways, and on one side it borders on the new residential area of five-story houses, while on the other side – on a nursery garden and woodland. “Our impressions of the place luckily coincided with the requirements of the commissioner who did not want to build anything high-rise here but, quite the opposite, asked us to design a comfortable area with low-rise residential buildings and developed infrastructure – Vladimir Bindeman shares – and the motto of this project sort of suggested itself: ‘A cozy megalopolis suburb’, so we took this as a starting point in our work. At the same time, it was important for us that our megalopolis in this particular case was , a city with a unique history and a recognizable regular planning pattern”.
The architects opted not soften the inherent “geometrism” of the layout but, conversely, used it as the main composition and planning device enhancing the new compound’s continuance with the planning of Saint Petersburg downtown area. Into the trapeze, the architects inscribed a square, the size of the neighboring plot, but positioned it at an angle to the latter, and, dissected with the square cells of blocks, these two quadrants became the two main residential areas of the future complex. The “tip” of the site is landscaped and it hides the engineering infrastructure facilities, while in between the two quadrants the architects make the central square with a park – the main landscaped area of the compound, surrounded by public buildings. Incidentally, the layout of one of those buildings is also fully conditioned by the master plan – this is a triangular volume facing the square and suck into the trees at the back. From the opposite side, the theme of landscaped area is supported by a park, while yet another boulevard runs perpendicular to the already-mentioned street.
Each block, according to the authors, is going to get paved with paving slabs of different shades (shades of color fairly close to one another but at the same time clearly indicating to the pedestrian which part of the area he is in), the streets are going to be aligned with trees, and each of the crossroads will be designed as a little cozy square with corners – shopping and restaurant facilities situated on the ground floors of the corner buildings. The environment will also be diversified by the various options of positioning the townhouses. “Because the future area neighbors on the nursery garden, i.e., with “dacha” land plots, the first thing that occurred to us was o organize our planning in such a way that the dachas would neighbor on the villa belt , and closer to the center it would be a circle of townhouses – Bindeman explains – but we realized early on that it was a very predictable and, hence, rather dull idea. So we decided: since we are breaking away from the typical Russian idea of the townhouse, then why not change the image of a villa?” According to “Architecturium”, a villa is not some kind of fortress behind a wonderwall, but a friendly city house with a land site of its own but no fence of any kind, thanks to which it becomes a fully-fledged player of the city planning and contributes to its image.
The residential volumes will be finished with light multicolored panels (yet another point in favor of diversifying the environment visually), while the public buildings, by contrast, are designed in serious-looking bricks. The only exception is the triangular “nose” of the shopping and sports volume – the pointed façade turned to the little green square gets a 100% glass finish with its surface decorated with multicolored triangular bay windows. According to estimates, this complex is going to become the main “magnet” of the social life of the neighborhood, and the architects introduce into it such an indispensable element of the town square as the clock tower. The clock tower is also up-to-date here, though, the clock being an electronic one – the top section of the vertical centerpiece is designed as 360-degree revolving cube that will be backlit at night and serve as the recognizable orienting point. Concept of the low-rise residential complex in Sestroretsk. Project, 2012 © Arkhitekturium 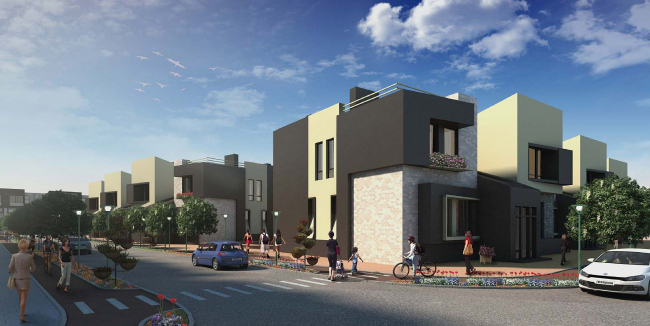 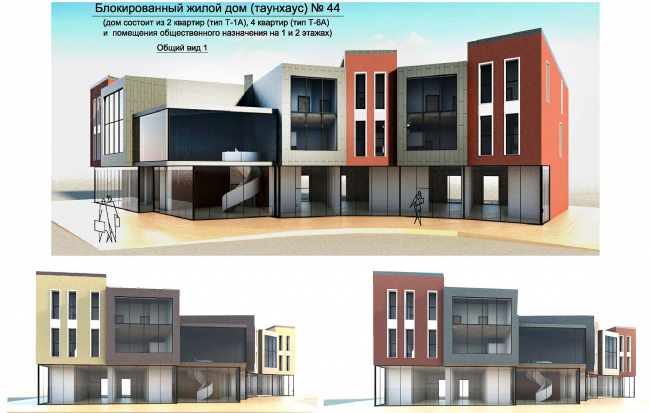