Reconstruction of the ‘Red rose’ is probably the most well-known reconstruction project of old factories. Started in 2003 it will be finished in 2012. There have been many argues and some have been very enthusiastic about it. We tried to digest the information, to see what will be saved and what regenerated, and what will be absolutely new there

The idea of reconstruction of old factories in Moscow center is one of the most popular. And the factory ‘Red rose’ is one was earliest, largest and famous projects of the kind. In 1990’s it was set by ‘Nirel’, the investment company, and in 2003 Sergei Kiselev’s architectural studio designed the urban planning reconstruction concept of this territory for 9 years – all the activities will have been completed by 2012. The investor is ZAO ‘Red Rose 1875’, and the client is ‘StroiProject’.

The urban planning concept, done and approved in 2004, is the project of transformation of the 6 ha of factory territory into a new business center with a lot of renters, which also will be open for citizens, this means that anyone can walk through it’s territory. In total, the center will unite 10 buildings of different sizes and purposes.

There are two monuments left in the center of the factory area, which will be renovated according to Ludmila Barshh’s design: the first one is the Volzhskie’s manor house, after 1875 on it’s territory was constructed the factory. One-storey house that survived the fire of 1812, in soviet period was made into a gymnasium, and its wooden walls have almost decayed. To the log-construction will be applied the restoration technology for wooden buildings, the old glazed tile stoves will be saved, the interior will be decorated with antiquarian furniture – this will be the building to receive important guests. The second architecture monument also is located within the territory - it is the gallery of paintings of Claude Giraud, the silk mill founder, built by Roman Klein, a very famous person of the late 19th century, good at both museums and factory buildings design.

Besides the two ‘official’ monuments, the ‘Red rose’ also has got a range of less eminent factory buildings, plainer but of good quality exponents of the industry architecture of late 19th century. Some time ago the decision to preserve some of these buildings got positive responses from critics – that was a rare illustration of concerned approach to buildings, which are not monuments. Due to the reconstruction of the building №9 - there is the RBR bank’s office nowadays – with participation of studio ‘Rozhdestvenka’ in 2004, when a multilevel glass gallery was attached to the yard façade, it became obvious how harmoniously may old walls go with the newest design. The second saved building №7 has already been reconstructed. Both will have the same look they have now.

So, the monuments are being reconstructed – only the wooden house will be constructed over again, and the two brick houses will be repaired, they have got modern touch and will remain original. And on the two factory poles there will be two new large office buildings of A-level that is has never been applied to historical buildings, №1 and №2. They are also being designed by ‘Sergey Kiselev and partners’.

The building №1 is the most well-known one of the ‘Red rose’, there have been ArtPlay gallery since 2003 that is ‘home’ for a number of art offices and has become quite famous. ArtPlay is a significant example of loft space development by artists, absolutely common for Moscow. But hardly the original building will be kept – there were articles on the problem in newspapers – but the authors never mentioned this had been the initial idea. Sergey Kiselev had a project that according to layouts required demolition and reconstruction of the building part that fronts Timur Frunze street. The architects call it ‘shed building’ because of covering peculiarity – it looks like a concrete accordion, within its sides there are windows to gain maximum of upper light for wide one-level workshop space. Sheds is a common technique for covering large workshops, here they have already become the mark of the building. Not only façade will be reconstructed, but the covering as well - the whole volume about 20 m from the street.

It should be noted that some time ago following opinions of media and Old Moscow defenders the client asked to save the ‘shed’ building a la ArtPlay and just attach a new building deep within. There was even held a special meeting to discuss the problem. But it turned out that they would have to get rid of about one-third of the underground parking to save the building. Or to dug it somewhere else - in short, to make completely new project for the building №1 on account of the changed specifications. And postpone finishing the construction for more than a year.

Well, the ‘shed’ building is being demolished and will be reconstructed with the underground garage. This was the initial idea suggested in 2003. ‘Behind the back’ there will be a huge glass volume with the inner atrium, by a third less than previously reviewed 8-level building but still very considerable. There will be offices and a fitness-center. The building is quite modest but has an idea that makes it special. On eastern façade, right behind the triangle series of the shed covering, there will be triangle ledges, which are like the sheds but of mirror-like glass. They will reflect the ribbed factory roof, showing the passers by the view on top that they can never see. Actually, the idea of reflection so ordinary for modern glass architecture has got a new representation here – the façade does not take and show dryly what is open to it, but also makes a kind of a ‘leap’ ahead, sprouting some parts it needs to display more. This makes architecture more entertaining, and the purpose of reflection becomes more obvious – it’s not of an occasional kind, it has been worked out in advance and added as the main part to the texture of the façade décor. Reflection becomes a kind of jewellery what is at least remarkable.

Besides the reflection game there is another small secret – the grade of the ‘modernity’ notably increases from the edge (the shed building) that fronts Timur Frunze street to the center. In the center there is a totally glass atrium flanked by the plain light gray parallelepipeds – a local version of Scilla and Haribda that made way for the glass ‘iceberg’. The roof of the atrium is covered with huge analogy of the sheds – they are so large that there have fitted only three ledges clearly suggesting resemblance to the factory part.

So, the ‘Red rose’ is a large area in the city center which reconstruction have been started earlier than others alike. For the past four years it has become a peculiar kind of model and a subject of argument. It demonstrates how hard and expensive it is to save historical environment at the same time changing it into exclusive offices of A-level (must notice offices placed in old factories are never of higher than B-level). At the same it cannot be considered compromise. More likely this is an example of neighboring and complete understanding between two extremes, the first is the generous effort to save everything possible, and the other is the natural wish to make the final high quality and well-sold product. Well, in Moscow the second wins it all. But in the ‘Red rose’ there seems to be a fragile balance. 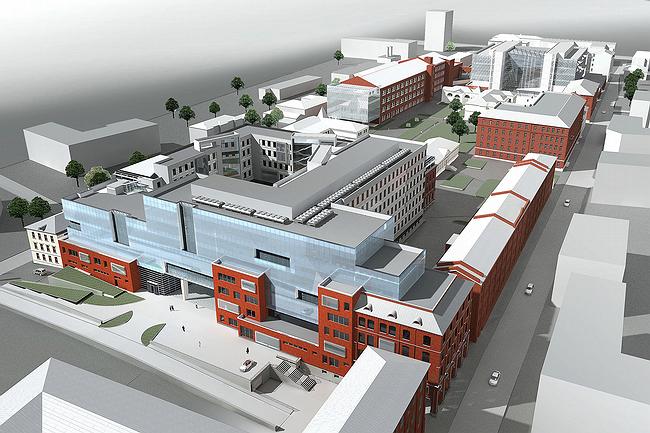 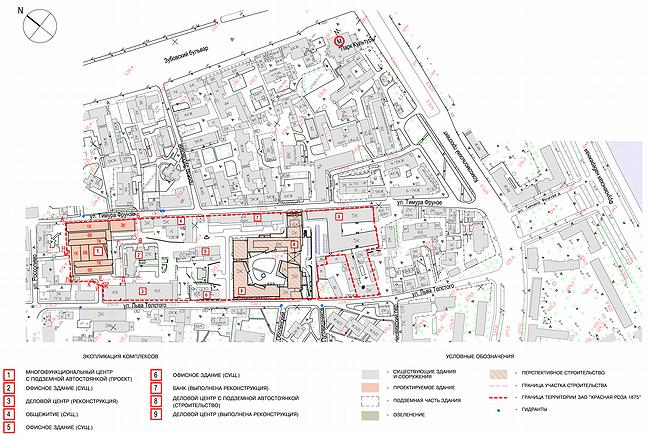 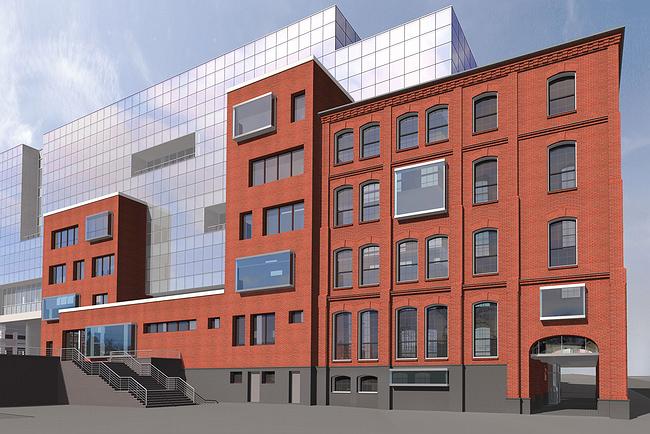 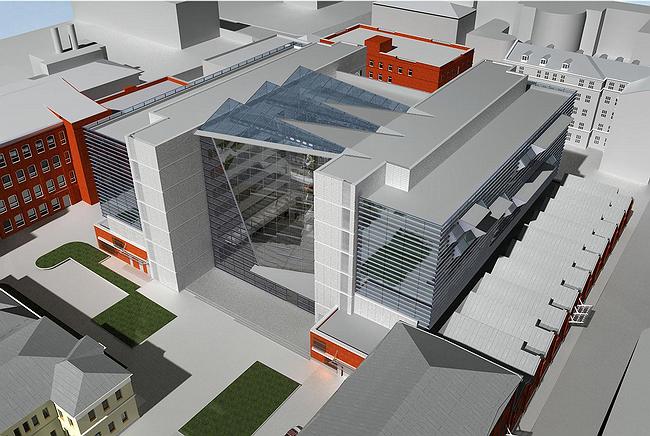 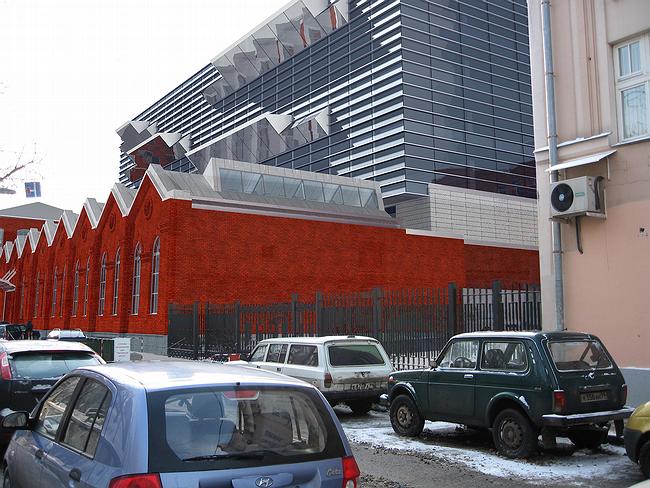 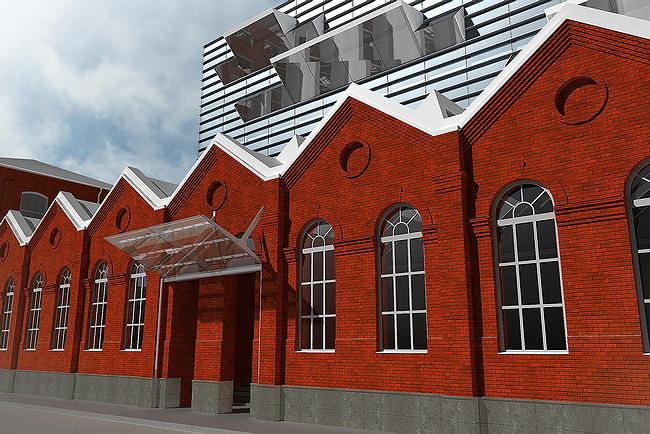 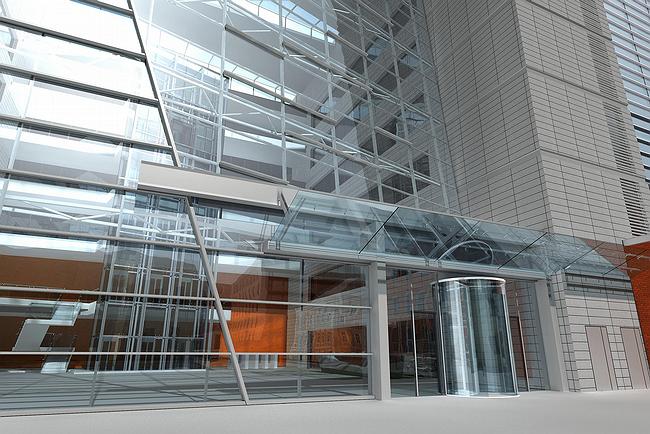 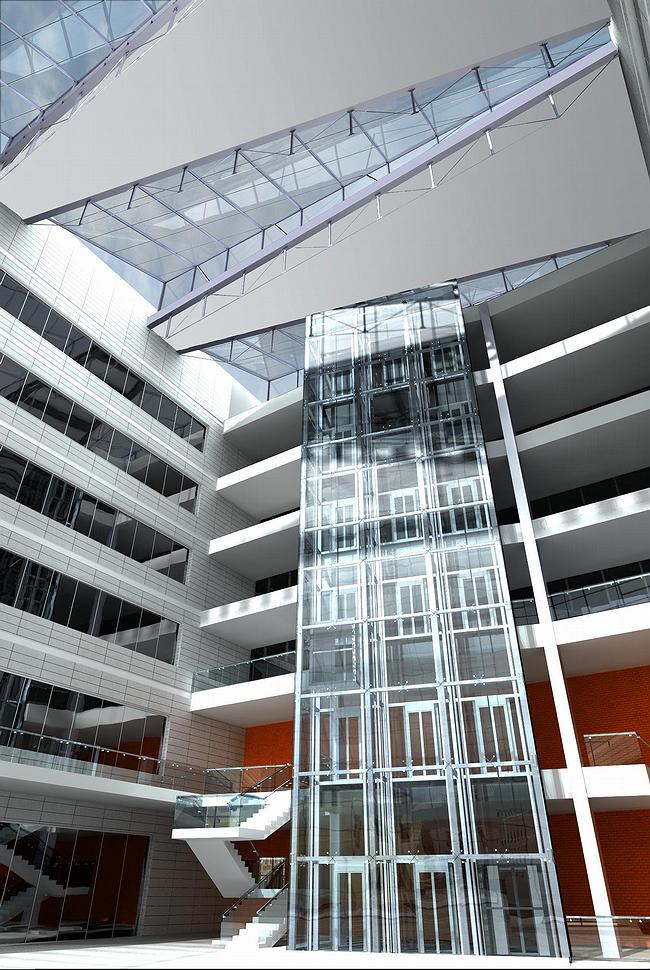 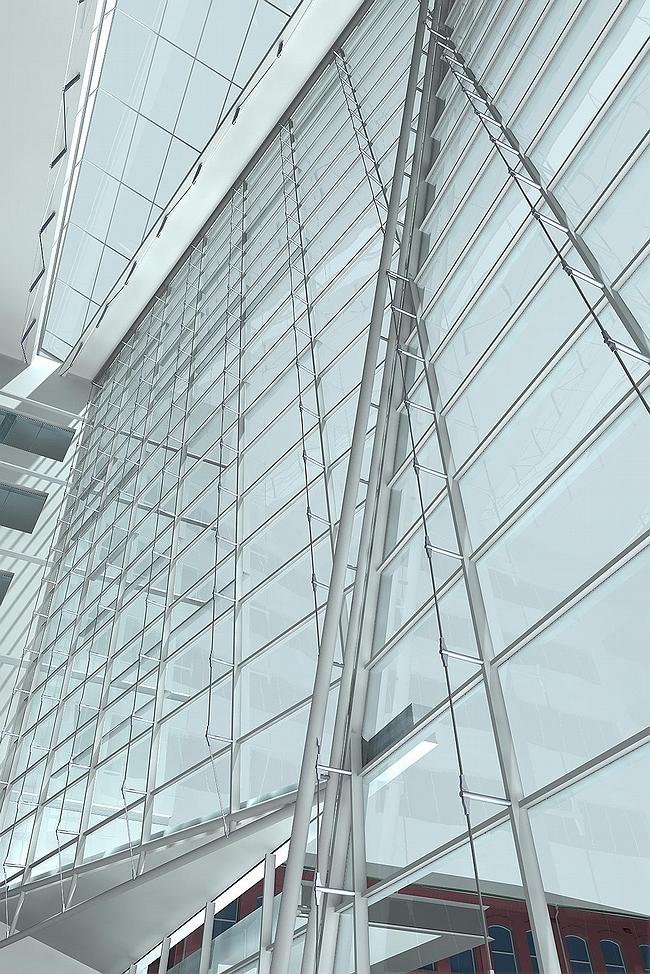 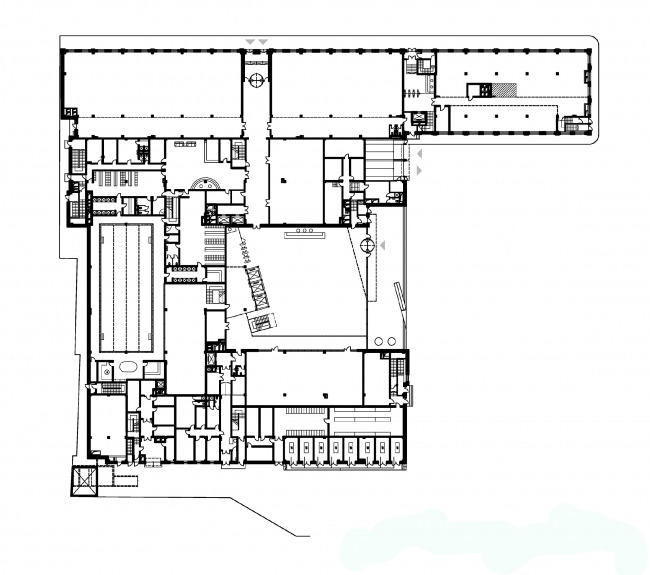