Building with the hinge

Last year project of the multi-use complex in the beginning of the Entuziastov highway got the gold diploma at ‘Zodchestvo’ – maybe for bright and neat image, also for keenness of the town-planning idea. The house that will be right behind Radonezhskaya Zastava resembles a part of a huge machine - a representative of the industrial part of Moscow

Rogozhskaya Zastava is the territory of cultural contrasts. Lenin is side by side with Sergey Radonezhsky, Spaso-Andronikov Monastery neighbors to ‘Serp and Molot’, old and new city cut into each other with great obviousness – the line of 2-stored historic buildings, shy, but solid in some parts, hardly holds back high panel buildings that are growing in multitude. Lacerated urban texture of this district is the result of failure to blend ‘the old' city with the ‘new’; the most vivid example is Shkolnaya street restored in 1980’s. Right ‘behind’, close to monuments of historical and architectural experiments, there begins the real industry zone, secret territories, warestores, rolling mills and rest wonders of industry – quite a technological paradise, only too out of date now.

So, the surrounding is very contrast – the project by Pavel Andreev keenly responds to the tune, it seem to absorb ambiguity of architecture and roughness of context, intensifies and embodies in architectural forms, reducing to significant laconism. Giant, almost 100 meters high building consists of the two ones, black and white. At higher levels the black ‘Г’-like volume cuts the white one through, which has a few levels opening for this. In the part where they connect, there seems to be a ‘hinge’, as if the giant panel used to rotate about an axis, and then they stopped at a certain angle: one along the square, and the other one along Entuziastov boulevard. Inside, the ‘hinge’ is the round hall that is on each level and thus is piercing the building vertically, drawing it upon the axle, seen partly outside.

Everything is done to create the image of exponent of technological progress, detail of a mechanism or even a house-machine, that if necessary is able to turn its volumes at a needed angle. Such building becomes an exponent of ‘industrial’ part of the city – a kind of hi-tech ‘propylaeum’ of Rogozhskaya Zastava.

In this context the building inherits industrial variety of constructivism of 1920’s, that branch of avant-garde, which representatives were into reproduction of technical wonders of their time, stiffened and enlarged in architectural forms – they built houses in the shape of a tractor or a railway engine. Since then technical images have refilled the ‘treasure’ box of modernism and became a norm – most creations of 20th century may be compared to anything industrial, mostly to a ship, train or rocket. But here things are a bit different – there is no special image, but a hinge, scaled up greatly, and inside it is most classical of all interiors techniques – it is round and has many supports, like columns.

But then, there appears another parallel with some machine’s part of unconceivable size that somehow is on the ground now and is used as a house. This image is likely to be the most appropriate, because the building will be green in some parts, there will be hanging garden arranged on the open loggias and roofs of the lower levels, and also on the seen platform of the ‘hinge’. If this ecological idea is realized, the parallel with part of a giant machine, grown into the ground, will be intensified. 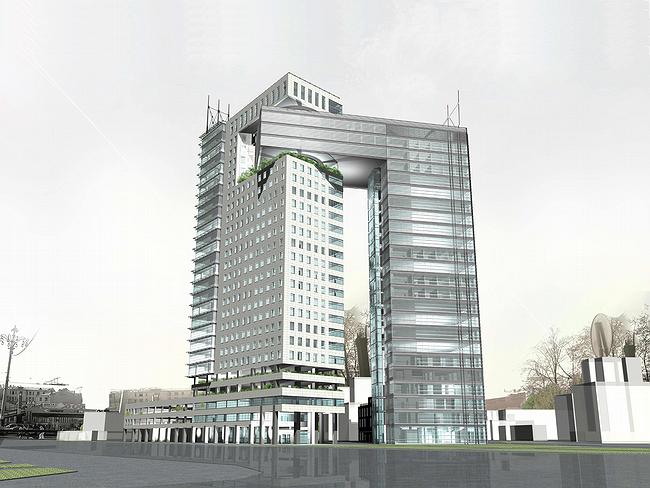 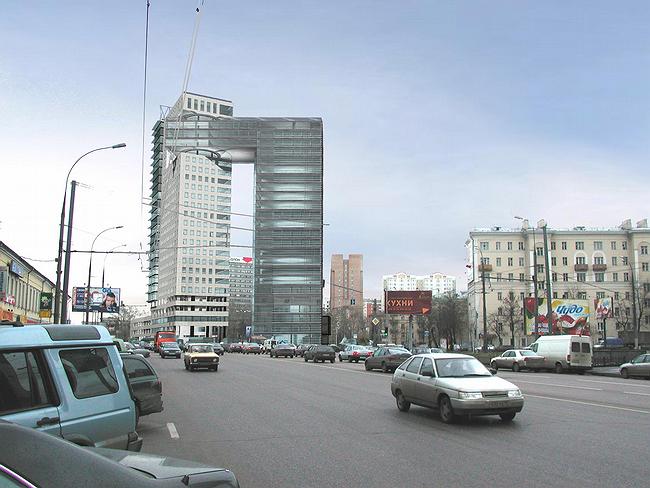 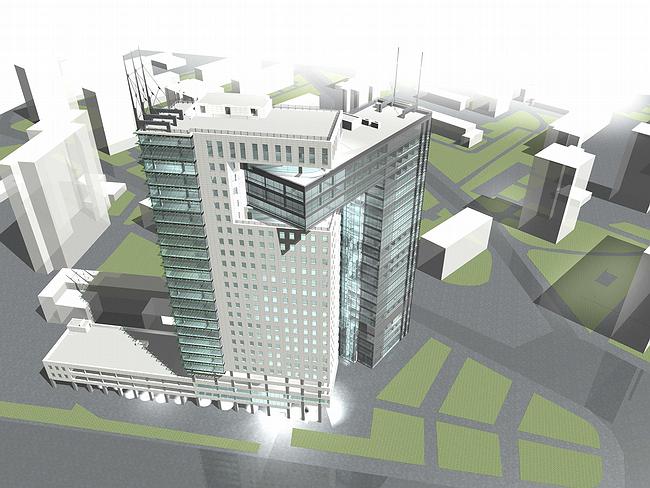 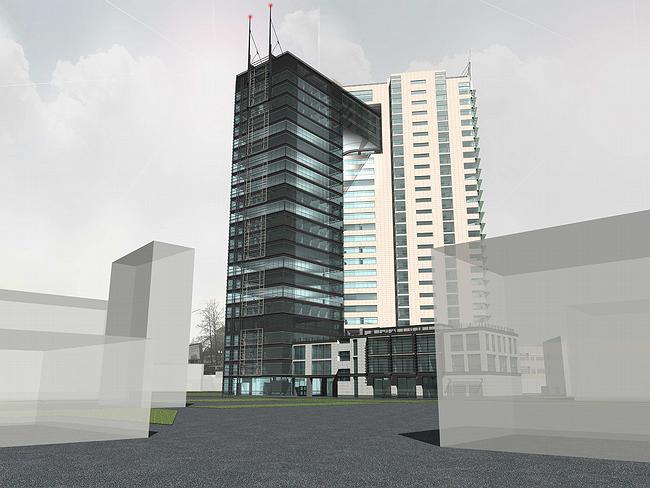 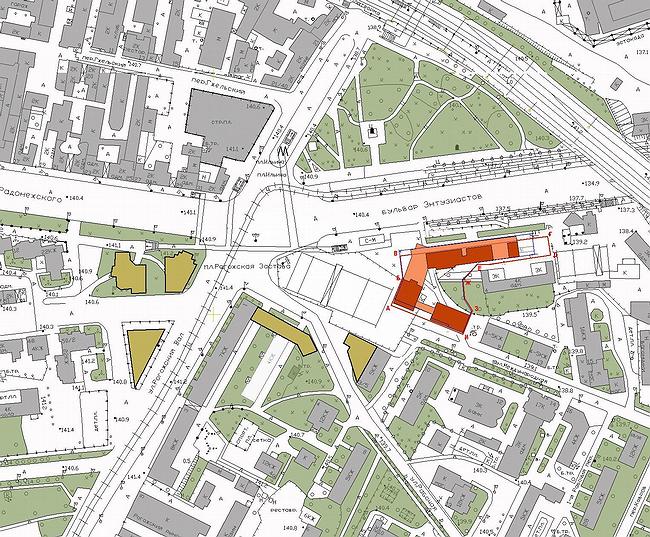 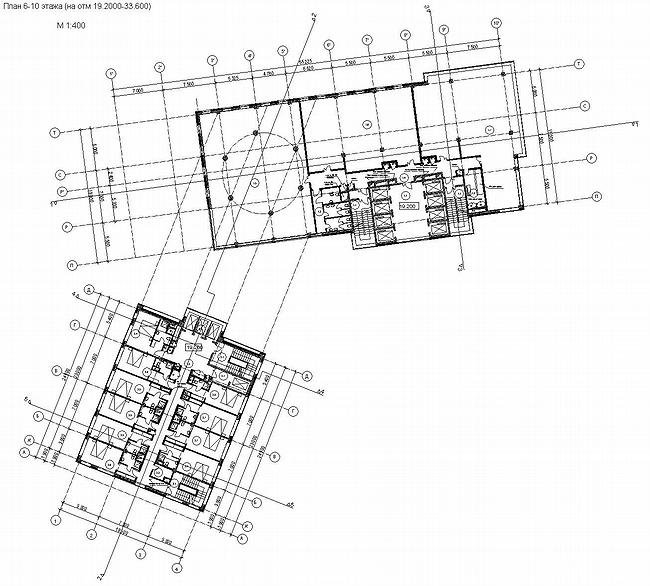 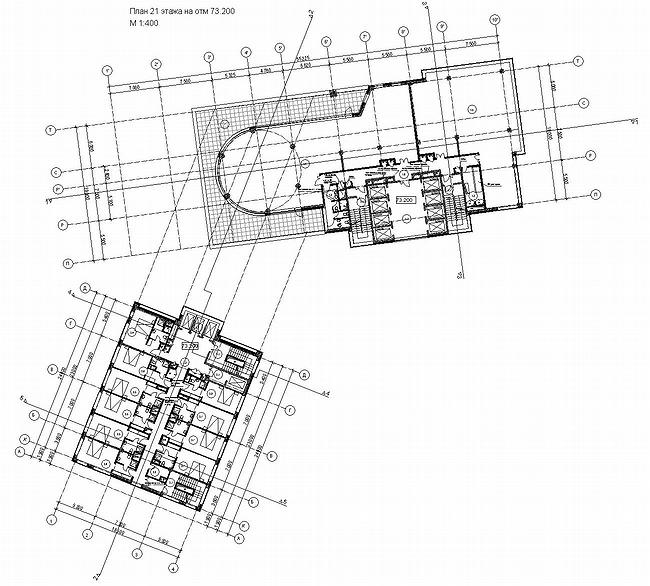