Gene code for a district, or poetic town-planning

A ‘design-code’ produced by Sergey Skuratov’s workshop for the 473 district in Khamovniki presents a new variant of Moscow town-planning. It is more than just a plan or a list of recommendations, it gives a detailed image of the district in project. It is interesting to note that here the architect is concerned not just with volume and texture but with ‘psychological problems’ of the locality, and tries to bring a new soul into it.

The “Kauchuk” factory is situated between Fruntezskaya and Sportivanaya underground stations, next to the park of the Trubetskoy’s mansion. On one side of the park there is the City youth centre; on the other side the Fusion Park is being built by Vladimir Plotkin. Yet another site is covered by the “Kauchuk”, an air polluting factory built in 1915. There just one building left from the early 20th c. – the factory offices by Roman Klein, a famous architect of the time. The rest of the factory’s territory is occupied by dilapidated buildings made in 1970s. The factory will be removed to the outskirts of the city, and should be replaced by a residential area.
A competition had been announced, and first rate Russian architects had been invited to participate. There were two winners – the “Meganom” workshop, and Skuratov’s workshop. The next stage was represented by an interview after which the Skuratov’s workshop was selected; the latter was offered to produce a concept of the project and to create projects for most buildings. The rest of the buildings (about 10% of the whole amount) are to be projected by other architects (by “Meganom”, the “A-B” group, by Alexander Brodsky, Alexey Kurenny,  Vladimir Plotkin, Alexander Skokan and Sergey Choban).
Sergey Skuratov is the head of the project; his workshop is currently working on the detailed book of rules, which is called a ‘design-code’. As one reads commentaries, one gets persuaded that design-code is reminiscent of gene code: it regulates everything, and yet on its basis different individuals are to appear.
The 473 district is enclosed at the moment; it is planned to be given back to the city space as it would be possible to walk through. In the centre a rectangular pond will be created, with a mini-district at each side. Thus the district would get 5 centres – fours ‘private’ centres, i.e., inner courts intended for the inhabitants, and one public – that is, a square around the pond.
The volumes of each building are set in details: many houses are supposed to beetle over passages like giant consoles. The buildings height and the amount of floors are defined, together with places where windows should be. The factory’s offices by Klein will be restored, and it’s replica that had been lost during the Soviet period would be rebuilt. Between those two a new modernist building  of metal and glass would be erected.
The materials to be used are defined by Klein’s project as well as by Skuratov’s love of brick texture. On the outer contour of the district the brick is to be used (Dutch handmade brick as well as German clinker), inside, around the pond – light stone, glass and metal. Thus the district would look more traditional from outside than from inside.  .
Theory is of no less importance here. Sergey Skuratov combines the principles of contexualism with modernist creativity. The pond, for instance, reminds one of the 18th-century mansion parks while brick refers to the Klein’s project as well as to Khamivniki’s brick-yards of the 17th c. This cultural motivation is familiar to contemporary Moscow. But there is more to it: Klein’s building, a strict and beautiful model of factory architecture gives a ‘West’ pole which is counterbalanced by ‘Eastern’  model of Moscow architecture of the early 2000s (“Camelot” apartment block).
Therefore the district’s ‘gene code’ holds various information necessary for the ‘growth’ of buildings. It has theoretical core and detailed recommendations that are concerned with the ‘framework’, – plans and structure, - the ‘contents’, - volumes, - and the ‘skin’ – facades’ texture.
Text by: Sergey Skuratov, Julia Tarabarina 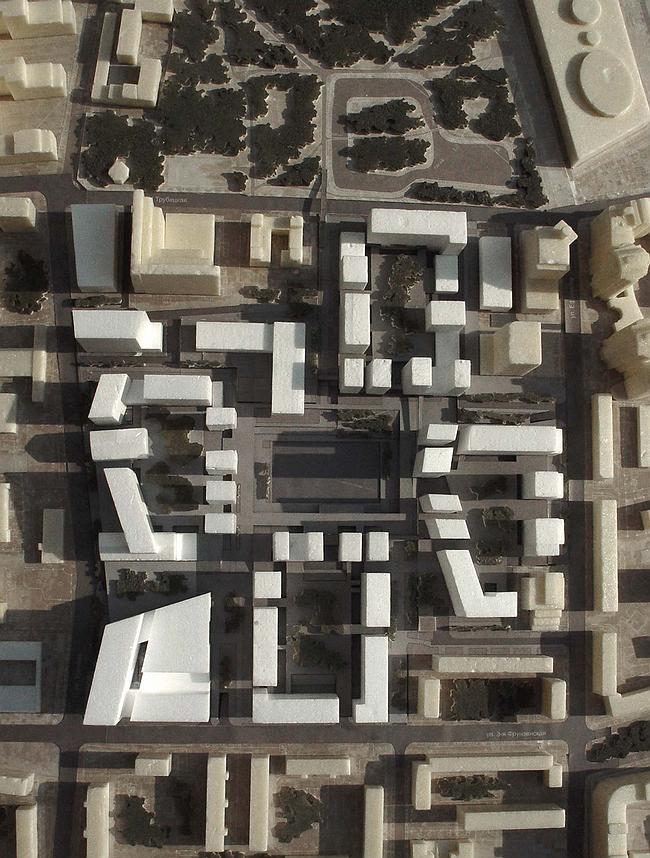 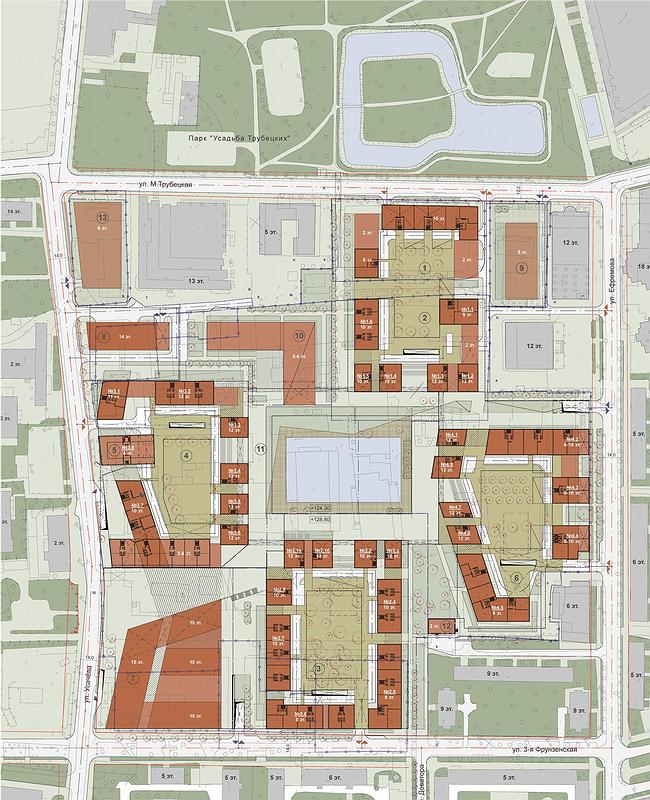 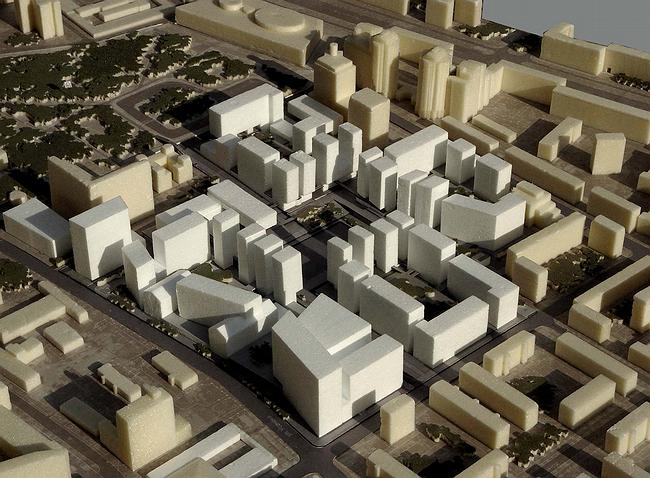 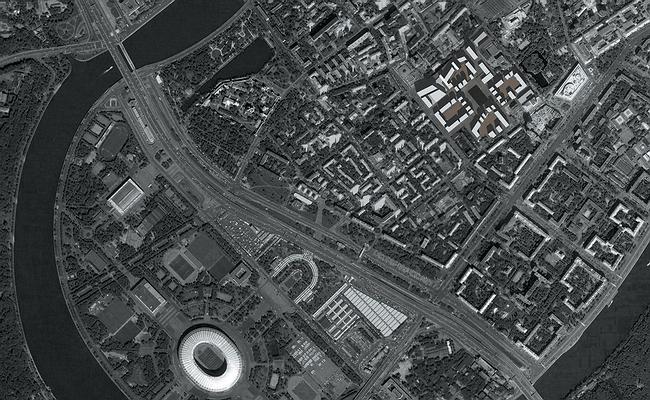 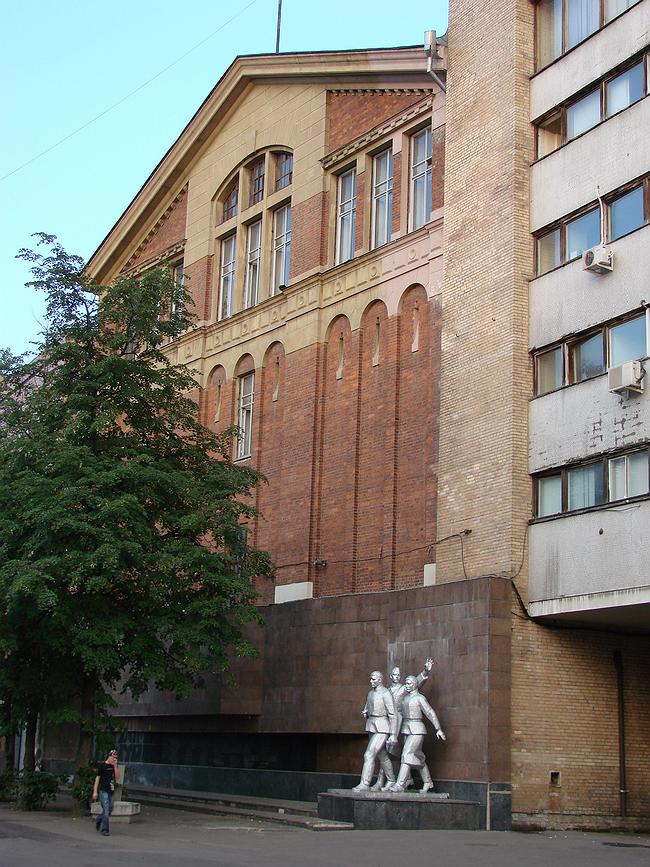 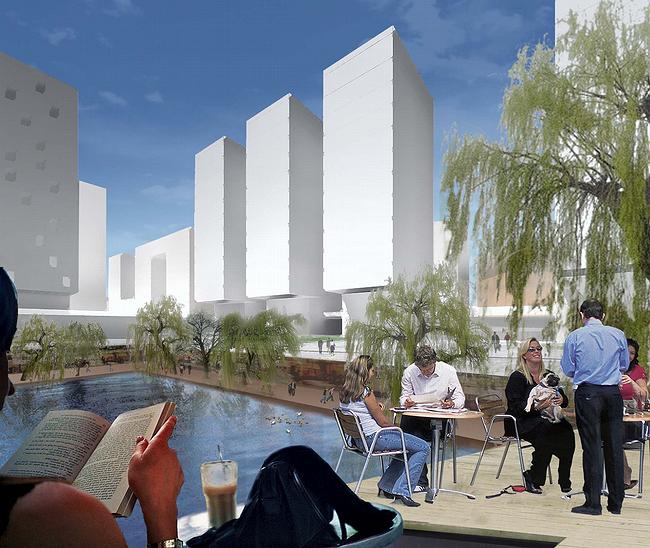 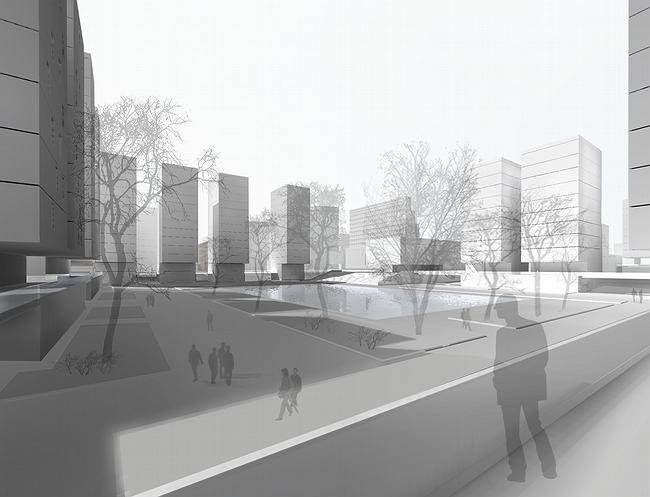 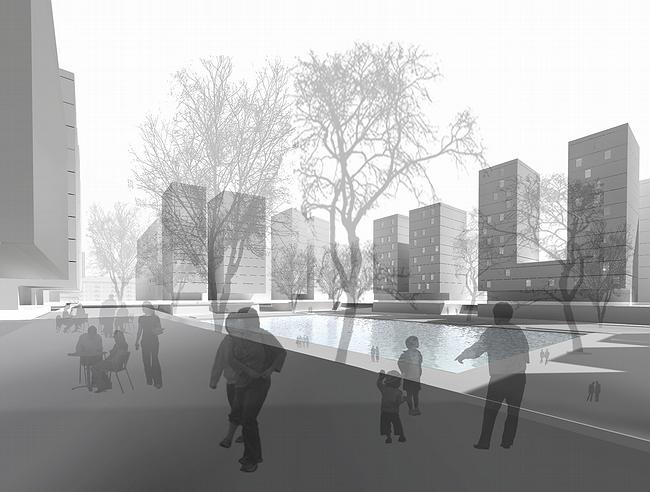 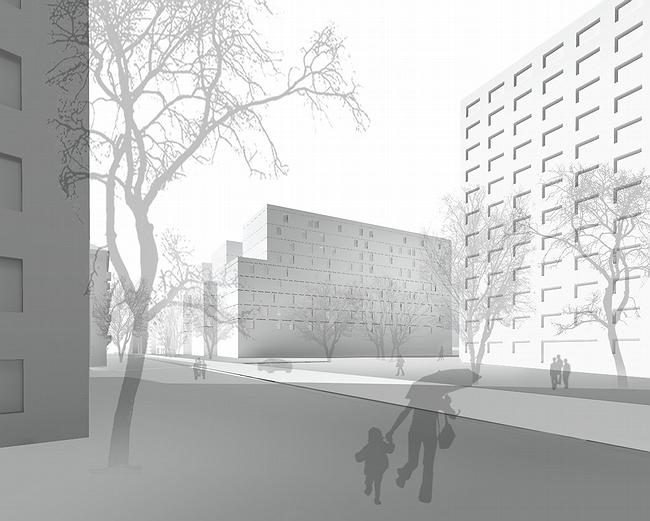 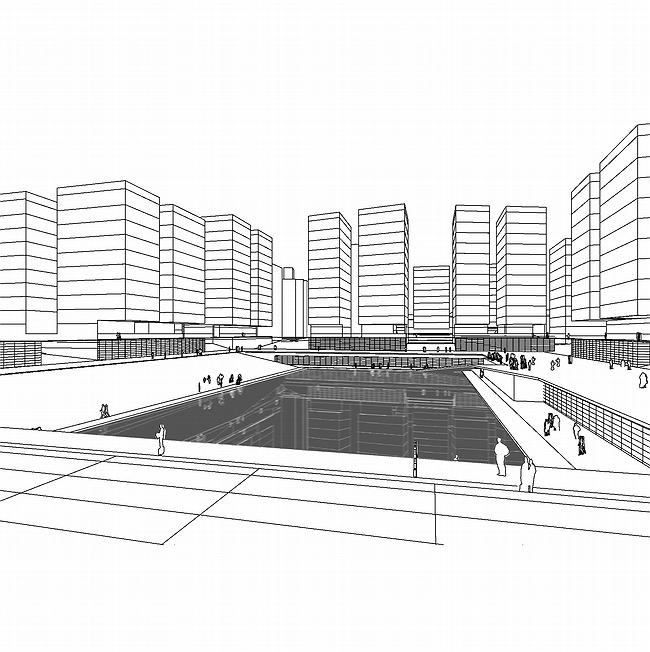