Park in the memory of church

This project by Pavel Andreev for Ostozhenka district is unlike everything that we are used to see here, may be the reason is that one of the client’s is Zachatevsky Monastery. The project includes restoration of palaty Kireevskogo, construction of a new small memorial park in the place of Voskresenija Novogo church that was blown up in 1930’s, main part of which will be ruins of the church foundation. It will be excavated and treated for preservation

Nowadays the area between Ostozhenka and the river that developers call the ‘Golden Mile’ is one of the ‘overheated’ centers of new building constructions in the center of Moscow. Elite residence cost much, admires of modern architecture come here for sightseeing, those who are fond of Old Moscow that is vanishing are sad that quiet streets have lost their charm. Well, this is true – there is hardly any great monument of architecture left, most churches were pulled down in 1930’s, but there was a special atmosphere of the area and now it has totally changed, to be more exact it is in the process of transformation into a wealthy part of the city.

So, Ostozhenka and Zachatevsky monastery. The monastery owns the building of palaty dated 17th century located on the south-eastern part of the site, well-known due to Pavel Kireevsky, a famous Russian folklorist who lived here in the beginning of 19th century. Palaty are tall and they have been in dreadful condition for long time. The restoration of the palaty is the main idea of the project. The monastery has found the sponsor to the restoration and transformation the building into a monastery hotel. The investor has a few small office buildings nearby which are being built in ‘regeneration mode’, this means that on that place used to be something (a wooden house), and now there is a vacant place instead; so, it is allowed to make constructions there, according to height restrictions, thus restoring area density.

In this ‘mode’ the building comes out – the only one in fact, but outside it looks like there are four of them. On the line of Zachatevsky pereulki there will be three buildings constructed– the two small one-stored, like wings of a typical town manor of 18th century – faced with stucco, without columns and with baroque ‘eared’ cases. These ‘wings’ flank the garden in front of the Kireevskie’s house (the hotel) and the idea of the façade design is obvious – the look is of a construction dated before the fire of Moscow in 1812, in such could live the famous dweller of the palaty. But functionally the ‘wings’ are ‘engineering rooms’, there are elevators inside that move to underground garage. It occupies the whole construction spot, keeping the required distance from the monument of the 17th century. The third volume that fronts the pereulki, is larger, its overground part is of two storeys and the façade décor is the same – yellowy white, stucco. Altogether they are to represent not large Moscow manor of late 17th century; or its imitation of the mid 19th century. In short, there might be argues on real necessity of such ‘copies’, a political issue mostly, but it is true that the three buildings perfectly fit the idea of ‘regeneration’ - almost an ideal. If everything will be done well, in a few years passing them will be hard to define they are new.

The fourth volume of the building-ensemble is done in contrast design. It is all-glass, hi-tech and is simply cut into the ‘body’ of stucco imitation-regeneration at a straight angle. This building is parallel to Ostozhenka, and shows its glass corner to Zachatevskie pereulki rising above the stucco wall of the pseudo-manor adding intrigue to the ensemble. It openly contrasts to historism of the rest volumes, swiftly changing from the copy to candidness of glass and steel. The fact that the building is boldly unfolded, but not just placed parallel behind the ‘historical’ façade, hints on a kind of a story – a new building is cut in the old one. Actually, it turns out visa versa – stucco-stylized volume surrounds the glass parallelepiped as if it has always been here, and when the period of historism came it was built up. Obviously the ensemble leads to such thoughts purposely, and its vagueness in the latest Moscow priorities is quite appropriate now. .

Another part of the idea is even more interesting – this is the accomplishment project of the city park neighboring the monastery’s site on the corner between Ostozhenka and Zachatevskie pereulki. Here used to be Voskresenia Novogo church – small, with five domes, dated late 17th century, with pointed Empire bell tower and the frater that extended towards Ostozhenka way. Just like nowadays Vladimirskaya church of the same period occupies the pavement on Sretenka. The church was pulled down in 1930’s, and in the beginning of 2000’s there were discussion over its reconstruction along with many destroyed monasteries – but there was no any real action taken and now it’s hard to say whether it was good or bad. In this case the reconstruction and the construction on the whole is delayed because the park has the official status of a natural complex. The city owns the park, but in monastery they have asked to place a symbol in the memory of the destroyed church.

The architects, Pavel Andreev and Sergey Pavlov, who is also the head of the project, have found a wonderful solution to the problem – they suggested to bare foundations of the church and establish a kind of museum. Most of the walls are on the territory of the park, their outlines will be marked with stonework, theoretically covering the real ruins. In Pskov ruins of churches, pulled down on the order of Petr I for earthwork, are shown in the same manner – churches of Davmontov town, their foundations are protected with stonework and open for public. Such methods have never been used in Moscow, and if the project will be executed, it will be the first of the kind.

The entrance to the park will be constructed on the place where there used to be the entrance to the monastery, a glass arch will be placed upon the foundation ruins. Glass will have function of an exhibition case – materials on the history of the destroyed monastery, and Ostozhenka, will be presented there. Further, in the mid of the old frater will be the path, imitating the floor covering of the monastery and leading to the church naos (chetverik), which platform will be a few steps lower, and in the middle there will be a small chapel-stela ‘the church monument’. The fence around the park will be similar to the old and inside – except ruins – there will be the two curved paths to the other two parks’ entrances. So, there will be the park in the memory of monastery, not large but very delicate towards ruined heritage. Frankly, in 1930’s there were plenty of such parks created, applying this method – excavating and then creating ‘park-museum’ – at least part of those parks and this would be a great benefit to Russian culture. 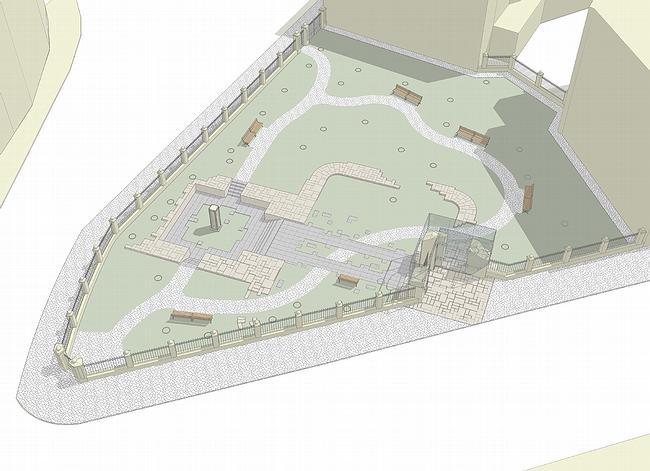 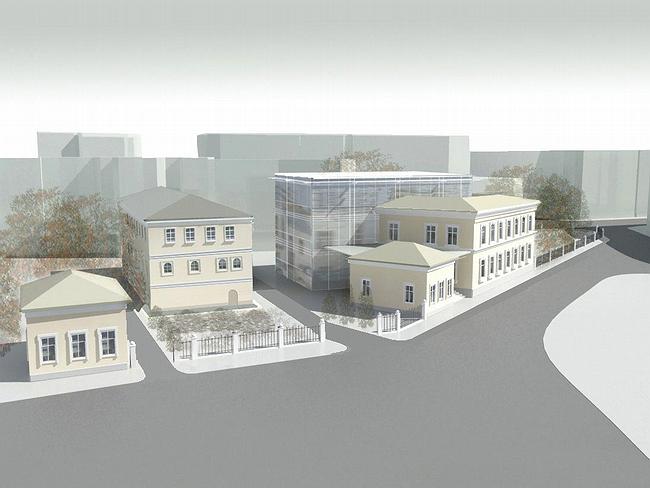 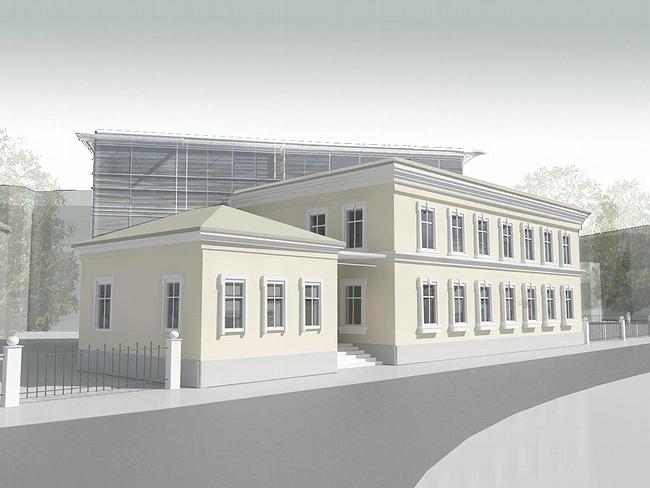 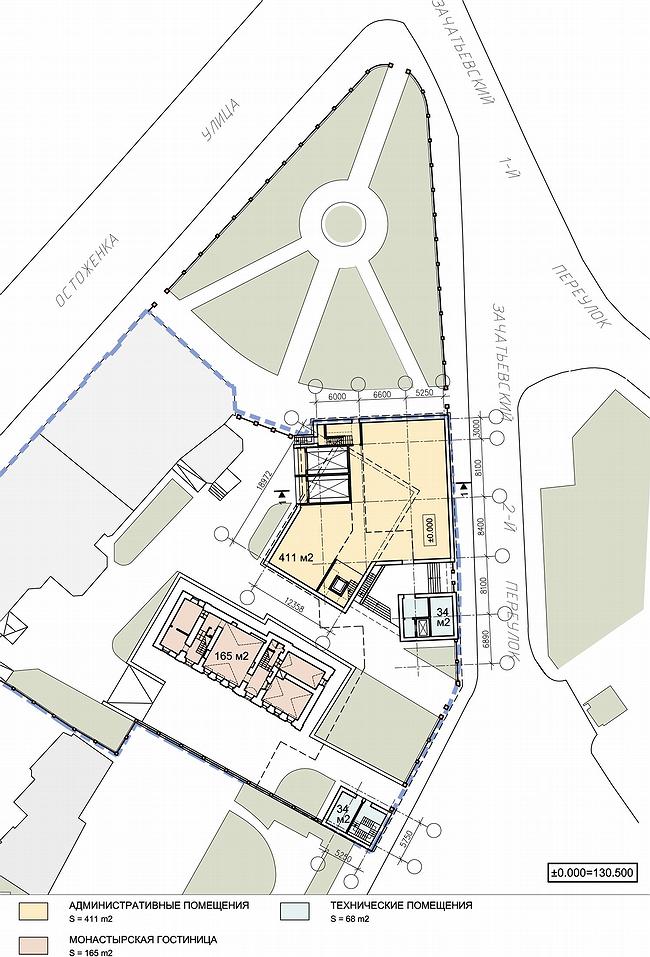 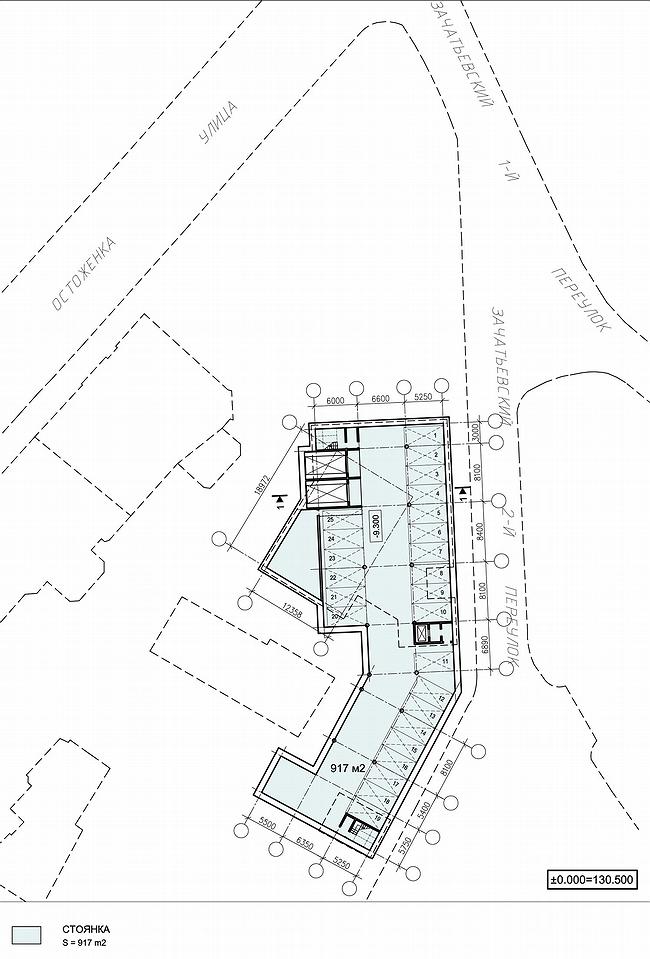 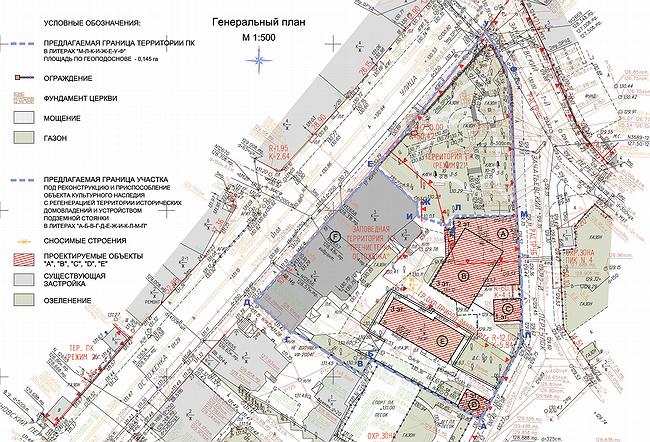 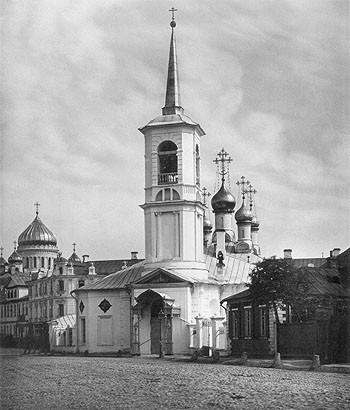 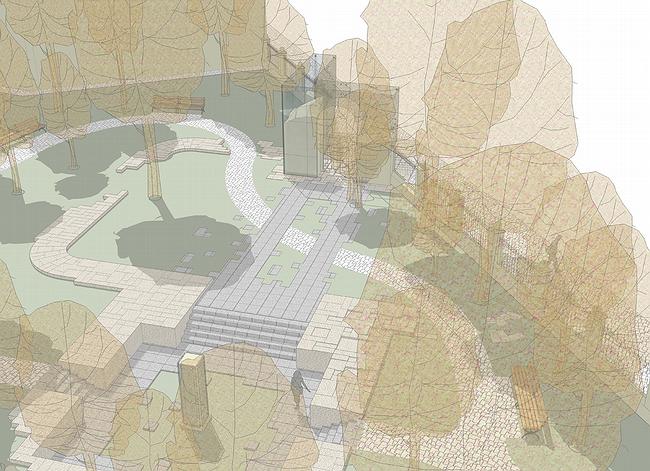 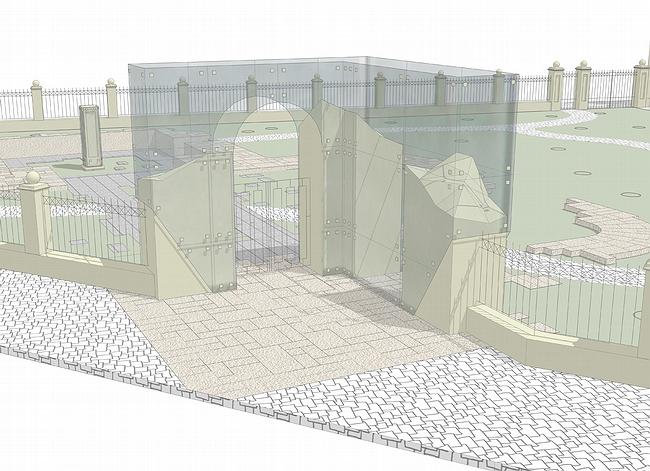 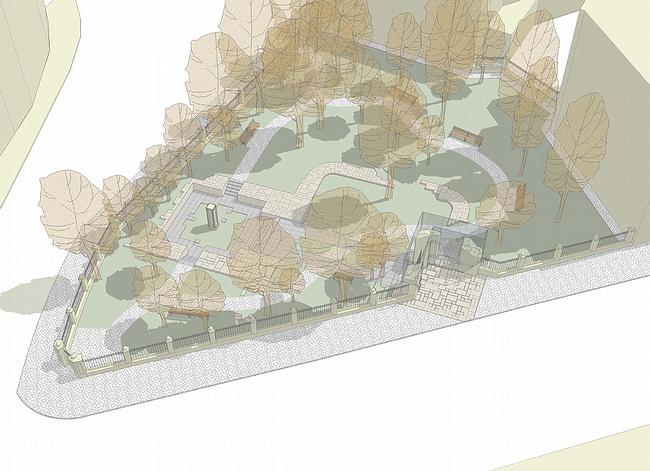 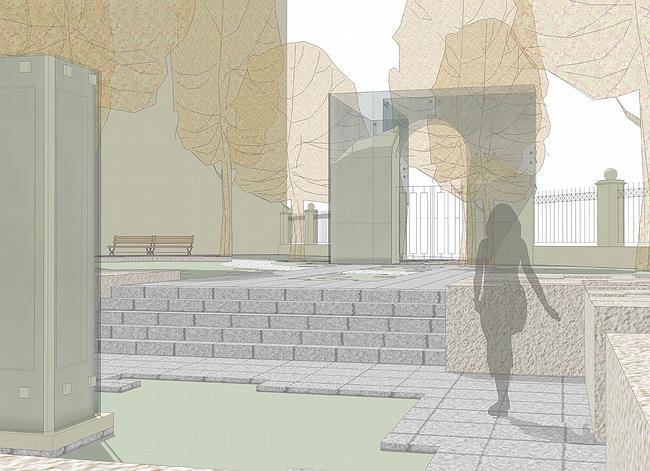 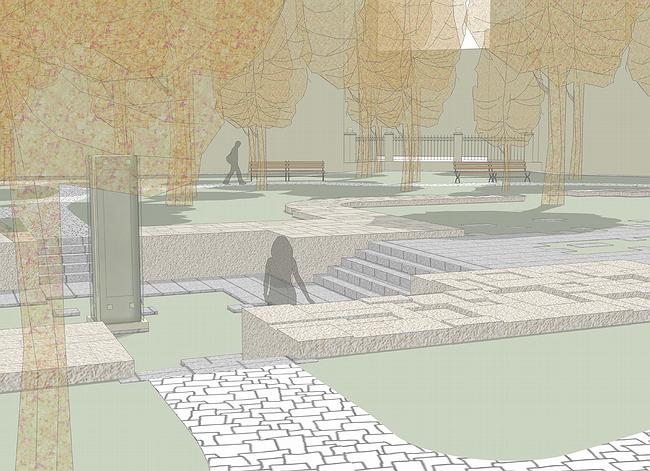 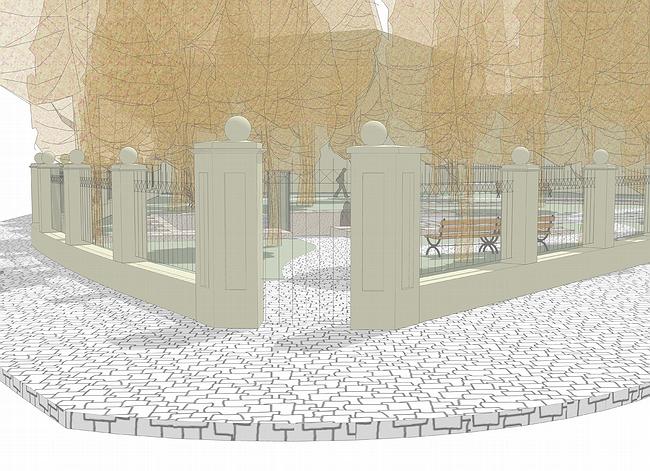