The building that will be constructed on Mozhaiskoe highway consists of 11-storey "stone" arch and a futuristic object embedded into it at right angle. The first impression is that within ruins of Roman aqueduct a portal has opened, like those stargates in a movie and an alien is coming down to our planet

The impressive composition is made up of the two office buildings almost equal in volume and proportions. The first one is glassed and is extended alongside the highway, the other one is a generalized image of a half destroyed antique bridge: one arch is safe and the other starts from the roadside and breaks in the middle. The place of the hypothetical «crash» hangs over the sidewalk and turns into the remote console-balcony with the view to a small square «Kuntzevo» that is on the opposite side of the highway and further on, to the University, Troekurovo and Troparevo.

The building in the shape of arch will be another "Roman" accent on the line of Kutuzovski avenue, where in the end of 1960 was constructed the Triumphal arch by Bove. The distance between them is large for pedestrians, by car it will take about 5 or 10 minutes – this allows to draw up a logical link between the two strong landmarks of the road to the West, Mozhajskoe highway is such here, having interpreted as a Roman or leading to Rome. There is the town-planning meaning of a building that is not large according to the modern standards, actively takes part in interpretation of the city texture, it structures, finishes the existing "text" – so, already on the design stage it claims to become a new sight of Kutuzovka.

The "Arch-bridge" is fronted with rustication that imitates stone and is cut with square, rectangular and even constructivist corner windows. There are more of them from the site of the next house, there they respond to a rigid rhythm of its panel grid, and further, to arches - windows become smaller and rare. Scattered in a purposely chaotic order windows do not disturb, but rather enliven the stone-like surface of the arch – comparing to its size they look like traces of fallen stone blocks, within geometrical frame developing the theme of ruins. At the corner, viewing the highway, the stone laying thickens, turning into blurred archivolt of long thin plates. Altogether they quite precisely reconstruct an impression of a Roman concrete - huge, with rare chips of the stone mass.

The climax of the architectural story is in the moment where glass and stone parts cross. The shiny rounded "nose" goes under the "undamaged" arch of the "bridge" and comes out on the opposite part. The flat area under the arch is glassed – the "nose" as though is overcoming some substance, this is why the piece of the joint looks like spread by a film ‘teleport’ from a fantastic movie.

Altogether reminds of a city ruins exclave, through which the aluminium-glass ‘today’ tries to get ‘inside’: a crosswise skyscraper, an ambassador of the present, stands at some distance ‘from that’ side’, and the ‘advanced guard’ meanwhile has found an creep hole and opened a portal under the ‘ancient’ arch. A significant and precise image of modern relations between architecture of the center and suburbs has shaped. With this story the building greets its audience that leave the city by Mozhajskoe highway.

Fusion of varied forms by ‘piercing’ one through the other is Alexey Bavykin's favorite technique that derives from the times of ‘plastic’ searches of ASNOVA in 1920’s. But now it has another meaning, more then formal - figuratively old is opposite to ultra-new. Still, at Arch-Moscow 2006 the architect represented the exact historical analogy of his project - the Roman bridge by censor Emilia (The Pons Aemilius (today Ponte Rotto) 179-142 BC.). It is interesting because it has got a semicircular form cut into the arch – this is one of the supports (‘bulls’) of the ancient bridge. So, the form can be understood as entirely borrowed from ancient, but hardly created over avant-garde design, that in fact does not remove the plastic diversity of the two parts of composition.

In general, one of the most noticeable peculiarities of the project is the keenly directed interaction of history and the present day. Unlike the antique prototype with its Corinthian capitals, tritons and mascarons, there is not a single order form - only an image of a man-made stone massif, where like in a fine theatrical scenery, impression and sensation, a smell of historical memoirs of different sorts are compactly put into a still bank of human experience from Romans to architectural avant-garde. It is interesting, that they all live and interact within one story - the bridge similar to Moscow rostokinski aqueduct, laying of flat planes, resembling something Rome-Byzantium, and corner windows of avant-garde, successfully playing parts of lost blocks of Cyclops laying. Driving up, from afar, one may think the quadras that compound the bridge are of a window-size, but having driven closer you might realize this is the elegant stone facing. All this is quite like scenography, to such scenery that itself is a performance with the theme of history of architecture. The arch is not a copy, not revival and not classicism, but a historian reflections, and when this historian is an architect, those reflections transform into a building. Or a building is in a shape of reflections upon entire history of architecture, including avant-garde.

The glass corpus-antagonist in contrary to historicism of the neighbour is filled with hints to the nature. The two oval supports are made like a hypertrophied long poplar trunks - approximately in the middle they split into two ‘wood’ springs: one from ‘this’ side holds the ‘nose’ piercing through the arch, the other – from ‘that’, sprouts through the corner with the air bath balconies. This idea was applied by Bavykin for the ‘poplar house’ in Bryusov pereulok, and probably, has come out there. But here the trunks are generalized and their meaning is much wider. The ‘bridge’ is urban and stone, it is penetrated with humanitarian historicism, and the intrusive into it glass alien is not just ultra-new, plastically flexible, but also is an element of nature. This reminds of Kipling’s jungle that enlaced the stone city, and it seems after all that the impulse of the present biomodernism is quite similar to those jungles. 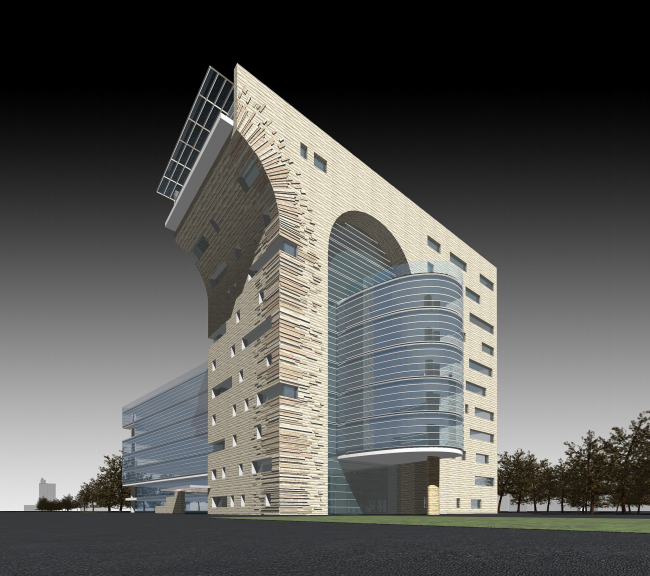 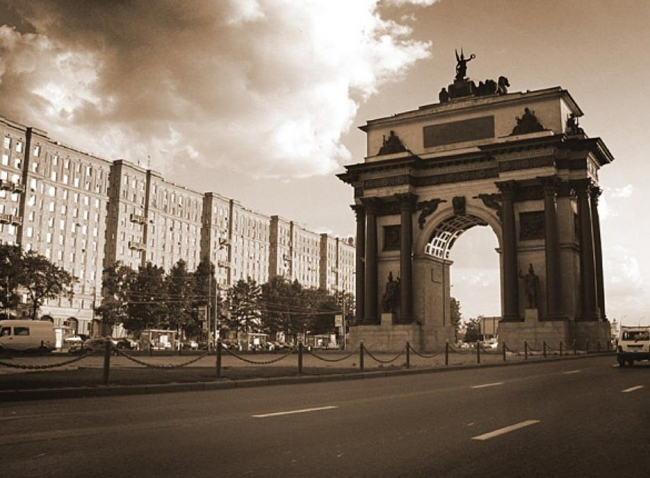 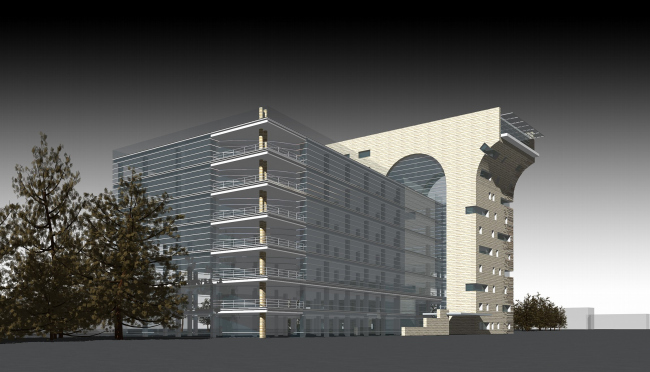 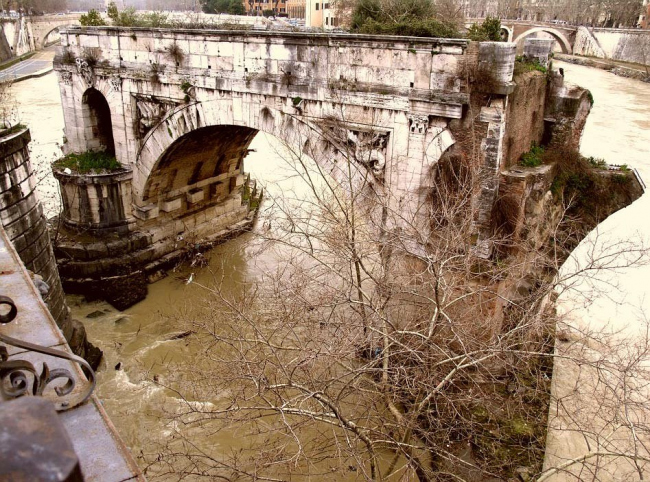 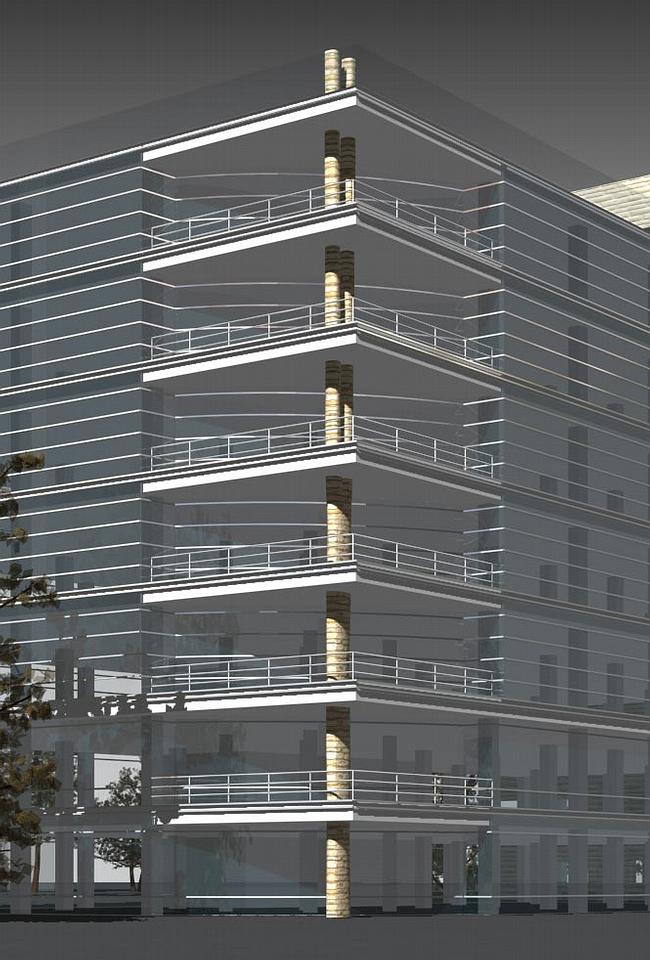