Fantasies on a theme of modernism

The project of an apartment house which will be constructed near to a hostel of students of Moscow Architectural Institute, seems to be architectural fantasy on a theme of its neighbour and the predecessor

The house will be constructed on a triangular site before crossing of streets Ordzhonikidze and Vavilov near to a hostel of students of Moscow Architectural Institute (the Architectural institute acts co-investor of the construction). The hostel is a good example of a modernism of 70th; measured lines of tape windows which because of vertical crosspieces look dotted, geometrical simplicity of two volumes which have merged in one point, at an end face cut by a thin strip of glass on two imagined plates – this building is not from ordinary, right as a jack of young architects should be. However now it is not in the best condition, to put it mildly.

The architectural hostel became a starting point of the project and the main component of its city environment, in the rest consisting of industrial zone - a taxi base and the closed factory named after Ordzhonikidze. Moreover, the project provides very delicate reconstruction, more likely even sanitation of the hostel – the frames will be replaced, the facades will be put into order. The architects have refused from the radical intervention from the very beginning - Nikolay Lyzlov approaches to this building as to an interesting monument of its epoch which have left recently, but still not less valuable: « … it is good, the architect speaks, that we are now anxious by the destiny of Russian avant guarde, but it seems, that it is right time to pay attention to the destiny of Russian postavant guarde, the seventieth » - the architect speaks. And still: « Yes, we love this architecture! ».

The new building will be higher then the 16 floor building of Moscow Architectural Institute hostel, but not much. It is impossible to construct a high tower here, though the site is surrounded by dullish industrial buildings, but at some distance the monuments of the architecture, the Don monastery and constructivist quarters are situated. Firstly architects wished to make the new house step, gradually raising from a hostel, but eventually have stopped on the more collected and compact Г-shaped volume. Between two buildings – the old and the new one, the garage rising on one floor from the ground and forming unostentatious stylobate  will be constructed. On a roof of garage the court yard with the children's hills-swing, raised above a level of sidewalk and thus separated from casual passers-by will be arranged. One wing of a building cuts very high passage, its extended proportions - tells Nikolay Lyzlov, are caused by insufficient insolation of these parts of the house; it is impossible to place apartments here, therefore the space above the passage is left empty. However this is a successful place for the studio of the artist, argues the architect: if there was a customer, it would be possible to arrange spacious, in two floors in height workshop in the top part of an arch.

So, the house looks as the younger brother of the 70th neighbour. They are similar: laconism of volume, the form and proportions of dotted-tape horizontal windows, and at the same time – they are not similar, at once it is visible, that one house is thirty years younger. The house is changed by means of asymmetric scenery: the rectangular grey-black spots scattered on the facades which Brown composition is picked up with glass bay windows, greater, uniting on two floors. Behind them - the best apartments with glass sights walls. Chaotic «painting», not interfering in the "body" of a building, changes the impression of the architecture greatly. Simplicity disappears, there is a movement, the form loses the evidence and laconism. Originally architects wished to paint a hostel similar rectangulars, but then have refused this idea, completely having kept its shape. As a result on rather small site there is the ensemble of two constructions evidently opening before the close spectator history of a "pure" modernism of our time: here - the beginning, and here – the continuation, directly mini-reserve of a good modernism. 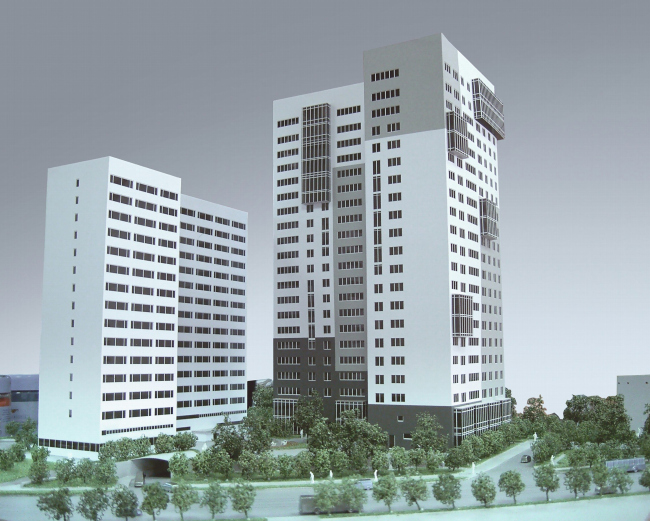 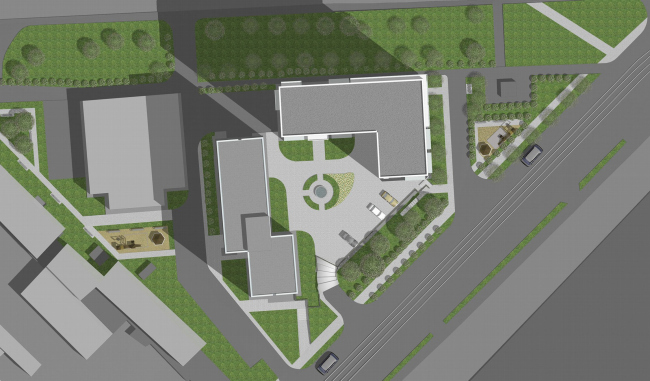