In the beginning of Nishznaia Krasnoselskaia street the construction of new office building under Alexey Bavykina's project begins. As soon as the construction is finished, this small house has all chances to distribute its charm at the whole adjoining quarter

The city space in the area of Nishznaia Krasnoselskaia street now looks sad enough. Here comes to an end its conditional-cultural, adjoining to «Baumka» area of "German large village», and sad enough mix industrial and the residential buildings, lasting up to Three stations begins. The border between them is the bright-turquoise temple of the Epiphany in Eloxove, to the majority of muscovites known for that during Soviet time it was cathedral - the main patriarchal cathedral, and for guides and tourists it is remarkable because once there was a wooden church on its place in which the newborn Sasha Pushkin christened. «Behind a back » stuck round by the columns of rollicking elegant cathedral Nishznaia Krasnoselskaia street leaving to the stations if not to search specially, somehow is not especially remarkable: sharp breaks of “a red line”, two inhabited brick houses - xhrushovskii, behind it breszhnevskii, careless cases buildings of a factory of accounting machines. Between these, in general, poorly remarkable objects build in Alexey Bavykina's office building.

Considering the project, it is necessary to notice some atypical for modern Moscow features of the designed construction. First of all, the building wonderfully manages to distribute the charm to the quarter all around it, thus not leaving physical frameworks of the allocated site. It is not evident - but decorates, and it would be desirable to tell - treats this uncomfortable place, imparting it the unostentatious intrigue based on the attitude of the new building to surrounding houses.

The house expresses its judgments about the next constructions extremely clearly by means of own, architectural means. From a factory it is fenced off by metallized "board" - illusion of the zinced leaf bending around the house from the back party and embracing its basic volume by the peak hanging from above, created by means of front panels simulating to steel shine. On the contrary the building "grows" to the nearest apartment house by a smooth stone arch – and it is possible to think, that it will lean on by the way turned up "neighbour". However on modern norms such reception is impossible, therefore, Alexey Bavykin tells, five floors adjoining to an apartment house is the hinged console completely belonging to the design of a new building. The original decision has allowed to achieve much, it gives customers additional office areas, to city - necessary under specifications entrance in a court yard, and to the street it gives integrity and even some harmony.

The matter is that the wide arch of the main "stone" facade leading to Nishznaia Krasnoselskaia street, solves at once some problems. It «connects» a red line of the street, smoothly connecting two next buildings and at the same time - creating an illusory bend of a trajectory; with its occurrence some of the isolated boxes in the neighborhood turn to the intelligent line which is identified as an attribute of the city cosines peculiar to the center and lost on surburbs. If to look more widely, the same arch of a facade becomes refined "side scene" on background of Eloxovskogo temple, building around of it the "noble", intelligent space causing in memory fencings and semicircles of baroque ladders of Yauzski palaces which rests live the days nearby.

By the way we shall notice, that the new building is under construction on a place of the two-storied house now leading on a red line of the street - in memory about it the entrance of brick semicircular arch moved here and it marks a place of the predecessor. Behind an arch there is a lawn-front garden with three trees, a path under the glass peak: the fragment of the equipped space belonging simultaneously to the city and the house.

It turns out, that the house not simply reflects the main historical conflict of the quarter, and lives it, plunges into it and comes up, armed by own decision of a local town-planning problem. It connects not only a hole on a line of the street, and evidently unites two diverse "matters" - the "stone" part passes through the "metal", sprouts from it by the line of rectangular balconies, reminding a joint of two details made at a factory, very different, but precisely driven one to another. All together unostentatiously darns a city fabric, does to ordinary-looking street small « plastic operation »: to add here and there - and look, it becomes already pretty. 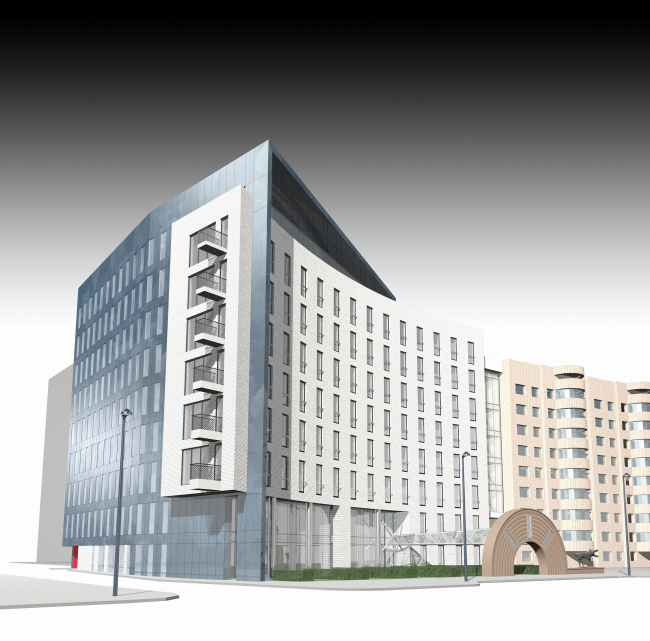 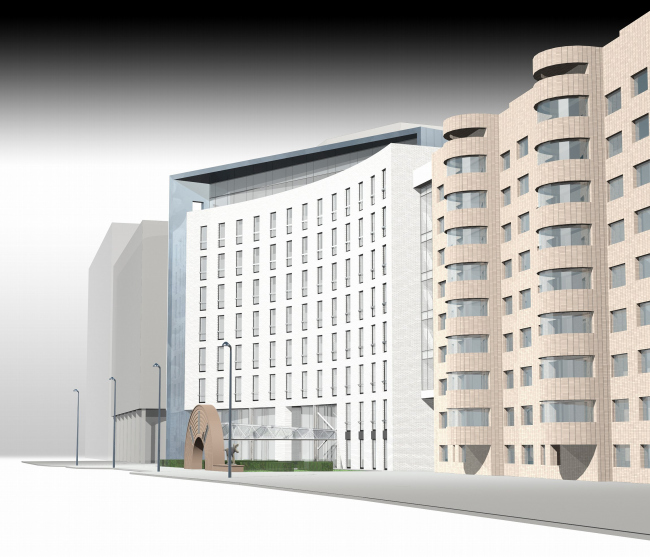 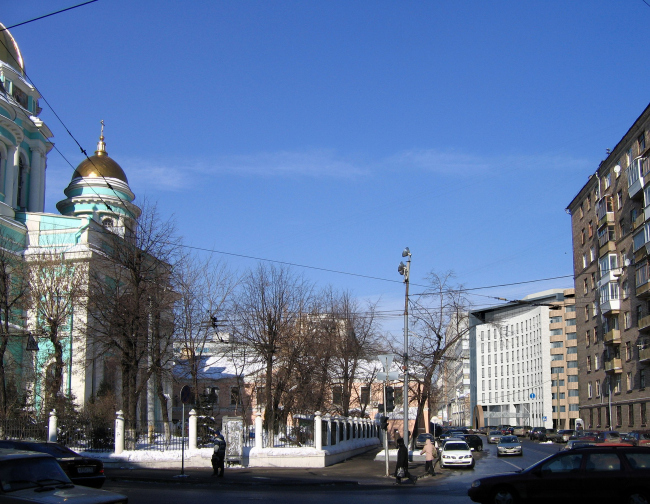