Snail on a slope

The project of the ‘house on Mosfilmovskaya’, the first de luxe residential skyscraper in Moscow, took the main Arch-Moscow award last year. In the interview to the Architectual News Agency, Sergei Skuratov has told about the changes made over carrying out the project. By the last stage of edition, the building has become much taller, the highest point has increased from 150m to 200m, and more laconic, having turned into a giant monument, resembling a huge snail.

In the architect’s opinion, the area, where the construction has already begun, is likely to be most appropriate for implementing the great idea. Extensive, remaining almost inbuilt, complicatedly bent area of Setun river valley stretches from Poklonnaya Gora up to the Mosfilm Corporation. So, the architecture of the future skyscraper responds not only to the dispersed settlement, but mostly to the environment, looking like rocks, shaped by air streams.

The complex consists of a 200 meters high tower and a slab-house (120m), joint by the small longitudinal building. According to the initial design plan, the first one, the highest tower, was helical and rotated through 21° - this, enriching plasticity of the prismatic volume, allowed to achieve maximum variety of spectacular views from the windows of future apartments. In the final design the smooth curve has changed into its neat geometric imitation: the walls slightly bend, so, the obtuse angle of the first level is developing into acute angle, and visa versa. The tower looks like a long neck of an animal that have turned back to see if everything is all right in the rearward area.

The huge size is set out by the four colors of the main tower gradually changing from the radiant with Carrara marble whiteness top, to dark limestone of the lower levels and black concrete legs. The coloring is supposed to create a glow effect of the skyscraper – even in a gloomy weather it will look like a big inhabited rock, that have caught a sun beam hiding behind the dark clouds

The other building is colder and softer, though no less sculptural. Its outline scales down closer to the top and bends a little towards the ‘elder fellow’, and this makes the ensemble more complete and ‘alive’. The facades are entirely glassed, but certain coldness, common for glass, is overcame by unusual surface plasticity, which resembles a ‘wicker basket’ as Sergey Skuratov has said. Besides, the delicate relief of the walls is complicated by the ornament of windows – there are three kinds of them: transparent, non-transparent and blind.

The small longitudinal building uniting the two skyscrapers – is a hypertrophied stylobate, lifted 17meters up and resting on the ‘legs’, placed at different angles. The house now is very similar to a hyper-large insect, a «huge snail moving its 'forty legs’, extends its neck and turns around, trying to see, if everything is ok with the small house of hers» - poetically tells the architect. 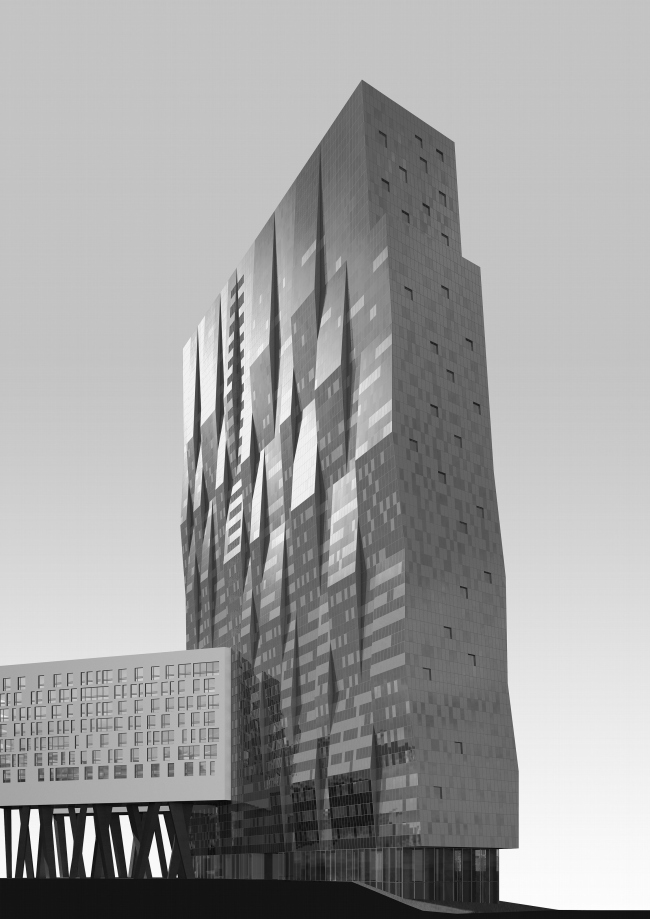 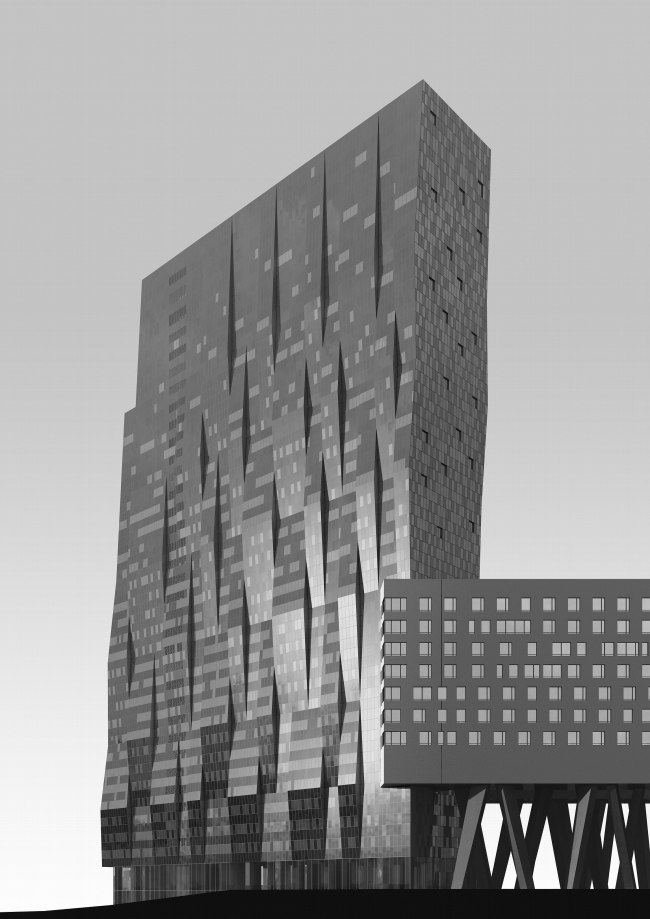 floor sections drawing of the block 'A' - the 200-meters high tower (12, 27, 31-storey). You may see the floor-to-floor change of the outline - a technique to imitate helical winding effect