In the complex, combining tennis court and hotel, the new architectural typology was born – a house-tribune, from its balconies one can watch competitions.

The client - Tennis Federation – has quite a huge area on the border of Leningrad highway and natural park, a green zone in front of Himkinskoe water basin. Vladimir Plotkin has been working for this project since the end of 1990’s and, as sometimes happen, projects start living their own life, if it takes a long time to finish work, life dependent on client and architect, but still their own. And now, it has turned that way – one project has gemmated, another one has joined, a new building has been added, as a result an original symbiosis has shaped - the house-tribune, which residents don’t have to leave their own balconies to watch competitions and trainings.

Actually, it’s not a house, but a hotel. Its 18-storey building is an absolutely new part of the complex, it does not continue the initial design of the complex, it’s the core, the demonstration court, or the open stadium for tennis competitions joins it from the south; the grandstands can be dismantled – in other time it can be used for trainings. The demonstration court has initially been designed as a part of Tennis club, projected by Plotkin in 1998-1999; its site is located nearby. Places for the audience round the court from the three sides, and from the forth they go through the lower circle of the hotel viewing the stadium with continuous numbers of open loggias, forming a kind of ‘vertical tribune’.

From the North side, another building is attached that was designed two years ago as a separate construction. Its volume stands 20 meters away from the hotel and is connected with it by the passage; it has been planned that here will be recreational and business places: shops, restaurant, offices.
All this is inserted into the horizontal volume spread on the ground, which keynote is care for the natural area. Most part of the ‘usable space’ is gathered in a Corbusian fashion on the top circle, that is like a huge ‘specific sandwich’ – on top and on the bottom there are concrete plates of floor and ceiling, band of glassing is between them; giving to those who are inside the nice views on the park, and lightening the façade massifs; it will be possible to bask in the sun on the flat roof. Half of the top floor is hanging over the ground, like a very long console, and is resting on thin "legs", clearing for pedestrians the way to bank of the water basin.

The hotel is the "newest" and the brightest part of the complex. Its 18-storeyed plate strongly cuts the horizontal through, although does try to spare the natural landscape, - the plate is turned to the highway by the narrow end face, wishing to reduce a visual barrier to the park.

The southern facade-tribune, filled with deep loggias, is lined by Plotkin’s individual design. Parapets of balconies are glass, the whole volume seems transparent, delicate like crystal, having a little bit of Southern energy.
From the opposite, northern side, the transparent parallelepiped is covered, as if with a board, the white "leaf" of the stone façade, evenly perforated with round windows. Circles bring a range of associations, from a radio receiver of 60’s to the Konstantin Melnikov's well-known house, it’s widows are also evenly spread, only they are rhomb shaped. Another parallel – widows have got lintels, placed at different angels: diagonal, horizontal, turned to the right or to the left. Dance of window frames puts the form out of composure usual for circle, makes windows different and makes suspect its resemblance to great works by Melniko. The architect dose not consider the appeared analogy with Melnikov to be main, as he has noticed, the solution was suggested by allegory of tennis ball – a kind of emblem signboard on the whole building, telling about its purpose. Anyhow, it has turned surprising and fine, of pure modernism, thinned down with the architect’s favorite asymmetry.. 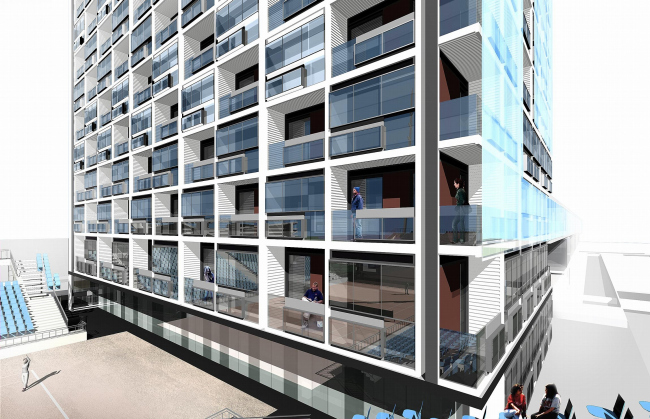 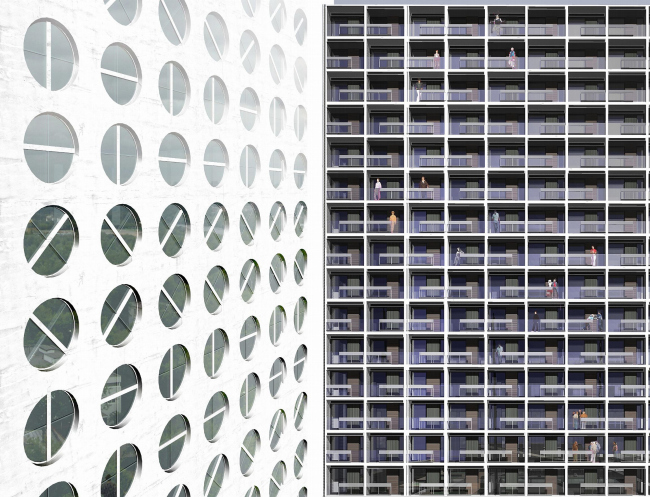