Kempinski hotel complex in Nizhni Novgorod is bright and diverse. Its architectural image is deep with its color, ornament, and is built around a golden tree with a firebird. It is easy to tell ornamental and fair specific of the place. So fantastic and colourful Nizhni Novgorod appears city according to the architects SPeeCH.

The project “Kempinski Plaza” on bank of Grebnoy channel in Nizhni Novgorod is a mixed-use complex of four buildings. Only one of them (the most visible) will be a hotel, the other will be occupied by offices and a conference hall, and the rest are for apartments. Quite modern planning. Besides, the place is beautiful and advantageous – from one side there is the channel, on the other – park, city streets, but a little further. And the architectural solution is modern – buildings stand in a tight raw, curved along sinuous line and this provides incoming sunlight and opens beautiful sights. There is only one line of buildings, but all the facades are different – constructions can be divided according their funcions and vary impression the complex makes, it is quite giant on the background of 5 and 6storey development of the nearest street.

Methods used here are known from the other projects by SPeeCH – a snake like curve, striped stone jalousie, a tree in the yard, different facades…In the result effect is different. The last is pressed here on the considerably small territory. In “Gardens of cultures” on highway Pyatnitskoe such variety is shared among blocks and generously diluted by trees, but jeer buildings of the hotel complex are built in a line and can be taken as one piece. As if in an English garden of Ekaterina period, a Gothic, Chinese and countryside pavilions would be built a line along the curve of the main avenue instead of being hidden on a considerable distance from each other.

However, in the project for Kempinski by SPeeCH there is no diverse in styles, but more likely – diverse in ornaments. Architects like ornaments in principle: it is used in each project, to a greater or lesser degree; the first issue of the “SPEECH” magazine is devoted this theme. However, in this project the degree is unexpectedly high even for the authors. As though it forgot where it is – it is not an ornament, not an addition, even not an ephemerous picture applied to the building. Somewhere the ornament deforms the prospect, somewhere whirls up the surface, motives replace each other with such density one might think that is connected with activity and variety of facades.

General impression is colourful and bright, the word "fantastic" fits better here. It is supported by the golden sculpture in the middle of fountain at the main yard – tree with a firebird. This is not the only project by SPeeCH when a tree becomes a notional point of the project. Only there was a true tree in the office complex in Odessa and here is gold, and reminds of mechanical amusement which in XVII century were given by foreign ambassadors to Russian tsars. The tree is important, it is the core of composition, but – does not answer all the questions, in particular, does not explain the unexpected violence of colors and patterns.

Apparently, the answer is contextual, or, so to say, geopolitic angle. So called “genius of the place”, hero popular among architects in general, got its own version the SPeeCH project. In the comment to the project the authors just mentioned that they used “methods of the historical development”. But they twon development itself is not very bright (no brighter than in Moscow). But in the culture history of Nizhni Novgorod there are at least three base points.

The first is the 17th century, the time of bloom of the trading city. Almost all the buildings of 17th century in city almost are white, not without reason the architecture of this century is called “uzorochie” [ornamental]. And there is a well-known “postcard” view (probably, familiar to all who have once been to the city) – where strange strobile-like bulbous domes of Stroganov Rozhdestva church is shining on the background of Volga vast. So unusual, but undoubtedly attractive church domes become fashionable on the boundary of centuries, before the end of “Naryshkin style”, they appeared in Moscow as well (Vladimirskoy Bogomateri church on Nikolsakaya)but they are mostly characteristic for Stroganov churches. Not so important for our story, but the fact that strogonov’s “strobiles”, only 20 time larger can be recognized in reddish rhomb ledges of the hotel’s façade.

The other theme – well-known Makarevska trade fair in Nizhniy Novgorod, the symbol (and a source for a long time) the city’s prosperities. A trade fair is originally a colourful event, and the point here is not the late building of industrial 19th century, but the image that comes to mind when one hears the word. A fair – something Rabelaisian, a congress of everything from the world, never-ending fun, horn of abundancea, where the more of everything and less room, the better. This carnival and trading happiness is the symbol of Nizny and the largest part of its life, so the image of the city have same shade. And must add, for 70 years of the Soviet system, Russian fairs were totally ruined. Event organized toady are just p provincial business exhibitions, or municipal fakes of fun. But there remained a fairy tale, in books, in films – and it is more florid, bright and attractive, than the reality. Nizhni is so to say the capital of lost Volga region fairy tale.

And the third theme is the architecture of Nizhniy Novgorod of 1990s – beginning of 2000s. People of Nizhni were the first to try to bring back the fairy tale of their city, they created florid, home-made in a way, but a cosy, sincere and attractive Volga region image. By the end 1990 there were few themes for architectural discussions in the capitals – everyone spoke of Nizhni. Bright, in good way original spirit of Nizhniy Novgorod architecture runs on in Kempinsli. Only enlarges it four times (may be, proportionally to increasing of sizes? – most development in Nizhniy Novgorod are low-rised…).

Thus, in brightness and a variety of facades, in the magic bird there can be recognized at three Nizhniy Novgorod fairy tales. Obviousl, SPeeCH is in search for the theme of Nizhniy Novgorod Volga region, like earlier it searched for the theme of Moscow (art-deco and stone). Nizhni appears to be florid and fantastic. Here is seen another approach to the context, than popular among our contemporaries. How do architects (and those who approve projects) see a context? First, they visually analyze. They use panorama photography and see that the building does not stick out anywhere (why though it can’t be seen from everywhere?). This a method to hide a building cutting off its head, so to say. The second way – mimicry – visual as well. Authors look around, at the nearest constructions and construct a new house of the same color, materials and soon. There are another (less superficial) ways of reflection on a context, we have mention such, a project can be inspired by the nearest known monument of architecture, town-planning dominants of its environment … And so on.

SPeeCH’s characteristic method of considering a context, is historical and cultural. Instead of copying the hero of the place, architects make attempt to talk to it and find out what it is about. The result is an architectural reflection about the place – what it is like, wherecame from and when became the way it is now, some kind of alive essay interesting to analyze, an interesting story of a regional specialist. So,the Moscow center becomes Byzantian, the Stalin city –stone-classical, and suburbs turn into a park filled with cultural reminiscences. So, for the Volga region a “fantastic” image is created. 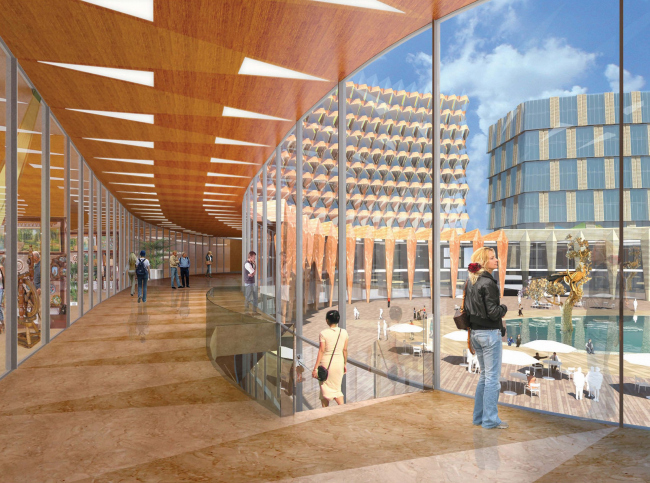 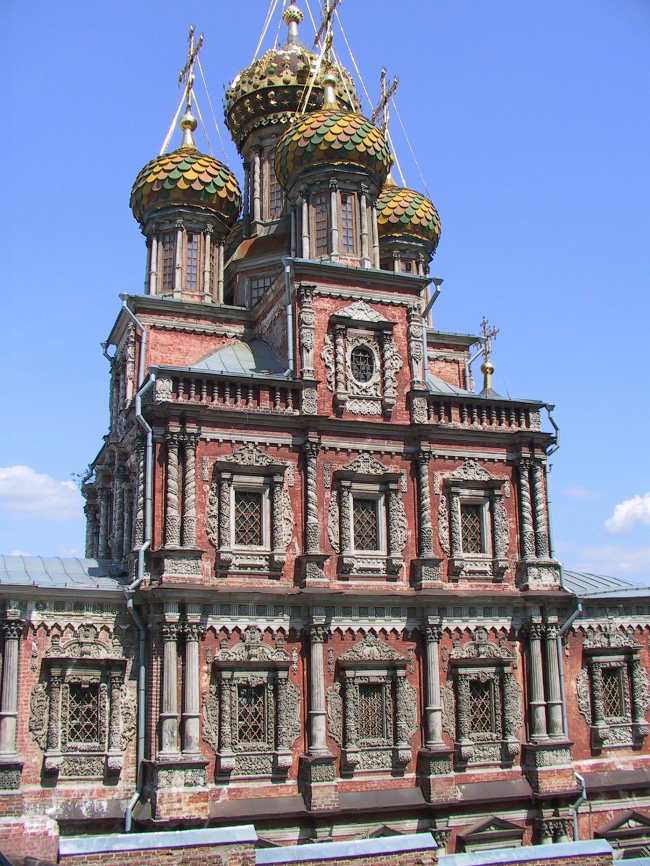 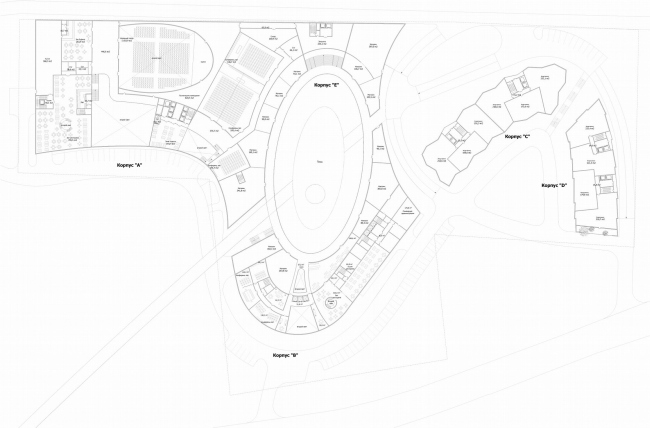