Rule of a garden

Project of the residential complex for 20 thousand people “Gardens of cultures” has the three components: urban conveniences, nature and allusions to architecture of various European countries. That is not easy. But it appears to be achievable and even possible to create a balanced image which smartly applies classic methods within modernism.

For the past 5-6 years elite settlements have become rather popular, they have stylized design of a particular epoch or a country – Italian style settlements, or, say, English. Along the monoculture ones there appeared a concept of multicultural settlements – such would be a “City of millionaires” somewhere in Pyatnitskogo area: an elite district each block of which would picture a country or an epoch. They had been discussed the idea for a year and then rejected it. But ideas do not give up easily – this summer “SPeeCH” studio has offered their own solution for the alike concept, for the territory nearby and along Pyatnitskaya highway. In the project with the speaking name “Culture of Gardens”. Must notice, it is very much alive now, though its scale seems enormous after the autumn shake – in fact it makes a town, 20 thousand people will be accommodated on 67ha.

So, the speaking name. We will start with the second word “cultures”. The town is divided into blocks, according to the idea of the authors each reminds of a country, which are: Germany, Spain, Holland and France. This is a multicultural complex. One buys a place in the austere German block, and in the evenings strolls along emotional Spain, and vise versa. A small, limited in its ha Europe. That is the idea of developers known in private for about 5 or more years.

What is peculiar about the project by “SPeeCH”? Probably, that is a high degree of generalization. The goal – is to show differences between architectural images of various countries – first, is achieved not intensively, or so to say with “wide strokes”, and second, obviously, there is used characteristic motifs, familiar to anyone. What is more important – there is no cheating on the audience or no intentional copying. The authors are not indented to create an illusion of presence in England or in Holland, they find an image of each land.

Spanish block includes 12- and 6storey towers with stripes of balconies and insertions of colored panels. Clear horizontal lines of solid deepened balconies makes many associations. Take for instance the area between Calle de Costa Rica Street and Alberto Alcocer Avenue, or Campo Volantin in Bilbao with colored of the hotel in front of the Guggenheim Museum.
In the Dutch block the architects placed simple 7storey volumes faced with brick of a warm brown-red (true color of the brick) shade. This makes it similar to all small towns together and different from any of them. The German area got a characteristic combine of glass and polished pale-yellow stone.

Allow me to observe, everything is done within modernist model, by texture, colour and shape. Bauhaus guru would probably be pleased to see “authenticity without copying" in a room.

The word "gardens” in the name of the residential complex is not accidental and might be more important. It is responsible for both the general and the particular, for difference and integrity of the small town. Through all the details the complex on Pyatnitskoe highway is a garden. First, the architects have turned it into a really green town: on one of the two main axes there will be a park with a waterfall in the end where boating will be available in summer, and skiing in winter. Besides, each block will be planted with particular type of tree. There even might appear small private gardens on the ground floors. This is how the architects have developed the popular today idea of dwelling in the nature with regular urban conveniences. In this way the separate town-garden is a less expensive variant of a private house in an elite settlement.

Also the complex is integral due to common planning principles. It is more or less strict. The two main axes cross under a right angle: the mentioned earlier "park" one, with a pond and free layout. There is a school, a nursery school and a sports facility. The second axes suggests a parade town promenade, a small garden framed with shop and offices. Its architecture could be figuratively named “Moscow-wise” because there are gathered most recognizable features of projects by “SPeeCH” in the capital - stripes stone boards-jalousie, very much art-deco vertical lines…”Byzantine house” and “Marine”, office building on Leninsky avenue come to mind. This part of the project took all the strictness and respectability of the residential complex.

“National” blocks stretch along the parade “town centre”, perpendicularly to the garden part. Houses are sited differently, but most of them fence off yards. The plan is more like “Stalin period” blocks in Moscow, so that is rather a classical approach to town planning than a modernist. The logic is clear – sited along the perimeter, buildings make comfortable space of inner yards, and outside form a kind of frontage line and neat streets.

In addition to the axial, stone and parade main street, there is another part of the development which hasn't gain any “national feature”. It is an island. The block is sited on a round island in the middle of the pond and includes small (3-4storey) colored houses placed closely along the outer round. Within there are rings of the small garden which are like a park labyrinth (French parks had such, mostly round, of flowers or bushes). But here one can’t get lost there, the height is small. In the “labyrinth” there will be planted trees of pyramid shape reminding of the South. To complete the scene there will be a round pond with a fountain in the centre – the axes of the joyful block. Venice? But there are no direct analogies, and role of the island is different – it serves as a filter or a catalyst element. Images of various countries pressed together inevitably create much of garishness, much of diversity. The island takes all the extravagance and intensifies it – after its colorful whirl the rest might seem colder. At the same time the island is the major enjoyable spot of the park complex – it is a pole opposite to strictness of the main street.

Noteworthy, Sergey Tchoban again appeals to international theme and idea of combining various architecture within a single place. In summer of 2008 at the architectural biennale in Moscow there was showcased a project of residential district Kudrovo nearby Saint Petersburg, designed by the studio together with “Evgeny Gerasimov and partners” architectural studio. The architects suggested the project of a town where blocks would remind arrangement of European cities, for example, Paris, Berlin, London.

Comparing the two projects, must notice, Kudrovo district is closer to the historical image of European capitals and “pictures” them precisely. And the complex on Pyatnitskaya highway is more generalized and modern. It is functional to the utmost, but its area is open and friendly, adapted for socializing. Distance from a block to block makes 30 meters, so one may reach by foot any community centre. Due to development of yards and squares, closeness of public zones, it doesn't have isolation that large residential volumes of high-rise housing have. The environment is not strange anymore, not only apartment area makes home but the yard, street and the entire town.

Many times architects tried to “peace” a man, town and nature. In Great Britain, around a century ago, the idea of there a garden-town started up – an alternative to cramped and stone town of early capitalism. A garden-town aimed to combine idyll of a countryside living and urban conveniences and comfort, the idea is still urgent nowadays and has a history. In the “Garden of cultures” there is a third element – culture. During the 20th century it became obvious - a man can't survive without it. The task is tougher now. Checks and balances are needed here. There has shaped a town vaguely resembling a palace park of the 17th century – in those times people knew that for balance living nature, house and something for mind were needed. They were building pavilions in different styles, Moresque, Gothic or rural. So the idea of “Gardens of cultures” is not new, but is a well forgotten thing, came from the history. And that is alright. 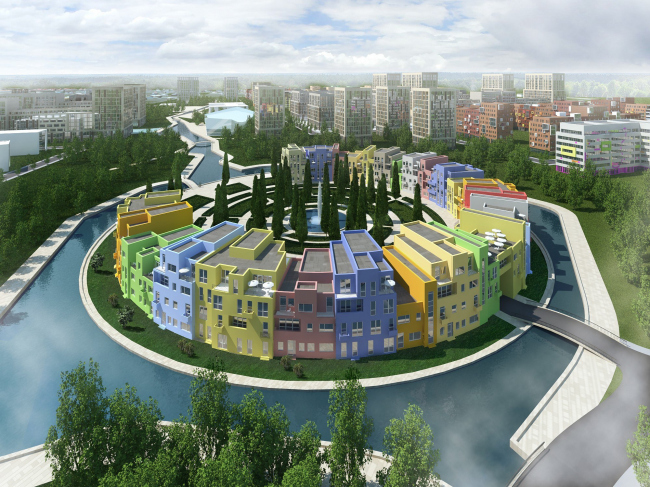 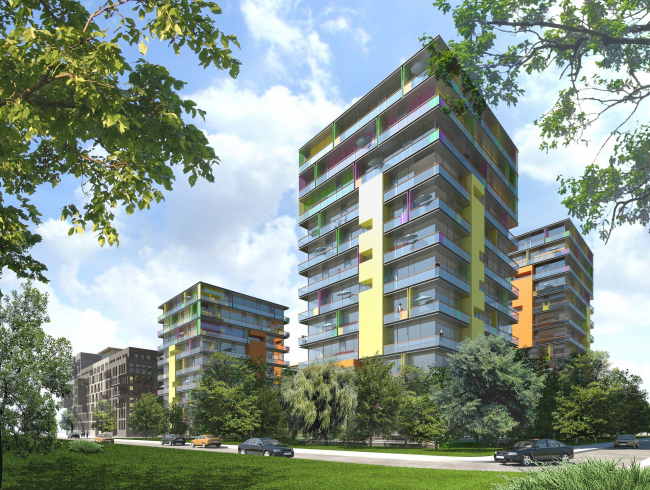 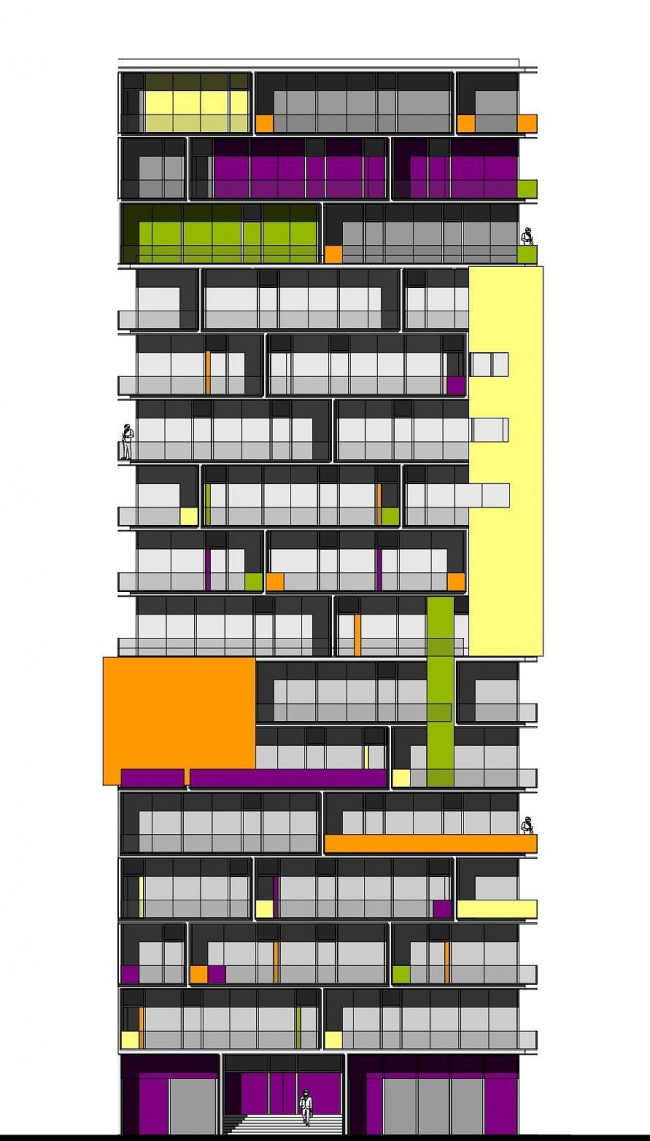 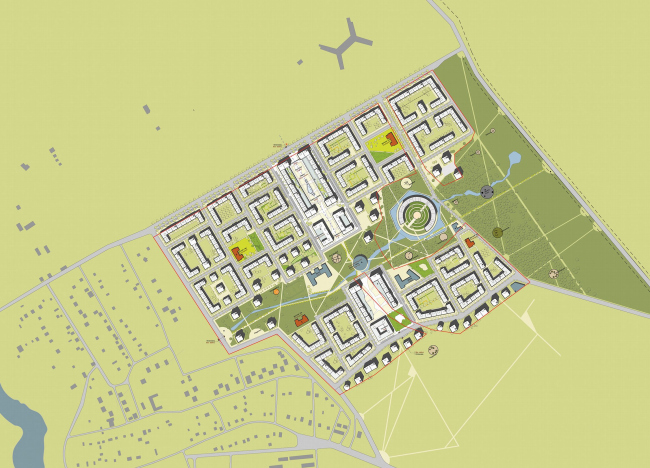 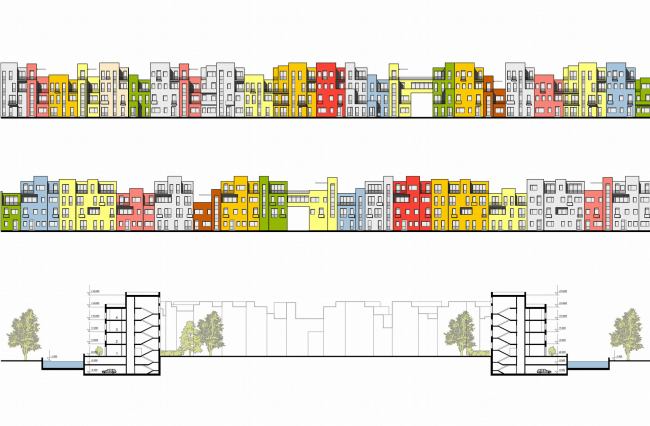 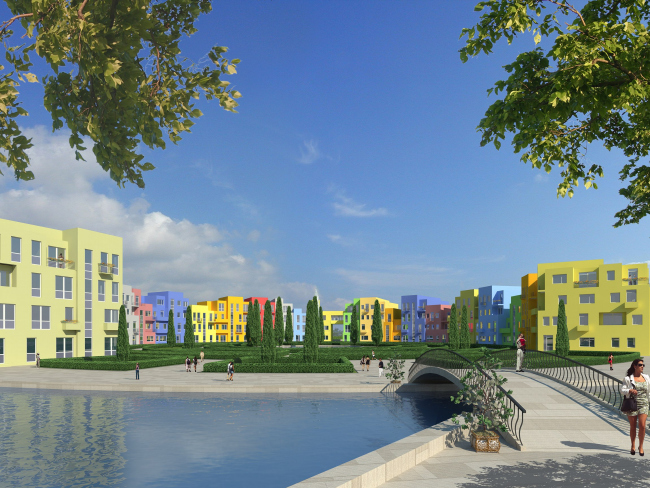