A high-rise symbol of the People's Friendship

Vissarionov’s bureau have designed a public and business centre in Ufa, which includes the two biomorphic towers and a “folded” basis, laid on the bank of Belaya river. It occupies a city block and creates a strong town-planning accent of this part of the city.

Over recent years ultra modern architecture of glass high-rise buildings have been actively fit into the context of provincial cities (Soviet, in parts). In Ufa city government, obviously before the crisis, planned to build a giant mixed-use complex similar to a flying island from the future, which have landed on the bank of Belaya river and wedged into dull development, mostly “stuck” in 1980-1990s. Named “Towers of commonwealth” in the honor of Russia and Bashkiria people’s friendship is developed by PAM Vissarionova.

Remarkably, it shapes an uncommon image for Ufa, popular abroad, but new even for Moscow. Inside the business city block there are multileveled paths, artificial nature and plenty of recreation zones. Staying inside the building, people will stroll along the streets of oasis, “microclimate” of which will be under control round the year. The project includes a considerable part of the bank and will be improved.

The complex grows on a kind of “island” created by the tree streets: Frunze, Oktyabrskoy revolution and Salavata Ulaeva highway. There are no dominant in the development of the bank line, except the Stella monument for 400th anniversary of the since Bashkortostan joined Russia. The embankment does not have a clear image being the most important part of the city, the view opening for those driving from the airport. Everywhere is panel buildings development, valuable only old industrial small houses along Oktyabrskoi revolutsii street, in the eastern part of the site, they will be reconstructed and renewed. The complex will become the dominant. Due to its complex outline, it breaks common horizon line and takes all the composition being a kind of sign of the modern status and new in the city grown on one of the main arterial roads.

Complex grows on the bank like a huge bio body. Its lower layers curve, following the bank line and make folds like plates of a geological formations. It is firmly put into relief, took roots and settled. The natural low spot is the bed of a subway which like a tree root ploughs the ground and comes out at the bank like out of a hole. The street is an axel of the master plan, from one end it leads to the historical centre, from the other it makes way to the embankment. Its multilevel space slowly goes down to the river by escalators, travelators, appearing here and there at different levels of the stylobate, full of various recreation and business functions. There is another passageway so the old development along Oktyabrskaya revolution street became valuable.

The two 36storey towers are growing out of concrete waves of the stylobate. They are like sand clocks with liquid mercury inside with reflecting “flowings” in the centre. Outside the volumes are encircled with metal net-web, and resembles a spring, they look like they are alive and can move.

Complex has various functions. There are two stages of construction. The first includes the south-east tower with a hotel, apartments and a restaurant, and the “wing” of the stylobate, where in the upper and middle levels there is a fitness centre, conference centre, a swimming pool and a shopping passage. Around the curved shapes of the”stylobate” extends a volume of conference-hall, a little high over the main level. It consists of the two “halves”, space between them is filled with glass. Volumes are complex, and such is their planning: in the oval hall there is a stage and from the two sides the audience seats grow like amphitheatre. In the glass ends of the volume there are view platforms.

Idea seems to be grand – an enclave of rich offices, shops, recreations, inner streets with lawns on the roof-terraces reflected in the glass of facades. Such mega-complexes bring a new scale and another idea of spaces. Well, must admit, even thought it is gigantic it looks quite naturally. There is seen the shape of another high-rise building, so if the crisis won’t stop all the constructing activities, in a while glass modernism will shift small private house, panel boxes and fancy 1990s which prevail in the development of the embankment in Ufa. 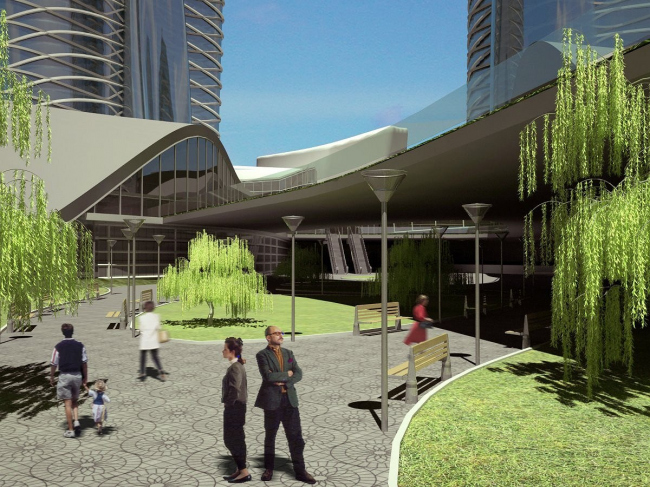 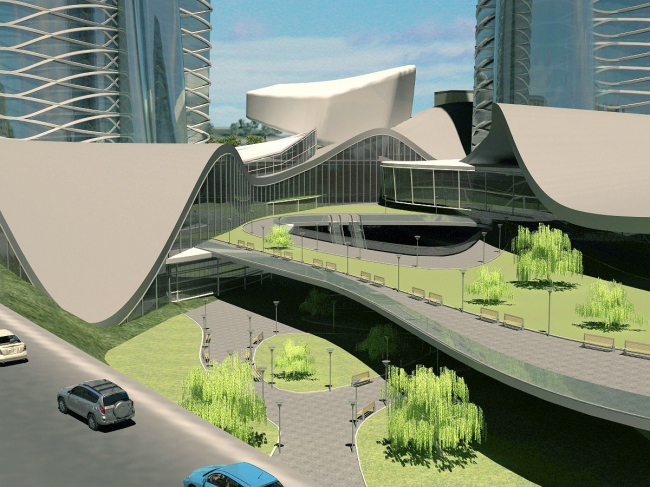 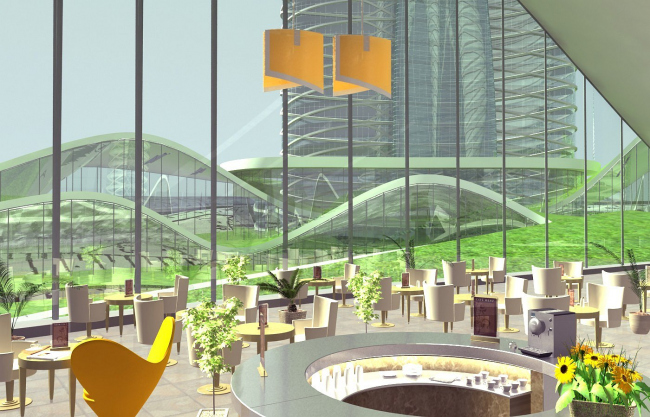 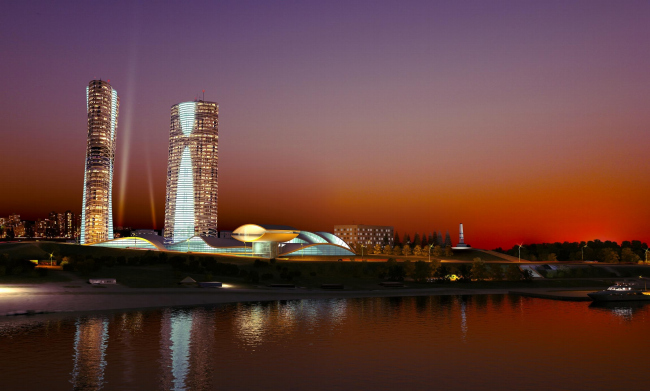 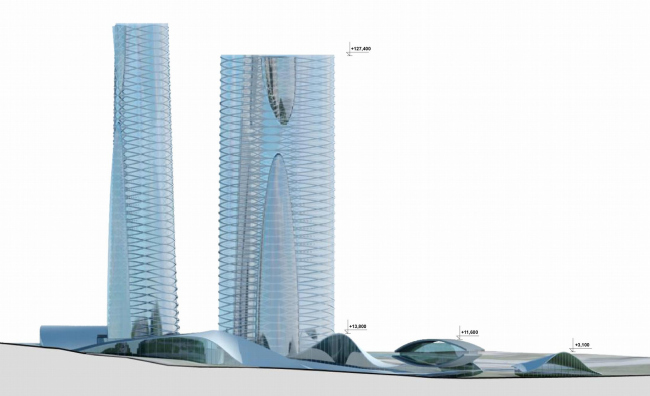 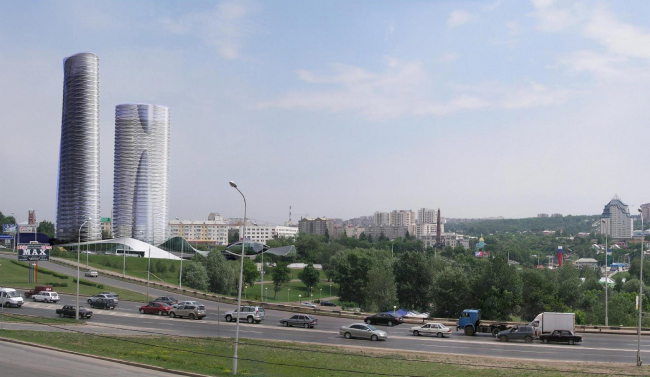 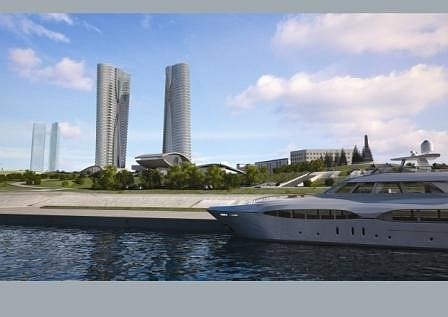 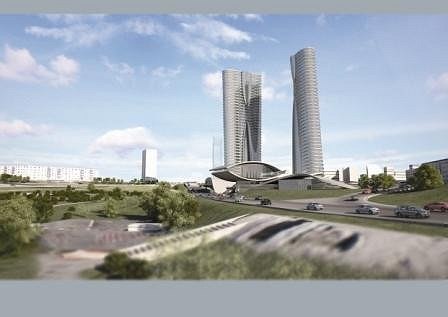 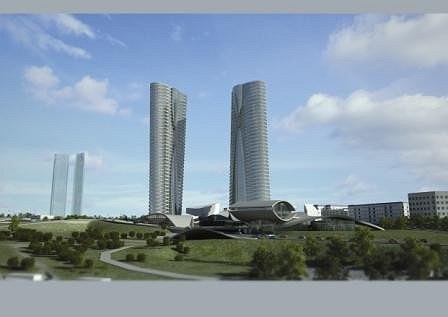 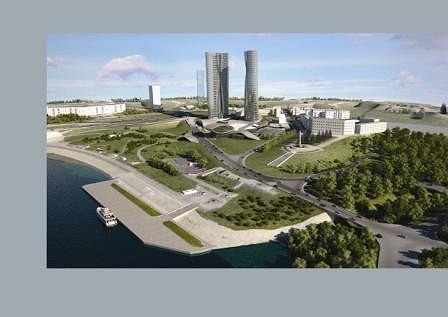 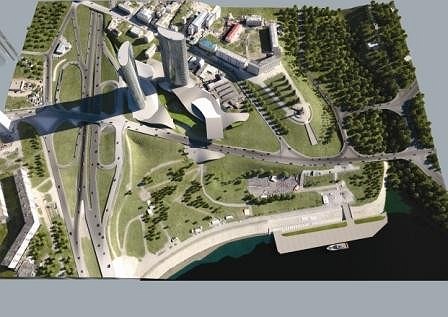