The new successful techniques developed by A.Len for designing a kindergarten under budget constraints: the mosaic of irregular windows and working with color.

The housing project “Obraztsovy Kvartal” (“Exemplary Quarter”), on the territory of which the kindergarten is built, is situated next to the Expoforum exhibition complex on the Pulkovo Heights and refers to the project of integrated land development named “Na Tsarskoselskikh Kholmakh”. Currently, only the houses of the first stage have been put into operation, and the area looks a little bit deserted, but there are no doubts that in the near future it will live a full life: the whole chunk of land south of the Pulkovo Mount and the observatory standing on it have long since been cleared for extensive low-rise housing complexes to be built by various developers, and the city government is even debating the prospect of building a dedicated railroad line in this area. The congress and exhibition complex Expoforum on the Peterburg Highway

The Pulkovo Heights are the place with a potential of a perfect suburb to live in. The Ring Road and the Northwest High-Speed Diameter make it possible to quickly get to any location in the city; nearby are the airport and the new highway to Moscow, and, to make things still better, the place is surrounded by the numerous parks and palaces of Pushkin and Pavlovsk. Therefore, this location provides easy access to both natural and country comforts, multiplied by the concentrated St. Petersburg identity issuing from the historical heritage sites.

What is currently being built here is architecture, although low-rise, still of the rank-and-file type, telling nothing about the spirit of this place. On the other hand, what makes it different from other newly-constructed projects is the rational infrastructure. Parallel to the housing stock, the developer is building the office and sports clusters, two schools, and one kindergarten (already put into operation), designed and author-supervised by A.Len.

Kindergarten #47 of the Pushkinsky District of St. Petersburg

The developer granted the architects complete creative freedom, but within the framework of a very limited budget – after its completion, the kindergarten was to be transferred to the balance of the city. Another obvious difficulty was the rigorous construction norms, the compliance with which leaves still less room for the abovementioned creative freedom. However, A.Len still were able to come up with a memorable image that matches the architectural context and can be realized within the limits of the stipulated budget. Kindergarten #47 of the Pushkinsky District of St. Petersburg

The kindergarten is designed for 140 children aged from one and a half to seven years old. The building is traditionally situated in the middle of the city block, surrounded by five-story houses. The part that stands out includes the common-use zones, such as a small swimming pool, a music, and a sports rooms, while the long part includes children’s bedrooms, dining rooms, and game rooms. The blocks of the classrooms are easily readable thanks to the bright inserts on the façade. For easier navigation, the architects proposed to run colored paths leading to each of the classrooms, but this idea was never implemented. The main peculiar feature of the building is the irregular window grid. Such solution is rarely seen in social infrastructure projects, in which facades are generally conditioned by the layout of the premises, which, in turn, is rigorously regulated by the construction norms. However, having found the governing idea, the architects, by using special software for calculating the insolation norms and the coefficient of natural lighting, kept “playing around” with the windows and expanding them until they finally reached the optimum configuration. The simple rectangular volumes immediately took on the right “resonance”, bringing up a lot of associations, some of them being close to children – like “holes” in chees, and to adults alike – the scatter of differently-sized windows puts one in the mind of Notre Dame du Haut. Thus, the architecture which is understandable to children, unobtrusively exposes them to the classic techniques of Art Nouveau.

The manager of the kindergarten, Angelika Mayorova, shares that the design was a hit with both children and the kindergarten staff: there is plenty of light, and the original configuration and safe construction allow the teachers and nannies to use the windows in seasonal decoration of the classrooms and include them in game scenarios. 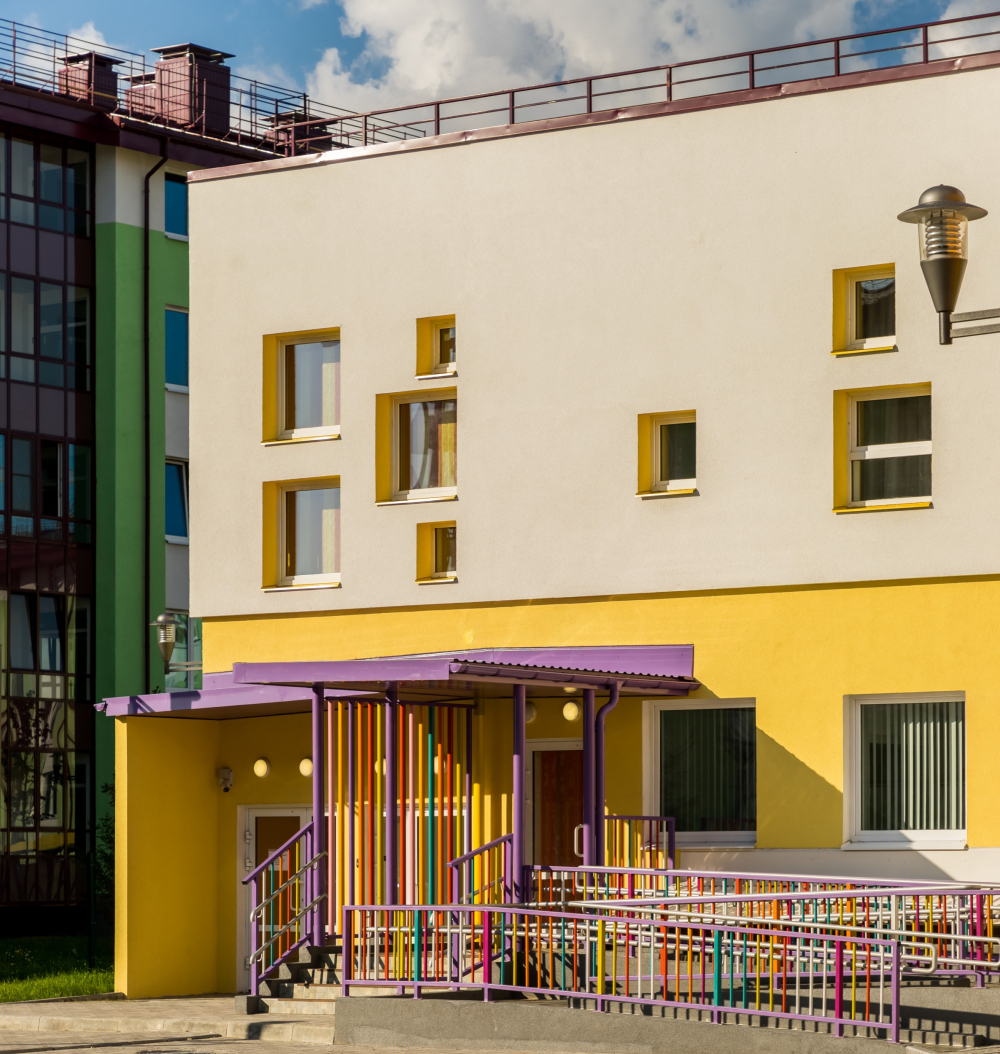 Another important technique is the color. In the early versions of the sketches, A.Len proposed an even richer color texture – with highlights as bright strips instead of monochrome color spots. The echoes of this solution remained in the multicolored fences of the entrance groups. Then appeared the “bulging” TV-windows with contrastive frames. However, in the final version, laconic in the vein of Mondrian style, nothing distracts us from the beautiful dance of big and little windows. It is interesting to fantasize how the kids choose the view and the window to their liking – you can look out of these windows while standing up, sitting down, or maybe even lying down, pretending to be spies or pirates on the vantage point aboard a pirate ship. The multicolored facades with asymmetric windows, in addition to raising the people’s spirits, take on a few more pragmatic functions: children and adults can easily identify their classroom, an image corresponding to the preschool institution is formed, and the composition and proportions, imprinted in the subconscious, bring up a taste for architecture in children. Against the background of the rank-and-file houses with their even rows of windows, the kindergarten looks like a contrast between the adult and children’s worlds: life regulated by social norms is so far against straightforward and sincere emotional manifestations. 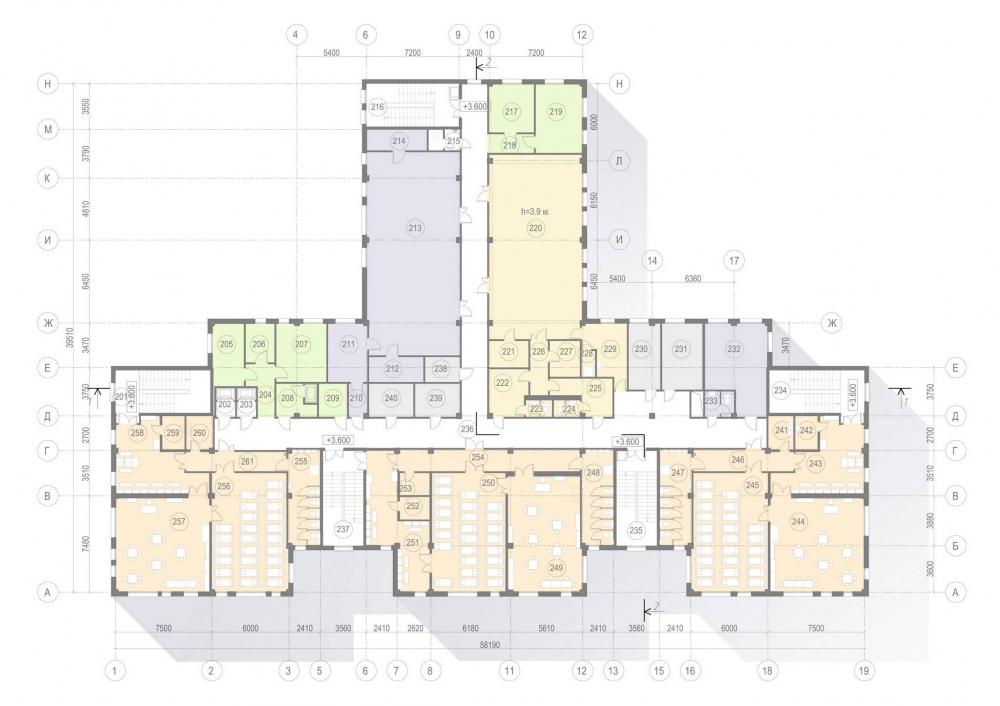