In a small-sized school located in Domodedovo in Moscow metropolitan area, ASADOV_ architects did a skillful job of tackling the constraints presented by the modest budget and strict spatial limitations – they designed sunlit classrooms, comfortable lounges, and even a multi-height atrium with an amphitheater, which became the center of school life.

For several years already, the Moscow metropolitan area has been realizing the state-sponsored program of school construction – according to the region’s authorities, the nation’s biggest project of such kind. Annually, regional publications report about tens of school buildings being put into operation, which is, of course, good news because we see the late shift in schools gradually becoming history. Domodedovo became no exception – the town’s oldest educational institution, Lyceum #3, named after the Hero of the Soviet Union Yuri Maksimov, got a new building last year, thanks to which its students will no longer have to study in the late shift. At the same time, however, the Domodedovo school is not “just another school” in the state-sponsored program. It has been built not by some obscure architectural office, but by a project developed by an architectural company with a name: the task of designing a relatively small school for 275 students, at the invitation of the general contractor, Academproject, was commissioned to the ASADOV_ architects (the architectural company and the contractor has long since been engaged in partnership and friendly relationship). When they already got down to work, the architects found out that it was about designing a school building that could be duplicated in other towns of Moscow metropolitan area – essentially, they were required to design a “model” school. According to the company leader, Andrey Asadov, the client at the same time posed a task of designing all of the school spaces as efficiently as possible, i.e. make their area minimal – “not a single extra square meter”. It was a government contract, and this means that for the construction of the school, including the equipment, utility lines, and the landscaping, a fixed sum is allotted from the budget – 1.2 million per student, which is sometimes augmented by the donations for the municipal budget (totally, the new school building cost 524.6 million rubles, 364.6 million rubles coming from the regional budget). Not too much, by any standards. The design work was done in close cooperation with the Main Department for Architecture of the Moscow Region and the Ministry of Construction, who closely monitored the process, meaning – did a thorough job of making sure that the architects did not break away from the “minimizing the area” strategy. The small 1.47-hectare land site of a square shape hosted not only the three-story school building but also the athletic ground and some walking space – one can judge how compact the project is by the sole fact that the fire truck lanes partially coincide with the tracks of the stadium. The project was “streamlined” and “optimized” at every stage, but, thanks to the creative will of the architects, they were ultimately able to realize an unconventional architectural idea even without the necessity to get the approval for the project-specific technical conditions, which is usually required when the project spills over the traditional limits.

Three petals and the atrium

The building with an area of more than 7500 square meters got quite an unusual plan – three units run away from the nucleus like three petals. From the side of the Sovietskaya Street, along the bent part of the building, next to the main entrance, there is a cozy and compact plaza where the school assemblies take place, the backyard containing the sports zones. Such a volumetric composition is conditioned, first of all, by the insolation requirements. The classrooms are oriented southeast, and what classrooms are oriented west, do not have mandatory insolation requirements. There is a total of 28 classrooms in the building. With the design capacity of 275 students, in actuality, 624 students are studying here – thus, all of the classrooms are engaged, and none of them stands idle. 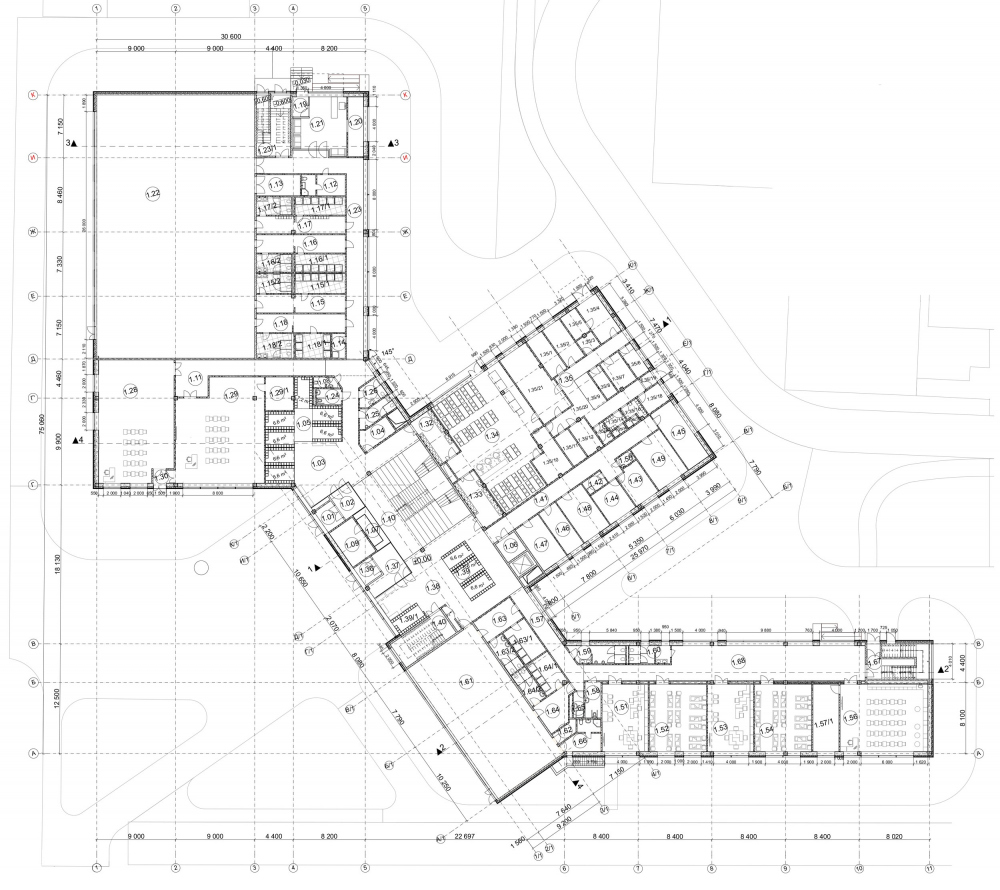 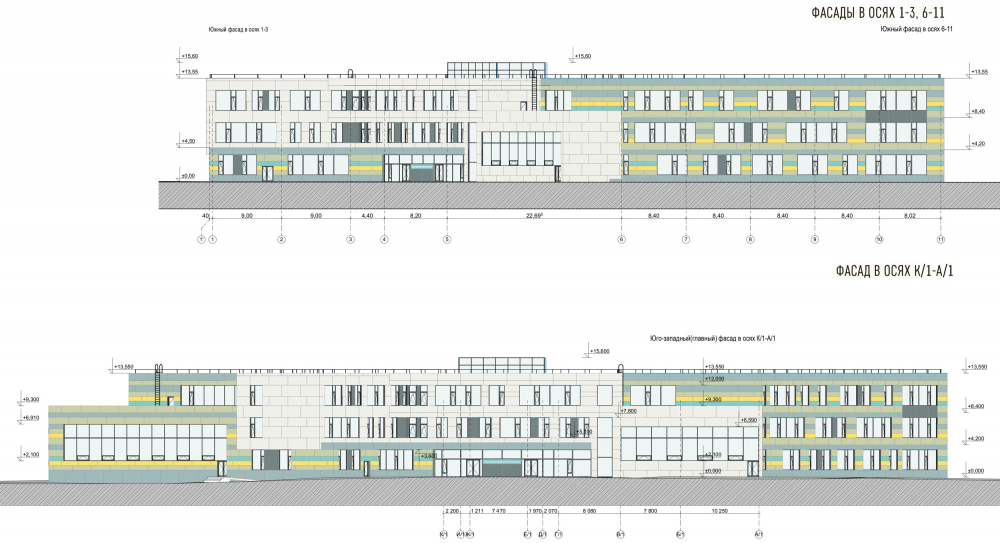 The main feature of the project, which the architects were able to implement in spite of all the optimizations, is the 96-square-meter atrium, three stories high and with an amphitheater, hosted in the entrance zone. Quite predictably, it became the most popular and the busiest place in the whole school; this is a favorite hangout of the high-school students. The atrium also performs the function of a symbolic space, quite important for the Lyceum as an educational institution: on a wall about 9 meters high, the school administration placed a panel picture displaying words that express the values of the Lyceum – in the course of the school project they were chosen by the teachers and the students. According to the principal of the school, Natalia Kiseleva, traditional group photo sets take place on the stairs of the amphitheater. Andrey Asadov takes great pride in the fact that in addition to the standard set of school premises, the architects “were able to organize a small element of public space that obviously works great.” The fire safety requirements, namely those of isolating parts of the building in case of fire, were observed thanks to using fireproof curtains hidden in boxes installed along the perimeter of the atrium. When the fire alarm goes off, these metallic curtains, like roller blinds, automatically fall down, turning the atrium into a separate zone, which prevents the fire and smoke from spreading.

The corridors that connect the classrooms are compact and L-shaped, “bending” from the central unit. Thanks to the human-proportional scale of the building and the natural light either along the entire length of the corridor, or coming from both ends, the lounges looks like spacious, yet still human-friendly spaces. You will not lose yourself here, the way you would in the endless “gut” corridors of a typical Soviet school. The walls that separate lounges from classrooms have small window apertures in them that create an impression that the wall is transparent – sadly, they are fewer than the architects initially designed: the water risers hidden in the walls got in the way.

The largest “petal” contains a 540-square-meter universal gym with a ceiling two stories high. The same unit contains audiences, separated from the gym by a corridor, which could have been dull and dark, had it not been for a curious hack that the architects used. Near the far wall of the gym, there is a skylight in the coffered ceiling, with more windows in the corridor wall. Thus, the lounge becomes a light and interesting place to be: one can peek inside and watch the students do sports. “Our project totally meets all the construction rules and regulations, yet the feeling of space is quite different here” – Andrey Asadov proudly shares. There is yet another gym, with an area of 200 square meters, situated in another wing. The list of other interesting spaces includes the hybrid library – a sunlit spacious room with liberal gazing and an exit to the terrace (truth be told, we visited the place in November, and the exit to the terrace was closed. Hopefully, it will be opened in warmer seasons).

The school is situated in a mixed-construction neighborhood, which is pretty far from the town center – nearby, there are small private houses, then there are public buildings, and 14-stories residential projects. Against the background of the other public buildings of Domodedovo, the school sports an advantageously modern and laconic look. The building looks surprisingly sturdy, and this is something that meets the eye. Calm, dignified, and positive – these three words can best describe the visual appearance of the new school building. Here, for obvious reasons (the budget, not to put too fine a point on it), the architects could not use any expensive building materials. The facade decoration was also prompted by the construction regulations – in the Moscow region, for facade decoration, low combustible materials are allowed (unlike in Moscow itself, where the facade decoration materials must be totally fireproof, period). Eventually, the architects settled for aluminum cassettes – aluminum is in fact classified as low combustible – and it is really a great thing that the wall are not garish (ostensibly “children’s”) colors, but moderate tones: salad green, cerulean, yellow, gray, and white. The curtailed budget did not allow the architects either to do detailed design interiors, or to conduct full-fledged designer supervision. They only came up with general guidelines on colors and decoration materials. The interior design of the school building, which, it must be said, was executed on a totally decent level, could have still been a little more refined, had the architects supervised the project to the very end. To name but one example: the staircase railings in the atrium, made from stainless steel, look pretty straightforward, which came as an unpleasant surprise to Andrey Asadov. “Circular and glittering are the two parameters that make all of the designer’s efforts null and void” – he laments.

The case of Domodedovo school again goes to show that our state is not ready to go that extra mile and spend extra money on school construction and reconstruction, and, quoting the architect Sergey Skuratov, who once made a statement on the topic of schools, “buildings with interesting thought-out architecture grow like sprouts through cracks in the concrete, and each such building has a heroic history behind it.” The heroic nature of the Domodedovo school, which is no exaggeration, was highly appreciated by the professional community. At the international competition of architectural projects in the sphere of education BuildSchool 2019, the school, designed by ASADOV_, took the bronze award in the category “Best new construction project”. In January this year, it was announced that this project, as was originally intended, will be used again at least once – it was approved for implementation in the settlement of Troparevo near Mozhaisk. This sure is good news: one more flower blasting the concrete.