Twenty years ago, the answer could well have been: everything. Everything in the country was of great interest – only not architecture. As well as having a talent for singing, drawing, and writing poetry, our architects also produced large numbers of conceptual projects. As for real buildings, most were the exact opposite of Betsky’s slogan: they were ‘buildings beyond architecture’.

What, however, has remained in this architecture apart from buildings? If we compare today with the Soviet age, we see that conceptual design is no longer present in Russia. Likewise gone is the taste for architectural theory. Ecological urban design, the new sociality, the architecture of the age of virtual reality, and even art architecture have little relevance for the Russian architectural context of the 1990s and 2000s. We are aware of these ideals, but we don’t get excited about them, because they are of no practical interest. We build buildings, leaving the intellectual speculation to those who, alas, have no such construction boom.

Prosperity cannot but please. But the question posed by Betsky, ‘What do you have beyond buildings?’, must make us worry that there’s something we’re lacking. It’s probably to stimulate this feeling that events such as the biennale exist.

Can it really be true that we no longer have any concepts? Where now are the ideas in our architecture?

‘Buildings replace the soil, and this is architecture’s original sin. Buildings give rise to something new, but this does not happen in a vacuum. That which was once vacant earth, full of sun and air and limited only by the horizon, becomes a building. That which has artificially been created by man squeezes out that which was born by nature. The building’s shape blocks the air, the sun, and the views round about. The memory of the existence of the original site is eroded…,’ writes Aaron Betsky in the introduction to his  book Architecture beyond Building. Betsky is talking about the intricate phantoms of a landscape where nothing has yet been built but the site itself is full of meanings and images that are tragic and contradictory. These image-meanings precede architecture; they are difficult to capture. At the 11th architecture biennale we present a unique master of Russian land art, Nikolay Polissky. Polisssky’s striking revolution in Russian art involves a hybrid of conceptualism and folk craft. His absurdist performers are simple peasants, the inhabitants of the village of Nikola-Lenivets. Thus he combines the conservatism that is traditional for part of the Russian intelligentsia (the retreat to the country village, to nature, away from the temptations of the city) with the logic of the Avantgarde performance and conceptualism.

It is important that all this takes place on the basis of an architectural utopia. A ziggurat made from hay, an Eiffel Tower made from osiers, a Roman castle made from firewood: this is the building up of village life to the fullness of universal Existence; and this is precisely how the cosmos of the village of Nikola-Lenivets is designed. The surrounding landscape seems to be fullof unembodied dreams, which hover over the meadow by the river,on the little hill, and in the ravine or the fields. The Russian utopian consciousness is today temporarily living beyond architecture: it has set off for the countryside and taken up residence in the landscape.

Partly, these are precisely the thoughts/images which precede architecture and of which Betsky speaks. But for Betsky architecture is born through the sin of violence committed on the landscape. In the case of Polissky’s installations and performances, what we have is objects that are naively sinless. These are the landscape’s dreams of being built upon. Such a utopian consciousness is probably appropriate for a country undergoing a construction boom.

Who is embodying these dreams? This is the ninth time that Russia has taken part in the architecture biennale in Venice. The Russian pavilion has always shown conceptual architecture. We were always too embarrassed to show what was actually being built, and while we were busy being embarrassed, the country was experiencing a construction boom. The time has now come to show real Russian architecture. But this is not just an exhibition of the leading Russian architects of the last 15 years. It is an attempt to diagnose what is happening. What is the defining feature of Russian architecture today? Five years ago, Western architecture was a source of ideas for us – an unattainable ideal, you might say. Today all the big names in world architecture are here in Russia. They win architecture competitions in Moscow, St Petersburg, and Sochi, and receive the most important commissions to design buildings. For Russians yesterday’s idols have become today’s main rivals. We have caught Russian architecture at a turning point. Who will win in this competition is as yet unclear. But the situation is interesting in itself. Never yet have Russian and foreign architects come to blows over ‘how to build Russia’. Each of the ‘stars’ – Russian and foreign – is represented by a model. The models are arranged on a chessboard. The main display in the Russian Pavilion is a game of chess between Russian and foreign star architects over the utopias of Nikolay Polissky. The clock is already ticking… 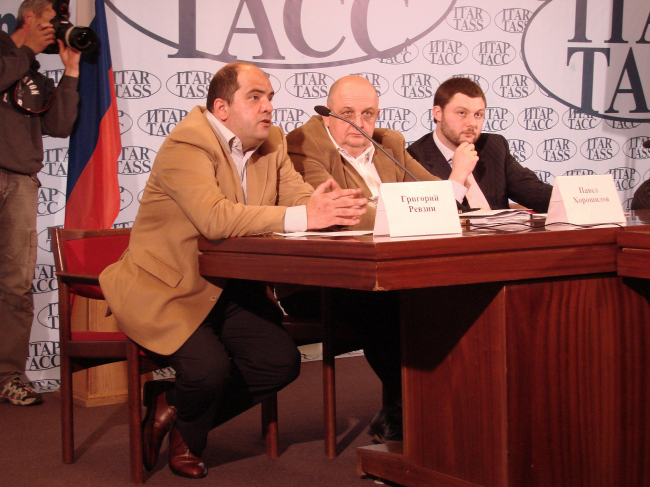