The housing city block within an IT park: Archimatika is combining innovative technologies with a human-friendly scale, and a cozy environment.

The innovation park Unit.City – the first such project in Kiev – is being built on the territory of the former automotive factory, a 20 minutes’ drive away from the city center. This place is meant to become something like an ecosystem, in which the community of fellow colleagues works and lives, aided by special infrastructure. One venue unites companies that specialize, for example, in augmented reality, or in cyber safety, or in eco technologies, and these companies have at their disposal various schools and accelerators, laboratories, and conference halls, where you can organize professional events on a regular basis.

The master plan for Unit.City was prepared by the Polish company APA: the cluster is divided into zones called “business”, “innovation”, “education”, and “life”, which allows people to work and get involved in recreational activities without having to leave its confines. Currently, an IT school and three office buildings have been built, with 108 residents already working in them. More than half of them have already launched joint projects – the system has proven its feasibility.

By 2025, nearly half of the territory will be occupied by the residential blocks of Unit.Home complex: these are designed by Archimatika, a company that is very close in spirit to this location – parametric design, focus on energy supplies, and synergy are all part of everyday working process for it. For the housing sector, the same principles were applied as for the entire innovation park, yet the task was made slightly more complex by a seemingly different criterion: the housing had to be cozy above all. Unit.Home consists of seven city blocks and two separately standing buildings. Their height is quite human-friendly, only six-eight floors, yet each of the blocks has a landmark tower of its own, 20-22 “serious” stories high. For solving the “cozy vs innovative” task, after considering about fifteen options, the architects stopped on a technique that was dramatic in its plastique: each room – and, in the case of Archimatika, no two rooms are exactly alike – is an individual unit, which can be easily read on the facade thanks to the projections and cavities of different size.

The irregular structure will also be emphasized by the light-colored decoration and panoramic windows reaching to the ceiling with slim dark imposts – everything you need, nothing you don’t – while extra brightness will be provided by abundant greenery on the balconies and terraces. This image, found by the architects, best conveys the vibes of the place: you see here a geometric pattern, some rebelliousness, individuality, and being open to the world, all rolled into one. Just as other Archimatika projects, Unit.Home will not have any standardized solutions in it: the height of the rooms may vary even within one apartment. The focus on the daytime or the nighttime zone, a large kitchen or a large bedroom – the future resident will be able to make his own choice of what better fits his lifestyle. Totally, UNIT.Home will have around 2500 apartments in it. 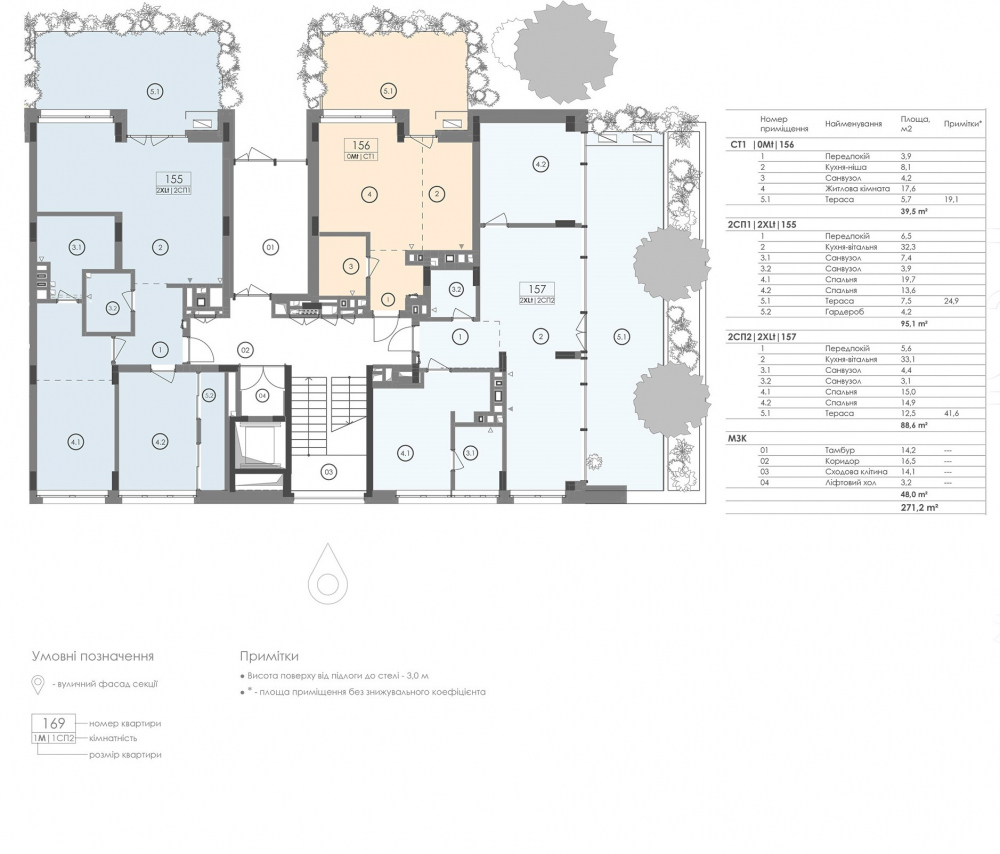 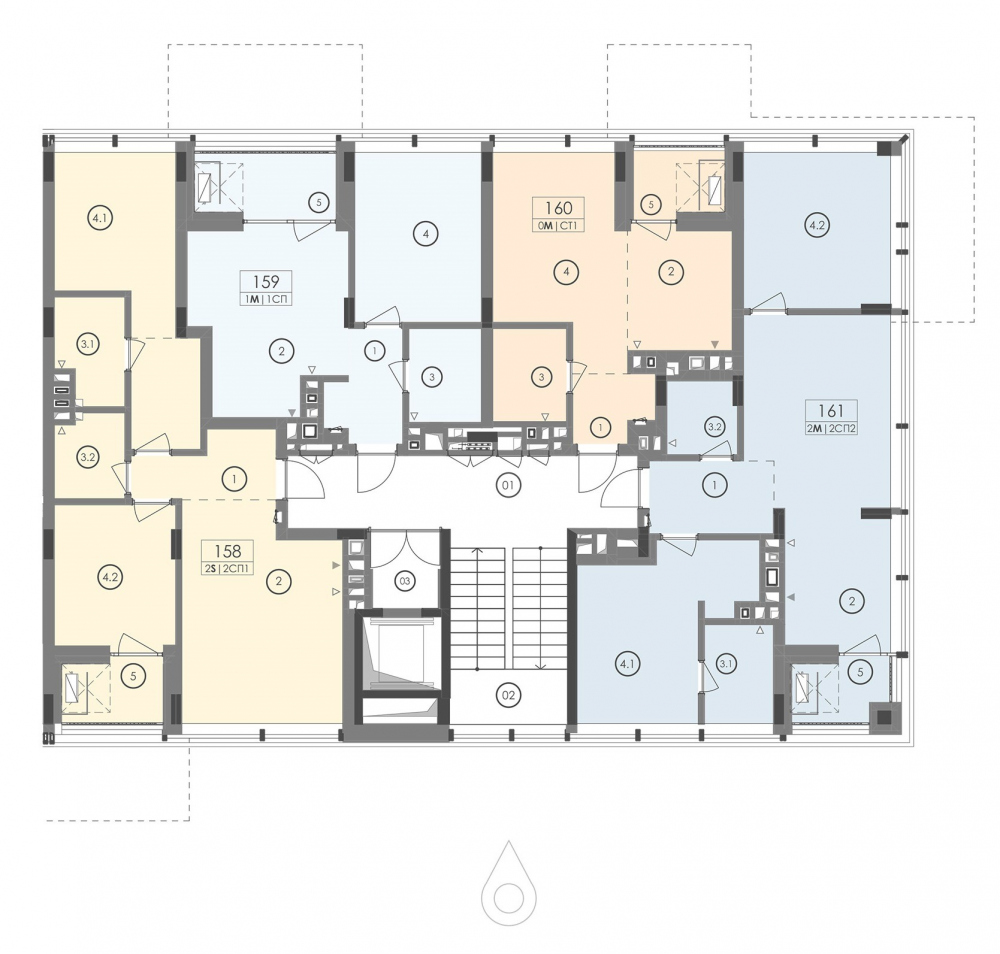 The first floors of the buildings are given to commercial premises that are meant to save the residents’ time: they will not have to leave their block in order to have a bite to eat, go see a doctor, have their children taken care of, or simply have a rest. In addition to the generally expected infrastructure set, there is also a skate park here, a digital library, an art gallery, barbecue zones, an amphitheater, and a hotel. The environment is barrier-free, and is adapted to the needs of people of limited mobility – for example, the architects made sure that all the buttons are conveniently placed, and corridors and ramps are widened. The parking places are hidden underground, each tenth being equipped with an electric car charger; there are also electrical outlets for bikes. 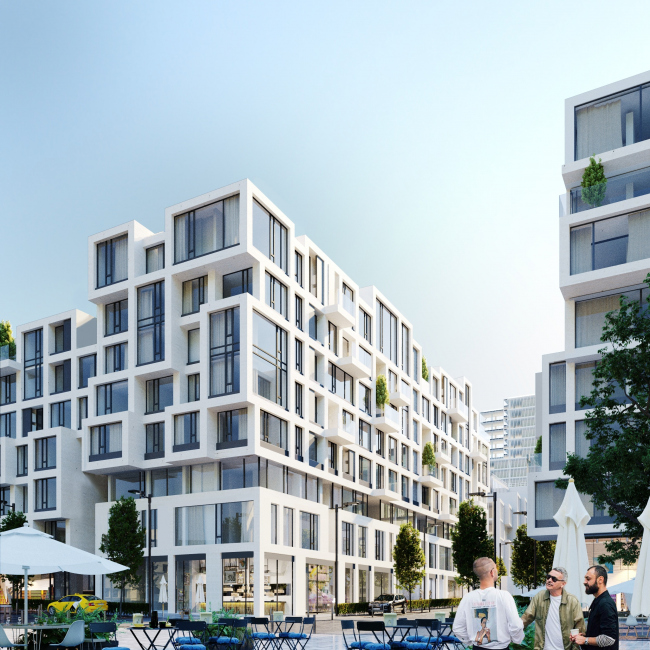 The houses are designed in such a way as to meet the BREEAM environmental criteria; Unit.Home will become Ukraine’s first housing complex with such “green” status – claims the founder of KAN Development Igor Nikonov. The set of technologies applied for that purpose puts one in an optimistic mood.

The SMART Lightening system adapts the lights to the time of the day and weather conditions. The greenery on the terraces is not just a beautiful concept: the sprinkling and drainage systems are installed in the infrastructure of the buildings. BMS - the automated building management system – tracks down the breakdowns: if somewhere a pipe is suddenly leaking, the water supply will be stopped, and this will eliminate the risk of overflowing. There is also the SMART Home monitoring system that shows to the tenants the expenditure of heat, water, and electricity through a smartphone application – one will be able to compare, for example, how much water he spends on a bath or on a shower, and draw his own conclusions. At the same time, the managing company also has an opportunity to quickly respond on the building’s nonstandard performance: if some place, for example, consumes too much energy, they send a droid to inspect the spot – well, just kidding, of course, but this idea does not nearly sound as sci-fi as it would have a few years ago. The smart technologies will help the residents save up to 25% on utility bills. The security system is yet another stunner. There will be no fences on the territory of the cluster, just innovative technologies: a face scanner, a license plate recognition system, and an aberrant behavior detection system, as well as patrol drones and emergency buttons. The high-speed internet will be protected from cyberattacks and the vagaries of nature.

Unit.Home looks like a utopia one feels like immediately being in: a beautiful green-and-white town, where people live and meet to invent new things, securely protected by friendly technologies. And the solid reputation of Archimatika leaves no doubt that this is how it is eventually going to be. And this new type of environment will perhaps foster a new type of human beings.
Text by:
Translated by Anton Mizonov