​Sergey Tchoban: “We place our bets on a polyphonic city”

Sergey Tchoban, the curator and the chairman of the jury of the Second Russian Biennale for Young Architects speaks about the rationale of the jury’s decisions, and about two scenarios of developing former industrial parks.

Archi.ru
Could you please compare the level of projects submitted for the first and second biennale?

Sergey Tchoban:
The level remained just as high. However, considering the fact that the task that was set for the finalists this year was more challenging, I think one could say that the overall performance of the contestants 2019 is even higher than it was during the first biennale. This year, we got not just interesting projects but a few fully-fledged strategies for developing two specific land sites.

If we are to think of derelict industrial parks as a hidden resource for the development of the Russian cities, can we name any models of developing these zones by the results of the biennale?

We singled out two such models. The first one is the framework master plan of the territory development that presupposes that various architects will be involved in this process as the industrial park is renovated. This is why these projects were predominantly focused not on the extraordinary architecture but rather on the revitalization strategy, its main phases, its main planning, and, let’s say, genre principles. The way I see it, such an approach is completely valid: industrial parks, as a rule, are vast chunks of land, and the city inevitably wins because one and the same project brings together architects with different creative visions and different artistic methods. Our first places in both nominations were scored by Alexander Alyaev in the “Santekhpribor” nomination and TO “Leto” in “Port Elevator” nomination – these are exactly such pragmatic scenarios of territory development presenting a clear strategy and making it possible to place your bets on the polyphony of architectural languages.

Alexander Alyaev. The project of revitalizing the territory of the former Santekhpribor factory in Kazan

And our second prize winners, the architectural companies KB11 and Megabudka, proposed a strategy of passive development – and this is the second model of revitalizing an industrial park. When I say “passive development” I mean that it is not the entire territory that gets transformed – for example, some of its parts turn into recreational facilities but this does not mean that they will stay that way forever. For example, in the case of the project that KB 11 proposed for the Santekhpribor factory, we raised a few questions about the fact that one park space appears in the immediate vicinity of another. However, we ultimately read it not as a “park forever” – and Philip Yuan made a very convincing presentation at the jury session in that subject – but as a passing phase for further development. 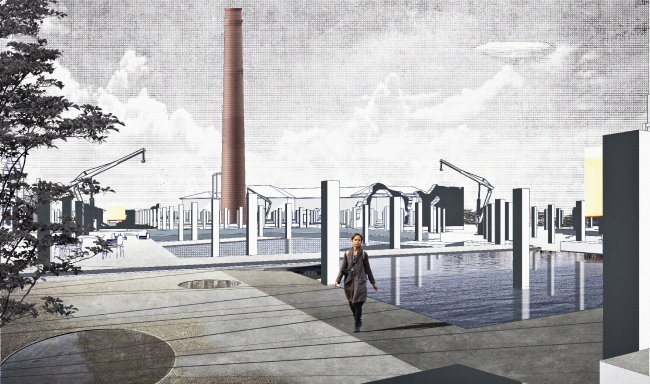 KB11. The project of revitalizing the territory of the former Santekhpribor factory in Kazan

A lot of people noticed the bright project submitted by Khvoya, yet it was only awarded a “special mention” from the jury. How would you comment on the decision to award the first prize to the “Santekhpribor” project?

In my opinion, the approach demonstrated by Khvoya did not quite meet the jury’s expectations connected to the contextual and resource-efficient philosophy of construction. Khvoya came up with a very poetic project, having a strong spiritual background and a prominent Piranesian mood. However, this approach to revitalizing industrial parks is rather one-sided. Our goal is not to make a monument of what is already there on the land site but breathe a new life into the old buildings. This approach, when everything that’s historical is by default kept as a beautiful ruin, with everything that’s new built outside of this ruin, does not quite meet, according to the opinion of the international judging panel, the principles of sustainable development. If you leave a ruin as a ruin, it starts requiring a lot of tender care, and becomes pretty high-maintenance, too. On the other hand, forming all the yards with just one module is a technique that is a sure sign of a one-time development scenario. The Khvoya project is very beautiful and unique, yet it is an author’s statement that is not quite feasible. 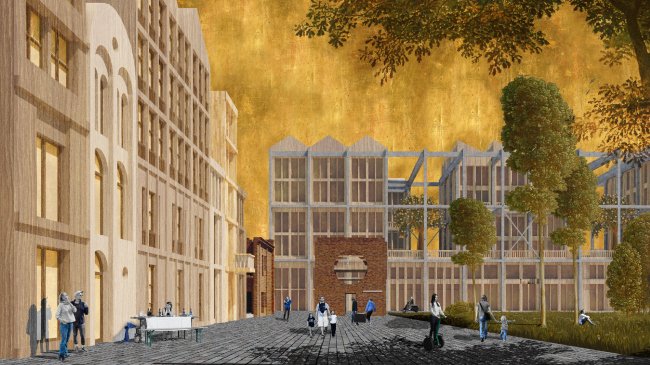 Khvoya. The project of revitalizing the territory of the former Santekhpribor factory in Kazan

As I already said, we were looking for flexible scenarios, which would make it possible to implement the revitalization strategy by degrees, changing, if necessary, the parameters of some individual elements, as well as their functional purposes. The project submitted by the winner, Alexander Alyaev, answered the set task in a more down-to-earth manner – perhaps, not so poetic but looking into the future. The way I see it, such architecture is the kind that has a future. Not a baroque monument replacing another monument, but healthy pragmatism with a taste bar raised high, and the perfect sense of measure. This is what our future is about – sparing treatment of our resources, and not creating a work of architecture for the sake of architecture.

What were the highlights, in the opinion of the jury, in the project submitted by “Leto” that scored gold in the nomination “Port Elevator”?

This was the only project in this nomination that thoroughly addressed the issue of the ratio between the scale of the elevator and its surroundings. An elevator is a powerful monumental thing, yet this doesn’t mean that it must be surrounded by a windswept field. It must be surrounded by an environment that is not trying to outshout the elevator but is creating interesting spaces all around it. What “Leto” essentially came up with was a low-rise European town with a beautiful potential for developing the outlying territory. In addition, they were able to convince us in the idea of creating a public space on top of the elevator. 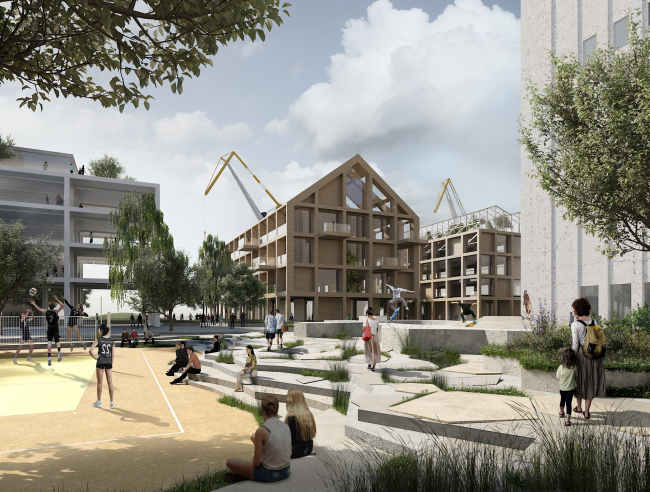 Leto Creative Union. The project of revitalizing the territory of the former Santekhpribor factory in Kazan 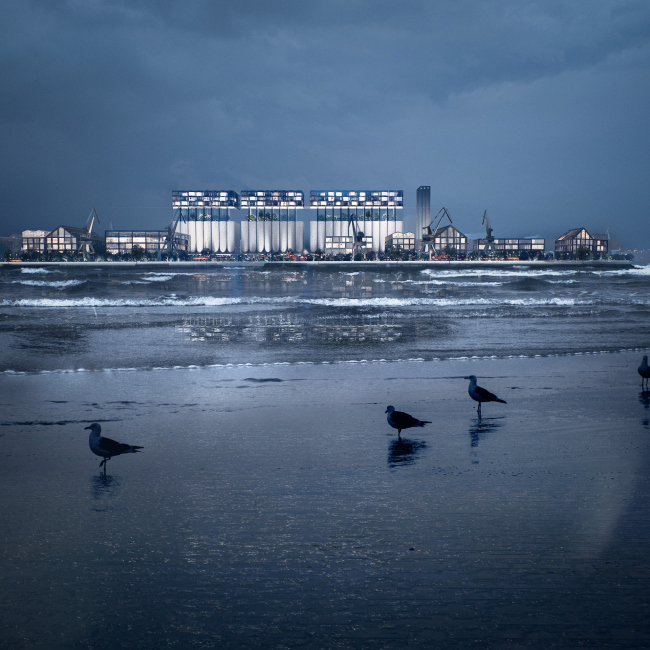 Leto Creative Union. The project of revitalizing the territory of the former Santekhpribor factory in Kazan

We even recommended our contestants to refrain from changing the elevator itself, only using its structure as a podium for the building that develops the public spaces still higher. In fact, this is the only one out of the 15 projects submitted in this nomination, in which the grain elevator did not change its appearance beyond recognition, but was used as a given, serving as the basis for creating something totally new. This was a town-planning scenario that convinced absolutely everyone.

Generally speaking, I must admit that the elevator was quite a serious challenge for the finalists. Somehow, 90% of the contestants understood the task precisely the other way around, i.e. that they wanted to change the elevator. But here is the thing – revitalization of this territory is not about doing something outstanding with this concrete colossus, but about creating a convincing scenario for developing the space around it, like a medieval city around the cathedral. I kept asking myself a question all the time: why didn’t anybody come to the idea not to do anything with the elevator? To leave the whole thing alone? To use it as a given monument, and not cut away these gigantic rings? Because cutting away is just as difficult as building from scratch. All these radical changes eventually led to constructing brand new buildings in the shape of the elevator. Triple effort and triple costs, which do not have anything to do with the principles of sustainable development.

What are the prospects for the development of industrial parks in Russia?

In my opinion, it is very important that investors and architects understand the possibilities and chances that such territories are giving to our cities. They have a historical memory, and it’s very important not to try to build on them simultaneously, but proceed from the context, paying attention to the signs of time that are there. We don’t have skills and resources to create, within a short period of time, an environment that would be just as complex and healthily controversial in order to keep us happy and at the same time intrigued for a long time in the future. This is why careful preservation of the historical legacy is a chance for us. I think that today even the investors realize that constructing simultaneously many look-alike “box” buildings in such territories (and these building do look like one another, even if they have different patterns, such examples are quite numerous in Moscow) is not a valid method. The valid method is about creating a contrasting environment that is respectful of all of the historical layers. And – I can’t stress this enough – this must be done gradually, using the languages of different architects. Then you will get a polyphonic city that has a future.