Curves of the Dunes

The apartment complex built in the city of Sestroretsk boasts curvilinear forms and highly developed infrastructure, which makes it possible to describe this place as a “health park” or a dacha of a new type. 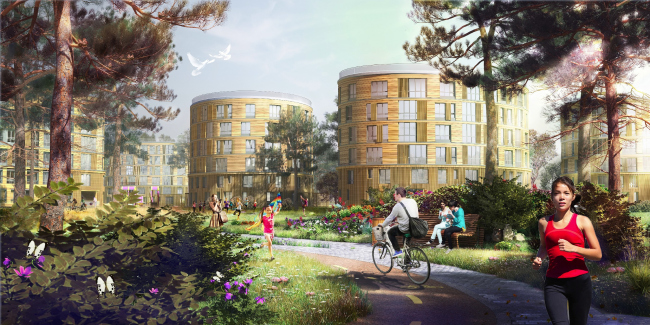 The coastline part of Saint Petersburg’s Kurortny district looks very much like Latvia’s Jurmala: a cold bay, a wide sand beach 50 kilometers long, and dunes alternating with pine groves. Once upon a time this place was buried under a glacier, and then it was the bottom of the Littorina sea, which left behind it this hilly terrain with small rivers, lakes, and moraines. It never ceases to amaze people how, after only a half-hour’s drive or local train ride away from the granite city you find yourself in such strikingly different seaside resort environment.

The area consists of dachas, health resorts, new and old, villa communities of different class, the “large” houses only to be found in Sestroretsk, a town with a population a little over 40 thousand people. And here is situated the apartment complex “Svetly Mir VNUTRI” (“Light World INSIDE”), marketed by Seven Suns developers as a health park.

The land site is really a fairy tale – a little outside the city, the former territory of the “Dunes” health center, a lot of trees, the first seaside line, the most beautiful sand beach in Saint Petersburg, “Laskovy”, is just a walking distance away; moving in the other direction, one will see the terrain cure facilities of the Kurort station. Yet another sight is Saint Petersburg’s one and only nudist beach that spontaneously appeared here a few years ago on a land spot behind the Malaya Sestra River. Sergey Oreshkin, whose architectural company prepared the master plan of the future complex, shares that the “underbelly” of the dunes, which slowly but surely gains an impressive height of 30 meters, forms a special microclimate, whose healing effect is further enhanced by the pine trees that back in the day were planted here specifically for the health center. It would have been impossible to refrain from such competitive advantages, and, therefore, the master plan was chiefly based on three factors, three “genii loci”: the dunes, the trees, and the bay views.

On the topographic footage, the architects circled the “islets” with valuable trees – squatting pines, elms, oaks, and firs – which allowed them to mark the buildable areas, predominantly on the north slopes of the dunes, where they placed the buildings, making their shapes fit in with the curves of the terrain. Then the architects began to turn the houses around in order to ensure that they command as many as possible of the bay views. The gaps between some of the buildings are filled by elliptical villas of a higher class; there are fewer apartments in them. The winding houses of the first line also serve as the wind screen for the inside territories.

Totally, the complex consists of 19 houses 5-6 stories high, which does not exceed the height of the pines – from the beach side, the complex is not exactly invisible, yet it peeks out from behind the trees in a very delicate way, chiefly thanks to its decoration materials: the ceramics of the add-on facade imitates the texture of a pine board. The complex boasts outstanding infrastructure: in addition to the habitual cafes and a kindergarten, it will include a healthy food store, a health clinic, a sports complex with a swimming pool, baths, a kite and windsurfing school, tennis courts, and even an institute for spiritual practices.

All of the roofs are operated, which cost the architects some certain effort, because they had to solve the issues of safe and comfortable operation. The boardwalks, pebbles, and the deck chairs all serve to create a seaside resort atmosphere – one can sunbathe here, do yoga, admire the stars and sunsets, as well as watch multicolored kites.

The developer wanted to create here conditions necessary for a certain lifestyle, very much of the countryside or health resort type: in the morning, there is a morning exercise session going on upon one of the roofs; then people go to have breakfast, then they can go cycling in the summertime or skiing in winter. In other words, healthy lifestyle all year round. 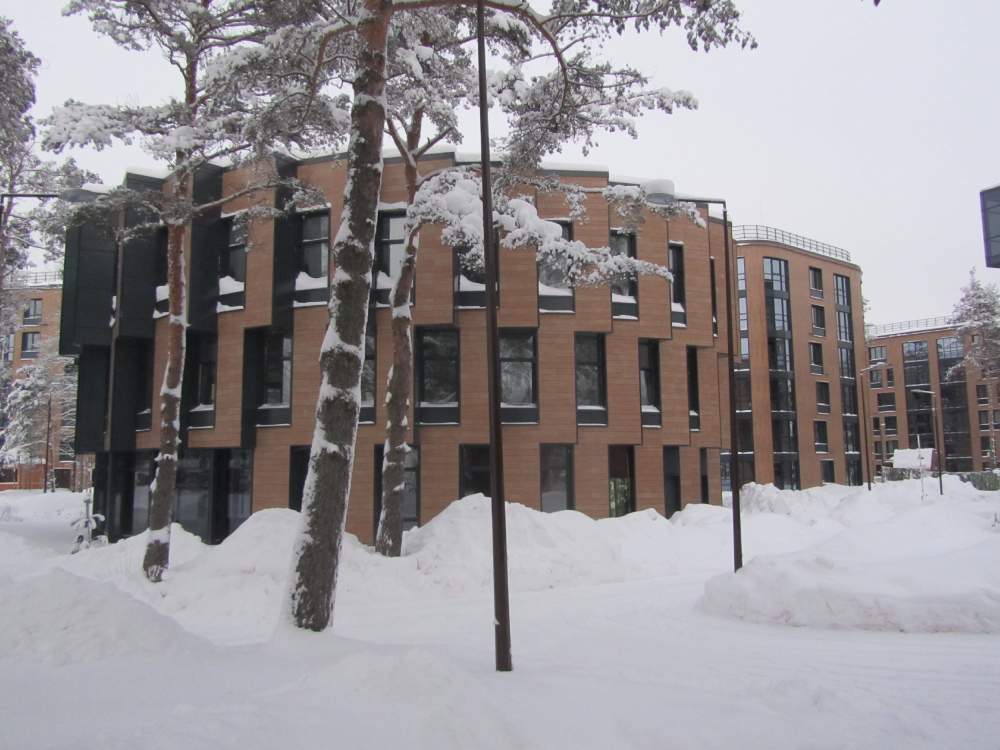 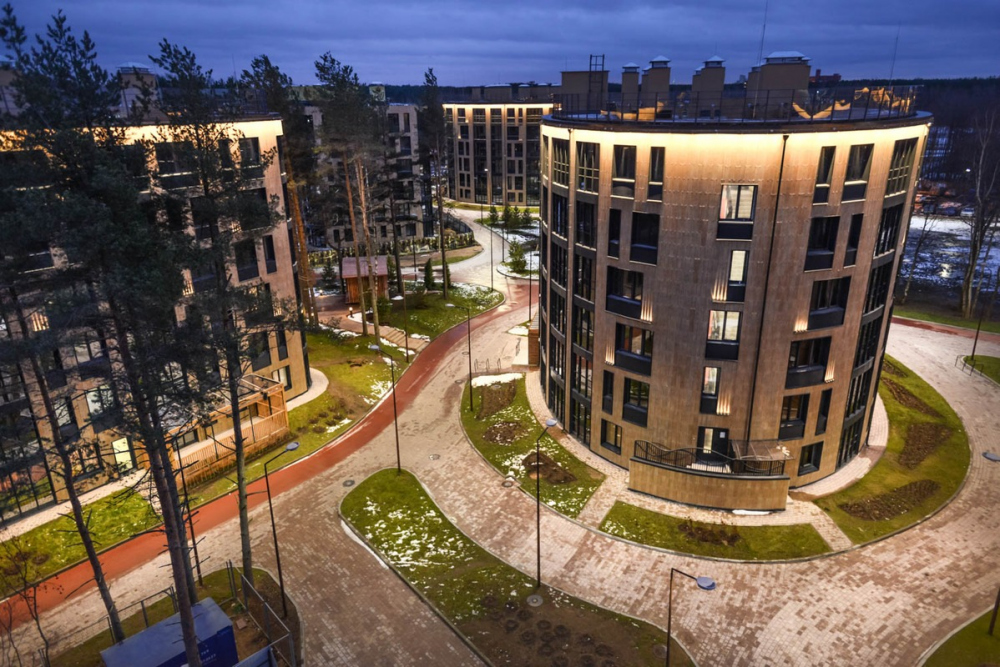 Designing the trails, playgrounds, and sports fields, the architects tried to turn the inner space of the complex into a landscaped park: the pine trees now complement the lawns with hydrangeas, barberries, and spindle woods. The children’s houses, gazebos, and other small architectural forms are all custom-designed in a single style. The motorists will have to leave their cars in the parking lot made at the entrance to the complex. “Svetly Mir Vnutri” has already scored a few professional awards for its landscaping project.

It is expected that the apartments ranging from 20 to 80 square meters will be used as vacation rentals or weekend homes: you enjoy the benefits of the countryside life, while the management company handles the lovely task of trimming the lawns. The picture is completed by barbecue places, where one can make a picnic in any weather; possibly, the complex will also include public greenhouses and vegetable gardens. The project was executed by AMM-Project headed by Yuri Mityurev on the basis of the master plan developed by A-Len. The layout was kept fully intact; what was changed was only the inside layouts of the apartments and the facade designs: the latter became flatter and more “Scandinavian”.

The initially proposed cellular structure of the buildings was smoothed out because of the wind load; the white ceramic tiles got replaced with wood-imitating ones. As for the apartment layouts, these were changed mostly due to the economic considerations: while A-Len followed the contours of the buildings and made the rooms of trapezoid shape, AMM proposed an orthogonal structure of the apartments, all of the complex curves going into the stanzas, which is simpler and less expensive. Svetly Mir VNUTRI is a rare case for Saint Petersburg: an interesting silhouette, almost wooden material, lush vegetation, diverse public spaces. One cannot call this complex perfectly contextual because, among other things, it does not say anything at all about the former “Dunes” health resort, and, due to its sheer scale, its influence on the surrounding scenery is quite significant. On the other hand, the architects and the developer are addressing the aesthetics of the neighboring countries lying just beyond the gulf; preserve the trees, and, especially, the atmosphere. Well, maybe not the atmosphere of a Saint Petersburg dacha – because its true style is a prohibitively expensive luxury nowadays – but for sure the atmosphere of a vacation rental, at which you’d love to spend a weekend or two.