​A Depot of Postindustrial Life

This project of renovating a derelict depot building is all about the architects’ keen attention to detail and emotional “texture” of the public spaces, diversity of functional content, and romantic interpretation of the idea of a ruin that turns into an extra scenario of the project. A concept for overhauling a former train depot

The building of the railway depot of the Kurskaya Railway was built in 1906; then it was deleted from the list of architectural monuments (which also happened rather a long time ago) and fell into decay. Over the years it stood abandoned, the building got into a deplorable state: it has graffiti splashed all over it, the paint is peeling off, and the floors are propped up here and there. The walls, however, are still standing – for the exception of the cross aisle that was dismantled in the second half of the XX century. The elongated building can be seen from the bridge of the Kazakova Street, which leads from Gogol Center to the Zemlyanoi Val Street; few people notice it, however, because today the building looks more like a ruin at the backyard of the “Citydel” office center and two once-tenements and now office buildings designed by Ernst-Richard Nirnsee when he was still a young architect. Meanwhile, the habitual route of the office workers walking to Citydel runs precisely past the depot when they are making a shortcut to the metro station and to the clubs of ARMA – a slightly weird but still a rather busy path. 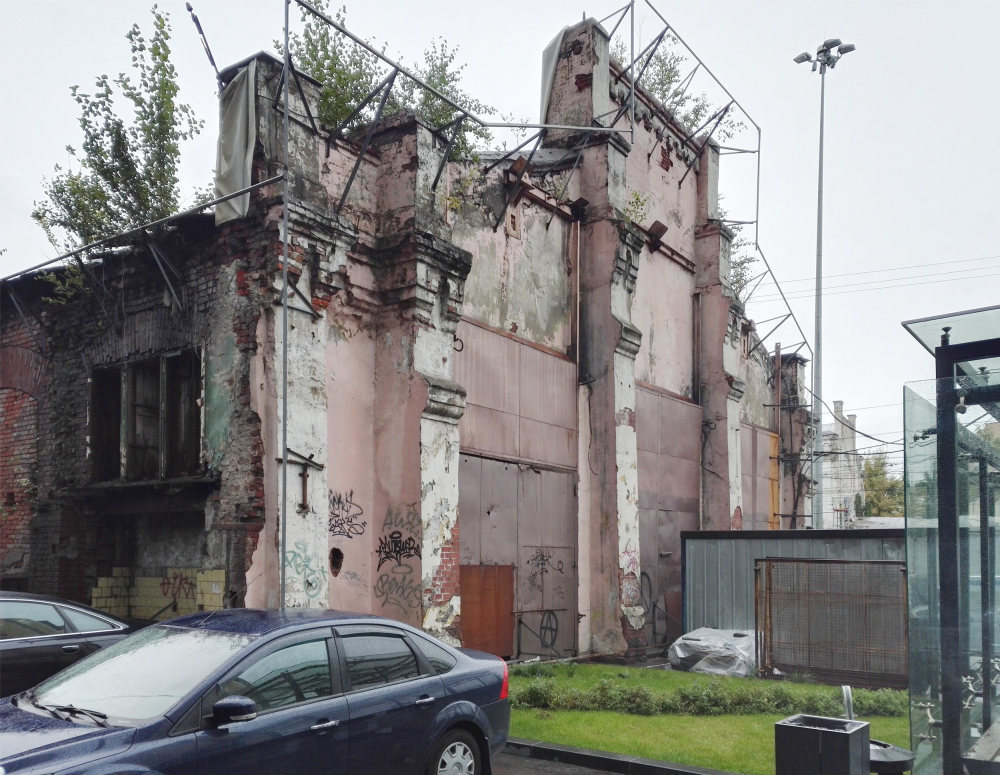 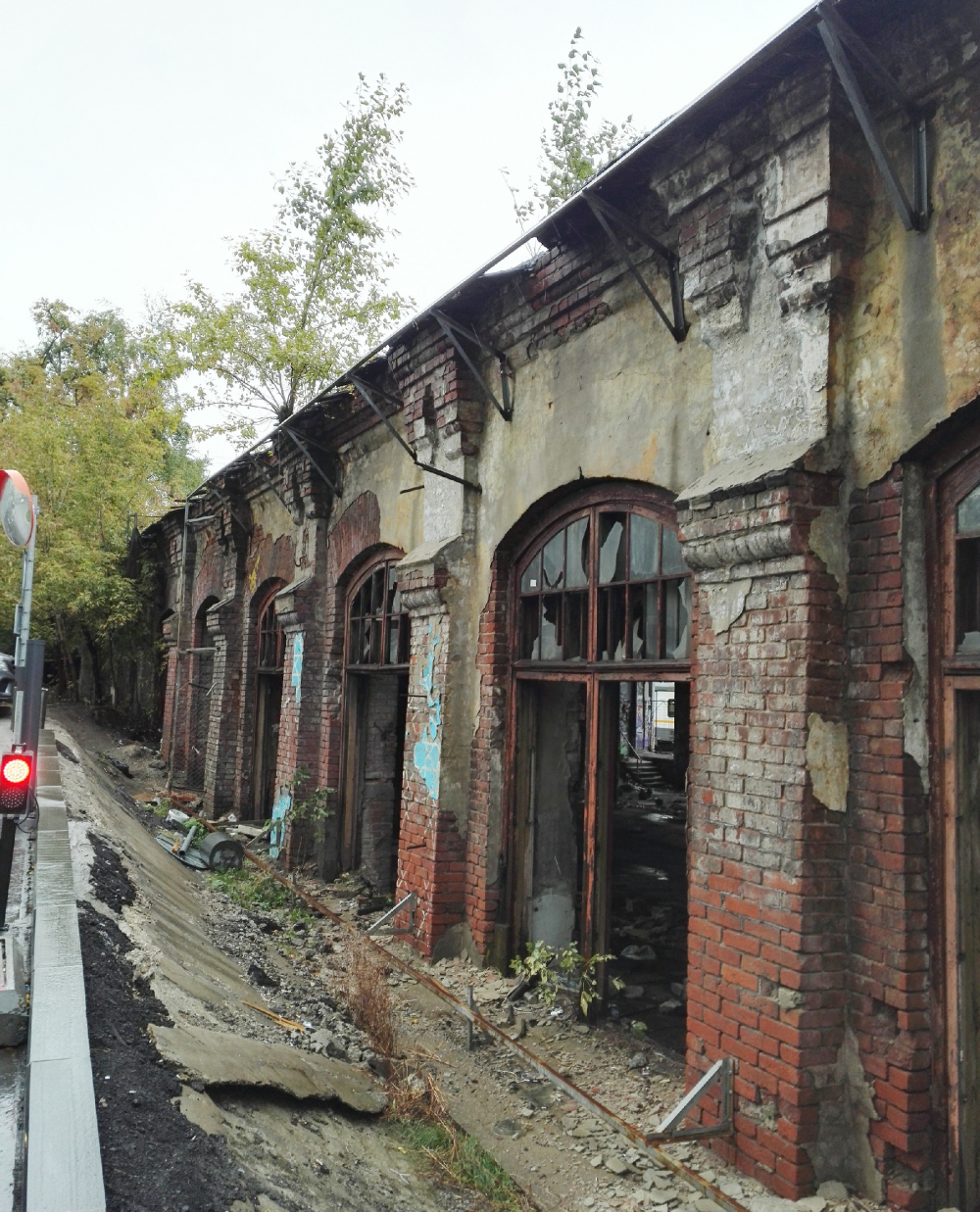 Essentially, it was this route that became the starting point of the project, initiated by the management of the neighboring business center in collaboration with a few partners. The functional program is very diverse and very modern because of that: in addition to the pavilions, the project provides for a co-working space and even a small office. Plus, cafés and restaurants: there are plenty of offices around, and the nearby cafés do not seem to handle the guest traffic, so, probably, new places offering a bite to eat will be in demand. 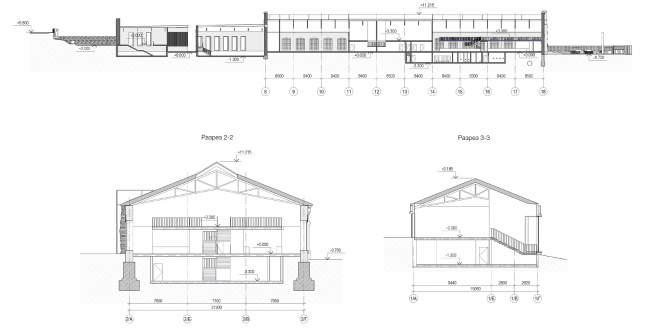 The route between Citydel and the Depot will stay – but it will be renovated and landscaped. From the side of the Kursky Railway Station, the pedestrians will be met by a small plaza situated in from of the south end of the Depot. Moving further along the building, we go past the main entrance and the ramp – the terrain goes up here – and come to yet another plaza with café tables, by the north end of the depot. Here the architects are proposing to make a stairway, by which one will be able to ascend to the bridge that bears a proud name of “Kazakovsky Puteprovod” – as we remember, it commands one of the best views of the depot, and by this bridge people also go to ARMA, but so far there is no stairway, and the pedestrians have to walk an extra distance to get to that bridge. 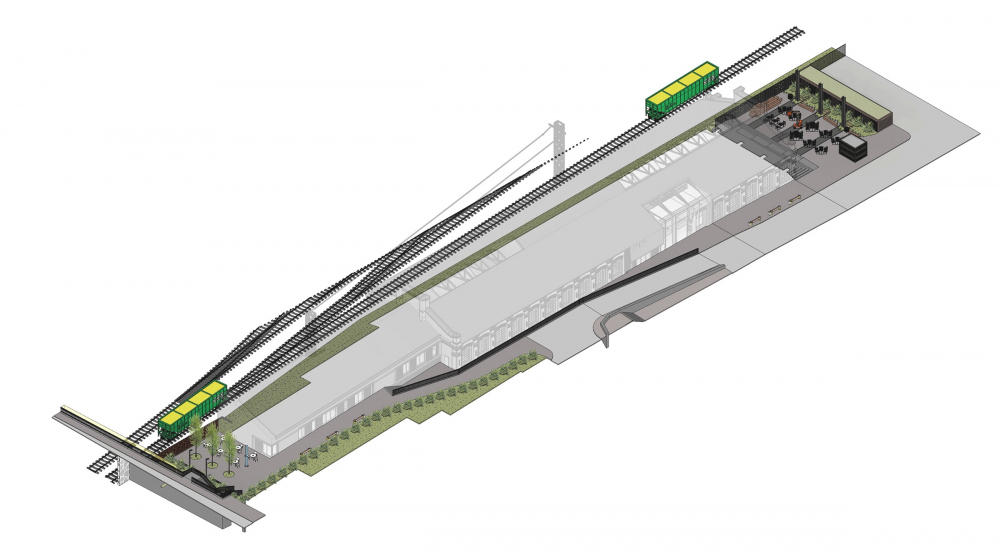 The building stretches along the pedestrian route, “escorting” the pedestrians and offering them a string of changing impressions. For this reason, the architects accentuated the lengthiness of the building: they extended it in the north direction, towards the Kazakova Street, proposing to dismantle a few small dilapidated buildings (looking more like barns) on this side and replace them with a new volume of approximately the same size but an integral one, with laconic façades, clad in dark brick of an elongated type (Petersenkolumba) like the plinth that was used in Ancient Rome, with windows reaching to the ground and inclusions of golden grilles. The new volume picks up the “brick” theme, yet in modern interpretation, sometimes even playing on the contrast of impressions and matching the current approach with the historical building, in which the bricks are large and terra cotta red, characteristic of the early XX century, and is subjugated to arches of the windows and scarce, yet important, details in the spirit of historicism. As for the Depot building itself, the project includes replacing the roofing in it – currently, the roof is simply propped up – and installing two skylights, about two thirds of its length: these will lighten up the food court and the rentable indoor cinema floors. The original bricks will be repaired, cleansed, and coated with hydrophobic substance; the roof will be covered by black-colored metal, the window sashes will also be black, as is the custom in modern reconstruction projects. However, besides the basic and quite expectable techniques, the project has in it a whole number of interesting features, which are essentially the constituent parts of its identity, gathered here rather densely, and it is these features that make this project different from many others of a similar kind, for example, from the Depot on the Lesnaya Street – the explication says.

One of the main narratives is the glass “showcase” on the elongated façade on the side of the main pedestrian traffic. What survived here is a semi-destroyed gable, a remnant of the earlier dismantled crosswise volume: the architects are taking the wall even more apart, opening up the interior view the width of about two picketed enclosures, conserve the ruined side walls and place the whole of it (both the gap and the ruin) – into a glass casing, as if this turning this splinter into a museum object, preserving the trace of the building’s history as a reminder of the long period of its abandonment and the part of it that is now gone. This romantic “ruin” installation is one of the signature techniques T+T architects, which vividly illustrates their approach to working with historical buildings: the urge to accentuate their age and their history with renovation transformations. The architects applied the same approach in the competition project for redeveloping the Shcherbinka water tower: part of the tower’s top was deliberately fractured in order to enhance the contrast between the old and the new, or even for a more vivid visualization of the unity and struggle of opposites. Anyhow, the glass “showcase” volume will glow at night and will by day demonstrate to the passers-by the insides of the building, and – like a decoration in the spirit of Hubert Robert – the fragment of the ruined wall. The ruin, however, is not the entrance – the entrance is situated more to the left, and it is marked by a “forehead” of a sheet of black metal hanging from the roof, which serves as a background for the heading.

The main façade of the building is situated on the sidewall, closer to the southern plaza, in front of the tripartite “basilica” façade of the Depot, that survived into the present in quite a decent state. Here one can see stone stairs with a ramp cut into them; on the plaza, there are three railway lines: on one side, they go under the stairs, on the other side they stop short in the grass, ending in “technological” street lights made from double-L beams. The plaza is separated from the real railroad by a metallic fence that imitates a concrete PO-2, yet also, just like the brick wall, deliberately ruined: it looks as if it were turned into a grille from formwork. In front of the fence, there is a transformable amphitheater made of wood blocks. From the opposite side, the space is separated from the pedestrians by a maintenance cabin decorated with fragments of a Soviet cast-iron fence of overlapping circles and meander. This place, as we can see, is filled up to the brim with memories and narratives that make the local environment very interesting. From the outside world, the plaza is separated by a brick volume: it conceals the garbage bins, but the grilled doors are turned outside; what is turned on the outside is the textured brick wall, reminiscent of the new office building in the north part of the Depot. 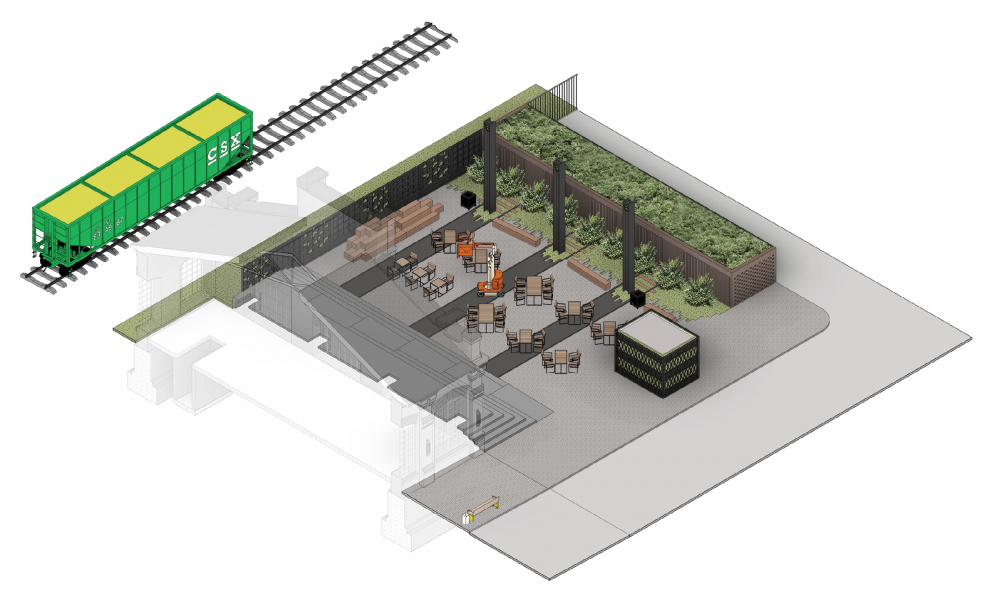 The next plaza, situated in front of the Kazakova Street and the stairway, which is currently in design, is slightly smaller, is protected from the railroad by a slit metallic fence, the other two borders being the building of the Depot and the slope under the pathway. There are plans for making it completely green, and installing benches along its edges, as well as placing tables, artifacts, and, possibly gaslights on the plaza. This way, the building is getting attractive functions, such as cafés, a co-working space, and a studio floor, which it will be possible to use for organizing concerts from time to time. The path running alongside it is also filled with impressions and emotions. What’s more, however, is the fact that in this project the building of the Depot gets yet another façade – the view from the bridge on the Kazakova Street. From this side, the land site is diagonally crossed by the railway power line, one support standing before the façade of the depot, the other cutting into the northern annex. “Since removing these supports was absolutely out of the question, we decided to make the most of the situation, turning them into an artifact” – Sergey Trukhanov says. The north construction was placed in a yellow-colored recession, and, since the neighboring corner is cut through by a window, the evening backlights bring out the “1” digit that enters into a rhythmic resonance with the asymmetrical side end of the new building and the symmetrical outline of the old one. The recession of the grilled support works as a giant signboard and is sure to attract people’s attention, as if marking the fact that there is a new interesting place here, down below. A worthy addition to Vinzavod, ARMA, and Artplay in the industrial park of the Kursky Railway Station, which is arguably the most developed one in Moscow, but which, as we can see, still has some room to grow.

The project of reinventing the derelict depot building near the Kursky Railway Station is comparatively small but really attractive and trendy: it belongs to the postindustrial society, balancing on the verge of landscaping, urbanism, reconstruction, and preservation. The historical building is matched against the modern one, and they both “grow into” the urban environment and become its active part. All of this comes as no surprise for T+T architects, who are widely known for their urbanist works and for the projects having to do with preserving and revising the heritage of the industrial architecture, the interest for which the architects constantly keep up, just as their desire to do cross-specialty projects and be as versatile as possible. One must admit that the combination of different themes is probably the perfect tool for making the city come alive and turning it into a great place to live in – through finding the seemingly quite unassuming gems with a huge public potential.