In their project of MITTE club house, the architects proposed a model for developing the territory adjacent to the main land site, proceeding from the method of working with the urban environment in the namesake district of Berlin and the characteristic features of Moscow architecture of the brink of the XX–XXI centuries. View of the apartment complex from the yard © APEX project bureau

The north part of the Danilovsky district of Moscow, delineated by the Letnikovskaya Street and the bend of the Moskva River, can serve as a fine example of town planning chaos of the “rusty belt” of the nation’s capital. Like a mighty wave, the transformations are spreading away from the Garden Ring, and after they join forces with the program of reconstructing the embankments of the Moskva River – with quays and new riverside recreation areas – this district will turn into one of the most prestigious and quickly developing ones. Thus, it comes as no surprise that the forward-looking developers are already initiating on both banks of the river new top-class projects, one of which is the club house with apartments, designed on the Letnikovskaya Street by APEX project bureau for Hutton Development – the house got a name of MITTE. In this area, which is now gaining the momentum of the conversion transformations, the architects saw an analogue of Berlin’s Mitte – hence the name of the complex. Famous worldwide for its creative and comfortable atmosphere and mottled environment consisting of residential and office buildings mixed with shopping and entertainment centers, this district gradually filled in all of the lacunae in the city fabric of East Berlin. In the chaos of the Moscow area in question, the architects saw a similar potential and suggested that the developer give this house a name that is symbolic of modern standards of comfortable life in a megalopolis. The only fragment that bears any resemblance, if any, with a street front, is in fact a series of three houses built in the early 2000’s on the even side of the street, right across from the land plot that was allotted for the construction of the MITTE club house, and this proximity gave the APEX architects an opportunity for creating a model of the future project, the way they saw it by analogy with its Berlin’s namesake. The future club house will become the missing link, thanks to which a starting point for the future projects will appear – in fact, it will become cornerstone of the future construction.

There were several ways of designing and positioning the house on the trapeze-shaped land site that the architects ultimately got (in the shape of a cylinder, a prism with rounded corners, a three-faceted block, etc.), and all of them were considered but ultimately the logic and rational approach prevailed. The designers opted for an L-shaped building with one skewed corner overlooking the never-built highway and forming a dramatic volumetric effect in the spirit of the “Pressing Iron House” on Moscow’s Khitrovka Street. In order to make sure that no useful floor space goes to waste, the architects designed the building as closely to the borders of the land site as possible. There is but one exception: from the skewed side, they had to step back 4.2 meters in order to provide the mandatory fire lane. Yet another recession from the perimeter, this time on two upper floors, at a level that coincides with the cornice mark of the building standing across from MITTE, was needed for building up a more balanced town planning dialogue.

The floor plans of the L-shaped buildings could be considered rather traditional, if it were not for the fact that the architects introduced into the project a few solutions aimed at optimizing the use of the floor space and based on the recently-changed preferences of the buyers of such type of property. 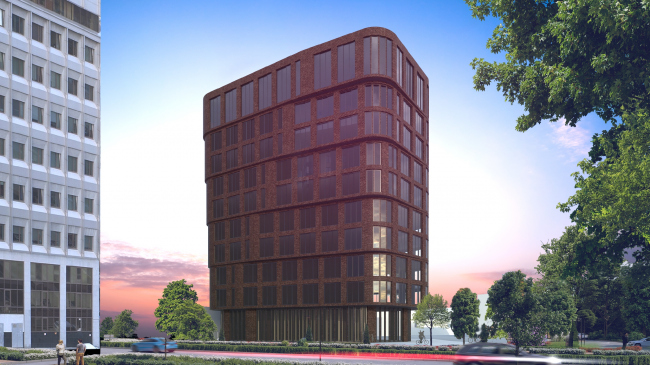 What does not at once meet the eye is the original approach to positioning the staircases inside the stairway and elevator nucleus. According to the safety regulations, the house must have two staircases in it, but at the first glance at the plan you see only one. In actuality, however, one staiwell has two staircases with cross-crossing flights of stairs in it, each of which is meant to serve the residents of one of the wings. By Moscow standards (and by the Russian standards, for that matter), this kind of two-flight staircase is quite a rarity but the architects were still able to procure the appropriate approvals both from the developer and the EMERCOM.

On either side of the L-shaped corridor in the center there are apartments, whose floor space ranges from 27–28 square meters for a studio to 45–48 square meters for a double-room block, and a little over 60 square meters for a three-room block. In addition, each customer is entitled to buy a few blocks and join them together. A distinctive feature of the floor plans of the residential blocks is the inclusion of kitchens into the public zones, and in the most compact apartments the kitchen is situated in a pass-through corridor that leads from the anteroom to the living room. By sacrificing a private kitchen, the architects were able to allot more space to the sleeping zone that is essentially an alcove with a king-size bed. While quite recently such shift in the priorities could shock and scare many buyers away, what really matters for the target group of MITTE is good night’s sleep, and not some culinary experiments at the stove, all the more so because the modern “young and active” generation prefers to use food delivery services.

In spite of all the rationality of their approach to the town planning and design solutions, the architects did allow themselves to make a few rather radical experiments with the façades of the future house. As is the way with APEX, a few (in fact, more than 10) options were considered, exploring the possibilities rhythmic organization, plastic deformation, and stylistic adaptation. The facade on the Letnikovskaya Street © APEX project bureau The chief architect of the project, Sergey Senkevich, says: “In many of our projects, we try to use the façade grid. Probably, this is the influence of the school of thought of Vladimir Plotkin, for whom I worked after I graduated from the university, and to whom I am really grateful. And I am sure that designing in just one module does not limit the architect’s scope but, quite the opposite, gives him extra freedom and a guarantee of high-quality result. This principle never fails, it works for any architects, no matter what school they come from”.

As a result of the search, an interesting structure of two shells was formed: the massive outside grid made of bricks, and the inside system of stained glass windows, encased in a framework of metallic bronze-imitating lamellae that give protection from the sunlight. The space between the outside facets of both shells is only 1.5 meters but visually it looks greater at the expense of the perspective brick portals and their double height. In addition, one’s perception is also influenced by the 2-meter depth of the open-air galleries on the first floor, which lead to the public premises. The resulting cantilevered structure eliminated the need for the traditional awnings above the hallway entrances, for the sole exception of one that performs the role of the accent above the grand entrance. A fragment of the facade with perspective portals © APEX project bureau The resulting structure echoes the façade design of the house that stands across the street, and remotely resembles the concrete “frameworks” and the anodized stained glass windows of the houses built here in the 1970-1990’s of the last century. Thanks to these associations, the perception of the house changes, and its “Berlin-style” reserved architecture get a fair bit of “Moscow” flavor, so vital for fitting with the context.

The use of the white color on the façade of the club house, as an offset to the rising trend of dark hues is also partially an homage to the image of a “guest from Berlin”, and yet another reiteration of echoing the neighboring house. In the case of MITTE, both the architects and the developer placed their bets on the high quality of the hand-molded brick manufactured by the Wasserstrich technology. According to the architects, this brick will look particularly beautiful in the perspective portals of the window apertures on the main façade of the building.

The architects also proposed to make a small garden on the roof, as well as recreation zones and an amphitheater, equipping it with gear for watching movies on a pull-out screen at night.