From a Co-mmune House to Co-living

In the apartment complex CO_LOFT, designed by DNK ag, the industrial heritage of the 1930’s is reinterpreted through the ideas of the 1920’s, when the search for new types of housing was one of the main branches of architecture. The name of the apartment complex CO_LOFT, situated near the Tulskaya metro station, reflects two paradigms – its former industrial function and the idea of a commune house, which is essentially close to the modern idea of “co-living” that is becoming ever more popular nowadays. 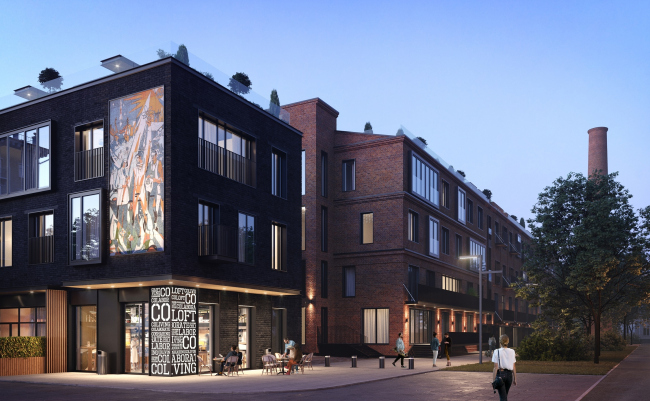 A rather compact land site, which includes 3 and 4-story buildings, is situated near the Serpukhovskoy Val. Until recently, this place hosted the electrical measuring instrument factory, whose history can be traced back to 1935 when the first typewriter and adding machine repair shops were opened here. The first buildings of the complex are known to refer to the break of the 1920-1930’s. There was also a boiler house, the remnant of which is a tall chimney – a peculiar centerpiece of the entire block. Most likely, the boiler house was a part of the housing project designed for the workers of the factory “Novaya Zarya” built in 1928–1930 by the project of the architects Ivan Zvezdin and Mikhail Motylev. Over the long time of their existence, the workshops expanded, the buildings were reconstructed, and the complex got numerous annexes. This chaotic construction cannot be called an ensemble by any stretch of imagination: the different sizes and colors of the annexes, combination of panels and all kinds of other construction materials make it impossible to speak about any prominent architectural character. However, it is the history of the place, as well as the constructivist tradition of this area of Moscow, that became for DNK ag one of the sources of inspiration for coming up with the concept of the apartments. The neighboring residential area designed by Zvezdin and Motylev was devised as an ensemble that presupposed the creation of a few housing communities – neighbors connected by common day-to-day interests, working routine, and spending their spare time together. The idea of joint pastime of the residents constituted the basis for the project of redeveloping the industrial factory complex, and to a large extent defined the functional zoning of CO_LOFT, while the rescript of buildings of different characters and ages was turned by the architects into an exciting play of volumes and textures. 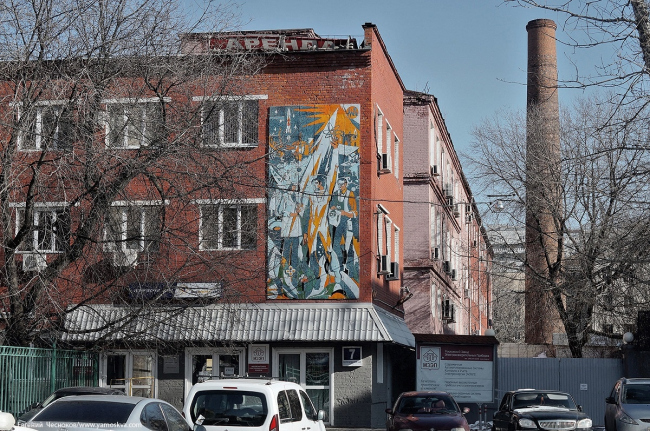 CO_Loft. Before the reconstruction © DNK ag

“Working in the conditions of a living urban environment, we wanted to find some theme, some source to draw inspiration from, because these buildings do not really look like they have any visual value or attractiveness – shares the architect Natalia Sidorova – The context, and, specifically, the numerous constructivist projects in this area of the city – the area of the Khavsko-Shabolovsky complex and “Novaya Zarya”, together with the Shukhov Tower – gave us one of the starting points for designing the inner structure of the complex, in which an important part is played by the public function. At the same time, it was important for us reflect today’s identity and the diversity of life. And all of this turned out to be quite resonant with the client’s desire to create something unusual and modern, and at the same time having historical ties”.

A Song About the New Way of Life

The approach towards reinterpreting the industrial territory under the new realities, proposed by DNK ag, allowed the company to win the invitation-only competition, and coincided with the client’s desire to develop the concept of a residential complex with elements of co-living in it, a new housing format, which in many respects resembles the soviet “commune houses” of the 1920’s, the difference being that it offers more comfort and satisfaction of individual needs.

Back in the day, the new “way of life” of the young socialist state required new solutions for the housing construction. The commune houses or “house-communes” with their communal education of children, food preparation, household chores and recreation, whose purpose was “to get rid of the yoke of the household economy’, were essentially a response to the fast-paced industrialization and urbanization: the lack of useful floor space of the housing “cells” was more than outweighed by the “socialized” public spaces – the habitual kitchen gave way to a canteen, and the questions of spending one’s free time were solved by a public library and playrooms for children. Paradoxically, today, almost a hundred years later, the ideas of socialized way of life became relevant again. The technological development, the information revolution, and the global spreading of homesourcing brought some major changes to the public/private ratio. Similar actions performed on one common platform are the sign of modern times.

DNK ag are interpreting the theme of a commune house in an extremely graceful way, delicately entwining the platform for joint activities into the fabric of the complex. Caused by a multitude of random factors, the complex configuration of the project resolves into singling out the central nucleus with public spaces and placing the apartments or “housing cells”, as they would have been called a century ago, along the perimeter. Two historical buildings – one made of prefab panels, the other from brick – come together at a right angle, the third standing away from them. Together, they once formed a semi-open yard, which was filled, already in the 1960’s, with a volume of metallic structures coated with profiled sheeting – they formed a transition block between the buildings. According to the project, now this place hosts a co-working space, a reception, a gym, and a laundromat – everything that one needs for fruitful joint actions. One can get here through the main entrance passing through a little square. 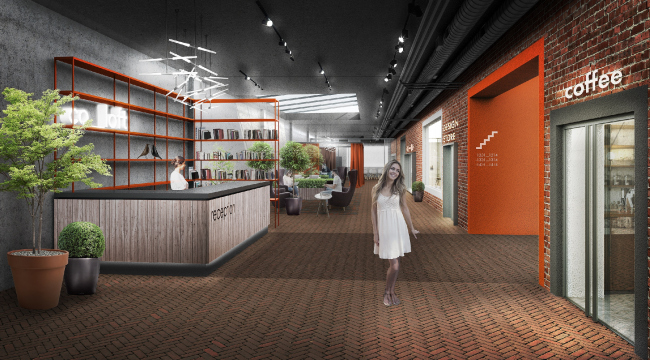 The basement floor of the four-story-high building also includes spaces for commercial premises adjacent to the public nucleus. The combination of business and housing functions that you would naturally expect from a loft is viewed in this specific instance as an opportunity to do some kind of business that would unite all of the residents of the complex.

The central nucleus also includes a parking garage with a convenient driving entrance on the first and basement floors. The underground levels of the residential units are also equipped with storage lockers. It is also planned to make the residents’ life more diverse at the expense of various services, the operations of some of which is supervised by the community manager who also acts as a community moderator.

All of the former factory buildings consist of apartments. The architects are preserving the dimensions and the numbers of floors, at the same time modifying the façades in full accordance with their new function.

The range of the apartments in the complex is quite diverse; almost each of the apartments is endowed with some unique qualities, which brings us back to experiments of the 1920’s aimed at crash testing various life scenarios in such houses and various arrangements of their premises. The first floor of one of the buildings will include double-side two-level apartments with a cute little garden of their own – a curious analogue of a townhouse. In another building, single level apartments will have patios of their own; these little gardens form something like a street writhing the block. 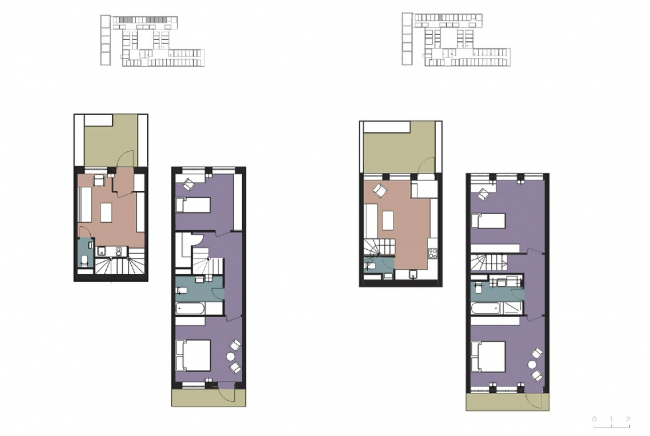 The apartments of the studio type – with a small floor space of 20 square meters – are essentially modular cells that can be joined together within the framework of the bearing structure. The apartments in the narrow building. CO_Loft © DNK ag

The apartments with an unusually elongated floor plan, whose configuration was conditioned by the width of one of the units, are comparatively small in terms of their floor space but they still have an advantage of numerous windows, which makes it possible to zone the space in different ways, forming a few “rooms”. Most of the apartments have balconies, sometimes of the “French” type, sometimes regular ones.

Another feature of the complex is the usable roof of the residential buildings and the underground parking garage. The residents of the upper floors and the apartments adjoining the inner patio are able to walk out on it, thus getting a “hanging garden” of their own. The project is also not without two-level apartments – as we remember, the housing cells of the experimental houses of the 1920’s also oftentimes had two levels, as, for example, the K-type cell in the famous Narkomfin Building. In the modern Moscow design, two-level apartments are a disappearing rarity, and these certainly add the complex’s “typological” charm. The apartments with an exit to the roof. CO_Loft © DNK ag

The New Look of Factory Clothes

The subsequent layers of time also got reflected in the coating textures, as well as the materials of the outside walls. The most “recent” block of metallic structures – the heritage of the recent soviet past – got glass façades, which serve as a link between the two “more material” brick buildings. The four-story building, the oldest in the complex, whose first floor hosts various businesses, is the brightest reminder of the industrial past of this place. Its red-brick walls will be cleared up, while the new residential function is signified by the balconies and bay windows. The tall chimney of the boiler-house is turned into an artifact, also reminding us of the original function of this place. The small brick building with little gardens is decorated in dark-gray colors. The architects added low window sills and glass bay windows with sideshift slide frames of various proportions that came together to form a rhythmic composition defining the individual character of each of the cells. The main peculiar feature of this unit is a mosaic panel picture that survived from the times when this building hosted the electrical devices factory. This is the heritage of another period in the life of the complex – the epoch of modernism.

Amazingly, the subject matter of the picture – innovative technologies, a community of people of different professions – is resonant with today’s way of life and the concept of the project. The third building, alongside of which also stretches an array of little gardens, has original façades that highlight its original structure. According to the project, it panels are to be dismantled altogether to be replaced by brick.

The two-level apartments stand out thanks to the different color of their bricks; the flat-surface solution is diluted by windows or different width and bay windows.

The third level with single-story apartments and a corridor that unites them inside (and on the façade) is designed as a single-cut one, which gives it a mansard character, strengthened thanks to the use of the terrain – the vertical rhythm of the brick ribs visually stretches this level up. “What we wanted to do was preserve in this complex its history that has been naturally formed – says Natalia Sidorova – It was very important for us not only to gracefully introduce the new functions but also highlight the legacy and historical individuality not just through preserving the artifacts – the chimneys and the mosaic panels that we, of course, regard as important elements of implementing our idea – but also by demonstrating the architectural layers of many year”.