Did SPEECH work with the Luzhniki Arena since 2013 or did you plug in later on down the line?

Since 2013. The company “Mosinzhproject” ran a competition for the best designer, and we won it. Further on, under the supervision of Moscow’s building complex, the main architect of the city and the already-mentioned “Mosinzhproject” we did the sections entitled “Architecture”, “Technology”, “Master Plan”, and also conducted the author supervision over the implementation of the project of refurbishing the Luzhniki Stadium. In addition, it was SPEECH that did the reconstruction of Luzhniki infrastructure projects – totally, there were 16 of them. Among these were cash offices, entrance and service pavilions, checkpoints, training fields with spectator stalls, a children’s sports zone, and a service center for street sports. The description of your project mentions the fact that you preserved the mold of the roof. What about the roof itself – is it new?

The roof is the same as it used to be. It was made of polycarbonate, and it remained that way, the only difference being that now we used polycarbonate conforming to the new fire safety requirements G-1. However, according to our project, a marquee was built that provides extra comfort for the spectators both on sunny days and in the rainy weather.

Do I get it right that, in order to optimize the view from the spectator seats and to boost the number of seats up to 81 000, you had to replace everything that was there on the inside, for the sole exception of the outside wall contour? What were the difficulties that you ran into in the course of the working process, and how did you handle them?

Yes, the old stadium did not conform to the FIFA standards. Specifically, it had an insufficient seat capacity, inadequate breadth of the seat rows, as well as an insufficient amount of bathrooms and cafeterias. In addition, too many of the spectator seats had a limited view, and there were too few spectator seats for people of limited mobility. Therefore, the key task of the reconstruction project was, on the one hand, keeping the outward appearance of the stadium as the icon of Russian sports – the historical walls and the roof of the stadium – and, on the other hand, fulfilling all of the FIFA requirements for the square footage and spectator seat capacity. In other words, we had a task of inscribing all of the new functions into the existing geometry. And this in itself was the most difficult challenge of all.

If you remember, in 2013 they even seriously considered a prospect of tearing down the stadium altogether and building a completely new arena in its place – and we must say thank you to Moscow government that this historical building was ultimately preserved. The historical importance of this edifice, this timeless monument to sports, outweighed all the other considerations. And our project was specially developed with a view to prove that fulfilling all of the FIFA requirements was indeed possible within the historical contour of the stadium. At the same time, barring the historical walls and the roof of the stadium, absolutely everything was replaced – it is a 100 percent new stadium on the inside.

The fact that the spectator seats have been moved closer to the field, and that the angle of their elevation is increased, is covered by all the industry media. Is this really the main technical innovation in the implemented project? And, even if it is, what else is technically new?

First of all, we were to leave the elevation level of the field as it was – because of the proximity of the soil water. In order to ensure the required capacity of 81 000 seats and the requirements for areas for various spectator groups, we had to move the seats closer to the field – and we were able to do that at the expense of removing the running and track and field lanes, which used to circle the football field along its perimeter. Instead just one tier of stalls, we designed three tiers, the ring of the middle tier being occupied by skyboxes – a hundred units for 1950 spectators, as well as 300 VIP seats. And in the gap between the upper in the lower stalls, there are 300 seats for people of limited mobility.

The main means of locomotion inside the stadium are cascading stairways, which are separated from the historical wall by an inside street, thanks to which, by the way, the façade of Luzhniki is now perceived not only from the outside but also from the inside. Among other things, the stairways take the spectators to the distribution gallery that runs 23 meters above the ground – this space at the same time serves as a sightseeing platform that commands fine views of the city center and the Moscow City skyscraper business complex. 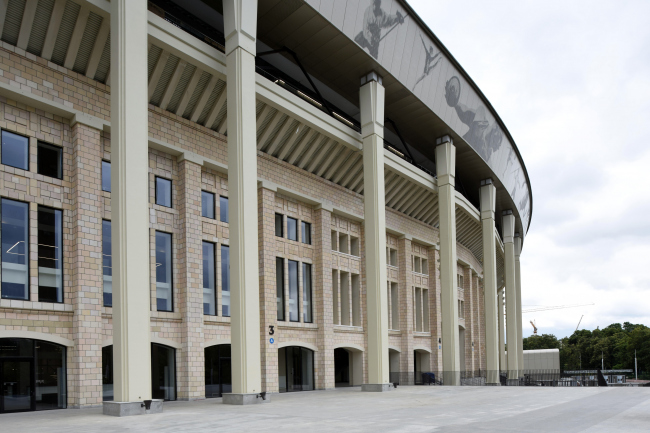 The graphic design of the frieze on the attic part was done by Artemy Lebedev Studio. Is this your first experience of doing such a collaboration, and how do you evaluate it?

This was our first experience of collaboration, which led to me recommending Artemy Lebedev Studio for two other of our projects. So, yes, this was a positive experience. The frieze was there all along – as an element that decorated the roof’s outer bearing ring. However, it was made of metallic cassettes, which by 2014 totally fell into decay. The frieze was very far from aesthetically pleasing. However, at the same time it was clear that we couldn’t do without it. And we took quite a long time thinking over the new image of this element and its execution. Ultimately, we came up with this idea to apply perforation, and not just any perforation but the kind that depicts athletes symbolizing various kind of sports, which were related to this stadium, including during the 1980’s Olympics. 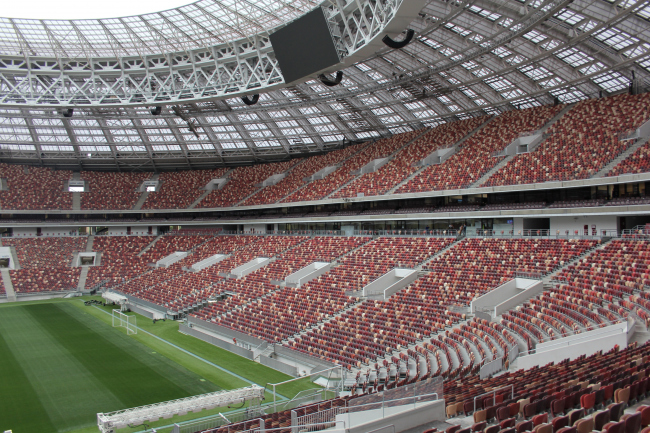 Did you ever support any sports team or is it that building stadiums is only a matter of architectural art for you?

I was a huge fan of the Russian team at FIFA 2008. They took the bronze medal at the European Championship. I vividly remember us coming to some huge restaurant in Berlin and shouting for our team – I literally lost my voice then. But I don’t have any fave teams, and I am not a fan in the classic sense of this word.

Currently, the architectural community knows really well the Palace of Water Sports, the Dinamo Stadium, the Krasnodar Stadium, and the Big Sports Arena as the climax of the sports facilities that SPEECH has designed. Can I ask you to get back to the very beginning and remember the first sports facility that you ever designed?

It was the Palace of Water Sports in Kazan that was the first sports facility that we designed.

What would you name as the main challenge in working with a large-scale stadium – the construction set, the bright imagery requirements, deconfliction of streams or perhaps something else?

The projects of sports architecture are always customized and individual. If you design an office building, all you know about it is that after it is launched into operation, some renter will move in. Or some renters. And as for sports facilities, they are always designed for some specific team or for some specific event, their schedule, as a rule, being known for years to come. And this is what raises the bar and sets the most ambitious targets for the architects – tasks that have to do with constructive solutions that are meant to work tomorrow just as well as they work today. And, of course, unlike the other functions, a stadium is always about the architecture of big forms. When you design a stadium, you have to make fewer decisions that you have to make once and for all, but these decisions had better be the right ones because they have a high degree of multiplication.

The architecture of the Krasnodar stadium is, let’s say, “latent classical”, very much in the spirit of the 1930’s. The Big Sports Arena, built in the 1950’s, is also quite classical, and in some way they are even resonant with each other. What are we to expect next? A super-modern iconic stadium or would you prefer to work, in the case of new scenarios, in the classic paradigm of the colosseum?

It all depends on the context. Today, the way I see it, we no longer see the approach towards architecture as some sort of a blueprint – I am talking about a situation when an architect comes up with this or that type of a building and then tries to reproduce this pattern in different points of the globe and in different situations. True, there are still such builders out there, but they are few and far between, while modern architects at large pay much more attention to the context in which they do their projects. And it is my personal belief that if we are to think about the next projects, including sports facilities, their image will first of all depend on where they will be situated and for whom they will be designed. In any case, this must be architecture that is thought out and implemented on a high-quality level down to the last detail.
Text by: Sergei Tchoban, Julia Tarabarina
Translated by Anton Mizonov 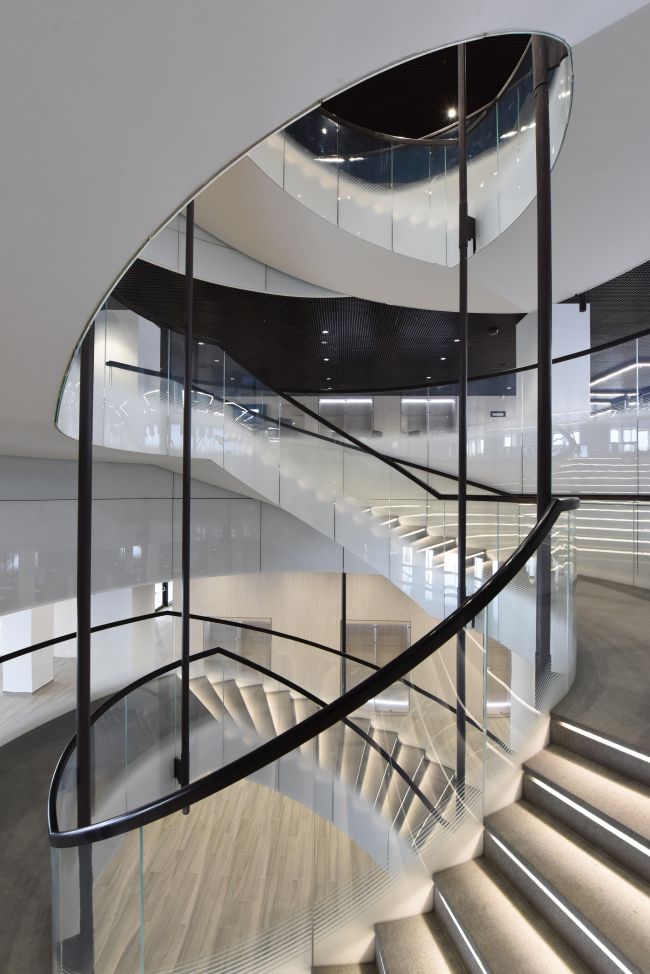 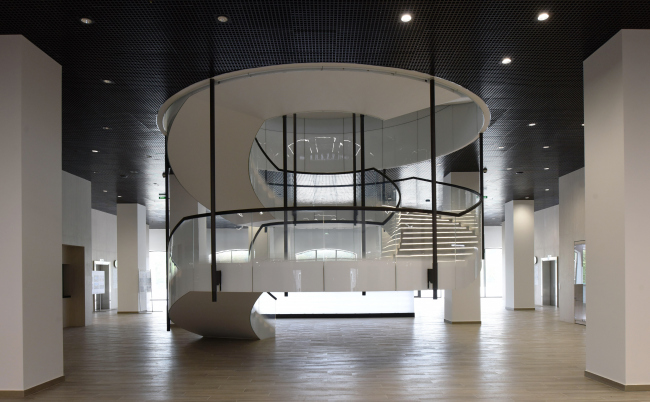