How do the architects see the perfect cities of the future, and what must be done to achieve that ideal? Below is a report from the exhibition called “Ideal and Norm” and a conference that accompanied its opening with the participation of Scandinavian architects. The exhibition is taking place within the framework of the annual festival called “Cities of the Future / Future of the Cities” organized by “Project Baltia” magazine in collaboration with Committee for Urban Development and Architecture of Saint-Petersburg. The festival’s venue alone – the new stage of the Alexandinsky Theater – is enough of a reason for visiting this exhibition: its light-colored hall, where the old and the new kinds of architecture meet, is the perfect place for such small-scale events. But then again, it is only the exhibition that can be considered “small-scale” – six wooden stands, one side of each displaying an image of the ideal, the other – the norm, the routine, something that we all get to deal with today. As for the conference, the media lounge did not have enough room for housing it – the audience would stand, sit on the stairs and folding chairs, just like they would at a lecture of some acclaimed professor in Sorbonne. After the first few presentations, though, one could definitely feel that it became easier to breathe, but still, such a surge of interest to the urbanist futurology is nothing but remarkable. The ideas presented on the stands vary from down-to-earth and familiar things to the starry-eyed search for the absolute good. For example, Sergey Tchoban presented a pair of opposites – modern versus traditional city – showcased in the form of architectural graphics. Stepan Lipgart, on the other hand, presents the antithesis of the down-to-earth city as soaring space structures in the spirit of Kalatrava, which were shown at the conference to the accompaniment of The Poem of Ecstasy by Scriabin. The sketch-board for the "Ideal and Norm" exhibition © Sergey Tchoban. Image courtesy by the "Project Baltia" magazine 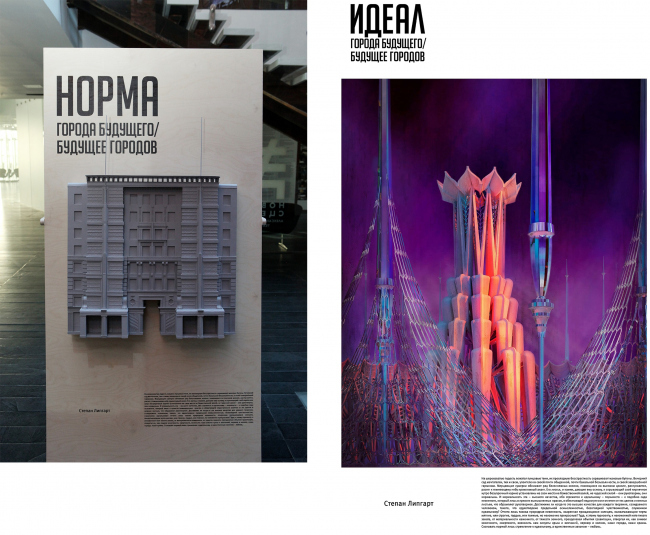 Between them, there are more specific questions: the perfect plan of a city, a district, or a house.

The sketch-board and the presentation by the architects of the Saint-Petersburg office of MLA+ caused a lot of controversy: they proposed that a city should be made as dense as possible.
According to their estimates, today’s urban environment of Saint-Petersburg is quite capable of housing about 77 millions of apartments, which will make it possible to refrain from expanding the city boundaries for another decade.

“Urban densification”, however, is not quite the appropriate term. Rather, what we should speak about here is making the existing environment healthier at the expense of pinpoint introduction of multifunctional buildings that will help to form new streets and blocks and generally make a more efficient use of this or that city neighborhood. The sketch-board for the "Ideal and Norm" exhibition © MLA +

The city was broken down into districts (about 300), and the construction was subdivided into morph types: the historical center, the gray belt, Stalin-time houses type M, Stalin-time houses type S, Khrushchev-time houses, Brezhnev-time houses, post-Soviet construction, and small privately owned cottages. The Stalin-time houses, the architects believe, almost do not need to be densified at all – they are a comfortable place to live as it is, and it is Important to keep it that way. And as for the gray belt, Khrushchev and Brezhnev-time houses, these are definitely in need of being densified because in those areas the land use efficiency index can be raised from 1.44 to 2. The problem of the absence of large vacant chunks of land is easily solved – by grinding down the typology of the “injections”. The authors studied their predecessors (от Christopher Alexander to Alexander Vysokovsky) and created something very much like a manual for working with each of the morph types. The sketch-board for the "Ideal and Norm" exhibition © MLA +

“Studio 44” showcased their project of an ideal micro town that, regretfully, was to remain on paper – it is a housing project situated on the alluvial land next to the settlement of Gorskaya, “a model of New Amsterdam”, that Peter the Great once tried to create. One can get here by boat as well as by car, the diverse types of construction – from high-rises to low-rise residential houses and villas – creating a vibrant living environment conducive to establishing new social ties. According to Nikita Yavein, this project breaks all of the existing regulations but this is exactly the type of city to live in. In addition, “the real estate possibilities are virtually endless”, but “there is no implementing the idea proposed by Peter the Great without Peter the Great around”. Project for the alluvial territory near Gorskaya Settlement © Studio 44

The reality is represented by the housing project situated on the alluvial waterfront of the Vasilyevsky Island, where the city-approved project of land demarcation and various rules and requirements that the architects were to meet “left no room for planning maneuvers”, while the architects’ work ended up turning into an “endless mathematical hassle”. At the same time, meeting the requirements does not at all guarantee a great result – most of the time, it’s the other way around: for example, the preceding project complied to all the norms and specifications but, instead of a park, the waterfront got a four-lane highway running through it. 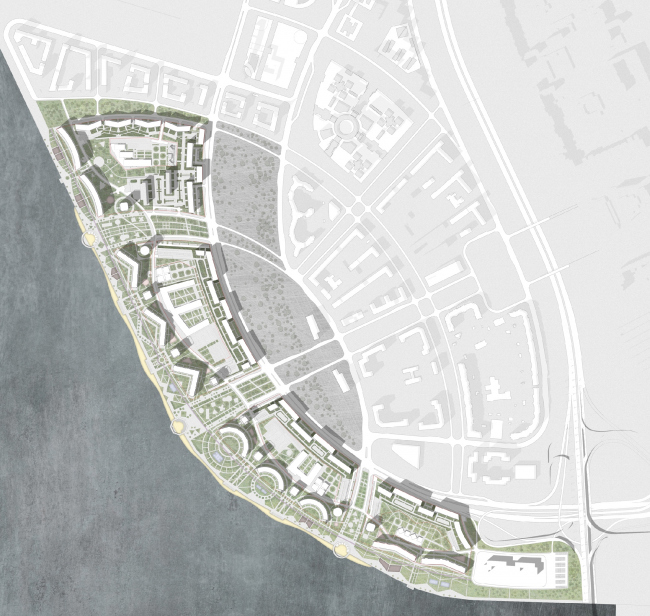 At the conference, Nikita Yavein also showed the project of a “micro district” in the town of Pushkin, located in the Saint Petersburg area, that was inspired by the “coppiced layout” of a regular park – which is essentially a “compromise between normal city blocks and the existing rules and regulations”. At the stand of the Swedish office Semrén & Månsson, the pair “ideal/norm” turned out slightly offensive to this country: the ideal was essentially presented by a housing project in Goteborg, while the norm – by Skandy Klubb, recently built in Saint Petersburg. On the other hand, it’s certainly a relief to know that the principles of Swedish housing architecture have long since become “the norm” in this country: the detailed and diverse façades, the hierarchy of private and public spaces, as well as the multifunctional character of the latter. The owner of the firm, Magnus Monsson, admitted that, although a conflict with the Russian norms did take place, the architects still were able to implement everything that they intended to. Construction norms, he says, are mandatory to comply with, albeit they are by definition doomed to always lag behind the real life. The sketch-board for the "Ideal and Norm" exhibition © Semrén & Månsson. Image courtesy by the "Project Baltia" magazine The sketch-board for the "Ideal and Norm" exhibition © Committee for City Planning and Architecture. Image courtesy by the "Project Baltia" magazine

A little apart stands the stand of the Committee for City Planning and Architecture that displays its achievements: a program of preserving the historical center of the city and reforming its “gray belt”, coordinating the issues of maintaining the architectural image of the new buildings and improving their quality, and a program of integrated development of Saint Petersburg and the Leningrad region. Judging by this project, all one has to do in order to achieve the ideal is to impose the appropriate regulations upon the height of the construction, thus “repairing the omissions in the city’s silhouette”. The theme set by the exhibition was also explored by the guest expert speakers.

The marketing director of LEGENDA Intelligent Development, Vsevolod Glazunov, claimed that we all would get closer to the ideal once the standards of the municipal environment get closer to those of advanced developer companies. What we are getting most of the time is “city turned inside out” – there are plenty of examples of great urban environment but all too often they are inaccessible to city people, being of a resident-only quality. Currently, the developers cannot even begin to design the non-barrier environment because by the beginning of the construction the city cannot do so much as specify the height of the level of the future streets. Helsinki 2000. Part of the presentation of Uusikaupunki for the "Ideal and Norm" exhibition © Uusikaupunki. Image courtesy by the "Project Baltia" magazine

The architect Miia-Liina Tommila, who works for three offices at once: Tommila Architects, Kaleidoscope, and Uusikaupunki, shared about the project of the perfect residential areas of 2100 that her team did in collaboration with futurology scientists for the municipality of Helsinki. What they ultimately got was a utopia that ruled out just about any threat or difficulty – just as the client wanted.

The city of the future consists of flexible “branded” districts: people who now have more free time on their hands, and whose work is not tied to any specific point in space, can now choose the district that best fits their tastes and lifestyle. The central square is covered by a “cloud” bubble of nanoparticles that maintains a healthy climate. All the new buildings are living organisms that exist in symbiosis with their users. They react to environment changes, control the water and power consumption, can independently “grow” a balcony on them should such need arise, and even prompt an elderly person where to find company. The traffic is predominantly vertical, the elderly people move around on hover boards, while reindeer roam the now-unused parking lots. In reality, the Uusikaupunki architects are practicing “design sprints”, i.e. intensive workshops, to which they invite experts and active citizens who are related to the future construction in one way or another. After the discussions, the architects create visualizations, giving shape to the ideas in question. In this process, the ideal is molded by the city people themselves, the architects getting a great chance to “get out of the ivory tower”.

Resonant to these ideas was the presentation by the editor in chief of RBC Saint Petersburg, Elena Krom: a city of common sense must welcome the opinion of active citizens (or the “perfect” citizens, for that matter, like Alexander Karpov), on whose behalf the architects can manage the city. The public opinion forms the demand, and the developers form the offer.

The architect and partner of SA Lab Alina Chereiskaya presented a concept of an adaptive city, in which the architecture is also sensitive to the information inflow. According to the architect, there is no more need to build “for ages to come” – the buildings must learn to quickly react to people’s needs: grow bigger or “shrink” without affecting the landscape, changing their image or even function. Part of the presentation of Knight Frank for the "Ideal and Norm" exhibition © Knight Frank. Image courtesy by the "Project Baltia" magazine

For solving the problem of extensiveness of the modern cities, the General Director of Knight Frank, Nikolai Pashkov, proposed “radical architectural futurism”, as the moderator of the conference Vladimir Frolov termed it: a huge ball with a 1.5 kilometer diameter. It is capable of hosting virtually everything, and it will only have one point of connection with the surface. The director of the ECOM expertise center Alexander Karpov was surprised that all of the speakers presented their version of the perfect city that was all about human beings but none of the projects provided for either waste disposal or any industrial facilities. To him, an eco-friendly city is the one that consumes little resources and occupies little territory. Meaning – compact and so comfortable that people will not want to go beyond its confines and infringe upon nature, which in his project exists independently as a biological shell that supports the existence of the human beings. There was only one speaker who spoke in favor of all the norms and standards unreservedly, and that was the chief architect of Saint-Petersburg, Vladimir Grigoryev: “Ideal and norm are not at odds with each other, when the norm serves as the basis – skillful hands will turn anything into ideal”

A separate part of the exposition displays the best land improvement projects prepared for the competition of young architects named “North Valley – the Future of the Vyborg District”, organized by the magazine “Project Baltia” and the company “Glavstroy SPB”.