​House above the Trees

The world’s one and only private residence designed by Zaha Hadid was recently finished in the Moscow area town of Barvikha. 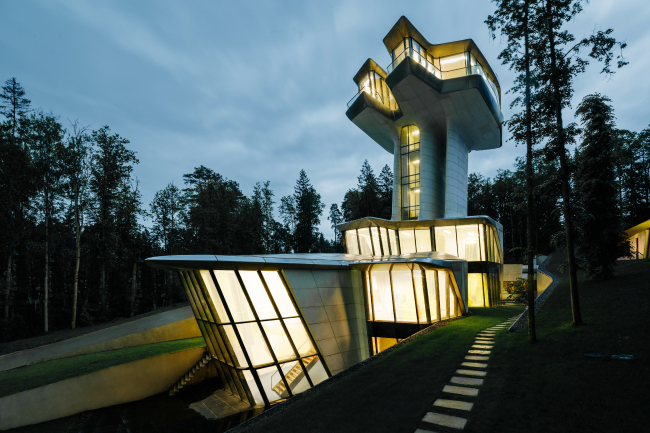 The Moscow area recently saw the completion of the construction of the world’s only private residence built upon project by Zaha Hadid. The villa, which stands in a forest but still within the boundaries of the town of Barvikha, not far away from the Rublevo-Uspenskoe Highway, belongs to property magnate Vladislav Doronin, chief executive and owner of Capital Group and OKO Group.

More than ten years ago, Vladislav Doronin and Zaha Hadid met at a social function in London, after which they made an agreement about designing this house.


Vladislav Doronin: “For me, she is an architect of different league. I met Zaha Hadid a decade ago in London. We discussed architecture, art, and we found mutual interest – she liked Russian avant-garde, and I collect Russian avant-garde.  She was very laconic but very witty, her remarks being always to the point. She was an intelligent, sometimes sarcastic, and very insightful person. It turned out that both of us were perfectionists with a keen attention to detail, and we had a perfect understanding. Describing my future house I said that I wanted to wake up in the mornings and see the blue sky, feel free, and not see any neighbors. And Zaha replied: “But then you do realize that you will have to live above the trees, don’t you?” After which she took a napkin and made a quick sketch. I liked it. This is how we started Capital Hill, and it came out exactly the way Zaha intended it to be. This is not just a beautiful building/sculpture but also a comfortable place to live in”.

As for Zaha Hadid, she would call Vladislav Doronin “Russian James Bond”, who had style, taste, and the power to create something special. One could think that the silhouette of the villa is a reference to the “horizontal skyscrapers” of El Lisitsky, discussing whose creations generated the idea of collaboration between the client and the architect. Designed by Zaha Hadid, however, the whole house takes on characteristic qualities of a space shuttle that has just landed among the birches and pine trees or maybe a family of some peculiar mushrooms feeding on the roots of the trees. Zaha’s trademark combination of movement, organic architecture, and futurism is probably one of the last “signature” works of the architect who passed away two years ago. The two main volumes of the residence – “ground” and the “hovering” parts – are connected by three streamlined columns.

The rooms of the bottom part are partially inbuilt into the hill. The deepest of all are situated the rooms for recreation and leisure activities, the next floor contains a living room, a kitchen, and an open air swimming pool, while on the ground level there is a grand entrance, a library, a guest room and the children’s bedrooms. The slanted glass façades of the first three floors are turned in the direction of the forest; above them overhang curvilinear roofs with ledges of varying width.

The master’s bedroom with a spacious terrace hovers over the treetops at a height of 22 meters. In the shaft between the two concrete columns, there is an elevator and a staircase, which also command the surrounding views. The building was designed in 2006, its total floor space being 2650 square meters. According to the architect and her client, the Capital Hill Residence, situated in the Barvikha forest outside Moscow, is utterly unlike anything else outside a film.

Capital Hill Residence is the second Zaha Hadid’s project that has been implemented in Russia. Her other project, the Dominion Tower business center, was completed in 2015.
Text by: Zaha Hadid,
Translated by Anton Mizonov