Can one express in architecture the connection between Bauhaus School and its professor Vasily Kandinsky? Working on a housing project with maximum values of density, depth, and height, UNK Project made such an attempt, arranging in a freehand manner several 12-story slabs in three dimensions of a waterfront area. 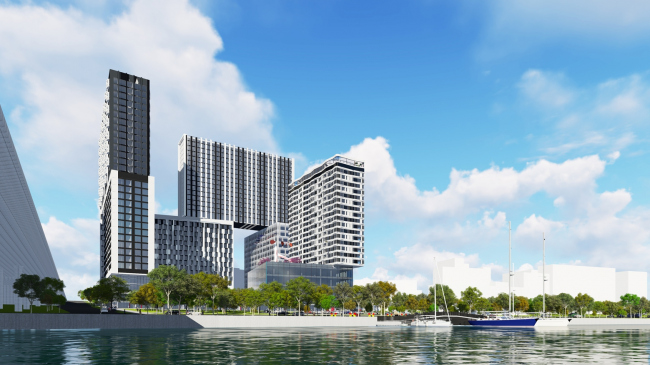 Thanks to the proximity of the Moscow City business center and the active construction going on all around, the area, in which “Kandinsky Bauhaus” is being designed, got a name of “Big City”. Across the river, the grand-scale “Fili-Grand” is being built; another residential complex named “Serdtse Stolitsy” (“Heart of the Capital”) joins the land site in question from the west; on the rear side of the site, there is an office center and a school – in accordance with the agreement between the developer and the municipality, the latter will also be expanded. And, finally, the territory lying to the right was overbuilt in the 1980’s with prefabricated houses (which are not to be torn down just yet), and then the giant high-rises of the Moscow City overlooking the site from afar. The proximity of the river, of course, adds to the attractiveness of the site – jumping ahead of our story, we will reveal at once the fact that the complex will get a fragment of a landscaped embankment of its own. However, the task was far from simple from the town planning standpoint. Along the west border of the site, a busy road junction is scheduled to be built – it will become the dividing line between “Heart of the Capital” and “Kandinsky”. The plans for the construction of the road junction considerably decreased the area of the possible construction. In addition, the municipal construction regulations limit the construction height here down to a hundred meters, combined with the client’s height expectations in terms of the yield of the useful floor space of the project. All of this made the project rather complex – prior to UNK Project, several architectural teams worked upon it, but not a single concept made it to the implementation stage.

Thus, the challenge was quite serious: the architects had to find a solution that would be at the same time artistically expressive and functionally and economically grounded, which meant the necessity for designing a high-density kind of construction that would be nevertheless valuable in terms of the living environment. According to the specifications, the development density, including the part of the territory allotted for the road junction, was to be 54800 square meters of useful floor space per hectare – not counting the “cutaway” western part, this figure rose to 70000 square meters, which corresponds to the scale of New York or Singapore. Modeling the traditional formats of territory organization showed that both city block and “micro-district” (soviet term) types of planning yield poor insolation figures for the apartments whose windows are turned inside the block: dark yards, strong draughts, and still insufficient yield of useful floor space. The architects had to refrain from both options. Ultimately, they found a solution as smart as it was unconventional, which allowed them to exclude all the limitations of the first two and create an unusual architectural image. “Although the city block type of construction could basically meet most of the investor’s expectations, the “water-well” yard, closed on all sides, a large number of apartments with bleak views from the windows, and the inevitable appearance of draughts in the spaces between the houses forced us to continue our search for an alternative solution – says Julius Borisov, head of UNK Project – As a result, we came up with this idea of “superblocks”. Their prototype was the 12-story prefabricated houses that you can see on the right of the complex. Putting the blocks together in an asymmetrical fashion, practically scattering them around like toy blocks, we came up with a composition of six vertical volumes, laying yet another horizontally, and placing them all on a single podium”.

The solution that the architects found allowed them to open the yard to the river, endowing practically every apartment with great sightseeing properties, and, most importantly, the 25 stories, when divided into two parts, look like double 12, which creates an effect of a human-proportionate environment. The arrangement of the blocks rules out the possibility of draughts as well – even in the large windswept arches the wind speed does not exceed the “comfortable” figures. 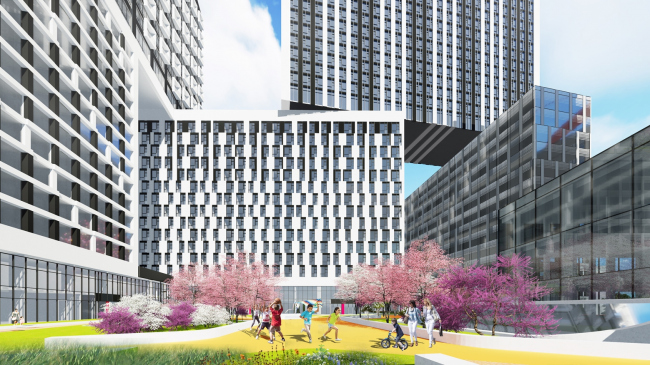 The space structure, created in this way, refers us, according to Julius Borisov, to the aesthetics of Bauhaus that is based on simple pure forms and the agile abstract paintings by Vasily Kandinsky. At the same time, some certain innuendo and even “destructiveness” of the architectural language of “Kandinsky Bauhaus” and the transparency of its structure, which builds up a dialogue with the context formed in this part of the city by the architecture of the new buildings and the white slabs of the residential houses of the 1980’s – refer us to the Japanese metabolism with all of its modular, cellular and agile features. The most vivid proof of this statement is, for example, the Hotel Sofitel Tokyo by Kiyonori Kikutake, Fuji Television by Kenzō Tange, and Nakagin Capsule Tower by Kisho Kurokawa. At the same time, UNK project was able to develop the metabolism ideas, creating a volumetric and slightly ironic composition connecting Moscow’s architectural past and present.

The idea of the present and the past is also supported by the façade design solutions. At the same time, the façades of the blocks as such are different. One echoes the ascetic style of Sergey Tchoban that we can see in the “Heart of the Capital”, the other is but slightly resonant with the nearby prefab houses. The others are visually richer, flashier, and more complex – they contrast with the former two. The difference between the façade design solutions in different blocks is reminiscent of what Sergey Skuratov did in “Sadovye Kvartaly”, distributing the tasks of designing individual houses to different architectural firms, getting the recently-popular “multi-façade” quality. What makes this case different is probably the fact that the façades for “Kandinsky Bauhaus” were designed by the architects of one firm, the façade materials being fiber cement and glass. Such kind of architecture does not ask to be adorned – even without an expensive wraparound it makes a powerful statement.

According to Julius Borisov, the idea was that the “block” houses were supposed to be arranged in such a way that for a casual observer it would look as if there’s no order or logic in their array whatsoever. In order to achieve this effect, even the undercuts do not fall in with the architectural laws, looking as if they were made by a child. In actuality, of course, nothing was left to chance here; this technique interprets the commonly known principle of variable integrity of a traditional city that consists of buildings erected in different times but still united by a common approach and similar materials. In “Kandinsky Bauhaus”, the axes are shifted off-center, the blocks are picturesquely scattered around, but still, their inner similarity, just like the “chaotic” character of the overall composition, become the basis of the end result’s integrity. The plaque on the left side of the site serves as the noise screen for the future road junction. On the right, there is a VIP-block standing on a horizontal office volume. The roof of the latter serves as yet another, private, yard for the VIP-residents and guests. Beneath the pull-out roof of this same block, there is also a private area with a swimming pool, just like in the best homes of the already-mentioned New York or Singapore. On the inside, the residential blocks are designed in a quite a traditional way – some of them are sectional, others have elongated corridors. The yard turned out to be not very large but it is still very cozy; it gives access to the park and the river. 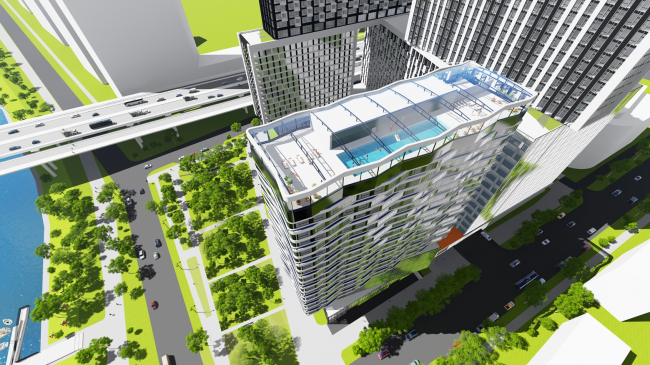 The project also turned out to be a complex one when it came to the engineering solutions – large spans, height differences, and, as a result, challenging tasks for organizing parking lots and street retail which is placed along the perimeter of the common podium, along with the local businesses. The podium also be includes a large fitness center that includes a 25-meter swimming pool.

In addition, the project is unique in its sheer parameters: its height is 111 meters, the allowable maximum on this site; beneath the buildings, there are five levels of underground parking space, which required a digging-in of more than 15 meters.

The client of “Kandinsky Bauhaus” is only just beginning to operate on Moscow’s housing construction market, and, in order to achieve successful sales, he was ready to experiment. Well, as a result of this particular experiment, the nation’s capital can get a new housing project with an unusual structure of space organization, which dynamically interprets its silhouette – growing ever upwards.