In Ekaterinburg, the Dutch firm LEVS architecten has designed a housing complex named “Forum-City” that is meant to turn the wasteland (which remained after the building of the Central Market was torn down) into one of the city’s landmarks. For a decade, the location in the center of Ekaterinburg where the new housing complex Forum-City is to appear has been a wasteland. Before that, the quadrant formed by the crossing of Sacco-i-Vanzetti, Radishcheva, and Sheinkmana streets hosted the central market: it opened in the middle of the last century, and, as time went by, gradually turned into a haphazard mass of little stores and kiosks. These were done away with in 2007 – but, together with them, the historical central pavilion with columns was inadvertently torn down as well – and the land site was cleared completely. Initially, they were planning to build here a skyscraper residential complex “in the spirit of Chicago of the 1930’s” – but these plans were thwarted by the financial crisis.

The wasteland, which by now has overgrown with trees, is surrounded by new buildings. Most city people consider these buildings to be elite housing but calling them expressive-looking would be a serious stretch: most of them are sectional high-rises with monotonous façades. Not far away stands Ekaterinburg’s second-tallest (after the “Iset” tower) skyscraper named “Vysotsky” (188 m). The construction of Forum-City starts in September. The authors of the concept are the Amsterdam-based firm LEVS architecten. The Dutch architects designed a housing complex of a city block type, the planning grid being the kind characteristic of Ekaterinburg. 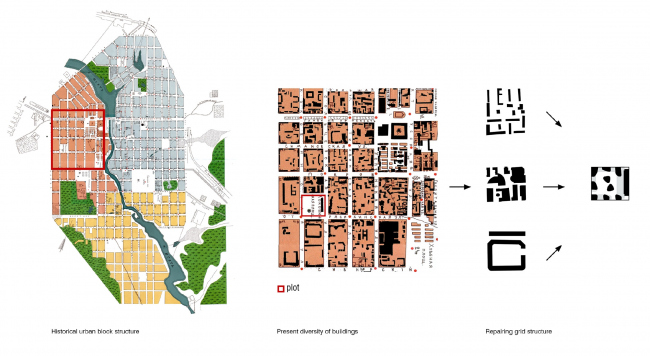 Forum-City is essentially a 10.3-hectare city block formed by nine towers from eight to thirty stories high: seven of them form the perimeter and two stand in the middle. The demolished marketplace was oriented west; its main pavilion was standing on the Sheinkmana Street. Unlike its predecessor, Forum-City is oriented west, where, on the Sacco-i-Vanzetti Street, there is a recently-built two-floor shopping center. It will occupy the main part of the east flank of the block, and it will also get a glass pavilion built up against it along its entire west façade. At the corner of Sacco-i-Vanzetti and Radishcheva streets, there will be something like a small plaza: the architects will place there the entrance to the above-mentioned pavilion, enshrouding this space in a semicircle; the existing tram stop will remain, while the first floor of the adjacent tower will step back from the construction red line forming a marquee resting on a V-shaped support. The city block is designed as being completely vehicle-free. The towers are united by a common podium (part of which constitutes the above-described pavilion); the podium has two levels in it, just like the already existing shopping center – with entrances from the yard on the side of the busy Radishcheva Street, the quiet “Central Market” alley (yes, the building is gone but the namesake alley is still there), and the Sheinkmana Street, which leads to the city’s main axis, the Lenina Avenue.

On the roof of the podium, along its entire perimeter, the architects are planning to plant grass and trees so as to make the block more open to the city and save it from looking like an impregnable fortress. The towers that flank the complex will sport green terraces. Next to the tallest tower – it stands in the northwest corner of the site, at the crossing of the Sheinkmana Street and the “Central Market” alley – there will be two terraces designed at approximately the same height marks as the two neighboring roofs. All the roofs of the block will be usable, with trees, lawns, and gazebos. Along the outer perimeter of the block, the towers’ façade surfaces are rectangular, while the parts that are turned inside look as if they were cut away on a curve gauge, and have a smooth curvilinear profile. On the plan, the two buildings that stand in the yard look like triangles with rounded angles. The outside façades of the tallest towers that overlook the “Central Market” alley are rectangular up to the level of about the tenth floor: higher up, they become curvilinear. The terraces are situated at the joint of the two forms. 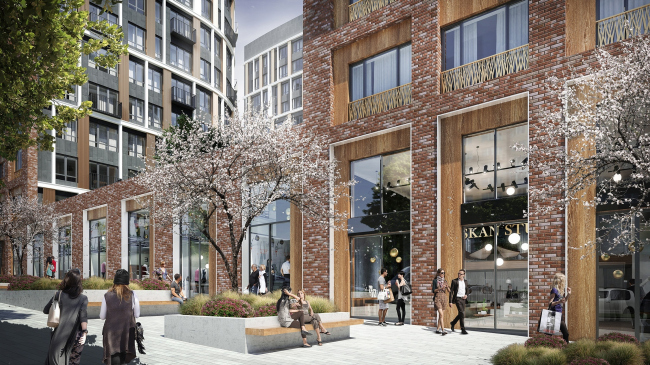 The “city” and the “yard” façades are also entirely different in their rhythm and materials used. The rectangular part of the block, including the podium, is covered with motley terra cotta and white brickwork. On the pedestrians’ line of vision, there will be large window shops, encased in wooden frames. The brick solution of the façades is also a hint at a “postcard from Amsterdam”, where the HQ of Levs Architecten is situated, but it also reminds of the brickwork style that was widely spread here at the brink of the XIX-XX centuries – many city residences and, more importantly, many industry facilities of Ekaterinburg and other Russian cities were built in this style. The streamlined parts of the façades are made from modern building materials; they look lighter and more agile. This creates a seemingly chaotic impression of alternation of wooden lath inserts that project beyond the surface of the railings and the gray panels of the main coverage. Height-wise, the towers are scaled down by horizontal belts of white curbs. On some buildings they will come in two-floor increments, and on some buildings – after each floor. This way, from the yard side, each building will have an image of its own, which at the same time will fit in with the style of the entire block. The land site has a significant height difference – it sinks eight meters from west to east. In the central part of the block the height difference is about four meters. Thanks to this, the inside yard will become a two-level one: from the side of the Sacco-i-Vanzetti Street, coming through the pavilion, the residents will enter the lower part of the yard, while, coming from the Sheinkmana and Radishcheva streets – into the upper part. These two will be connected by a staircase. Part of the lower yard will be covered with a roof with skylights and fountains. It will become the zone of shops, cafes, and restaurants, expectedly open to general public. The upper yard, on the other hand, will be private, accessible only to the residents, with landscaping elements whose curvilinear contours will echo those of the towers: pedestrian trails, pavements, lawns, flowerbeds, and a children’s playground. 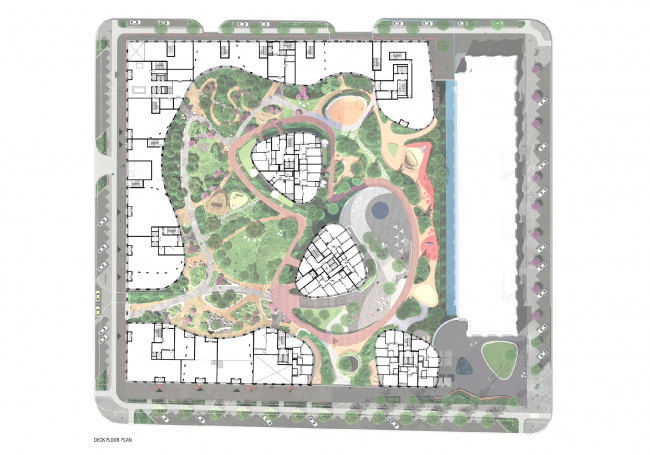 Paying homage to the genius loci of the place, the architects decided to organize a modern farmers market on the territory of the block, while the top floor of the hundred-meter tower will host a bar with a panoramic view of the city.

In their Forum-City project, the architects were able to find the perfect balance: the dense plan fits in neatly with the existing city fabric, repeating the planning pattern typical of Ekaterinburg. This housing complex will look bright yet at the same time tactful, at the same time restoring the historical function – which was lost after the demolition of the Central Market – in a modern interpretation. Text by:
Translated by Anton Mizonov