The second stage of the Urban Farm at VDNKH gave the local landscape and architectural ensemble several buildings that demonstrate an interesting associative approach to creating thematic pavilions.

The project of the farm, about the first stage of which we already wrote, appeared thanks to the desire of the VDNKH management to bring back to life one of the derelict corners in the northeast of the exhibition park territory. Formerly, this was the place that predominantly consisted of venues demonstrating the achievements of the Soviet agricultural industry. In addition to the pavilions with self-explanatory names of “Pig Breeding”, “Sheep Breeding” and “Poultry Farming”, next to the cascade of creeks there was an exposition dedicated to hunting and fur farming. The latter did not survive the transition period from VDNKH to All-Russia Exhibition Center and back to VDNKH again. The whole territory fell into decay.

However, the surviving genius loci prompted the architects of Wowhaus to embark on a rather courageous experiment. They decided to create an educational venue where children and their parents could get acquainted with the wildlife, as well as master various skills related to subsistence farming. This is not a copy-paste from the western urban farms but a whole new original concept that combines family outdoor recreation, a mini-zoo, a club of young naturalists, and craft shops.

For this unconventional idea, the management of VDNKH allotted a land site with a total area of about 3 hectares. A significant height difference divided the territory into two unequal parts: the lower larger one with a creek, and the upper one stretching along the slope. The first one https://archi.ru/en/64821/razmyshleniya-na-gorodskoi-ferme with a cowshed, a poultry-house, fruit and vegetable garden, and a children’s playground was finished very quickly and was opened in 2015, becoming an almost instant success.

The construction of the second part, which included building a few new pavilions meant for year-round studies of crafts and agricultural activities, was postponed until the next 2016.

Because of the specifics of the terrain, construction was only possible on a narrow strip of land running along the edge of a slope, and on a wide land site that used to be occupied by the “Hunting and Fur Farming” pavilion – now this place was to function as the grand entrance hall. Here the guests of the farm are welcomed by the entrance group with ticket offices and an info desk that embraces in a broad semicircle a square with flower beds and two surviving statues of “Hunter” and “Fox Nursery”. Inside the territory, literally two steps away from the entrance, in order to prevent any possible complaints about the underdeveloped service infrastructure, the architects placed a farmers’ cafe that will also host a cooking class for children. Further on, the pedestrian route runs parallel to the slope of the hill. Alongside the trail stand two pavilions, one after another. The first one contains various craft shops: pottery, joinery, and others, while the other contains greenhouses. In the second stage, the trail makes a smooth bend and leads the visitors over the bridge above the canal and to the main square of the first stage with a cowshed and a bird creek. The master plan of the farm took into account the results of the social and economic survey conducted by KB23 – the possible features of the future farm and the set of buildings necessary for their realization were defined collaboratively. The project was developed by nine architects, all of them working within the framework of a single design code.

The chief architect of the second stage, Anastasia Izmakova describes the task set by the company before the project team on the following way: “We were to design pavilions in the spirit of the whole VDNKH in general, with literary associations and even symbolism”.

The entrance group that now meets the guests almost exactly traces the outlines of the semicircular colonnade with wooden girders instead of columns (something that was widely spread still in the classic Russian manor architecture tradition) – one could not think of a more direct reference to the spirit of the former VDNKH.

The next object along the path – a spacious cafe, stylish and laconic – is probably inspired by the Scandinavian architecture. The cafe is notable for the elegance of working with the wood in a combination with glass that is characteristic of Wowhaus.

The complex of craft shops is one of the most impressive structures in the ensemble of the Urban Farm – first of the unusual parabolic shape of the roofs of three large sections. “The first thing that I imagined was a huge hangar of metal corrugated sheets – shares the author of the craft workshops project, Anastasia Izmakova – And I tried to come up with structures that would sort of call up this image in one’s mind, at the same time creating a totally different atmosphere”. The solution was in the form of bent wooden arches, on top of which a roof of larch lath was laid. Also – arguably, for the first time in local architecture – the architects of Wowhaus used the burn-based wood protection technology. This is not only an interesting decorative design solution widely used in the traditional Japanese architecture, but one that has a number of practical benefits: it keeps the wood moisture-fungus-proofed, and provides for low heat conductivity.

The maximum height of the parabola of each craft shop section is more than 6 meters, and the architects endowed two sections out of three with lofts in order to increase the useful floor space. One section was left devoid of such intermediate floor, and, being inside of it, one can fully appreciate the dynamic beauty of the ribs of glued wood with their almost-Gothic strained lightness.

The next pavilion – the greenhouse – is in fact a chain of several blocks meant for different types of indoor cultivation of plants: one has in it racks for hydroponic growing of greens and vegetables, the other has flowers growing in the soil, the third has exotic plants growing in tubs; the pavilion is covered with a translucent pitched roof from cell polycarbonate. The side façades of the blocks are decorated with sophisticated intertwining stained glass patterns. The vertical and slanting imposts form a pattern that reminds a spike or even a pineapple.

The experiment of VDNKH management and the creative search of the Wowhaus architects ended up being a doubtless success. The farm is growing ever more popular. The idea and its realization are so much about love of nature, wildlife, and people that it is even surprising that it could get implemented in our pragmatic time of give and take. In addition to all other things, the project of the Urban Farm at VDNKH once again proved the status of Wowhaus as number one explorer of new formats for recreational spaces.
Text by: Oleg Shapiro, Dmitry Likin, Elena Petukhova
Translated by Anton Mizonov 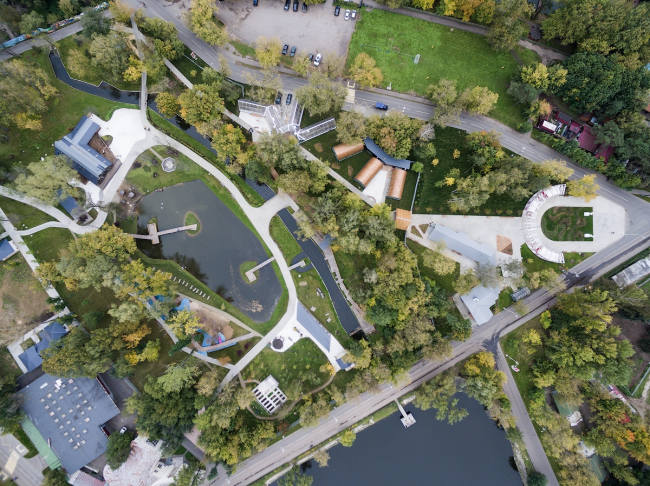 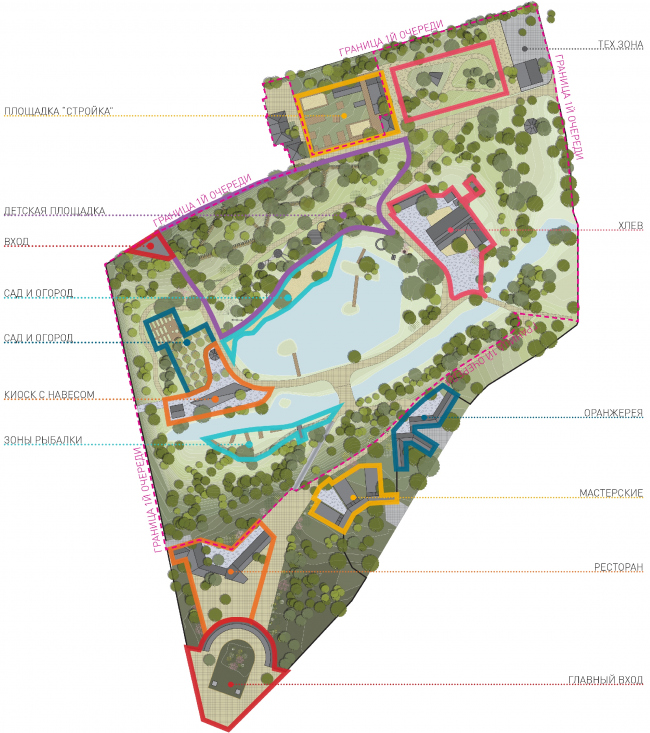 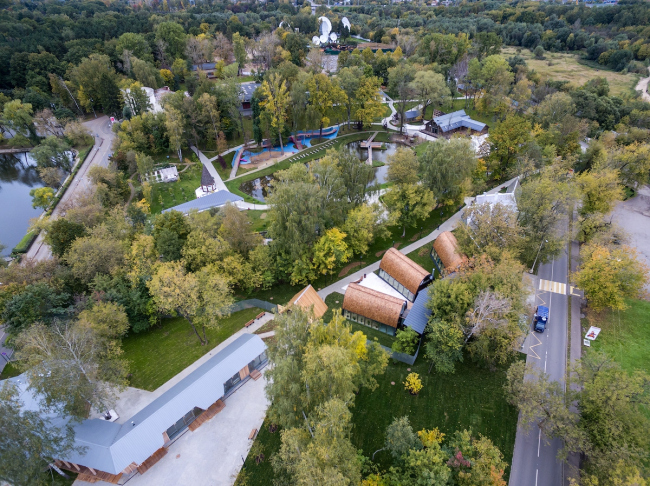 "Hunter" sculpture next to the enrance pavilion at the Urban farm at VDNKH, 2nd stage. Wowhouse. Photograph © Mitya Chebanenko 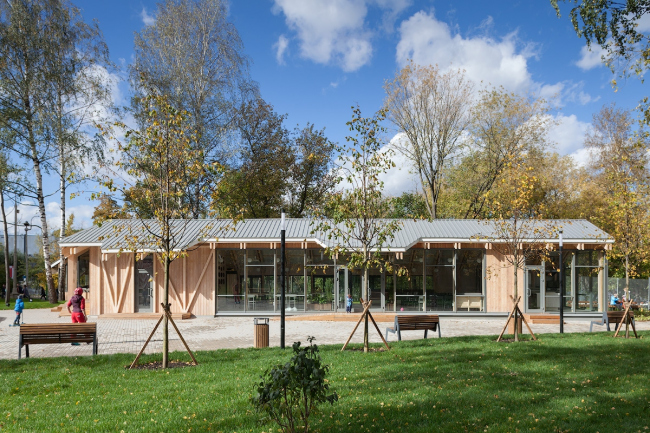 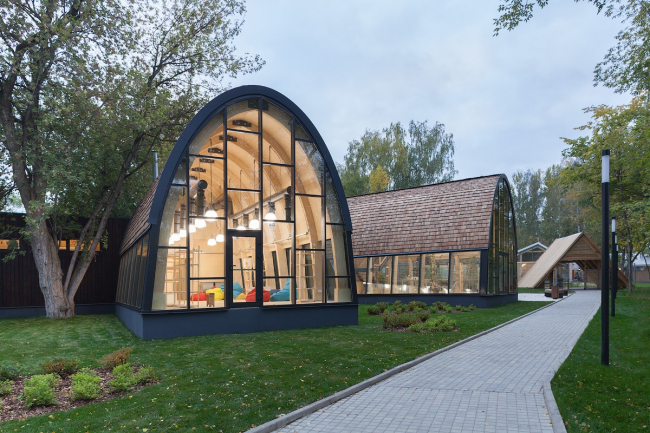 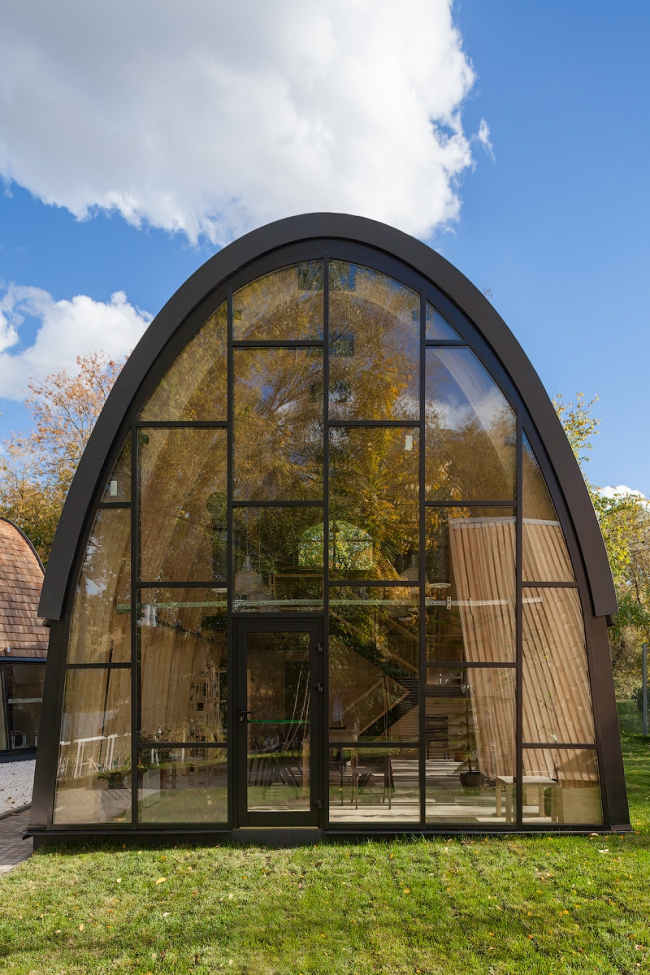 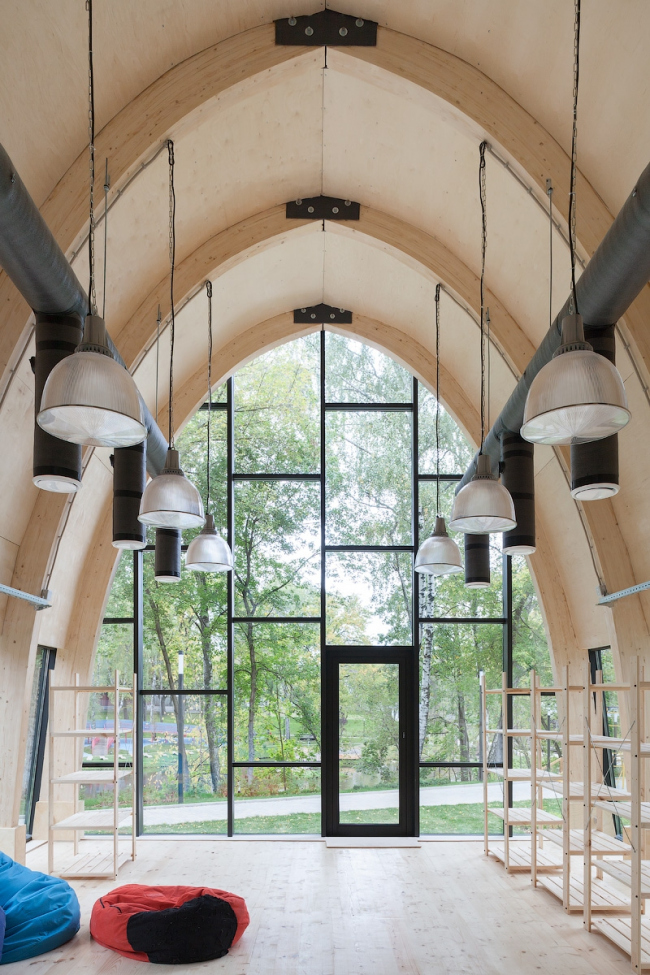 Interior of one of the blocks of the craft shops pavilion. Urban farm at VDNKH, 2nd stage. Wowhouse. Photograph © Mitya Chebanenko 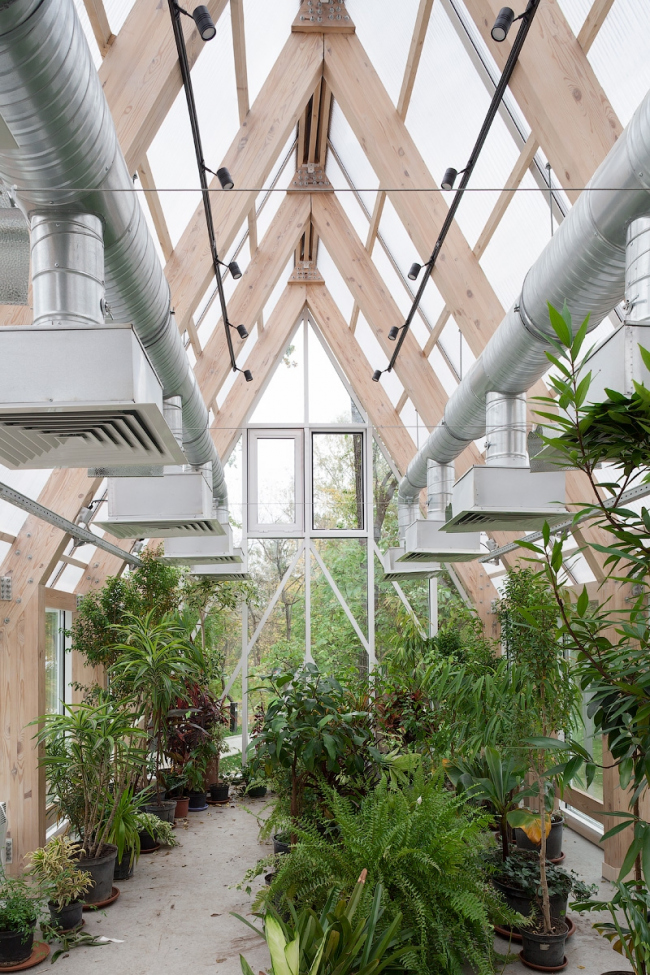 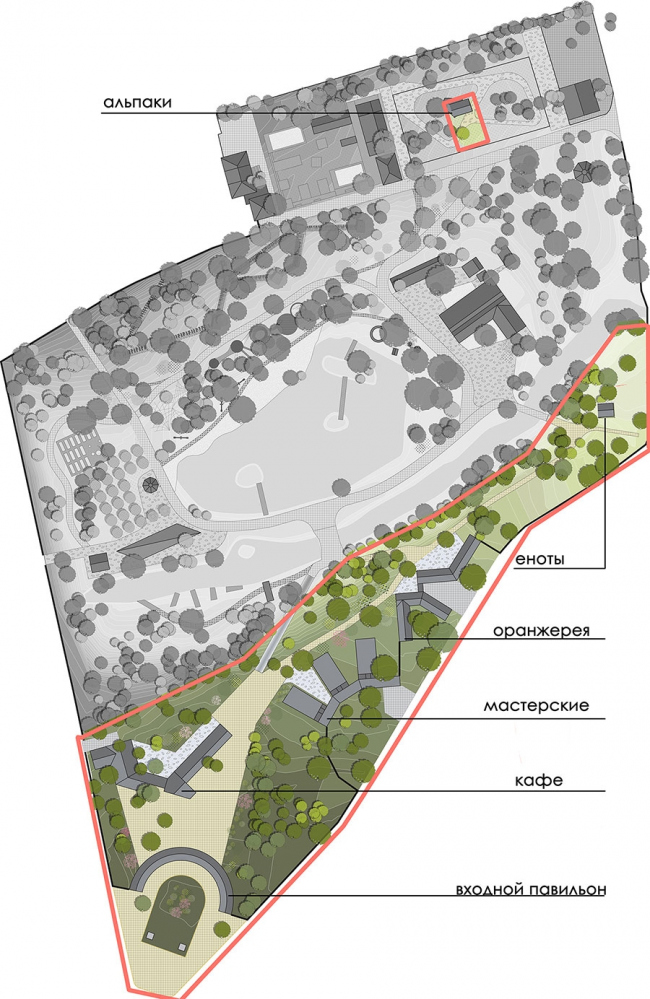