The visitors of the park of Moscow North Riverside Terminal, whose renovation project was developed by Kleinewelt Architekten and Citizenstudio, will get an opportunity to take a trip both in time and space.

It all began when Kleinewelt Architekten invited Citizenstudio to work together on the project. The main idea came about easily and quickly – as soon as the partners got together for their first meeting. However, as is often the case, this seeming simplicity was grounded in serious preparation work and historical, geographical, and sociological surveys performed together with subject experts. In this case, it was particularly important: Moscow North Riverside Terminal is a place that is truly unique in many respects.

The building of the terminal with a park surrounding it was built in the 1930’s and was celebrating the opening of the Moscow Canal, at the inauguration of which Moscow was for the first time in history called the “port of five seas”, the proud name sticking thereafter. The large park was planned in accordance with the standards of a regular French garden: with a grand parterre, parallel and perpendicular walls, sculptures and fountains. The building of the terminal – which is recognized as one of the outstanding examples of the “Stalin empire style” – and the surrounding park are state-protected as monuments of architecture and garden art, which, nevertheless, did not stop them from falling by degrees into decay.

The restoration work was based on the original project by the landscape architect Timofey Shafransky that was discovered in the archives. “This is the first layer of reconstruction – says the partner of Kleinewelt Architekten, Sergey Pereslegin – We’ve been restoring fragments of the park the way they were when they were first created, discussing our every move with restoration experts”. However, in addition to this layer of restoration, the architects propose to endow the park with quite a new scenario that does not either negate the historical legacy or try to upstage it but augments it, giving the whole narrative some extra volume. The architects paid attention to the fact that what turns Moscow into a “port of five seas” is a system of rivers and channels, thanks to which a vessel, starting from the Khimkinskoe Reservoir, can in fact reach five seas, Baltic, White, Azov, Black, and Caspian. What they decided to do was take the map of these waterways and superimpose it upon the regular layout of the park, thus creating a new pedestrian route. Technically, this looks like a boardwalk raised 30 centimeters above the ground and not violating the system of the regular pedestrian trains in any way. Involuntarily, an association came to mind with a soviet popular song of the 1970’s called “Farewell to Steamboats”: “... Slow waves of the sea are nothing like a railroad track”. “This is how we phrased it for ourselves – explains the partner of Citizenstudio, Mikhail Beilin – The austere regular layout of the park with its parallel alleys is meant not for a walk – but for a travel. And traveling by sea is all about smooth motion; our route gives a person an opportunity to take a slow walk, like at a seaside resort, see things from a whole different perspective, and discover new landscape images". In order to accentuate their idea, the authors of the project propose to plant along the boardwalk perennial plants with blue and golden flowers that would create an image of spikes and water plants – unlike the festive variety of colors in the spirit of 1930’s that reigns on the flower beds of the regular park.

The cafés and kiosks standing along the route, as well as gazebos and belvederes got the names of the real Russian cities; they are situated exactly in their geographic locations, and, also notably, the arcade of the summer exhibition pavilion traces exactly the flow of the Vychegda River. 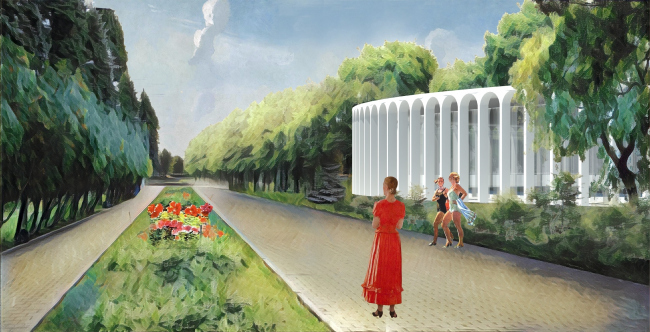 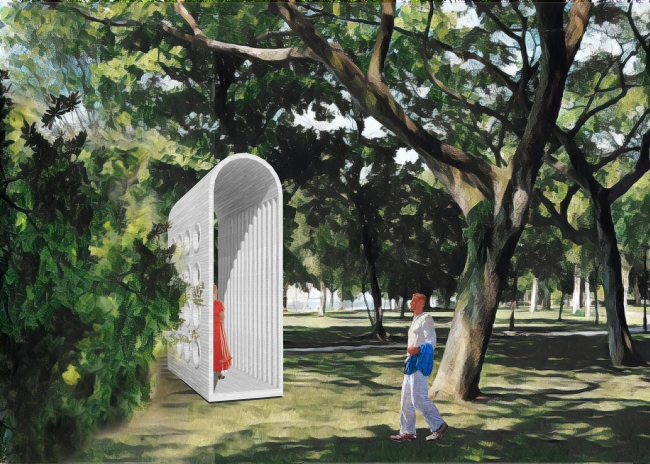 In the system of “growth rings” of the future park, the 1930’s are immediately followed by the “thaw” of the 1950’s. The next stage of park architecture that the authors of the project paid homage to is the modernism of the 1970’s, which rules, among other things, the design of the restaurant commanding fine views of the lake. The restaurant bears the proud name of “Volga”, and of course, it is situated in the appropriate place of the walking route. This will be a completely transparent building with a terminally laconic plan and a possibility of multifunctional use thanks to pull-out partitions. 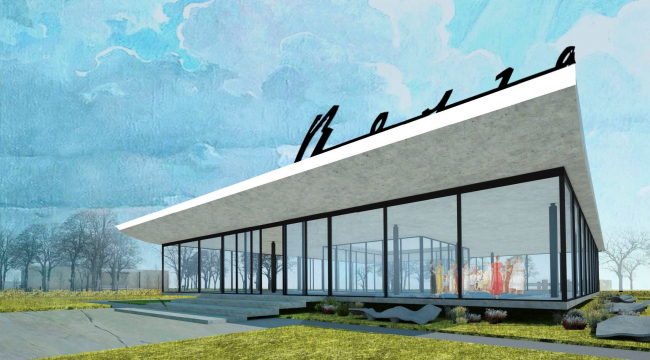 The main starting point that the architects based themselves upon when designing new objects was the very name of the terminal – “Moscow” on the map of rivers and channels – and a few surviving waterfront buildings designed in the shape of ship fragments. Following the postmodernist tradition, the architects used the archetypes that constitute the identity of the main building, practically dividing it into separate parts: the colonnade of the terminal's galleries got scattered around the park in snow-white arches of major and minor gazebos, the medallions that adorn its façades got reflected in the end-to-end openings in the pavilions' walls, and the stylized ship decks, masts, and chimneys also seem to have started a life of their own. One can easily see the reference to the tall arches of the central portals in the two-story belvederes, upon which the authors of “Park of Five Seas” are laying special functions: these are meant not only to provide the park visitors with fine views of the lake otherwise obscured by trees but also become visual centerpieces for the viewers “from the other side”: namely, from the opposite shore of the lake and from the sailing ships. As for the sports nucleus of the park (it was designed still in the project of 1933 but it never was implemented), the architects surrounded it with an impressive-looking snow-white arcade, in which one will have a hard time recognizing a trivial hockey rink. And, of course, the biggest room for imagination was opened in the process of designing children’s playground, where every object, from slide to sandbox, will represent an individual “ship” with decks, masts, rope ladders, and other joys for the little sailors.


The authors of the project are really into the idea of “urban micro-tourism” that suggests that the map of the nation’s capital will get a rather large amount of attractive public spaces – each one with a unique atmosphere and emotional content of its own so that Muscovites could take these little trips within the limits of their home city. If everything works out as planned, the Park of Five Seas with its unique geography and thought-out scenarios will doubtlessly become one of the most attractive spots on this map.