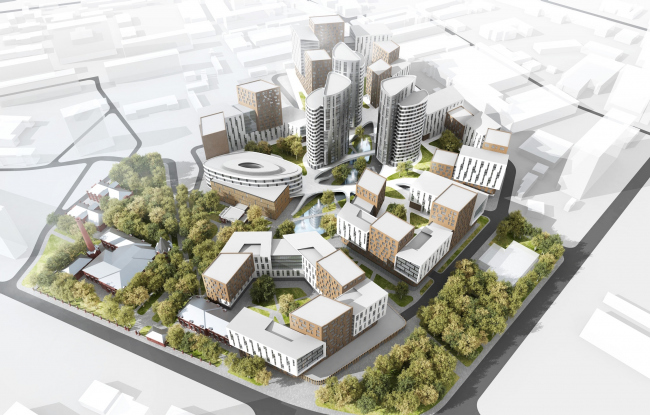 The quiet area north of the Krestovsky Flyover Crossing between the Mira Avenue and the Sokolniki Park is rapidly developing as a platform for housing projects. It is situated in the immediate vicinity of the Sokolniki and VDNKh parks, there are metro stations nearby, and the sufficient social infrastructure is already there. Currently, several high-rise housing projects are being built here, one of which will be the “Silver Fountain” residential complex that will occupy the territory of the former “Vodopribor” plant. Currently, the territory of the plant contains the surviving repair shops of the Alekseevskaya pumping station of the XIX century and a few Soviet-era additions. In 2015, some of the old structures (the reservoir, the water tower, the caretaker’s house, the office, and the fence) got a status of cultural heritage monuments, and these will be kept intact as the remains of the Mytishchi-Moscow water supply line, laid down at the order of Catherine the Great and having stayed operational until the whopping 1960’s. The protected buildings are situated in the northeast corner of the 8-hectare land site, this circumstance predetermining the composition of the complex that consists of six blocks: a historical and five newly-built ones, the number of floors gradually growing from 6 to 22. The blocks are formed by buildings of a U-shaped plan that open up towards the public territory in the center of the complex. The buildings consist of evenly alternating volumes: respectable brick and avant-garde white ones. At some places, the contrasting parts grow into one another like pieces of a 3-D jigsaw puzzle, accentuating the unity of the structure. The alternation of red brickwork and white panels echoes the style of the historical buildings. Plan of the Alekseevskaya pumping station. Taken from I.Verner "Today's Economy of Moscow", 1913 Buildings of the pumping station, the current state © Atrium Buildings of the pumping station, the current state © Atrium

The master plan was developed with a consideration for the modern principles of creating a comfortable urban environment: the housing is dissected into blocks that create private yards; the bottom floors contain public functions; the architects provided for the pedestrian “transparency” of the entire area, the complex is totally vehicle-free; the territory is also organized on various levels including the height difference and the clear functional zoning separating the pedestrian and automobile flows. Instead of monotonous orthogonal grids, the architects created an urban environment that is unique both visually and functionally, an environment that mixes history and the stylistic solutions of today. The plan of the complex utilizes the specifics of the terrain. Thanks to the height difference of 4.8 meters from north to south, the south part of the complex conceals a two-level underground parking garage. In the northern part, there is only one underground level. In the center of the complex, there is a park with a creek and fountains – as if a reminder of the “water” past of the Alekseevskaya pumping station, next to which tower three original high-rises, different from the perimeter buildings. Raised on three-story high aluminum pillars above the glass lobbies, their white-silver volumes consist of two parts: the lower 19-story high, dissected by horizontal stripes of the fenestration, and the higher 22-story high with vertical stained glass windows uniting the floors in pairs. The towers look very much like jets of water springing from underground, embodying the image of the “Silver Fountain” that gave the name to the residential complex. The architects make the most of the double-level space in the center of the territory. The second level has block yards upon it, between which bridges are thrown that form the communication network that connects the park, the creeks, the residential buildings, and the towers. The architects also make the most of the vicinity of the historical and modern buildings. For example, the protected lobby of the water reservoir is turned into an imposing portal of a low-rise office building with transparent façades made of glass and wooden lamellae. On the other side of the portal starts a lime-tree promenade that leads to the Novoalekseevskaya Street. The project successfully solves a most complex task of marrying a grand-scale housing project and monuments of architecture with maximum attention to the needs of both. The territory is thoroughly organized and structured; there is a coherent ensemble that sports a bright and memorable image. 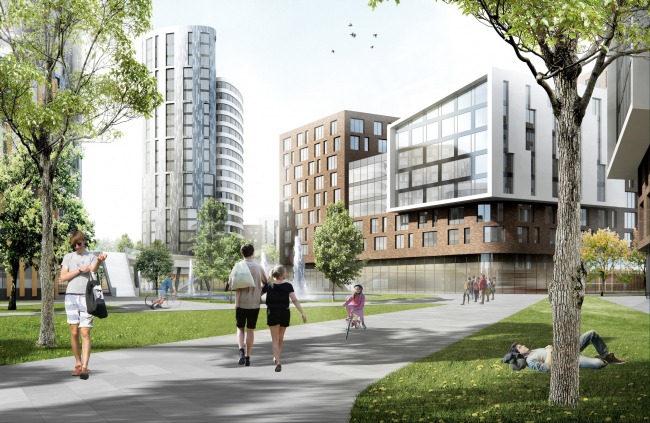