Architecture for the Young

Built upon a project by Anatoly Stolyarchuk, a new youth hobby center opened in September in Saint-Petersburg.

Strictly speaking, multifunctional leisure centers have been around since the antique times, the classic example being the ancient thermae that combined the functions of a bathhouse, a fitness center, a library, and a club - and were the ultimate community centers in the ancient Greek and Roman cultures. The idea was reborn in the late XIX century, in the widespread democratic trend, when in Russia, just as in a number of European countries, people's houses, educational clubs, and other similar establishments started to appear. After the Great October Socialist Revolution, these clubs found their place in the new system of the Soviet Russia - but they also thrived in the capitalist countries as well. The USSR started building youth leisure centers around the 1950's - 1960's. Today, the reasons for building such centers are pretty much the same: to divert the young people and teenagers from the corruptive influence and to channel their young energy in the positive direction. One of such centers that were built as part of a public and private partnership program, has recently been opened in the Primorsky district of Saint-Petersburg. The place where the new youth leisure center is situated is a typical example of a sleeping-belt neighborhood where everything is measured by the scale of the highway and the speed of the car that's tearing down this highway. The new compact building stands out against the background of the fractured multistory façades with its avant-garde forms and red inlays. In the perspective of the Bogatyrsky Avenue and the Yakhtennaya Street, it is perceived as a pristine modernist "box" that refers us to the early Corbusier prototypes. At the same time, the façade that overlooks the amorphous territory between the youth center and the OK chain store is designed in quite a representable fashion, in full accordance with the rules of the classic tripartite composition, though still in a modern key. The main surface of the façade is framed by two projections of the staircases. In the center, there is a modern awning above an open-air stage. Thanks to this open-air stage with an inviting portico, the building is included into the public territory: one can listen here to summer concerts, go rollerblading or skateboarding or just hang out with one's friends. The side façades are asymmetrical; the sturdy centralized composition gives way here to a gradual motion in the direction of rising-height projections. Shifted off-center, the main entrance is situated from the Yakhtennaya Street side, and is marked by a bold bulge of an original red-brick portal. Just like the awning above the open-air stage, its exposed metallic skeleton is designed in an avant-grade style. An important plastique accept is the open galleries with simple cylindrical columns on the ground level. 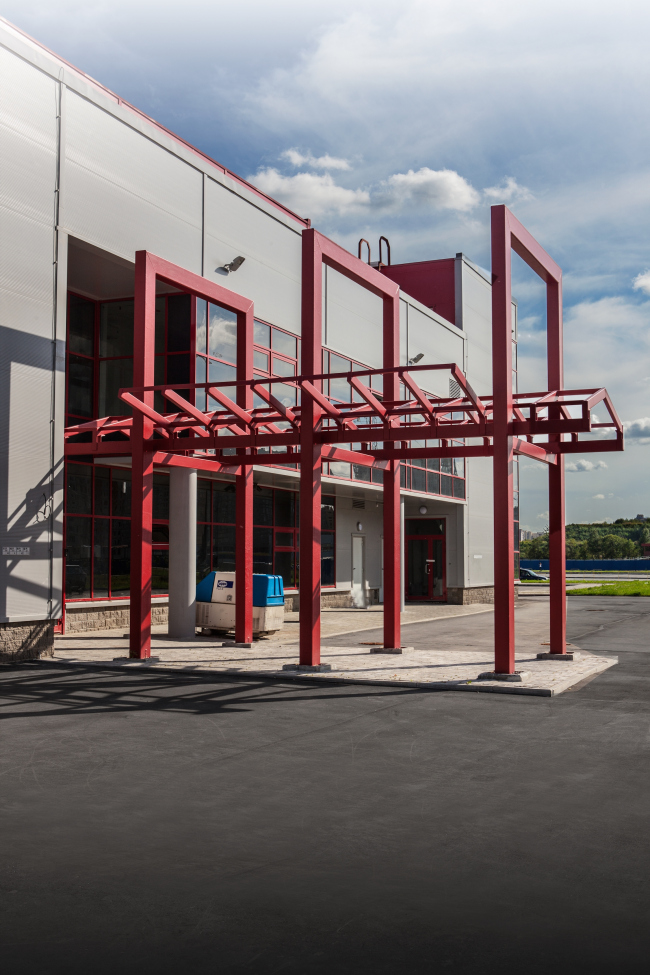 The first floor includes a rehearsal studio, rooms for various hobby clubs, and the management and administration offices that are grouped around the central entrance zone. The nucleus of the composition is an auditorium for two hundred people on the second floor. Its red box towers over the main gray body of the building, creating a characteristic modernist silhouette. The auditorium is preceded by an exhibition hall; its perimeter is skirted by a gym, a computer class, and other rooms. "Working on this project was quite a challenge because of its extremely constrained budget - shares the leader of the author team, Anatoly Stolyarchuk - Regretfully, we were not commissioned to do the interiors; it took two long years to decorate the premises. However, we still felt a sense of moral satisfaction because the purpose of our work was indeed a noble one - we were after providing our youth with a decent venue where young people could self-realize, choose a hobby appealing to them, instead of hanging around the backstreets doing drugs. Later on, the department of architecture of the Ilia Repin Institute approved this theme as the term project for the fourth year students. The boys and girls came up with such interesting versions of the project that the only this that was left for us to do was feel sorry that the budgets are so low for such socially important projects, and feel a white envy for the creative imagination of our students. On the other side, when you are locked in some narrow constraints, they sometimes help you mobilize your creative juices and ultimately find the optimum solution".

Concurrently with the youth center on the Bogatyrsky Avenue, Anatoly Stolyarchuk studio worked on an analogous project in the Kransogvardeisky District (Peredovikov Street, 16, bld 2) with a similar voluminous solution, that is also waiting to be opened. Considering the importance of the problem, it makes sense organizing open competitions for the best solutions of youth centers (individual or for duplicable use) as part of that same task of attaching the young people to full-fledged creative life. Possibly, these could be not only contests for the voluminous solutions but also for the integrated functional concept of creating and placing such centers - with sociological polls and statistic surveys. Quite questionable is the location of the youth center that the city authorities inevitably place next to a giant supermarket - which bastardizes the very idea of a city community center. The amorphous asphalt wasteland partly occupied by a parking lot is not yet a square. Upon a broader look, this problem leads to the necessity of revising of the very concept of local centers of the sleeping belts as such.

This, however, is theory. For now, coated with cheap decorative panels and surrounded by asphalt fields, the youth clubs are ready to welcome our children with what architectural hospitality is available to them... 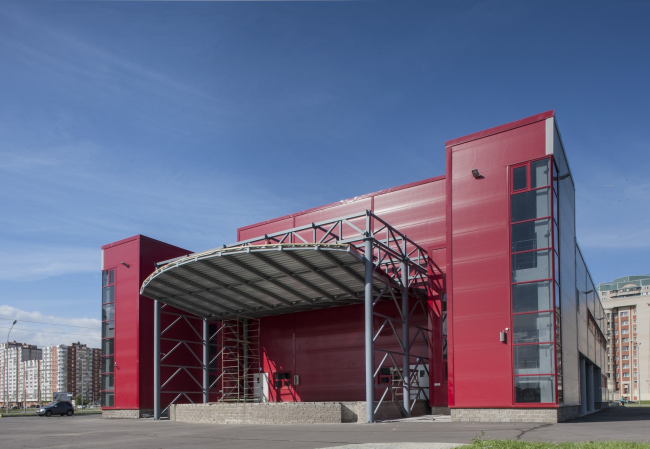 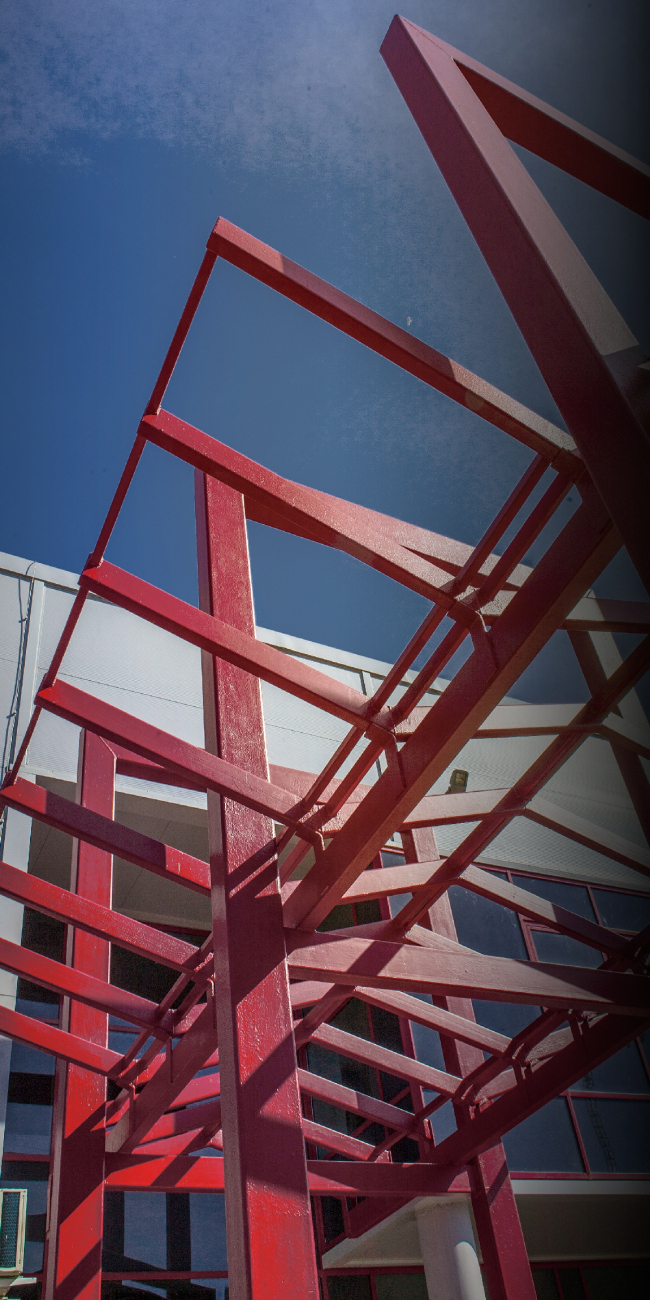