A City of Light Difficulties stimulate creative thought, and the most interesting solutions are born in particularly difficult situations – probably every practicing architect is familiar with these postulates. A residential complex, designed by Sergey Estrin Architects within a closed competition for one of the quiet districts of Moscow, presents wonderful proof of these facts. The task was to build a block of flats to be populated rather densely, on a small lot of a bit less than half a hectare, densely surrounded on all sides with five-story buildings – the client expected to place 8 000 m2 of residential space here, plus rental areas on the ground floor. Perhaps, if it were to be implemented in the middle of nowhere, even on such a small land plot, the architects would “get off easy” by building a tower or a rectangular volume along the perimeter of the allotted land. But then there would be no unique sculpturesque image, developed by the project authors. It was not about the necessity of visual compliance with the context – it was the technical standards that made the authors go along the path of most resistance, and first of all provision of the necessary insolation level both for the new construction, and the neighboring houses, according to the current SanPiNs. Any building, which would rise higher, than three floors, would overshadow the existing houses around the lot. The client provided the authors with an insolation map, which they checked with while planning.

Concept of the residential development in Moscow. Development of the forms. Project, 2016 © Sergey Estrin Architects

The way the volume was born can be seen in the infographics: having chosen the optimal height of the object as the starting point, the authors started changing the minimal height based on the shadow, cast by each separate segment on the near houses in different hours. The same applies to the insolation of the building itself. Calculations were made practically for every apartment during the planning process. What they achieved, was that during the daylight hours, at a certain time each apartment obtains maximum sunlight. Interchangeably, the house is lit from all the four sides as the sun moves. As a result, it formed a complex volume with multiple cuts along its height. It was divided into two buildings with a narrow street between them. Both buildings have special diagonal offshoots in plan – it can be seen clearly when looking at the complex from the height. The cut-offs are functional roofs with terraces.

Due to the fact that the insolation conditions turned out to be different for each of the four sides, the residential complex itself came off very diverse. It reminds a gigantic art-object: if you go round it, each step will open a new view. The smallest number of stories is two, the largest – ten. Interestingly, the inner facades of the complex – the facades of those very off-shoots – are placed at a shallow angle, in order to avoid a window-to-window look. 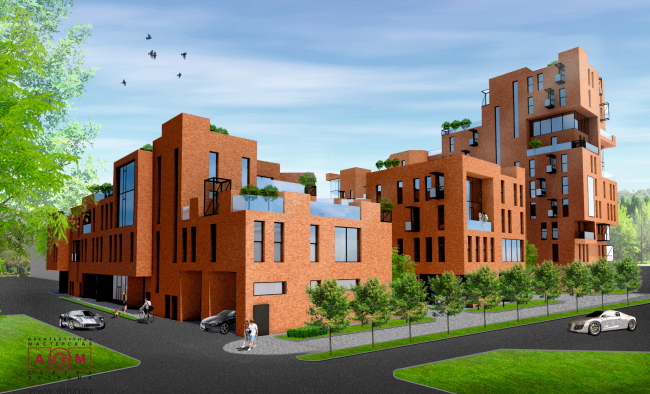 Concept of the residential development in Moscow. Plan of the 10th floor. Project, 2016 © Sergey Estrin Architects The final image of the house was created on the basis of Sergey Estrin’s graphic sketches. They remind the outlines of houses growing on the mountain slopes. Indeed, the uneven volumes, which the complex is formed of, could make such an impression. The cuts, shelves, multiple levels and terraces – all of them are attributes of compact settlements somewhere on the outskirts of Amalfi or on the Ligurian Coast. The author, however, assures that while planning the complex, he imagined a silhouette of a tiger, lying with its head up, and another, smaller tiger, lying at the feet of the first one – the cause for such associations was the embassy of one of the Far-Eastern countries near the construction site. For that matter, this complex is special exactly for that reason that its figurativeness has multiple meanings and can awaken all kinds of associations – from faint symbolic to very concrete ones. In the end, everyone chooses what is closer. Concept of the residential development in Moscow. View from the school. Sketch. Project, 2016 © Sergey Estrin Architects The buildings look especially dynamic thanks to the irregularly arranged, multiformat windows – mostly rather narrow and outstretched, but in some places – on the contrary – horizontally oriented, and in both cases reminding loopholes. An important accenting role is played by the large floor-to-ceiling screen windows, covering two floors at a time, sometimes with balconies (even though behind them are not duplexes, but ordinary apartments, separated with ceilings). Seaming randomness of placement and irregularity – these devices awaken various associations with a spontaneous, historically forming development, though at the same time we understand that the complex has been designed and built at one time. But the architects definitely managed to achieve an image of a psychologically and physically comfortable man-proportionate environment.

At the same time, the authors of the project did not want to exaggerate the effect of spontaneousness, and did not aim to create an impression, that the complex looks like a group of different volumes closely put together. That is why the architects underlined the unity of the elements: all the facades are faced with red brick. Suspended ventilated facades of solid brick fit wonderfully with the surrounding red-brick five-story houses. The complex is visually perceived as a whole, but does not seem a monolith, it does not suppress the view. It conveys the feeling of a comfortable urban environment, and not only in the yard, but also on the upper terraces of the apartments – they are small squares of a medieval city, surrounded by approaching three- and four-story houses, that are in fact – the walls of upper floors. The authors have created a cozy environment on the inner territory. It was founded on the principles of space arrangement, applied in small European towns and proven over centuries. There is a winding narrow street here, passing among the sections, with planters, green lawns, trees, benches, places for rest and communication. There are also two small inner courtyards, connected with the narrow street and the outer streets-passages on the ground floor level. Basically, it is an urban mini-system made of cozy inner courtyards and a lane with roofed passages between them. 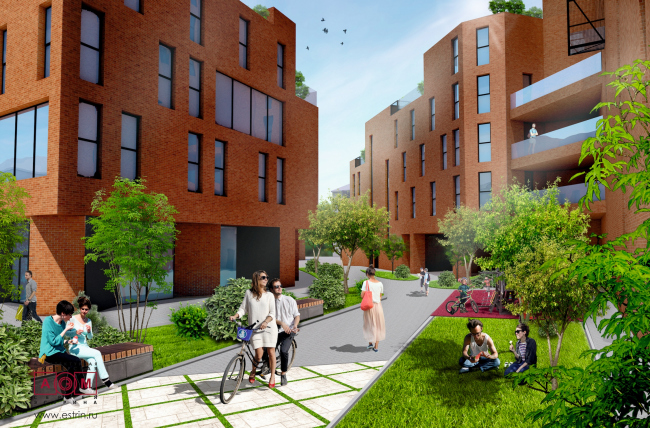 Besides the roofed passages to the inner territory, there are rental rooms for retail, services, a children’s club and a fitness center on the ground floor of both buildings. Underneath this territory is an underground garage with an entrance from the main street.

Both buildings are arranged according to a section-based principle: each section has its own entrance, bank of lifts and a minimum number of apartments per floor. According to the technical assignment, each floor has from 4 to 5 apartments. The floor plan consists of small units, as the market situation requires. Here are studio apartments of about 50 m2, two-room apartments of 65 – 70 m2 and three-room apartments of about 90 m2. Many apartments have exits to the functional roof with a terrace. Proportions of the rooms are about 1 to 1.5. There are duplexes on the top floors. 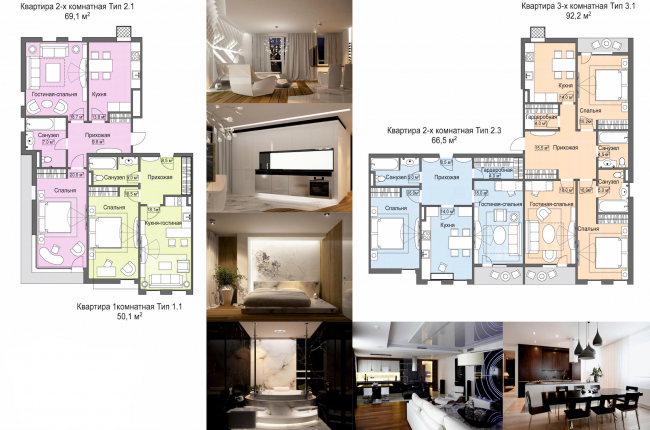 Concept of the residential development in Moscow. Examples of the apartment layouts. Project, 2016 © Sergey Estrin Architects

Any technical assignment is just a number of figures and technical data; and standards are also figures and requirements. So, by reading them, it is impossible to assume, what the creative solutions of the project authors would be. And even though the project of Sergey Estrin’s bureau did not win the contest, for the authors it has become an example to elaborate their approaches to planning in constrained conditions: a small land lot, surrounded with long formed dense development, is a place to expect the simplest and most plain answers, but the authors worked carefully with the volumes and architectural forms, and found an unusual image, however without overlooking the whole calculated background and the pragmatic side of the project.
Text by: Sergei Estrin,
Translated by Anton Mizonov