An Ornament without Prejudices

Unlike most houses belonging to the so-called elite market sector and designed in pseudo-classical style, “Residence in Vsevolozhsky” has been planned in the spirit of art deco. Since the times of the construction boom, new projects in the district of Ostozhenka – under the code-name “Golden Mile” – are fairly rare. There are almost no spare land sites left, and demolishing one of the historic monuments of 18-19 centuries set here with an incredible density has long become not as easy as it had been at the time of the Council of Ministers: then whole blocks of “slum dwelling” were replaced with new brick and even modular prefab houses.

However, as it turned out, there are still some hidden reserves: in the first lane from the center, between Ostozhenka and Prechistenka, on the territory, which two centuries ago was occupied by the mansion house of Vsevolozhskiy family, they found a building of 1980's constructed for an electric substation of an automatic telephone station, and which has been deserted in the recent years. It fell into the hands of “Leader-Invest” company which specializes in residential real estate of upper-middle class. Besides, in this case, the format was imposed by the location itself: a compact land-lot with a view on Kremlin and the surrounding architectural monuments from the 18th up to the 21st centuries. It was decided to build a clubhouse in Vsevolzhsky lane 5.

Generally speaking, the epoch when clubhouses were popular in Moscow downtown area, is already in the past. The demand for madly expensive living area in houses with no more than 30 apartments after two last crises has notably decreased. So the task of the architects of Mezonproject bureau was larger than just a design of a six-storey house with 21 apartments on a patch of land of a bit more than 0.1 hectares. On the one hand, the house had to comply with all the generally accepted standards of “elite dwelling”, and on the other – stand out from the similar buildings and possess competitive advantages. First of all, the architects provided for spaces between the new object and the firewalls of the neighboring houses. In the early 20th century, when the both neighbor-houses were built, it was decided to adjoin the houses to each other for space saving purposes, and the Soviet automatic telephone station was constructed in the same manner. In this case, it had been done differently and the architects consider that this solution will do good: “We have let the sunlight in a dark lane on the north of the building – tells Ilya Mashkov. – Now the sun will get inside through the gaps, and the building itself will make a better impression, because this way, we’ve got the end facades and used the corners to their better effect”. The second step of Mezonproject was to choose the stylistics of the future house: as it is known, developers of elite dwelling prefer more or less averaged historicism, but in this case, having dwelled upon the original variants of interpretations of more plastic modern, the architects suggested to the client ornamented art-deco. Chief architect of Moscow, Sergey Kuznetsov, supported them in this matter and noted during the consideration of the project, that richly decorated architecture is very much in the spirit of the capital. The main thing is to conform with all the stylistic canons and properly elaborate all the details.

So, the architects focused on the details. The outer walls of the building are variegated with geometric ornaments: in some places, they will be cut into surfaces of natural travertine, in others, engraved on copper sheets, and in some places, they will be encrusted in oak panels. Alongside with the unparalleled depth of the stone processing which is available thanks to modern technologies, ornamental panels of copper alloys play a great role in creating the decorative image. The architects emphasize their noble color, closer to bronze, without the reddishness. In time, they are supposed to age beautifully, turning dark and covering with patina. Decorating the framings of the windows and French balconies, these copper panels will take up 15% of the whole wall surface. “Residence in Vsevolozhsky”. Fragment of the facade with a section view © Mezonproject

Another dominating feature of the facades along the lane will be the entrance lobbies. The main entrance with the special emblem of the house hanging above the door is made slightly pushed inside, whereas the stone carved framing is, on the contrary, projected forward. On top of it, almost by the upper cornice, is another indispensable attribute of a clubhouse, besides the emblem: a copper plate with the construction year written in Roman numbers. There will also be an entrance into the underground parking garage from the side of the front façade.

It should be mentioned here that there is almost no historical art deco architecture in Moscow. Researchers compare this style with the architecture of the early Stalin period of the 1930s. Hints of art deco are found in the works of Aleksey Dushkin, in the interiors of Kropotkinskaya and Mayakovskaya metro stations, but the Moscow variant of the style is more austere, and historically quickly transfers into renaissance decoration a la Zholtovsky. The rich art deco with the use of ornaments as such (almost of any origin, for example, Egyptian or styled geometrical) gradually appeared in Moscow in 2000-s, even though not very often, due to the same orders for clubhouses.

At the same time, the authors managed to fit into the context: both the closest geographical and historical ones. Looking from Prechistenka, the rows of metal-framed three-edged bay-windows present a paraphrase of the corner protrusion of Kostyakova’s house, famous for the fact that professor Preobrazhensky bought some Krakow sausage here. The bay-windows build up a shadow of the 1910s building multiplied by six. Their purpose is to include the house into the rhythm of this small but very complete part of the city. Its predecessor, the automatic telephone station, looked completely different. And yet, its façade that appeared in the period of 80s modernism mixed with classic, in its own way reflected the wish of its authors to fit in context of the street. The rhythm of its white-stone facades was strictly vertical, and by the way, not foreign to ideas of art deco. The image was completed with a line of golden inserts in the upper part, turning the pragmatic industrial building into a jewelry box. Sure, in the 80s no one could have the opportunity to get the jewelry box idea into shape, but now, comparing the two tasks, it may seem that the clubhouse has “grown through” its predecessor, moving the dense verticals apart with its bay-windows, enriching it with metal and carving, preserving the familiarity of elevation marks and partly the color, rhythm, and the contours of the facade structure where the entrance used to be marked with a canopy, and now, has turned into a portal. This is what forms historical continuity: the residents of the house might know nothing about it, but it may be very important for the city.

The yard façade is more modest. The tall windows of two staircase risalits “open up” the steps and remind of constructivist methods; however the cutting on the framings brings us back to the ornamented style. The architects plan to arrange a winter garden in the part of the lobby adjoining the yard. This will unite the house with its little garden and partly compensate for the small size of it (600 m2): it could not be otherwise with the automatic telephone station which was classified as an industrial building. Nevertheless, according to the project, the yard will place a comfortable closed green zone that will not only offer place for the residents to walk and play with children among lawns, flowerbeds and bushes. Full-fledged play- and sports-grounds for which the given area does not suffice, will be replaced by cozy areas equipped for active recreation.

In the cold season, you will not even have to go outside: the architects preliminarily schedule a club library and a wine bar on both sides of the double-high entrance vestibule. At one point, the developer was inclined to succumb to a fashionable trend and invite a western “star” to decorate them. But eventually, it was considered that the project turns out to be quite outstanding as it is. So, the interiors of all the public areas, including the parking lot, a lounge for drivers and an animal care room, is being developed by the architects of Mezonproject – and once again, with elements of art deco. The floors in front rooms will be made of natural stone, the coffered ceiling – covered with stuccowork and the walls – with decorative plaster and stained glass a la Lalique.

3d up to 6th floor apartments will be sold undecorated: the Russian experience of working with clubhouses shows that “imposed” interiors are not very popular among potential buyers. Apartment areas vary from 100 plus to almost 250 m2. The layouts allow to buy and unite several apartments on one floor. Windows in every apartment face two or three sides, and the most impressive views can be seen from the penthouses on the top floor: here, the Conception Convent, the Cathedral of Christ the Savior and even the towers of Kremlin spread out before you.

Rare panoramas and location, flexible apartment layout, advanced vital service systems and developed infrastructure – all these features are typical for a clubhouse format. “Residence in Vsevolzhsky” can be distinguished by the effort to fit the urban environment – which has a rare integrity for Moscow – and simultaneously draw attention with its ornamental uniqueness that is meant to make the “carved jewelry box” both rich and special. This is significant for a house of this class, especially in the time of the economic recession. 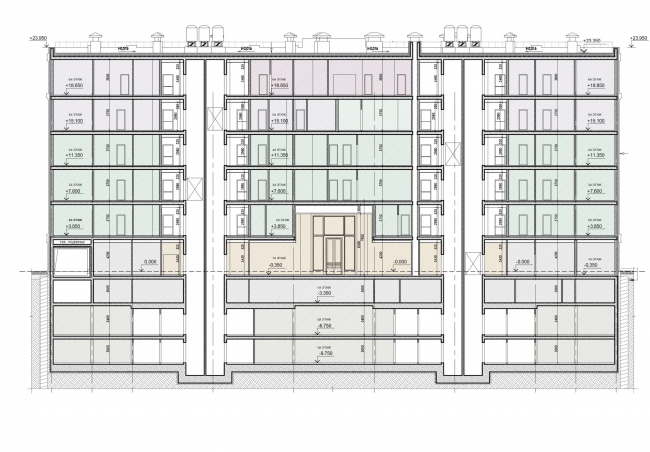