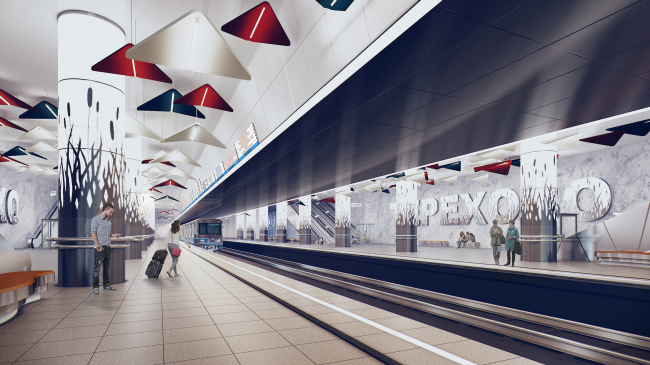 Sergey Estrin Studio developed the project of the interior of the entrance pavilion of "Terekhovo" metro station for the open architectural contest, the results of which were recently announced. The project did not get shortlisted for the finals but the ideas and solutions proposed by the architects are winning enough to be shared about.

The Mnevniki riverbed is not quite a "Moscow" place as yet. Swamped lowland, rather on the wild side, far from being a "park": fields, meadows, and two villages: Terekhovo, located in the central part of the island, still exists, while the Nizhnie Mnevniki in its northern part has long since been abandoned. The place has a wild and homeless flavor to it; it is cluttered with trash in spite of its protected status, even though there are lots of things that nostalgically remind, with a rusty flavor, about the damp and foggy mid-Russia pastoral. Meanwhile, according to the planning project of 2014, 150 out of 350 hectares of the territory will be used for construction of, among other things, residential buildings around two metro stations whose names were inherited from these two villages. Shortly, the landscape will drastically change and will look more like a megalopolis, even though it is planned to preserve at least half of the natural enclaves. In a word, the architects got down to work on the Terekhovo project keeping in mind both the past and the future of this territory.

"What we wanted to do was make an out-of-the-box and memorable project for this place - Sergey Estrin says - We wanted to catch the mood of the local commuters that get down to the metro early in the morning. We wanted to give the people an opportunity to look at themselves from the side. See the landscaped islets, think about the true values in their lives, and forget about this perpetual motion for a brief moment".

The leitmotif of the project came from the memory about the character of the place that the architects were to transform. In the lowland with a couple of semi-abandoned villages that are just about to get devoured by the huge city, one can hardly see a paragon of beauty. These parts look like they were meant to become the antithesis of high spirits: fog instead of sunshine, swampland instead of mountains, autumn instead of spring... However, the subtle Moscow suburb melancholy is something that is something that is almost palpable; some places look like autumn brings out the best in them, and this swamped lowland is definitely one of them. In the process of working on the project outline, the architects came up with the story of "Hedgehog in a Fog". This hero of a Yury Norstein cartoon is a "warm and kind recognizable character that wanders around a mysterious forest" - the architect shares. The analogy with the cartoon helped the architects find graphic shapes that were concise and visually clear. Well, we will not see the hedgehog himself in the concept - this would have been too much of a straightforward and literal solution. 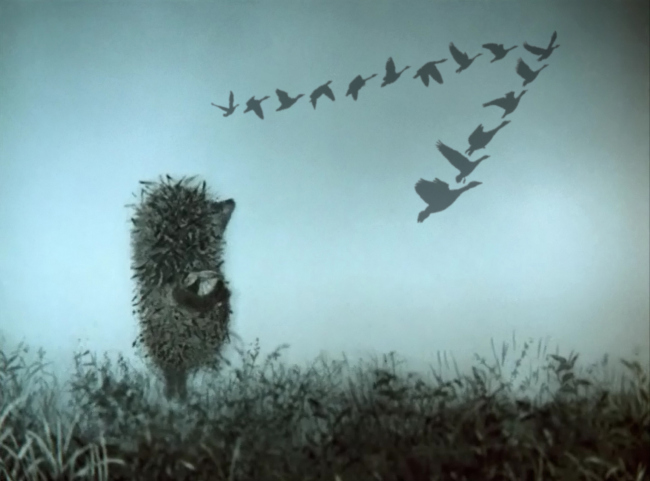 "Terekhovo" metro station. The search for the architecturaal and artistic concept. Frame from "Hedgehog in Fog" cartoon. Provided by Sergey Estrin Architects

"Terekhovo" metro station. The search for the architecturaal and artistic concept. Frames from "Hedgehog in Fog" cartoon. Provided by Sergey Estrin Architects

Borrowed from nature itself as much as from the classic cartoon, the project's main content points are the phosphorescent fog, the grass, and the birds. The recognizable silhouettes of the cattail inflorescences grew up to the size of the southern real typha on the building's columns, or maybe even bigger. Originally it was planned that the broad shafts of the columns would be made of hardened opaque glass backlit with white diodes from the inside. The cattail stems are executed from laser-cut stainless steel. The same backlit silhouettes of grass blades are superimposed over the large letters of the station's name that is still impossible to miss when looking from inside the train carriage. There is a single pair of railroad tracks running through the station, and the architects treat it as the riverbed of the conditional river: decorated with dark metal, the band of the ceiling above the trains reflects the glitter of the rails as a water surface turned upside down. In the center, there is a flow. On the sides of the riverbed, there are banks of platforms where on the glowing columns the giant cattail grows. A little bit further away from the edge of the platform, there are benches, the metal waves of their bases resembling the edges of clay bank washed up by the water. The dark-gray granite of the floor brings together all the spaces from the entrance to the platform, marking the ground surface.

The "fog" theme on the walls is picked up from the glowing columns by the light-colored marble with a mist of grayish veins. The mist is not all-too-realistic - just as the ground it is only hinted at. The exaggerated "cartoon" size of the grass blades strengthens the feeling of a game, a feeling of one being trapped inside a fantasy story - which, indeed, provokes one to look at themselves from the side: just why is the grass so big? Who am I if the grass has grown larger than me? Somebody who would hide in the corn field as a child would probably get some kind of this feeling among the graphic "thicket" of this metro station.

Unlike the recognizable cattail, the birds are stylized into voluminous silhouettes with different configurations of their wings. To this or that degree, all the lights became birds, their prototype being the duck skein, as the authors explain. The white "diamond" birds only slightly stand out from the ceiling, being inscribed into a diagonal pattern of its panels; the multicolored triangular birds, voluminous panels, resembling paragliders, and, echoing the motion of the people's flow, serve as the extra navigation elements setting the direction. The shape of birds' beaks is also suggested by the triangular lights on the moving stairs, although the authors are speaking about a different prototype: the crests of the roofs reminding of the lost villages. "Terekhovo" metro station. The area of the ticket offices and the moving stairs @Sergey Estrin Architects There is yet another bird on the outside: a big streamlined metal wing covers the glass pavilion that glows in the dark. In front of the doors, there are large backlit marquees, while on the sides, between the glass walls and the pinpoint supports of the wing, there appear spacious "cavities" with benches and bicycle stalls -the public spaces for rest and relaxation. An architect as much as an artist, Sergey Estrin have been able to tie into one cohesive story the graphics of the reeds, the plastics of the wings, and catch the resonance between the rhythm of the metro and the skein of birds of passage, between the hi-tech and the autumn blues. Modern builders make extensive use of the well-known cliché about the "underground palaces" of Moscow metro. In this project, however, instead of a palace, we see a semblance of the city of Kitezh that once went underwater: with a memory of the resonating silence of an autumn morning, so bizarre in a big city's traffic flow.
Text by: Sergei Estrin, Alla Pavlikova
Translated by Anton Mizonov 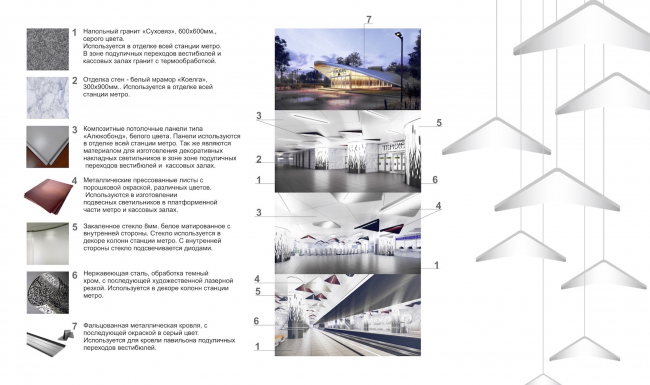