With a Slight Chinese Accent

A new aparthotel from Anatoliy Stolyarchuk studio was to appear on Tallinskaya Street, on the right bank of the Neva River. In the 1920’s, this territory – a former working suburban district – was included into the city boundaries and began its active transformation. The tone of the development is set by pre- and postwar houses of famous Leningrad architects: Grigory Simonov, Boris Rubanenko, Oleg Guryev, Viktor Fromzel and others. However, Tallinskaya Street that was started in a monumental and ceremonial style, has not acquired any particular character. It had an industrial zone of “Severny Press” plant adjoining on the south, and constructions of later periods were inferior to the Stalin-time predecessors in the sense of quality. In place of the two of them – a sauna and recreational center and a store – it was planned to build a new aparthotel. 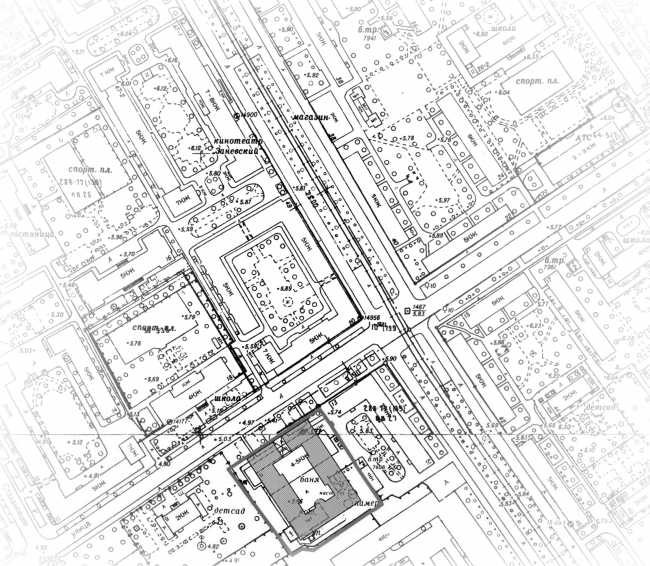 The project won in a closed tender announced by a group of Chinese companies “Hua Jen”. Later on, the project received a Golden Diploma at a St. Petersburg contest show “Architecton-2014” and a Silver Diploma at the 22nd international festival “Zodchestvo-2014”. But it never came to implementation: the customer's plans changed.

The aparthotel is in fact a 10-storey square building with an inner courtyard of 40 to 20-24 meters area. On the plan, the rectangle is close to golden section in its proportions. It faces Tallinskaya Street with its shorter side. The ground floor is scheduled for shops, apartments take up 1st up to the 8th floors and the offices are situated on the 9th floor. Another floor, underground, is occupied by the underground parking garage.

The building consists of four residential sections. The apartment areas vary from 35 to 55 m2. On the first and fifth floors, there are also rooms for the cleaning staff and laundry rooms in every section. In the corners of the courtyard, there are four staircase and elevator sections. There is a separate additional staircase and elevator blocks adjacent to each of them, closed on the residential floors and meant only for getting onto the 9th floor, to the offices. 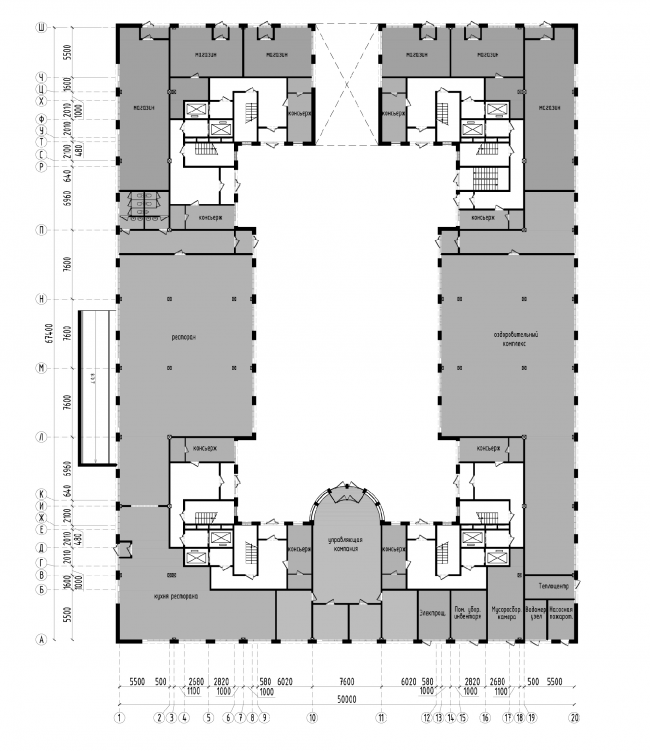 Starting from the fourth floor, the apartments have balconies that can be used as extra emergency exits. The balconies play an important accenting role on the facades: two symmetrical zones are allocated for them on the both sides of the central axis. These square inserts are decorated with red opaque glass (or aluminum) plates, whereas the main surfaces of the façade are faced with light gray stone. Beside the balcony areas, the façade divisions also includes the lower glass tier, an emphasized horizontal attic and corners accented with balconies creating together a compact and balanced composition with a certain monumentality. The main façade overlooking Tallinskaya Street is accented with a high six-storey central arch. At the bottom of the arch is the entry to the courtyard, large enough to let a fire-engine through, and its upper part is decorative, marked with stepped glass inserts in the surface of the stone facade.

However, the reserved and austere look of the building is devoid of severity, due to the favorable "compact" proportions, as well as the mentioned color accents. The latter are inspired by the image of a Chinese jewelry-box which became one of the prototypes of the project. The theme of the jewelry-box is continued in the courtyard: here, the favorite Chinese red color used in the “incrustations” on the outer side becomes prevalent. The exotic toy motif removes unnecessary functionalist severity, but does not dominate. Classical solidity can be felt in the whole appearance of the building. With its modern language, it begins an unobtrusive dialog with the historical neighbors due to the general balance of its volume, the strict symmetry, the motif of the monumental arch and the rhythmically stepping “pilasters” of the lower tier. There is also a compliment to avant-garde – two denticular rows of balconies at the corners of the building reminding Kirovsky Raisovet of Noi Trotsky and works of his teacher, Ivan Fomin, in Moscow.

The architects showed their most important quality in the project of aparthotel on Tallinskaya street: their skill to react to the context without sacrificing their own vision of the theme. Nowadays, in the meeting point of two “superstyles”, it only starts being popular.
Text by: Anatoly Stolyarchuk, Irina Bembel
Translated by Anton Mizonov