To the east from Paveletsky railroad station, in the place of the former factory there is already cleared out territory for construction of a large (112 600 sq m) business centre by the project of “Sergey Kiselyov and Partners” studio. Austere glass-brick architecture of this complex will make its 11storey volumes less marked – and at the same time it creates a high priced office space, half hidden, fenced off from motley industrial area, they has been transforming it into an office city block for a few years now

Today Paveletsky industrial area is rapidly changing its function. Business centers here grow like mushrooms after rain, though some manufactures are still there, for example the Moscow yeast factory. As office construction was prohibited in the center of capital, close location of the territory to Sadovoe Koltso stimulates the process of its development. Nevertheless, high-quality architectural environment here has not been formed yet: there are many deserted buildings, strange alleys, few greens and public spaces, constant traffic jams on main routes.

No wonder, business centre designed by “Sergey Kiselyov and Partners” in such environment reminds a fortress. The four offices and the volume of hotel are placed along perimeter of the inner yard. They are like thick walls or towers – the yard looks closed – as if the architects, having discharged from discomfort of surrounding industrial area, have created here an office oasis. In the end of cartoon “The Land Before Time” main characters happily reach not destroyed and safe valley – there is much food, plants are in blossom, and friends. And such this yard is, with a hill-garden in the middle, dining places and shops on the ground floors, surrounded by the floors designed specially for “white collars”. To the inner yard there lead the main entrances of the business centre, whereas emergency doors are focused on limiting the site external streets which still have that image of “working area”.

From the very beginning inner facades were designed mostly of glass. External facades are on the contrary originally were supposed to be made of light stone. They would “protect" the complex, developing the classical scheme close to a medieval monastery and a Renaissance palazzo: outside the wall, solid "skin", and in the yard – space of passage between "outside" and "inside". Walls of the inner yard as a rule are more open and friendly – only earlier for this purpose there were used archs and now – transparency of glass bay windows.

The second aim of use of stone on external surfaces was, possibly, more pragmatical – this material is better for construction in a city’s centre. Here are quite different restrictions come into force. According to visual and landscape analysis, the complex had appeared to be too observable for this part of the city. In Moskomarchitektura the authors were pointed at “overage of urban-planning importance” of the business centre – it was too active as a background for both Paveletskaya square and for the Troitsy Church located nearby in Kryzhovniki.

In order to lessen distortion of historical image of Paveletskaya area, the architects have covered external facades of the complex with glass screens – the huge "mirrors" to reflect the sky. They are higher than the roof, the volumes have no eaves outside – this helps to soften the border between buildings and the sky, like in a watercolor picture. Thus, at a sight from the river, from the 4th Drebenevsky lane, the background for the church in Kozhevniki is not a stone giant, but the sky – reflected sky.

It is paradoxical, but without stone facades became not less, but even more closed – only now this isolation is similar not to a fortification, but some futuristic power field. Before the brick massifs there is a smooth board – ephemeral, but proof cover lined by horizontal strips of interfloor overlappings and rhythmically verified grid of thin joints between glasses.

Here and there glass planes are unexpectedly "forced into" – as if someone opened vent sash of very large windows (there are no such really) – and on facades there appear triangle niche on the plan. As if someone, for greater picturesque view scattered watercolour shadows about the surfaces. Lines of interfloor overlappings do not support this movement, remaining constant, forming "ribs" – making think that constructions are seized by something like rigid hoops outside. This method clearly enough resembles ledges and edges of the house on Savvinskaya embankment and similar method on stone facades of the lower volume “Miraks-plaza”. But here it is more delicate and graphic, more austere – possibly, because the material is not stone, it is glass. According to the main architect of the project Vladimir Labutin, he designed these elements when noticed a detail of Ford Mustang in an automobile magazine.

Reflecting glass surface turns quite massive volumes of the business centre into a chameleon, imitating the environment – this is typical for those who defend themselves. So glass screens also can be seen as some kind of armor boards. Well, it is also like an idea of feng shui according to which mirrors do not allow to get energy from the outside. The yard is safe again. And the dark-brick facing of the lower floors adds truthiness, hinting at similarity to an old brick of factory buildings. And makes compare with another construction by “Sergey Kiselyov and Partners” (Vladimir Labutin was also the chief architect) – office building "Hermitage-plaza". There “the material basis” of the building is dressed in dark brick, and in front of the yard facade there is a glass screen reflecting the sky. There are glass planes inclined to the sky – here, on Paveletskaya, the idea is more laconic and plain, but similarity takes place. In the basis there is brick "materia", and inside, in the yard – from the dark basis there extend glass bay windows, and from the city all this is hidden by glass "board-mirror".

The only "creature" here there is no “protection” from is a car. Entrance and the exit of the two-level underground garage are organized right under the central hill. Though hardly anyone would rush there, considering presence of security at the entrance and sinuosity of ways to the yard, both from Kozhevnicheskaya street and Letnikovskaya street. Only a hotel building breaks the isolation of the office small world. On the other hand – it is already known, that the whole center will be occupied by a large foreign corporation, so “isolation in their shell” seems to be quite logical. 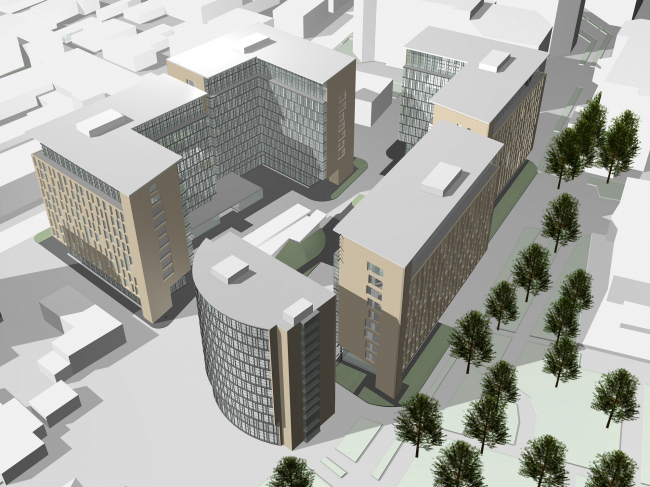 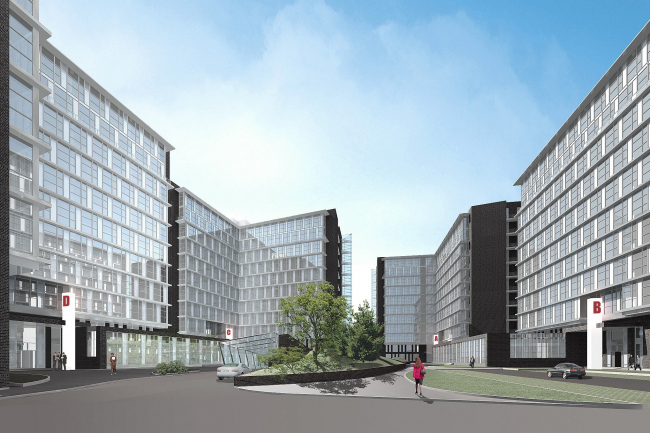 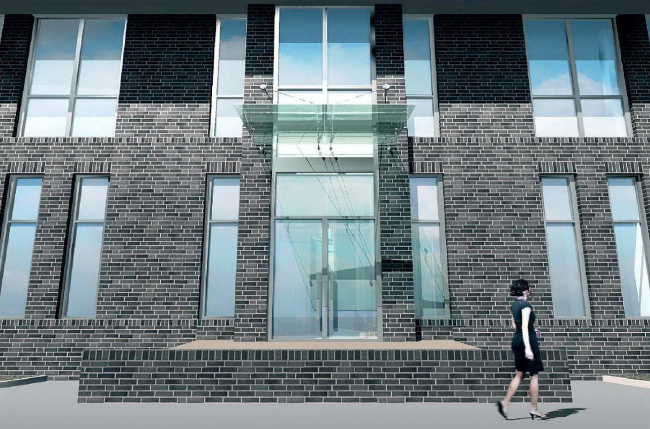