Project of Olympic training school carries on the line of schools with cheerful architecture started by board school in Kozhuhovo. This is a conglomeration of various constructions, a fan of architectural ideas – as always bright and at the same time answers the peculiarities of urban and nature environment. To bring together such dynamic architecture with the surrounding is not a simple task, but A. Asadov's studio has long been working on this city blog - forming within a specific part of Mytischy a unique – colorful – town

Territory of Sharapovsky borrow pit in Mytischy has been developed by Moscow architects for long now. First, A. Asadov's studio won tender on reconstruction the square in front of the railway station located south-east from the borrow pit. In the end the construction of the bright red retail complex was carried by the studio “Arch 4” but following Asadov’s concept. Then, by Asadov’s studio there were constructed residential complexes “Gulliver” and “Perspektiva”, more and more surrounding the large sand spot of empty area left in the place of borrow pit - a kind of bold patch within an urban space. Volume of the Olympic training school was supposed to close the “ring” of buildings. And after that Sharapovsky borrow pit is to be transformed into a new nature area.

Development which is surrounding the spot of borrow pit, responds the high white volume recently built by Rozhdestva Bogoroditsy church. The complex “Gulliver” was constructed as a huge tail of a comet, "head" of which is the church. The long, arch-curved houses is getting smaller by the church and away from it is getting higher and "bursts" with large colorful towers in the end.

The school will be the second “tail of the comet” – it will be located on the opposite from the church, from the south side. So, developing the project of school, architects of A. Asadov’s studio followed the principles they have found for this place when developing “Gulliver”: the dominant position of the church is stressed by architectural course of the "escort" - the last however is quite modest in front of the church, accentuating its whiteness by their lively colorfulness.

Olympic training school will combine general education and professional sports training, so the building has many functions and they are in various volumes. Constructions of the future school vaguely resemble layered pancake – “layers” are stretched along Novomytischinsky prospect curving the borrow pit and are pierced by cross-atriums. Deeper towards the future park form of the buildings changes – from more traditional and “classic” to natural and ecological.

First, on the line of prospect, there is building of the existing lyceum which will be saved and reconstructed, will have livelier facades - showed up pilasters, cornices and frontons. Such treatment of a typical school - almost as a "monument of architecture" – forms history of the place and enriches it with memory of the past though not that old. There will be a wooden gallery in front of the old building – the front entrance to the ensemble of school constructions, and behind it there will begin the mentioned earlier atrium - like a giant clip it joins the main buildings of the school.

The next, second building moves away from the old lyceum with wide arch as if «bestow honors" to the saved construction. Its long curved facade will be shaded with glass screen on wooden supports, it will mirror the apple garden. It is a kind of air gap, “passing space” between the building and garden - says Andrey Asadov, the head of the studio and one of the project authors. In the arch-shaped construction there will be classes for 1000 students. By its eastern end there is a long but straight residential building - it has something from constructivism: the end is rounded, green color of the bridges between windows create somewhat ribbon.

To the opposite façade of the arch-shaped building there are attached a few volumes of different forms – bigger and smaller, coveres with glazed facing tiles of bright yellow, red and blue colors. There will be a canteen, school hall, workrooms and lounge for primary school students.

Then, there is a giant stripe of green "snake" - complex of a few new sports construction united by the single roof, they smoothly “grow into the earth” from the park’s side. There will be two sports halls – for students and for future professional sport players, children and adult swimming-pools, ice rink and a large hall with tribunes for 3 500 people in a separate volume-petal. Between the “school” and “sports” parts there is an inner street, or else small garden, which is delighting with its green lawns, colorful facades and light zigzagging of the way.

Altogether there appears a school-town or school-block which sequentially but irregularly – sometimes bursting with color or forms – develops, starting with almost traditional "parterre" with apple garden to big non-liner “snake” of sports halls which wants to blend with the park. The distinctive feature is that the “town” – developed in the space between the saved old school building and phlegmatic green giant – is very bright and various. As if some “bursting” energy came out between the two poles.

The project is definitely unlike the image of a school we are used to, as rule more grave than joyful. “We were also inspired by the image of boarding school in Kozhuhovo built by “Atrium” studio, it is one of the first in Russian practice of optimistic architecture of children education establishment" – says Andrey Asadov. Really, we watch a new tendency in architecture of schools growing and developing – compound, various, bright, lively and cheerful. 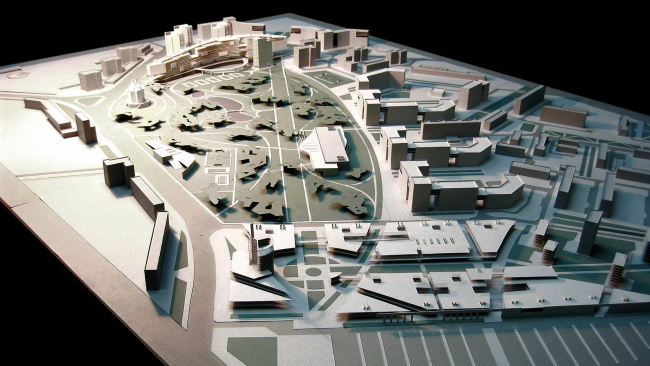 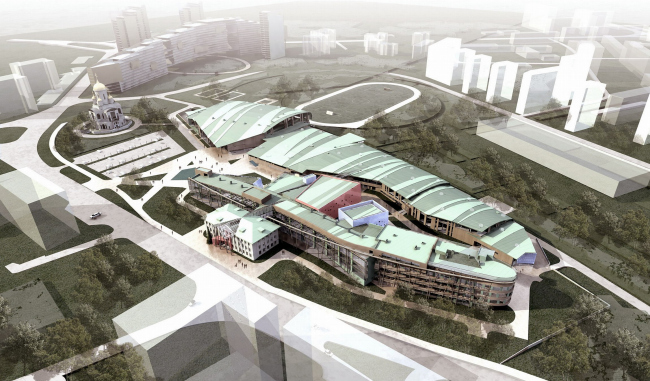 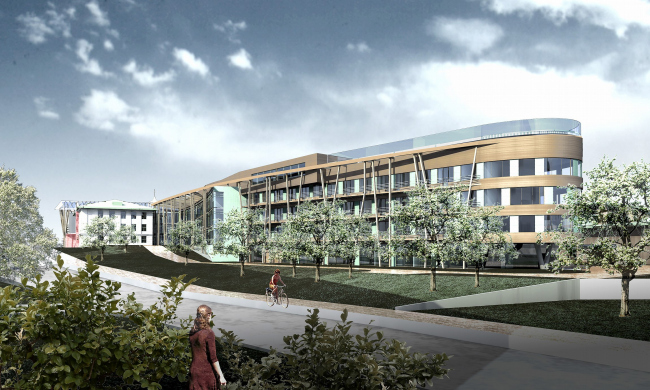