It is easy to see, few projects of Russian architects developed the theme of large scale accommodation set by curator of the recently closed Moscow biennial –much more than beautiful elite city blocks. The project presented by ICube bureau as part of “Kvartalny vopros” [City block problem] is one of the exceptions. Architects suggested a witty variant of reconstruction of panel microdistrict by building up the urban space between 1storeyed infrastructure houses

Preparing exhibition and lecture program of biennial, Bart Goldhoorn as convincing as possible tried to show how much attention give to low budget large-scale accommodation construction in the West. Well, Stefan Forster gave a fascinating lecture on how joint Germany struggles with heritage of Soviet times houses by their capital reconstruction. Russian architects presented mostly elite, but not mass projects. Well, if not taking into account the exposition by Moskomarchitektury in GTG – but aesthetics of the future mass accommodation there is so to say, we shall tell so very peculiar.

The only Russians who did the work precisely according to the theme were the architects of bureau ICube. They presented at the exhibition of “Kvartalny vopros” [City block problem] the conceptual work, entirely devoted to mass accommodation and developed specially for this exposition.

Only unlike Mr. Forster who is simply «cutting» a panel house, and then gathers it into an accurate German townhouse, in project ICube’s project the scale is larger, and for transformation of development they built up spaces between houses of new infrastructure.

For reflections over opportunities of reconstruction of a panel microdistrict the architects chose one of standard microdistricts Chertanovo. The project was named +1, this symbolizes its main idea – creation of additional “ground floor” for placing there various serving functions. It is a 1storeyed volume of complex configuration which is constructed by a house, forms small inner yards between nearby buildings – more closed, private, like in Europe.

On the plan this structure looks like a sheet paper from which they cut out many gap s, so there is a complex geometrical pattern is left. It was applied to sites of the city block with panel houses – so that "gaps" would become yard. And geometry of this structure does not repeat anywhere and all the yards have unique shapes.

As a result old panel houses get joint by the general “stylobate” or "basement" level. Though neither that, nor other definition, strictly speaking, are inapplicable to this design; houses stood on the ground and remain standing there, and basement went around them creating an effect of visual “earthening" of 9storey buildings as though they were deepened 1storey into the ground. As the “stylobate” is closely adjoins walls of houses, entrance to the yard which is in so to say private usage of dwellers goes through these new constructions. In the space of yards they reveal stretched, with totally glazed facades, a little reminding an ensemble of Pioneers palace on Vorobievy Gory in 1960, where such half-underground spaces under tribunes of stadium were used for accommodation there different clubs. Well, the comparison seems to be quite logical, considering the time of construction of the panel microdistricts being renewed. Outside, again through the ground floor there will be an entrance to the garage located on the “minus one storey” level.

The whole broad "1storey island” has roof that can be exploited. On authors’ idea, it can serve as a recreational zone, with various greenery and even gardens. There will also be “light wells”. All the spaces of “extra floors” are connected among themselves and will be used for various functions – shops, health centres, schools, nursery schools, entertaining areas and so on. Only we suppose it will not be allowed to place schools and nursery in suchlike "half-underground" area, but shops, laundry and rest service objects are real to be there.

Method of transformation of the environment in the sleeping microdistricts, suggested by ICube, looks witty and cost effective. It seems useless to expect total reconstruction of houses like in former GDR – except for maybe full repairs and renewal of facades. In that case quality of life could be affected by house infrastructure, which is minimally planned in the ground floors even at panel 9storey houses – but actually it got to old. Modern houses are already inconceivable without a “pulling”, stuffed by serving functions – and ICube decided to supply with this element the old houses, "leveling" the too old houses to the level of modern infrastructure. 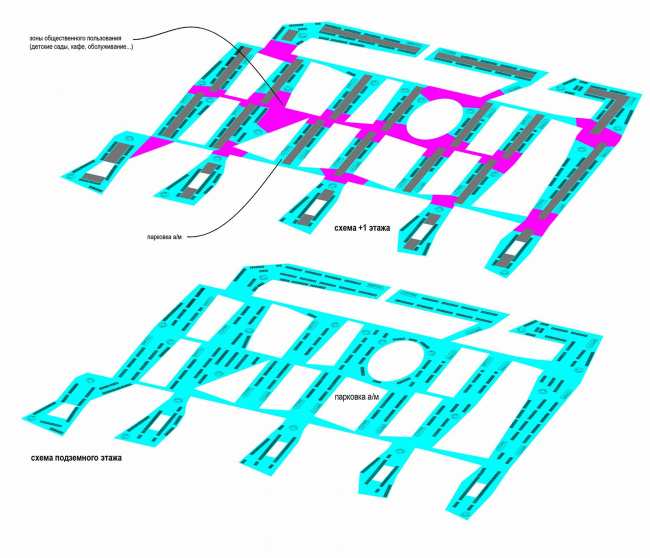